This really is too easy sometimes. Commander 2016 is available in stores and people have started to buy it in earnest. Now that players have the physical cards that come in the precons, now and only now they are starting to buy the cards that aren’t in the precons that they want for their decks. They didn’t buy them when spoilers began to trickle in and they knew Deepglow Skate was broken. They didn’t buy them when Atraxa was spoiled and they knew they were going to build some durdly planeswalker deck. They didn’t buy them when the list of the Atraxa deck was fully spoiled and they knew which cards weren’t going to be included in any of the Commander 2016 precons. They didn’t buy the cards during the two week period where everything was fully spoiled when they and everyone else was making their theoretical builds and submitting them to Tappedout so EDHREC could build their databases with everyone’s builds and tip off financiers to which cards were important. No, they waited until they had the Atraxa deck in hand, tore it open, spread the cards out – only then did they look online and exclaim “Oh my stars, look how much Doubling Season costs!” You had like a month to get The Chain Veil and only now is it spiking. The same goes for Krark-Clan Ironworks, Time Sieve and a dozen other cards we identified in this series before they went up.

I don’t think cards are done going up, either. While Atraxa and Breya are making stuff spike, I think Yidris and Kynaois/Tiro aren’t done. In fact, in the case of the latter two decks, I don’t think the cards have really started despite there being a relatively similar amount of decks registered on EDHREC. There aren’t the sexy targets like we had in Breya and Atraxa, but I still think there are cards worth talking about. So let’s talk about what Kynaois and Tiro are going to do for us.

Group Hug is an odd approach to the game. Gaining other people life, drawing them cards and developing their mana in the hopes that they will leave you alone can usually work pretty well but when it comes time to close the game out, you may find yourself  in some trouble. You may use the approach to try and help the second-strongest player kill the strongest one and then try and mop up, or you may try and play for second place. You may also just play a deck where you have a lot of symmetrical effects like Mana Flare but you take advantage of them more than the other players because you are set up to win before they do. Maybe you make everyone think you’re helping them with the extra cards they’re drawing until you deck them. What I do know is that you need to protect yourself and cards that do that are always going to be winners. 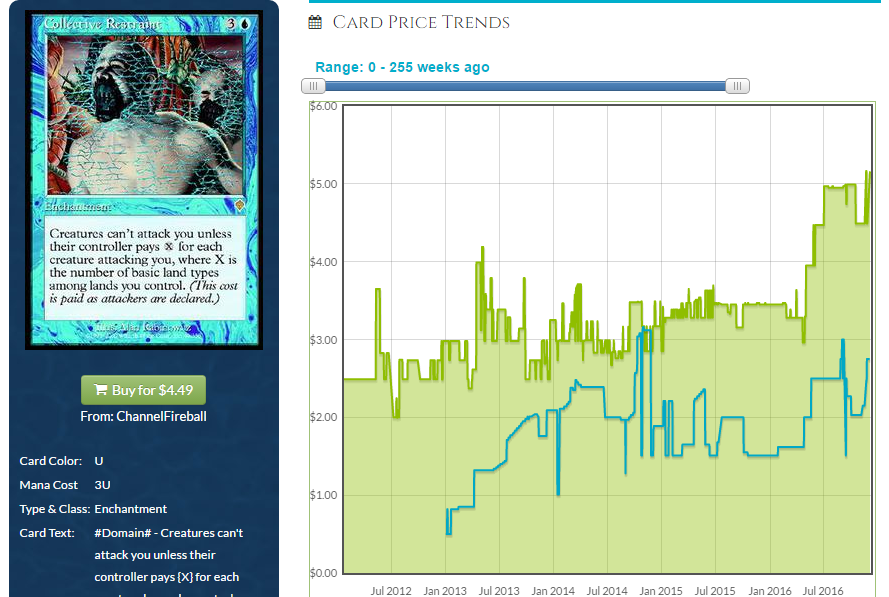 There is decent reprint risk here, I think, but I don’t really know when and where. What I do know is that this has quietly doubled over the last few years and while flashier cards that are played outside of EDH like Ghostly Prison are getting all of the attention, this card makes them pay 4 mana to attack with their creatures in the Kynaios deck and that’s two Ghostly Prisons by my count. Even at $5 I like the buy-in on this card. It’s from Invasion, a set where there are plenty of $5 uncommons. A playable rare seems pretty reasonable at $5 by comparison. Aura Shards is $8 after a commander set reprint and is uncommon from the same set. Aura Shards is also in 5 times as many EDH decks as Restraint, but I think with commander sets giving us commanders that encourage us to build enchantment cocoons, I think the gap could close. At 3 times as rare you also mitigate that demand gap a bit. I think $8 is reasonable for Restraint and if you find these under $5, I think it’s a good buy. This pairs very nicely with this deck and its strategy and also with 5 color decks. It’s almost always going to be better than Propaganda, but even if it were just a functional reprint of that card, scarcity could give it upside – look at the P3K cards that get played in EDH because they’re spare copies of staples. 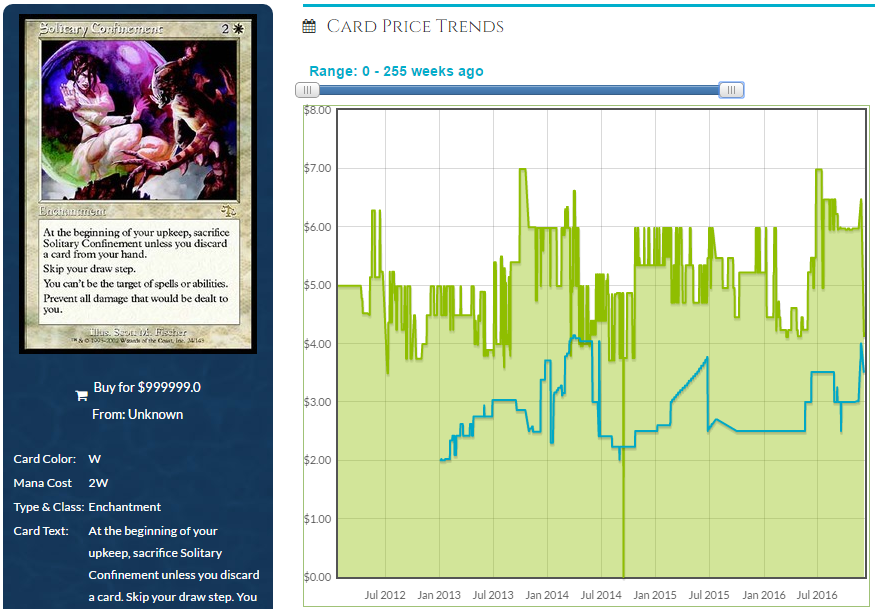 This has been flat for a minute, but perhaps there has never been a commander that let you take advantage of this card better. Since you’re drawing all sorts of extra cards, it’s negligible to skip your draw step and you never have to worry about coming up with cards to pitch to the cost to keep this shield up. There is very low supply online and the price has been flat for so long it’s unlikely to get a reprint for price reasons and it’s a bit pernicious to include in a precon. With limited reprint prospects, dwindling supply and a potential spike in demand, this seems primed to make some moves. Since it has hovered in the $4 to $5 range, the odds of this being hidden in dollar boxes seems low so it’s unlikely that a wave of discovered supply will mitigate a price increase predicated on copies disappearing from retail outlets. This protects you very well and with the extra cards you draw at your end step helping you keep this around indefinitely, especially if you’re further drawing with cards like Consecrated Sphinx. This may be a nonbo if you’re trying to deck yourself and win with this next card, but it’s certainly good at making sure you stay alive. 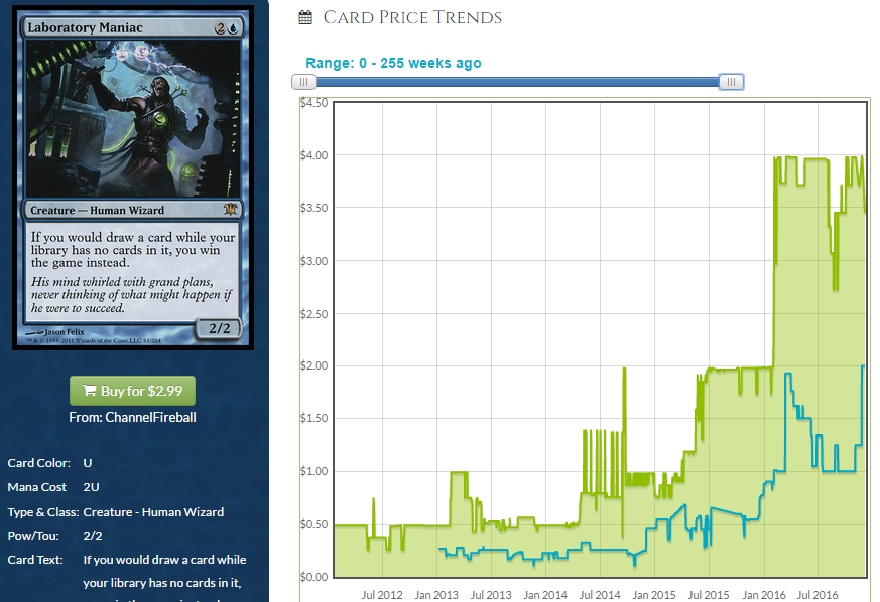 I like this about as much as I can for someone who liked this more at $2. My enthusiasm hasn’t been dampened but I won’t pretend we weren’t better off getting these at $2. Then again, I used to pull these out of bulk, so it feels good to think about this card going to $10. This card is a great way to win the game and we have already called this cheaper than it is now so we were able to make some money off of it. Can we continue to make money even if we have no copies and are buying in now for the first time? I think so. Innistrad boxes are hella expensive and this seems tricky to reprint outside of supplementary product. I think the odds are good that we have ally-color decks for Commander 2017 so if this isn’t in the Dimir deck, I expect this to spike hard then. I also think this will grow a bit before the start of C17 spoilers. I am betting money this doesn’t get reprinted, are you? The buy-in price isn’t bad right now if you are. 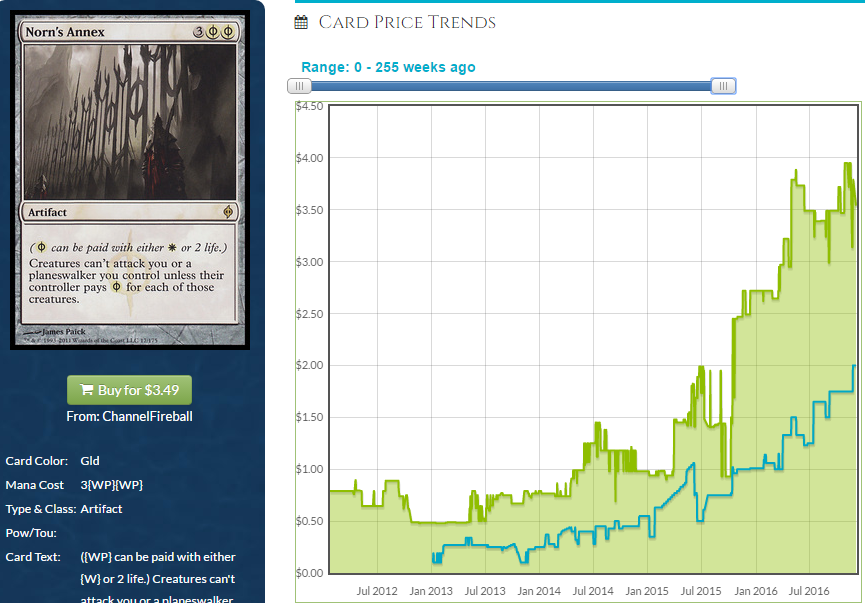 The purpose of mentioning cards I have already mentioned is severalfold. First, I want to remind you that we liked these cards in the past and they have gone up. Secondly, I want to call attention to the fact that we had a reason before to think these cards would go up and now we have another reason. That makes me think they will go up even more. Annex is in the same class as Collective Restraint. Tricky to reprint, this is also specifically references planeswalkers and is more likely to force them to pay life the more aggressive their deck is (and therefore less likely to have access to white mana). We talked about this card earlier, but for a different reason and now we’re talking about it again. Seems like a winner to me. 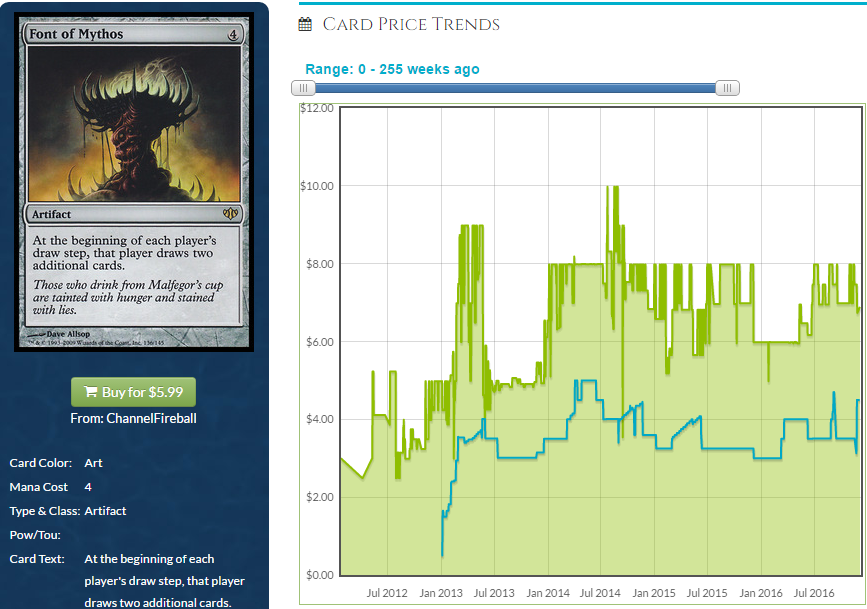 Between Leovold and Kynaios, demand for this card isn’t going down anytime soon. It’s a tad on the expensive side, but as a conflux rare, there is room for growth. It’s been enough time that copies are starting to dry up and with nothing to replace them, this card is going to grow sharply if it shakes off its current inertia. Lots of mine effects went up due to Nekusar and new demand means they could continue to grow. I am pretty enthusiastic about this one in particular, especially with how many times Temple Bell and Howling Mine have been printed. 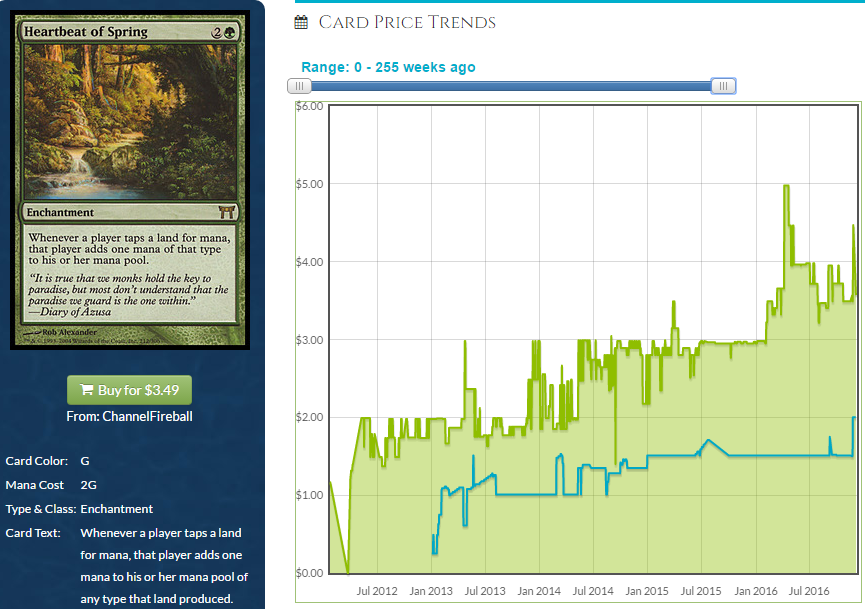 This oddly benefits from being worse than Rites of Flourishing. While Rites is on its third printing, Heartbeat has been mostly left alone to grow quietly. You’re likely to play both, especially in a redless deck with no access to cards like Mana Flare and Zhur-Taa Ancient. However, of all the new decks in the last few years, Kynaios is the most likely to want this card. Casual, 60-card players use this card a non-zero amount. I worry about this going up so quietly that copies may be squirreled away, but I feel like casuals are demanding this and ferreting out secret copies and a demand increase will likely directly correlate to an increase in price.

Whereas high-demand commanders are already spiking prices, I think there is still opportunity for the cards here. Lower-demand commanders will still nonetheless get built. People haven’t even opened the decks they’re getting as Christmas presents. There is time to get in on a lot of these cards.

One thing I caution is to not be impatient. Don’t invest money in EDH cards unless you can afford to wait a while. I recommend buying stuff to play your other formats and trying to trade it into EDH cards before they drop in price due to rotation or whatever. EDH cards hold their value longer because they are non-cyclical. Trading a Smuggler’s Copter that will be a bulk rare when it rotates into a whole big stack of Panharmonicons and Ghitapur Orrererys is going to make you feel like a genius in a year or two, and your trade partner will be happy to do it, too. If this stuff doesn’t go up immediately, DON’T PANIC. How long have people been holding onto The Chain Veil? We knew it would spike eventually and this week it finally did. It took a while, and if you bought them back when I first said it would be a $5 card soon and got impatient when they weren’t $5 within 6 months and sold out, you’re kicking yourself this week. If you took the last year to accumulate copies through trading, cheap eBay lots, SCG sales and Puca Trade, you’re happy this week. Font of Mythos may take a year or two to go up. It may take another card like Leovold getting printed to finally break its stalemate and head upward in price. The point is that we all know it can do it. If you don’t want real money tied up, find other ways to accumulate copies of EDH cards you want as specs. The whole reason we’re buying EDH cards is they go up slowly, predictably and inevitably, they’re easy to identify, easy to move and we can play with them while we wait them to go up. Patience was rewarded this week as cards like The Chain Veil finally moved and patience will be rewarded again. We called Anvil of Bogardan when Nekusar came out and it took Leovold to make it go up. Concepts are used and reused and commanders will come out in the next year or two that will create additional demand for cards that aren’t growing right now. Just remember that cards that let us cheat are always good and we’ll all make some money. If you’ll excuse me, I have to buylist a pile of Time Sieves. Until next week.