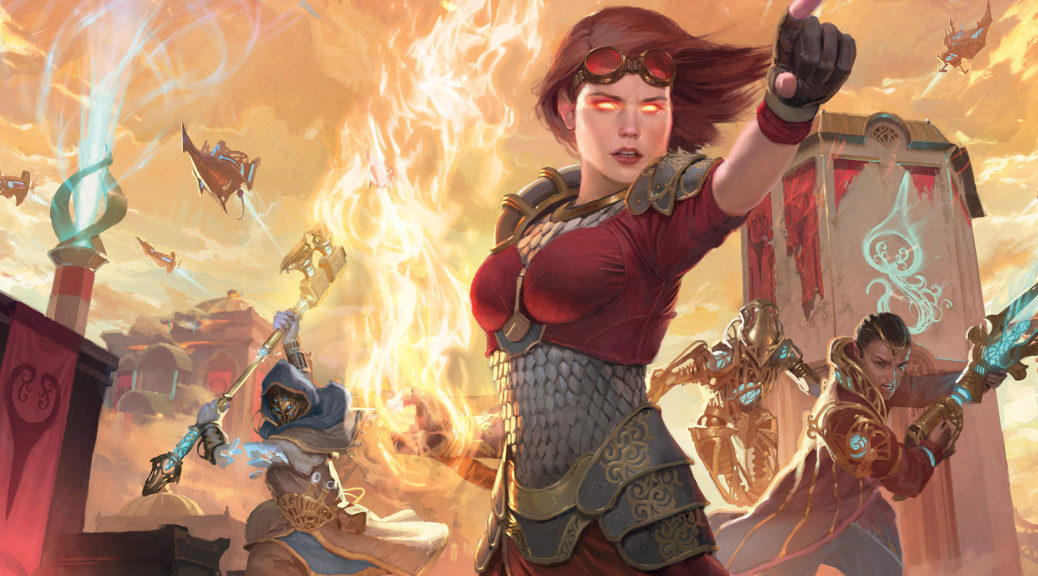 The second stop of the 2016-2017 Pro Tour season finds Standard in a pretty weird spot. Fresh off an early winter Standard scene that was heavily warped by the presence of Emrakul, the Promised End, WOTC elected to ban the Eldrazi titan along with Reflector Mage and Smuggler’s Copter in an attempt to hit the reset button and open up the field.

Unfortunately, the printing of Felidar Guardian in Aether Revolt introduced a Splinter Twin style combo to the format alongside the previously ignored Saheeli Rai, and now the format is warping alongside the combo and the GB aggro and delirium decks that seem best suited to keep pace with it.

Over in Dublin, Ireland, the best Magic players in the world have been stealth testing to answer a pressing question: facing down one of the most dangerous Standard combo decks in recent memory, can a foil be found that still has game against the rest of the field?

With over $250,000 USD on the line, and a cool $40,000 for the champ, players angling for the Top 8 will need to be both lucky and good while they pray their team has both read and answered the meta-game correctly. Taking a look at the results from the first two major Star City Games Standard tournaments including Aether Revolt, the Top 8 field has been more or less evenly dominated by GB and Jeskai Combo decks.

So far, dark horse decks striving to break out might include any of the following shells that have put up a smattering of relevant results:

As per usual, it is worth noting that the Pro Tour currently requires that players succeed in a mixed schedule of booster draft (AER – AER – KLD) and Standard play with 3 rounds of draft Friday morning Ireland time, followed by 5 rounds of Standard starting around 8am EST/5am PST, Friday.

Given the European time zone of this tournament, early morning speculation has the potential to be more successful than usual here.

Will any of the pros find a way to unlock a new archetype with game against the known field? Will a fringe deck from the early weeks of the format suddenly end up perfectly positioned to take off? Will there be a chance to get in on a must-have card that shows early promise or will the hype train leave the bandwagon speculators out in the cold without enough buyers come Monday morning?

Complicating matters this weekend is the fact that WoTC has announced that bannings can now take place at the release of a new set and five weeks later. As such, investing in cards that are most heavily played in the Saheeli Rai combo decks (including Saheeli herself) is potentially very risky. A top 8 dominated by the combo could easily get Felidar Guardian banned and result in Saheeli plunging back down towards $5. This scenario should be predisposing the financially minded to pursue cards that are likely to be in high demand with or without the Saheeli decks in the format, and especially cards that are useful in a variety of deck shells.

Saheeli Rai: Too good for Standard?

Saheeli Rai + Felidar Guardian is the pivot point for the entire format at present and anyone that can’t figure out how to beat it consistently this weekend might as well join the crowd and field some version of the deck. Both Jeskai and 4-Color builds have been doing well, with a green splash being put to good use to help find combo pieces via Oath of Nissa, ramp with Servant of the Conduit or grind value with Rogue Refiner.

So far I am finding it hard to believe that any of the pro teams will find a brand new deck that is so good against both the combo and the rest of the field that it dominates the Top 8 from nowhere. Instead I predict a Top 8 with 2-3 versions of Saheeli Combo, 2-3 versions of GB decks, 2-3 sggro decks and a perhaps a random Tier 2 deck that slipped past the ramparts. If the combo decks field 5+ versions in the Top 8, the clock for a banning will be counting down and Saheeli will likely tank as players anticipate an imminent banning. The ideal scenario for the risk takes among us is that the deck only fields 1-2 copies in the Top 8, marking it as strong, but not overwhelming and potentially allowing for some upward price motion. Once the near term ban decisions are made, another spike could be possible as well. Having already gotten in at $5 and out at $20 on this card, I’m steering well clear of this uncertainty, but do as you will.

Sure, Saheeli Rai may be hogging the spotlight, but a compelling argument can be made that beyond the combo, it’s the blue artifact creature that best defines this format. Showing up in both combo and control Jeskai variants,  Torrential Gearhulk provides tremendous value in the late game. A typical sequence might involve flashing in the ‘hulk to block and kill a threat, while flashing back an instant to kill another threat, stop an opposing combo turn, draw some cards or simply close out the game on the back of a burn spell.

This card is even seeing fringe play in Modern and I would be stunned if it didn’t make the Top 8 of this tournament. Often played as a 3 or 4 of, this ubiquitous mythic is highly unlikely to get banned in a few weeks, and could easily end up over $30 at the end of the weekend. Even if that doesn’t happen, the card has at least a year to spike again, and constitutes my top pick for the fall set mythic most likely to hit that number before rotation.  There isn’t a lot of meat left on this bone, but a playset for $88 could end up being outed at $120 minus fees, or about $105, for a $17 gain. Not amazing, but you could make worse decisions.

GB aggro and delirium decks make up 20-30% of the metagame heading into this weekend, and nearly all of those decks are running multiple copies of the second most powerful gearhulk. In coordination with Rishkar, Peema Renegade, Winding Constrictor and Walking Ballista, Verdurous Gearhulk offers ratchets up the shenanigans level on +1/+1 counters to new heights in Standard. With a supporting cast this deep on deck for the next 18 months, there is a decent chance that additional role players will appear in forthcoming sets and keep the beefiest construct in demand for the duration of it’s time in Standard. Currently priced about $6 less than his blue brethren, and with a much lower chance of being impacted negatively by a fresh round of bannings, I think that picking up a couple of play sets of this card could be in order.

Without Emrakul coming into play on Turn 5, and facing down the trigger countering abilities of Disallow with blue decks doing well, Aetherworks Marvel seems to be back on the shelf waiting to get broken all over again. I have to assume that the pros are at least attempting to make this happen, since they’re all too familiar with the power potential, but even if they don’t find it this cycle, there are several more sets forthcoming that might put this back in the spotlight in 2017. Heck, a great new Nicol Bolas planeswalker and a good discard spell might be enough to get this back in play alongside Ulamog, the Ceaseless Hunger. I’m not moving back in yet, but I’ll be ready to pull the trigger as soon as someone gives me a good reason.

I’ll leave it up to you to decide if this 5-0 Temur Marvel deck from yesterday is reason enough.

Numerous versions of the Metalwork deck have put up decent results since the fall, but the deck has so far failed to find a configuration that can consistently lay claim to Tier 1 status. Between vehicles, Sanctum of Ugin and numerous value artifacts, these decks can pull together some pretty explosive turns, and I would love to see a fresh take on this archetype make it’s way to the top tables and give this card a reason to break $5 and set up some decent action for the folks who got in closer to $1.

The first buyout of the weekend belongs to this oft-overlooked artifact, and either the pros are feeling confidant about a rogue deck choice or someone decided to go deep indeed. If the deck is real, it likely involves Aetherflux Reservoir, Paradoxical Outcome, Crush of Tentacles (a $2 mythic!) and a poor man’s storm combo in Standard that was briefly seen on camera at SCG Richmond last weekend. Something nutty with Paradox Engine (currently at $7) could also be a thing. If one or more pro teams have actually built a finely tuned killing machine around this card and they manage to Top 8 with it, the current spike may hold for long enough to get back out, but it’s much more likely that someone is going to get stuck holding a lot of $2 rares without buyers. I’m happy to stay out of this and play it safe, as peak supply for Aether Revolt is still weeks away and anything over $2 for a rare is going to be tough to make money on.

I can barely find a copy of this card for sale anywhere in North America right now. Did the pros figure out a way to break this with Inspiring Statuary and Paradox Engine? Is Tezzeret, the Schemer going to end up a thing at $13? This would be big news if true and someone is certainly making a move here. Keep in mind that even though this card is labelled as an uncommon, it is only available in the Planeswalker sealed product, and it therefore effectively a mythic rare if it is suddenly needed as a four-of in a real deck. Could this be the biggest surprise of the weekend?

Herald of Anguish: Coming Out Party?

Here we have a 5/5 flyer that can potentially be cast cheaply, force your opponent to discard and kill small creatures at will. This bad boy demon was bought out early in Japan during preview season, but has yet to put up relevant results. Now down to $7, with deep inventory that’s only getting deeper, this weekend would be an amazing time for these to suddenly start doing work on camera and drive a hard spike to $15 that would probably fade on Day 2 when it’s pilot failed to ace their draft pod and got knocked out of the tournament. A long shot for sure, but solid profit potential if someone proves this card is real.

Aether Hub: Most Popular Kid in the Class

Aether Hub is the most played non-basic land in Standard, and it’s not close. Unless Amonkhet provides some great new color fixing, this essential uncommon could end up pushing $4-5, but only if Standard play regains momentum at the local level and starts draining down inventory on what is currently a pretty deep stock. Blooming Marsh and Spirebluff Canal also have a chance to make you a few bucks/copy based on their current demand profile and their limited Modern play, though foils may be the better bet there.

Do you have an outsider pick for the tournament? Share it in the comments!

Stay tuned for round by round MTGFinance coverage of Pro Tour: Aether Revolt all weekend!