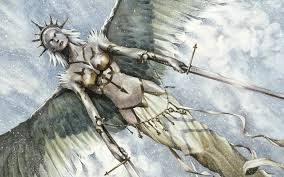 I predicted the set would be crammed with value and that a lot of the cards I predicted would be in it would be in it. In reality, the set was crammed with value and a lot of the cards I predicted would be in it were in it PLUS Tarmogoyf.  It’s kind of hard to even right now. What we can do is look at the set, understand that the EV is through the roof, supply is much higher than we’re used to seeing with a Modern Masters set (no one knows exactly how much so it’s going to be tough to predict exactly how much prices will fall and we don’t need to do that to know we should buy at the floor, anyway) and figure out which targets are juicy. For the purposes of this article, I’m going to try and isolate cards that are just predicated on EDH demand and let other people tell you what Modern and Legacy may or may not be able to affect. Modern has an actual metagame and changes to it and bannings affect entire decks. EDH bannings, an infrequent event, don’t invalidate a whole deck, merely a card. We’re looking at a stable, predictable format and we even have some historical data of EDH cards in Modern Masters sets. Let’s see what we see!

The first Modern Masters had a lot of EDH goodies in it, and some of them got smashed, especially at rare. 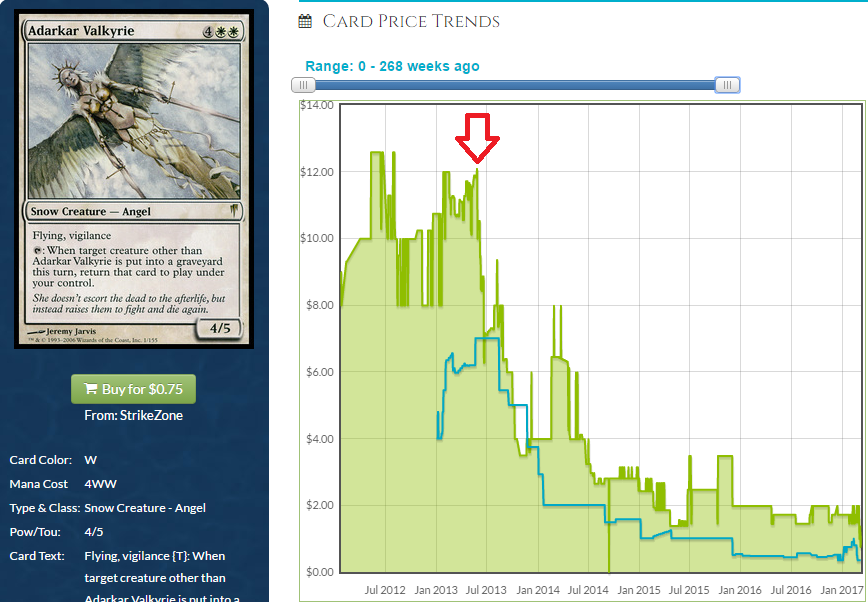 Valkyrie was about to recover and might well have done an OK job of it if not for a second reprinting in Commander 2014 a year later. Those two combined have made this a bulk rare basically in perpetuity. But not ever card was so unlucky. 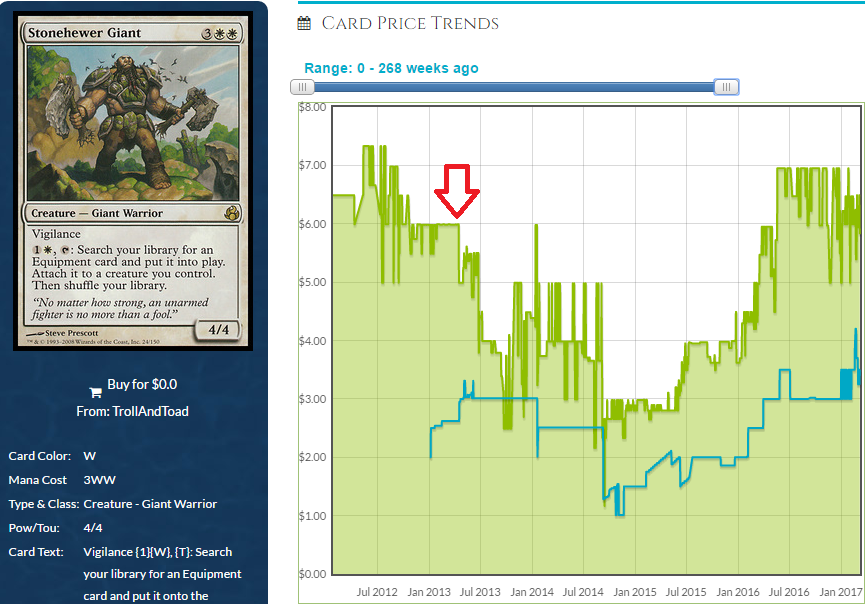 This has gotten back to its pre-reprint price. You can thank a little buoying from the renewed interest in this kind of card with the printing of the Nahiri commander deck as well as it being a nice budget alternative to Stoneforge Mystic. There’s one thing we can check that can help shine some light on the subject. 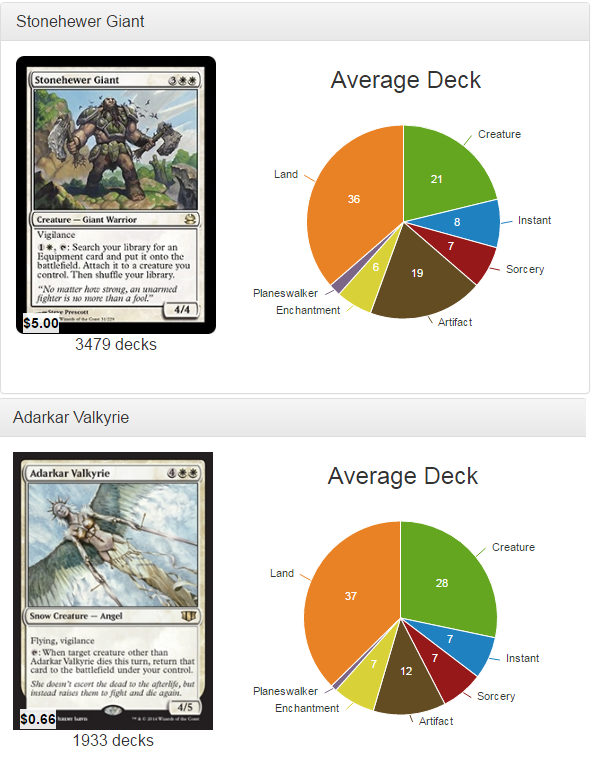 There you have it. How much a card is played can also be a factor, with Giant justifying some of its price with nearly double the inclusion. While it’s a little disingenuous to directly compare a card reprinted once with a card reprinted twice (much more aggressively the second time) we have a good idea of the factors that can affect the price so we can tell if a card is an Angel or a Giant. In this context, Angel is a bad investment doomed to stagnate for years and make you no money and Giant is a card that promises robust recovery. Giants give us those sexy, U-shaped graphs we like to see.

Let’s look at a few cards and see if they are an Angel or a Giant. 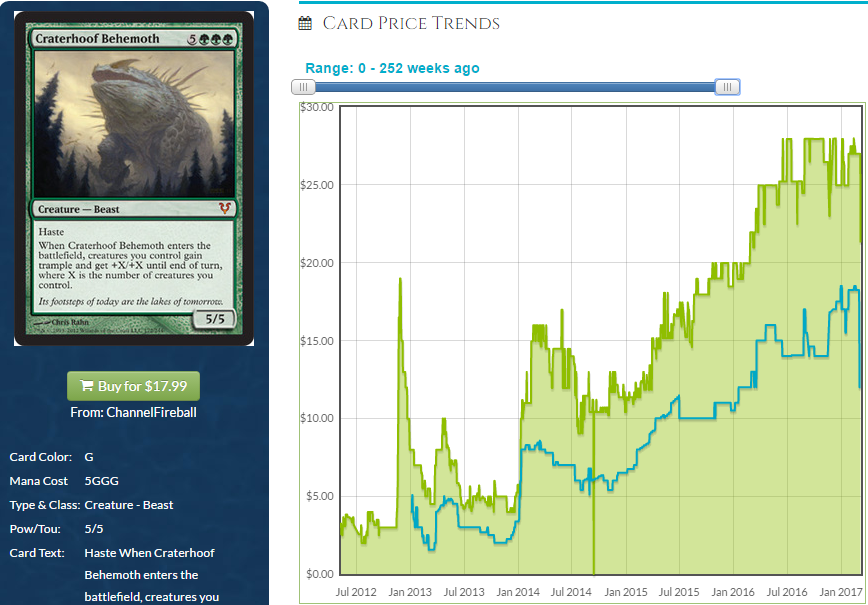 I have hopes for this card. In a lot of ways, I feel like this is a worst-case scenario sort of card. What if they print so many packs of Modern Masters 2017 that we have as many mythics as we did of Modern Masters rares? Are there cards with similar levels of adoption printed at rare in Modern Masters that could show us that Craterhoof could recover? 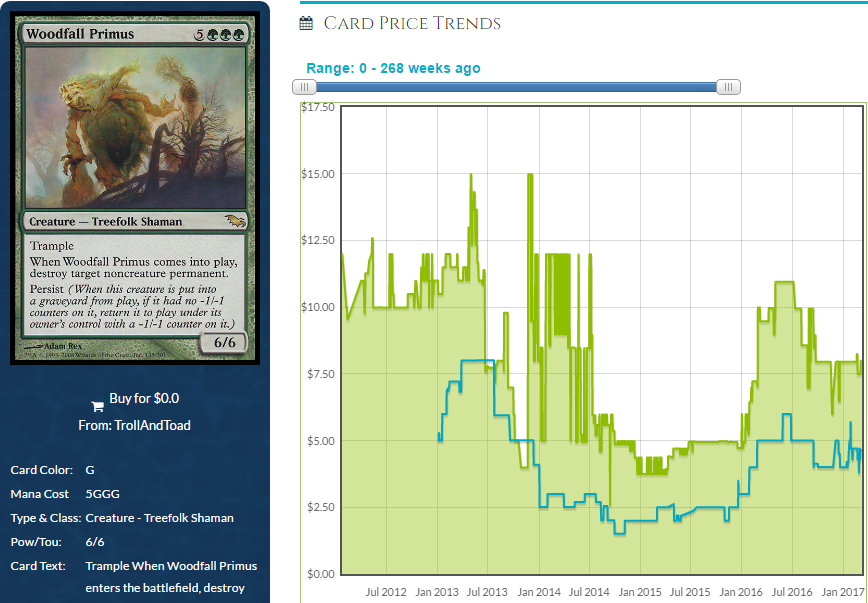 I feel like I don’t even need to put the arrow on June 2013 to show where it got reprinted – it’s very obvious. Worst-case scenario, we get so much Modern Masters 2017 that mythic is the new rare, we see Primus (4,939 EDHREC decks, to Craterhoof’s 6,779, both well above the 3,479 we saw with Stonehewer) recovering almost 100%. Craterhoof also has some Legacy implication (very minor) to help it. My hope is that Craterhoof flies under the radar a bit. Everyone will use splashier mythics like Tarmogoyf and Griselbrand and Linvala in their EV calculations and the lack of immediate demand might tank hoofy’s price a bit. I see this being a Giant under even the worst of circumstances and the more this falls, the more money we make. Will it ever be almost $30 again? I’m not sure. I think it could recover a lot more than people think, and given that it’s mythic, it’s hard to imagine there ever being enough supply to fully tank its price. Even the ugliest Modern Masters mythics don’t look that bad. 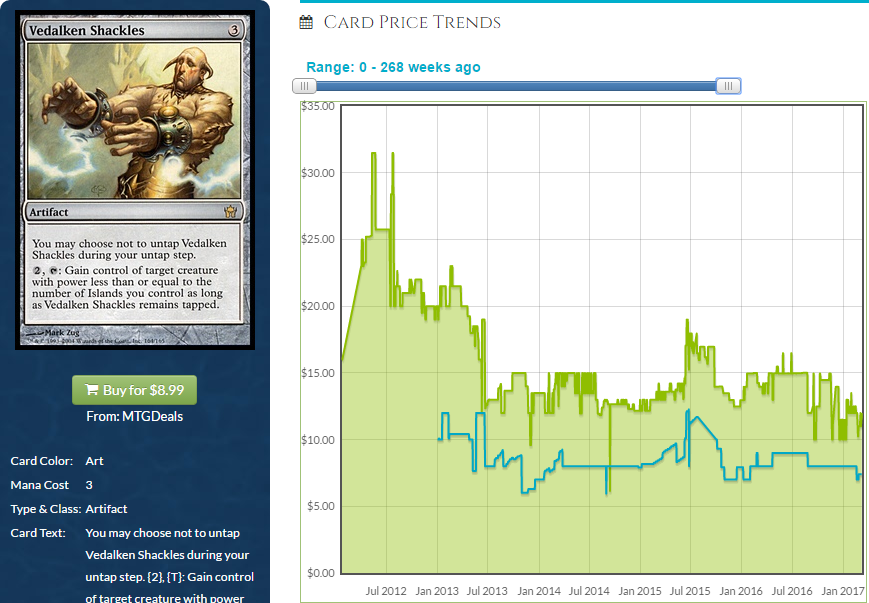 1,163 decks on EDHREC and an artificial spike from the Modern Blue Moon decks make this just about the ugliest Modern Masters mythic and there’s still hope of recovery. Craterhoof has much better bona fides than this. I’m very confident.  I’d love to be fair and show the price graph of Comet Storm but, shoot, it got another reprinting and can’t tell us anything. Darn. 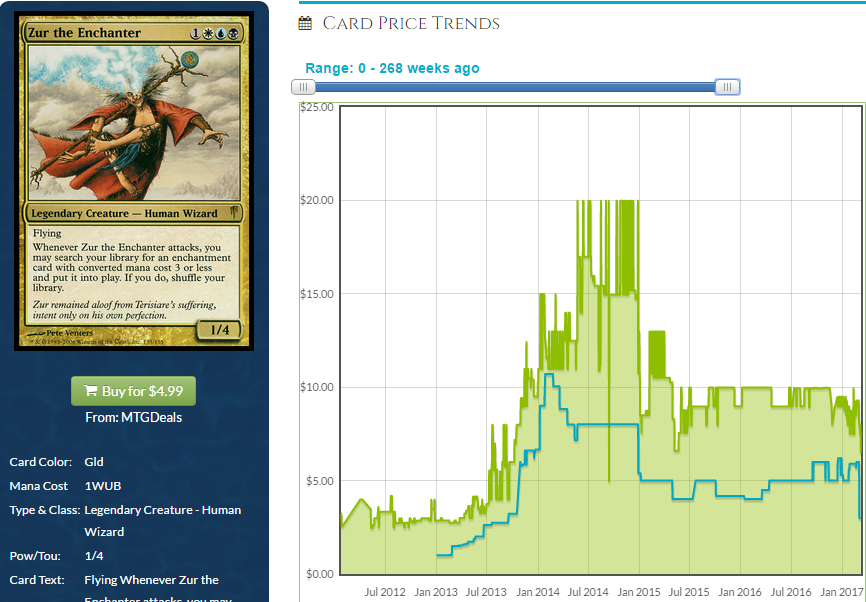 Compare Venser to a card that’s almost sure to get ground into powder. Coldsnap didn’t get opened a ton and cards like Arcum Daggson have demonstrated the ability to reach and hold some pretty lofty prices but Zur here is in for a big hit. While EDHREC numbers lie a bit (his 188 inclusions and 539 registrations as a commander [yes, it’s in more decks as a commander than inclusion] belie how popular he is in competitive and French Commander, formats where they rarely register on EDHREC but where their inclusions are even more likely to drive prices) I still think this is set to take a big hit. Being reprinted at non-mythic in a set where we’re nervous about mythics’ ability to regain ground before 2019 when we could see another reprinting is bad news bears for this card. It’s already having a tough time maintaining some of its earlier hype. I’d like to say its EDHREC numbers don’t matter because this would be a good example of counter-intuition if this were going to recover but I fear it can’t. Angel for sure. 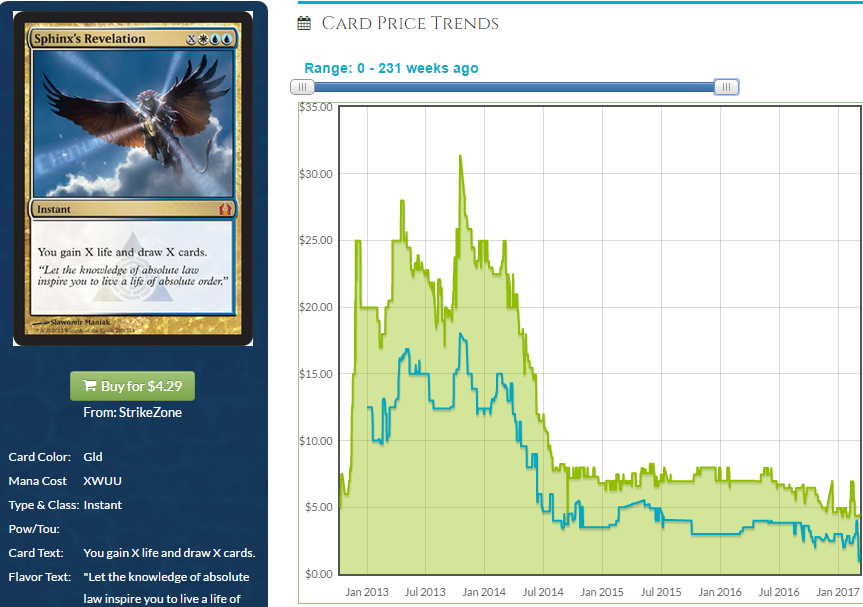 This is going to get crushed into absolute powder. It’s going to be on fire for weeks, maybe months. Here’s the thing – I think this could end up getting down to bulk mythic status. Modern doesn’t use it a ton, Legacy at all, people who started playing in the last 4 years don’t even remember how dominant it was and no one seems to be aware that this is a pretty decent EDH card with 3,871 registered decks including it. It’s Oloro gold and Oloro is a top 5 commander of all time. When this gets pulverized, and it will if non-mythic rares like Blood Moon are to maintain any of their value, this is a very good pickup. I like this at its floor, which could end up being bulk. Being able to grab these greedily for cheap is a very attractive proposition. I think its EDH numbers are strong enough to maintain a price increase from oblivion and it’s basically no-risk if this ends up in bulk mythic territory. We have to see how low this goes, first (I don’t like buying these at $2, for example) but this has the ability to rebound from completely cratering and EDH demand is enough to do that. This is an X spell that draws cards and gains life – it’s even better in EDH than it was in Standard and it absolutely warped Standard.  Giant here, provided it gets humbled enough before it begins its comeback. 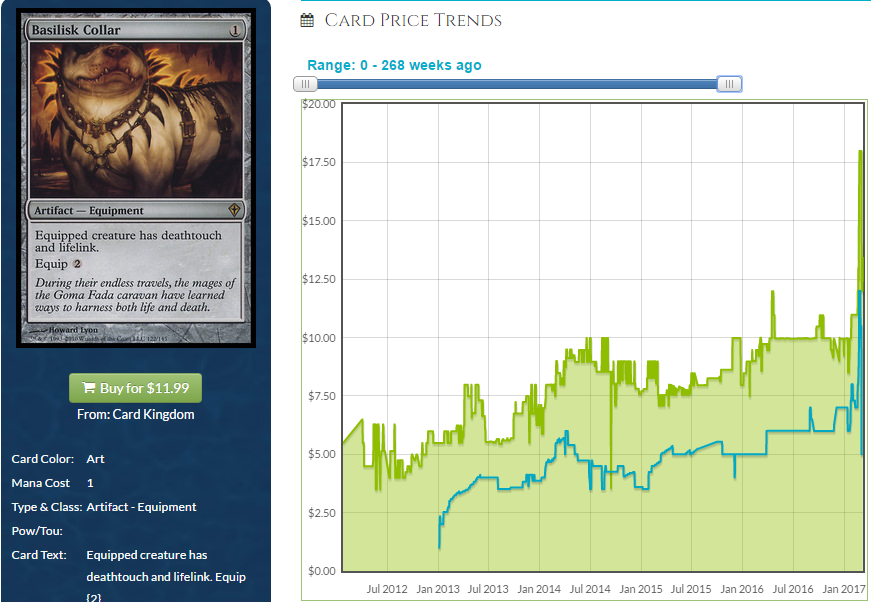 This card has had a very weird month. No sooner did people notice this was pretty keen in conjunction with Walking Ballista (the same way people made the connection with it and Inferno Titan in Standard) in Modern than it was announced as a reprint. Clearly this was a “Wow, and EDH card people love is $10? That’s not cool” reprint and not a “Let’s bring the price down because Walking Ballista spiked it too hard” because while they knew Ballista was coming, it’s unlikely they planned a Modern Masters 2017 inclusion based on a 30% increase from more Modern play. This is in 3,303 EDH decks currently and it’s stupid with commanders like Olivia Voldaren. Can this be $10 again? I think it’s possible that it can. I think this card is a good example of the concept of Hidden Demand that I talked about last week. People who weren’t super aware of this card until its Ballista application materialized will likely underestimate the power of EDH. I think the demand from EDH and its cheap price suddenly making it accessible to people who weren’t inclined to shell out $10 for a Gorgon Flail are going to surprise some people. I see a nice, U-shaped graph in this card’s future. It won’t be $13 and it might not even be $10, but if it ends up $7.50, you’re going to be glad you paid $3 for it. 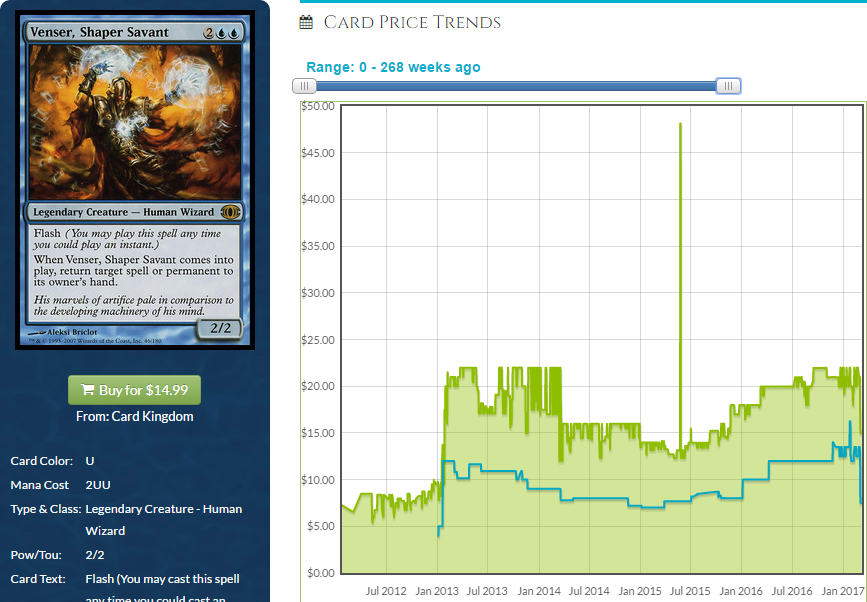 I said last week that this was something that could show us some hidden EDH demand that could trick people who think its price increases are entirely predicated on use in Modern, and in a deck that no one is really using anymore at that. EDH demand is pretty robust and is in line with the numbers we arbitrarily decided were OK for other cards – 4,434 inclusions and 56 as a commander. That’s a lot of demand that people who see this as a fossil from a Blue Moon deck that’s no longer in vogue (look at how sluggishly Vedalken Shackles is limping along after its reprinting in Modern Masters at Mythic) won’t realize is there. At 4 times the inclusion rate of Shackles, Venser is far more than some mere Blue Moon card that no one needs anymore.

I think it’s done a nice job recovering from it FTV printing. That goofy spike to $50 on the graph throws the scale off and belies the fact that its modest-looking crawl starting in mid 2015 is actually a precipitous $10 increase. That’s a very robust recovery.

Will it recover as well from a Modern Masters non-mythic printing? It’s hard to say. However, I think that while it’s going to have a tough time recovering if we’re getting as much product as people seem to indicate, it’s also going to be overlooked. I think the lack of apparent demand from competitive players will relegate this to a lower “tier” initially and its price will take a bigger hit than something like Blood Moon. That being the case, you may be able to make as much money as you would have buying something more expensive at its floor even if this card doesn’t quite reach its previous price. That is to say it may grow at a rate that’s a smaller percentage of its previous price than something like Craterhoof, but it could fall at a greater rate, also, meaning in terms of real dollars you can make as much money buying in at the floor even if it doesn’t recover to the same percentage of its initial price. Is that sentence gibberish? Tell me in the comments if that sentence is gibberish.

I’m personally pretty jazzed for this set. I really hope everything just takes a pounding and prices end up slashed because we’ve seen that a lot of these cards can recover nicely. There are a few unknowns. Will the FTV printing of Venser combined with its Modern Masters 2017 printing be as detrimental to the price as the Commander 2014 plus Modern Masters printing were to Adarkar Valkyrie? Or will the robust demand and relatively small print run of the FTV be enough to negate it? Is Venser an Angel or Giant? I’m betting he’s a Giant and I am betting money on it. There are some other very attractive targets to invest in. Next-level investors are looking at cards that have upside not having been reprinted and while that’s smart and useful (Check out James’ column tomorrow), EDH demand is strong, predictable and quantifiable. What more could you ask for?

5 thoughts on “Angels and Giants”