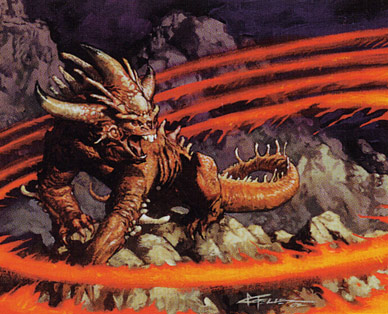 I’m doing a very good job of presenting EDH finance to people who are either antipathetic or even hostile to EDH as a format. I’m probably the best at it, and that could be because basically no one else is bothering. Whatever the case is, I’ve noticed that my accuracy rate on specs went way up when I started focusing on EDH finance a lot more because EDH is predictable. Sure, you still get the same event-based and printing-based spikes that you get with other formats, but you also get the “This is obviously going to be $5 in 2 years” stuff that other formats don’t necessarily promise. Buying stuff as bulk rares that are going to be $5 in a few years is the easiest way to make money at this and since those cards are usually obvious, why park your money anywhere else? And when I say “This bulk rare will be $5 in 2 years” I really mean stuff like that happens. 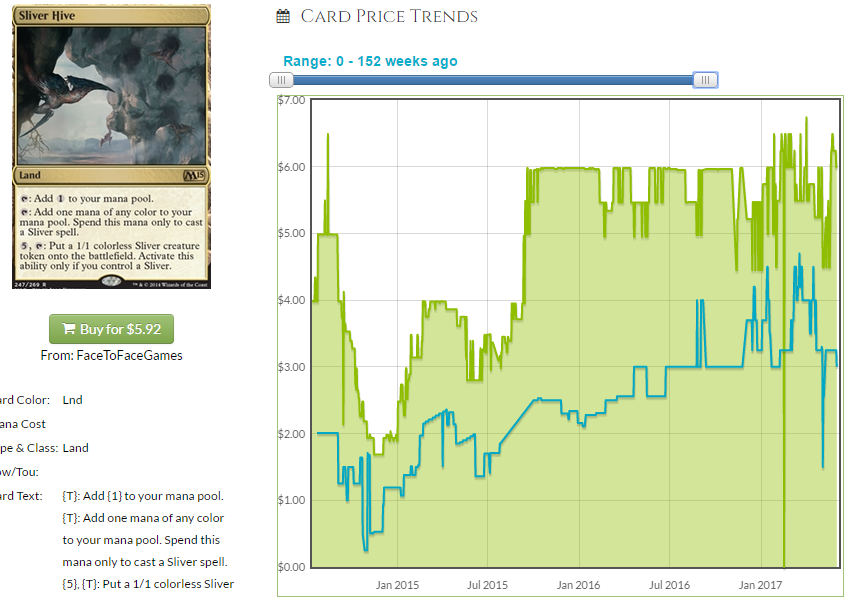 $2 isn’t exactly bulk, but it isn’t exactly the $6 it is, now. Should we sell out if we got these for cheap when they were $2? I would snap take that triple up, especially since we’ve seen that there are people out there who will spoil an entire tribal deck at a time. I think the $11 foils of this are much safer since there are several scenarios and the foil is better in most of them.

As good as that is to review before we get more spoilers, it’s not great advice for someone who doesn’t have any Sliver Hives. I’m not advocating running out and getting any right now (if you do, get the foils) but maybe there is something we can do if we don’t have cards going into spoiler season. We can wait. Waiting to park a portion of your money can be a great play and I’m going to talk about why.

Mtg Finance is opportunism, guys. It just is. We see a price discrepancy and exploit it. Or we serve customers by providing cards they need, which is still opportunism. I think there is opportunity in waiting until the last second to see if something is going to pop based on not being reprinted. The cards that make the best targets for this kind of buying are older cards that really should be getting reprinted because if they’re not, the price is going to be out of control. Remember back when we talked about how they needed to print Phyrexian Altar in Commander 2015? Remember how they didn’t? 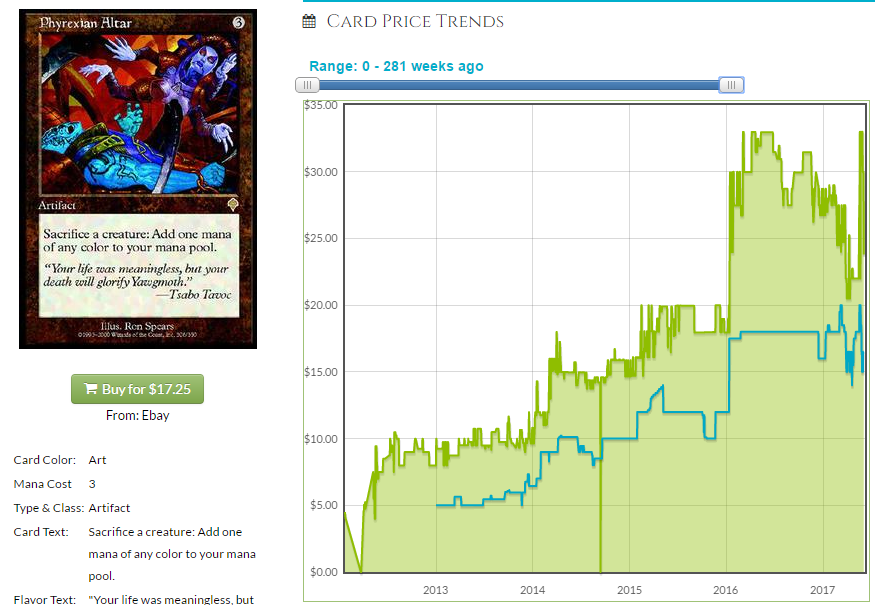 Not reprinting Phyrexian Altar when it was $15 signaled that at the very least we were in for another year of growth and people bought in. The new price is double what it was and it’s basically out of reach for a lot of people and those who need it are willing to pay the new price. If you bought these at $15, you probably feel pretty good. Now had this gotten reprinted, it would have tanked substantially. You would probably be breaking even right about now, having to wait for money sunk into a spec that was blown out. The good news is the card would have recovered in price, the bad news is you wouldn’t be able to count that as a win, and there are wins out there. 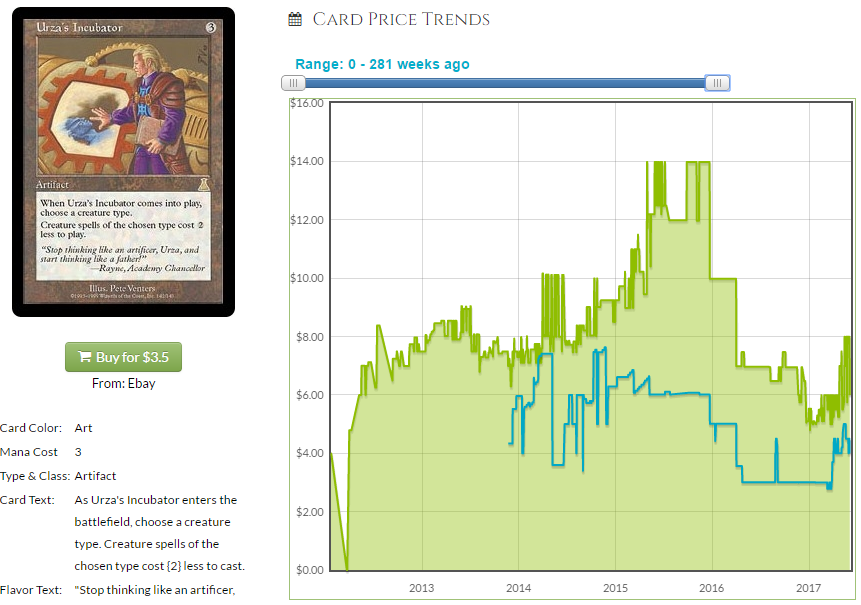 Here’s a card that was around the same price as Phyrexian Altar and got the reprint. It might recover, it might not, but it will be years before we know. So what can we learn from Phyrexian Altar, a $15 card that became $30 quickly when it wasn’t reprinted and Urza’s Incubator, a $15 card that became $5 very quickly when it was reprinted? Did the Incubator holders lose a coin flip and Altar buyers win it? I think the real lesson here is that you can wait until the spoilers are out, and you should. You’ll have time, maybe only a day, but you’ll have time to pounce on stuff that isn’t reprinted and I think I have a few excellent candidates. 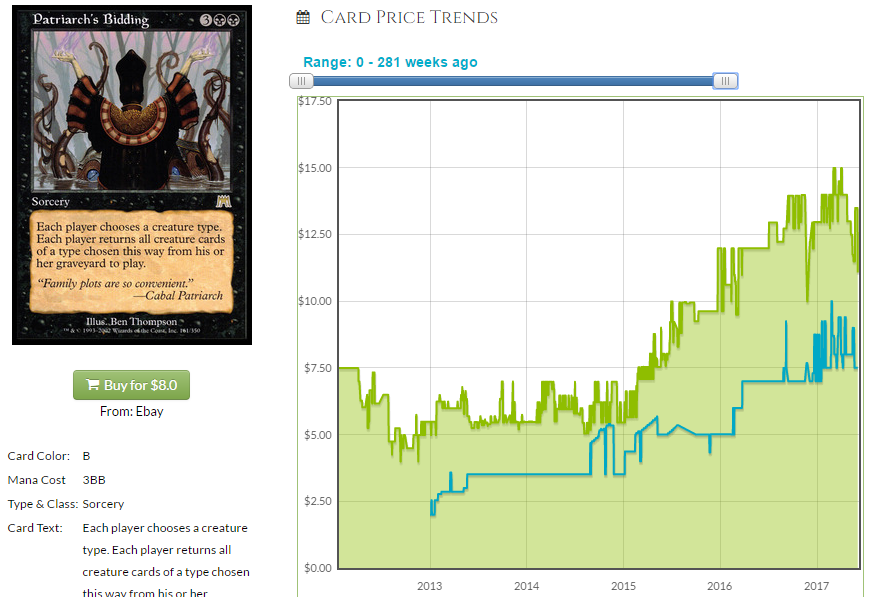 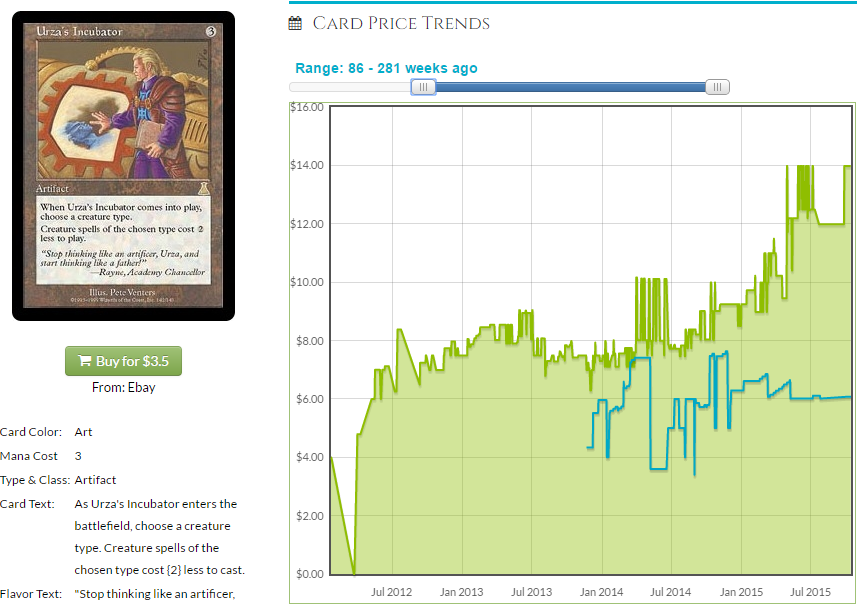 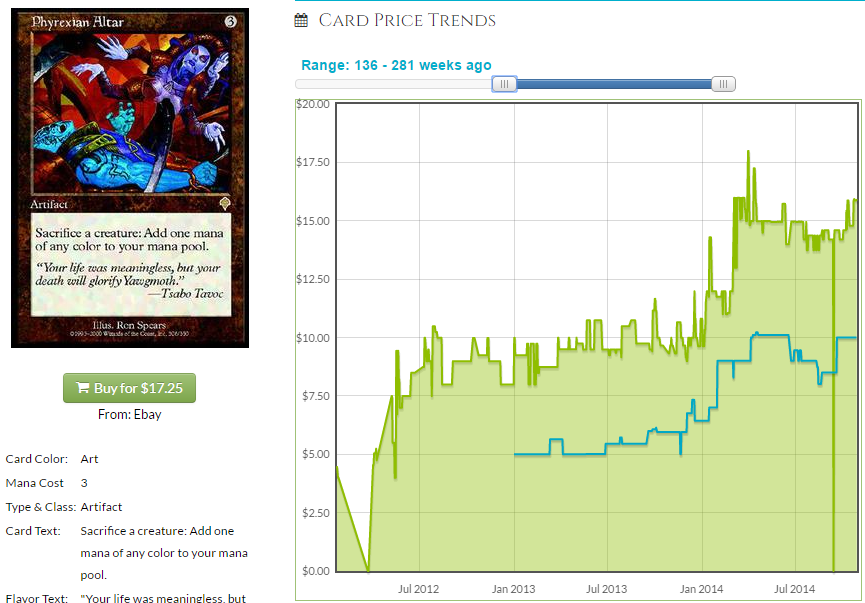 Patriarch’s Bidding looks exactly like those other two cards did right before their “do or die” moment with a reprinting one of them got and one of them didn’t. This year is Bidding’s do or die moment – will it be included in the most obvious place to reprint it or will WotC signal that they’re basically never interested in reprinting it? We get at least a year of growth and I plan to buy Bidding at $15 and sell as close to $30 as I can.

While we’re talking about bidding, how do I feel about the reprint odds? I actually don’t think they’re as good as everyone might think. I still advocate waiting, but I think they’re not likely to put Patriarch’s Bidding in C17. Why do I say that? After all, these decks are tribal. However, all of the decks are tribal, and if these decks are meant to be purchased at the same time and played against each other, Bidding is pretty terrible if everyone has tribal decks. I’m not the only one who feels this way, either. I read a Bennie Smith article awhile back and thinking about the Altar/Incubator graph shape reminded me that he has similar feelings about bidding.

Bennie thinks these “obvious” tribal cards are unlikely to be reprinted due to how symmetrical they are. Tribal cards likely to be included are ones that help your deck more than they help the other decks – think Urza’s Incubator over Patriarch’s Bidding, Belbe’s Portal over Coat of Arms, Sliver Hive over Peer Pressure.

The fact that Bidding isn’t an obvious slam dunk in C17 the way you may have thought at first means that C17 exclusion isn’t necessarily a signal that it will never be in a Commander set. However, you do get at least a year of growth and with the card likely to double in that period and grow pretty slowly or go back down a bit like Altar did, either way you’re looking to get in at $15 and get out at $30 within a year. While I think it’s unlikely that Bidding gets a reprint, I also think you can afford to wait until its inclusion or exclusion is confirmed. If you notice, there was a bit of a lag in Altar’s price spike and I think we’ll get a similar grace period this time. On the other side of the coin, I want to talk about a similar card that may be a little more likely to get reprinted than Bidding due to its asymmetry and inclusion in a lot of sliver decks, slivers being a tribe I expect to be one of the four. 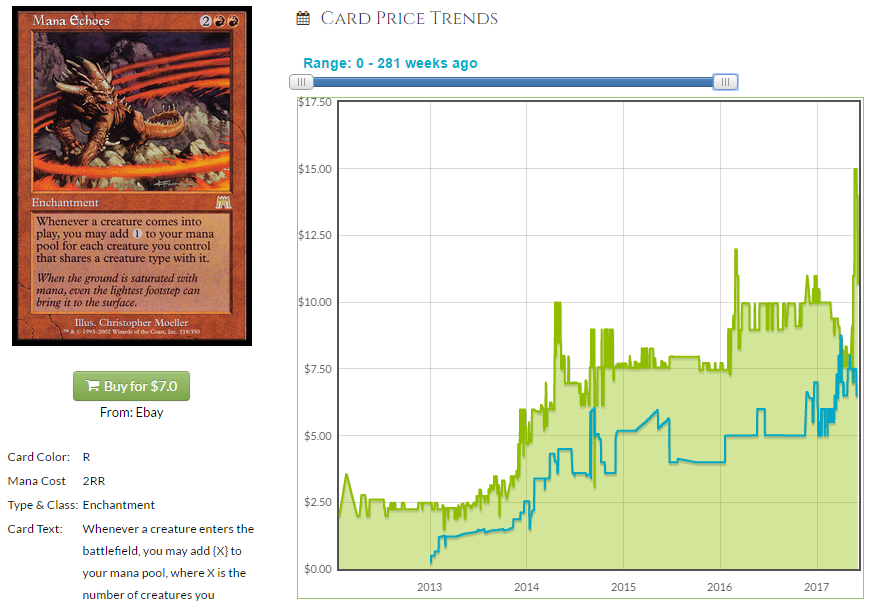 This is a card that may get jammed in the Sliver deck, but it doesn’t really matter, does it? This is an article about how we’re waiting, so if it isn’t reprinted, it’s a good idea to think about jumping on a bunch of copies of this stupid, unfair card for cheaters. This really gets out of hand, and generating all that mana is very good in a deck where you can use colorless mana to make sliver tokens. This goes infinite with Sliver Queen, a card that will not be the commander of the C17 deck (Reserved List for the win), but which maybe should be once you buy it and reconfigure stuff. Mana Echoes is not good with any other sliver commander, especially – it can help you search with Legion, I guess, but with Queen you get to go infinite. Does that mean that since Queen can’t be in the deck Mana Echoes is a safe reprint or does it mean there isn’t much point in putting it in without Queen? Here’s something to ponder – it’s the Mana Echoes EDHREC page, of course! 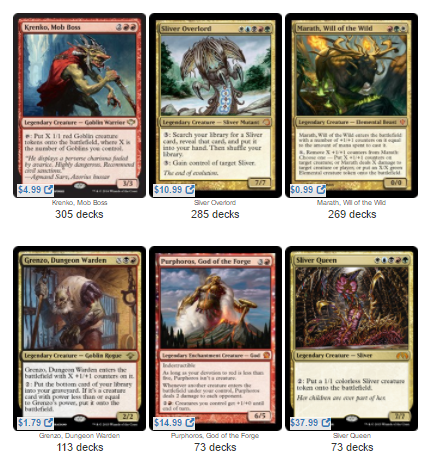 Mana Echoes is in way more Sliver Overlord decks than Sliver Queen decks, which means that although it’s more disgusting in Queen decks, it isn’t necessarily only in Queen decks and could get a reprint.

Now, if Mana Echoes doesn’t get a reprint, you can bet that the price is going up based on 4 new tribal decks, all of which I’m assuming will be 5 color until I hear otherwise, wanting to add mana to their mana pool when they play a creature. Mana Echoes could end up not in the sliver deck but still be in C17.  We don’t know that much for sure at this point but we know that much. I say watch spoilers and when Echoes is ruled out, pizzounce. 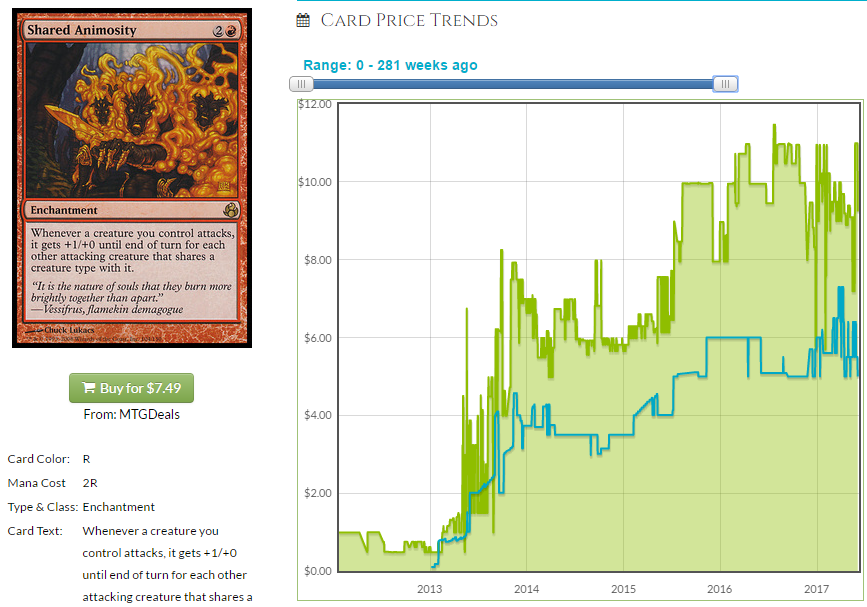 One more before I put a bow on this article. I don’t have anything insightful to say about the likelihood of a reprinting of this card the way I did about the others, but I will say that while this is played in fewer EDH decks than Mana Echoes, this does get a non-zero amount of play in other formats, which could give it more chances to spike on top of the bump it will get from C17 exclusion.

I have to imagine that’s enough value. I wouldn’t buy specs when we can wait and throw a ton of money at some of these cards that are going to pull a Phyrexian Altar for sure as soon as they’re ruled out. Wait for confirmation, buy copies, sell in a year and make it rain. This is a very easy double up and when you’re talking about $15 a card, shipping and fees hit you way less than doubling up on 100 copies of a $2 card so you’re keeping more of your profits. Next week I’m sure I’ll be inspired to write another amazing piece, but until then, read my other stuff for more EDH insight. Until then!