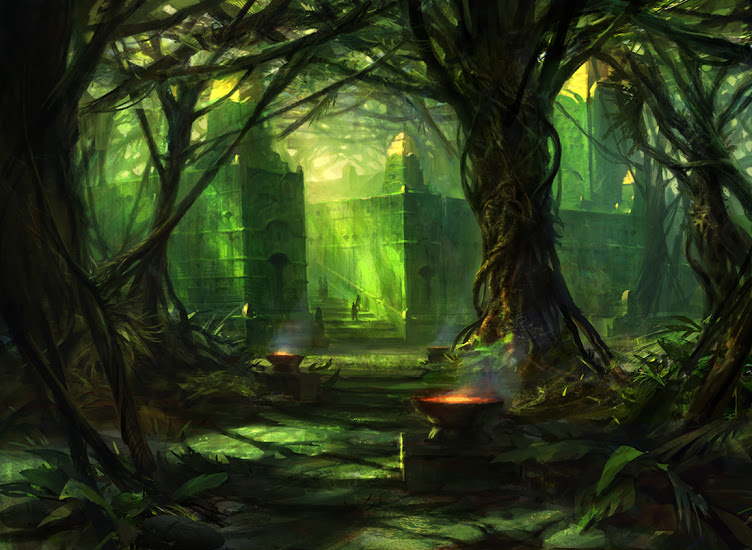 I am going to launch a bit of a sub-series here because there isn’t much to talk about this week. We don’t know much about Commander 2017 beyond the fact that we know an awful lot about one deck and nothing about the others. Everything obvious vis-a-vis Dragons has been done by everyone and the non-obvious stuff won’t pay off for months. Hour of Devastation spoilers will start in earnest soon and we’ll have some spicy EDH tech to glean from that, but for now, EDH is sort of quiet. It was with that in mind that I started screwing around on EDHREC even more and went a lot deeper.

While it’s not perfect (for example, Raging River comes up under colorless enchantments, likely due to someone outside of EDHREC’s error since the data is all scraped from elsewhere) using EDHREC reports for top cards rather than using the advanced filters (Something else I can get into if people want) or typing in the name of the card lets you eyeball something that was sort of tough to eyeball before. A while back, I was asked to write about the top 10 cards that were relevant in EDH and I did it the hard way, guessing mostly until I discovered that I could just go to a page for that. Seeing the top 100 cards in the format wasn’t super surprising, although the way the cards were ranked was. I got a lot of surprises going through the data and I enjoyed the process immensely.

I’m going to go through each color and talk about things I find surprising and which could potentially have financial consequences. I’ll probably eventually do each color and since there’s no rush on this, I’ll get to it when nothing else is going on. I think Green is going to be the sexiest one so I’m going to start with Green just so you all can pick up what I’m putting down. First of all, how do you access this by yourself?

At the top of the page, any page, click the “cards” dropdown.

Click by color and pick the color (or lack thereof) and it takes you to the page where it first lists the Top 100 over all then breaks it down into subcategories. All of this is displayed on the one page and seeing the cards sorted by percentage inclusion is great. That’s how you do this, so let’s get into what surprised me in the green stuff and what I think might be relevant.

If you had asked me to guess the Top 5 Green creatures in terms of inclusion, I would have done very well. I would have said Sakura-Tribe Elder was played most and then in no particular order, the rest of the Top 5 was Acidic Slime, Birds of Paradise, Reclamation Sage and Llanowar Elves. That’s not bad for guessing based on what I see played but I whiffed on number 1. Eternal Witness is played in an astonishing 45% of the decks on EDHREC. Sakura-Tribe Elder is in 32% and the slide really begins with Acidic Slime finishing 3rd with 27%. 45% is unreal inclusion and it shows there’s a big difference between “Beast Within (28% of decks that can include green cards) can really shrug off reprints” and “Eternal Witness can really shrug off reprints. Eternal Witness really has shrugged off reprints, too. It’s been in 3 Commander deck printings, a Duel deck and Modern Masters and maintains a healthy $6 price tag. The price cycles but it never seems like it gets truly blown out. 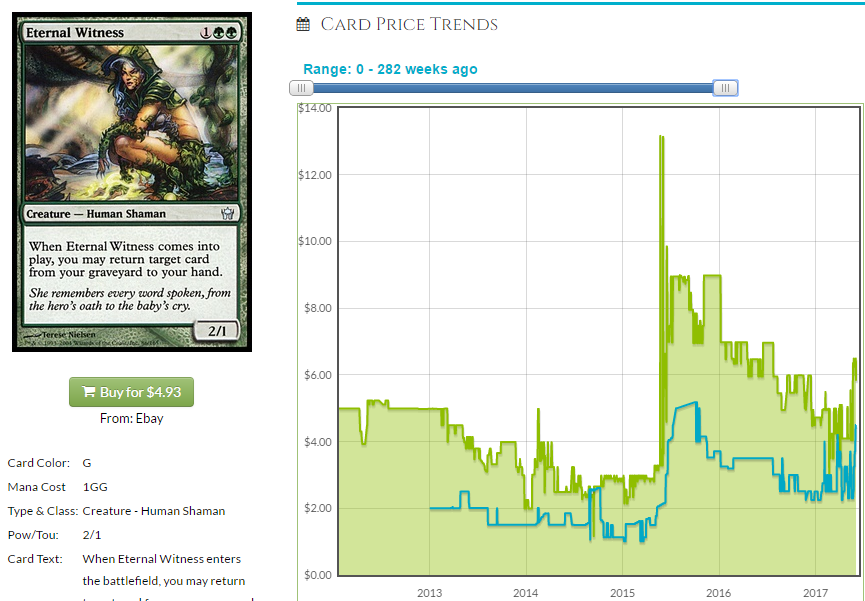 Relative inclusion has to be a metric we pay better attention to going forward. Just saying “It’s an EDH staple” is fine but it’s sort of lazy and it really obscures the truth. Lots of Green cards are “Staples” but none of them are Eternal Witness. The second-most-played card isn’t even Eternal Witness- It’s Cultivate which is played in 38% of decks (2% more than Kodama’s Reach – go figure. Guess there’s a lot of Minamo’s Meddling in their meta) and while it’s a buck, it’s not a finance juggernaut like E Wit. This is a safe buy if it’s reprinted again.

2. EDHREC Doesn’t Appear to Show Cards Being “Priced Out”

EDHREC measure what people report they’re building and that includes a non-zero number of wishlists. Unlike tournament sites which report the cards that a player managed to track down and register in their deck, EDHREC can sometimes pick up lists that people register wishing they could afford. I think this is good to note because while that is a potential weakness, we don’t see people registering a ton of decks with ABU duals in the manabase for shits and giggles – sites like Tappedout seem more like schematics than fantasy projections. If a player registers something like Oracle of Mul Daya, they’re pretty likely to pick it up. Besides, all things being equal, any $20 card will be similarly out of reach to the people who can’t afford $20 for a card so it should be a wash. They’ll register the same number of Oracles they can’t afford and Consecrated Sphinxes they can’t afford so relative demand should still be a fair metric for determining demand from within the format. There are plenty of $20+ cards in the Top 100 and while there aren’t as many people playing Vorinclex as there are playing Birds of Paradise, that says more about the latter’s ubiquity than it does the former’s affordability. It’s very likely we’re seeing the “Top 100 Green cards, money is no object” list, or damn near it. It’s not like people are lining up to play Drop of Honey but can’t because of how expensive it is. More likely people want the less obscure stuff because they’ve seen it played, know what it can do and have a reasonable chance of obtaining it. Whether or not these are the 100 “best” cards is irrelevant because we’re trying to predict what people will buy and what they’ll buy are the cards on this list.

Obviously mana matters, but when you isolate just the green cards from the rest of the cards, you really start to see how many deal with mana. EDH is a big mana format and mana thirst drives a lot of card inclusion. Green is put into decks because it can get dead stuff out of the graveyard and deal with artifacts and enchantments, but mostly it’s there for mana purposes. In the Top 100 Green cards, a whopping 38 of them, over a third (you knew that 38 was more than 33, I’m not sure why I felt compelled to put that, or leave it after I typed this, or leave this after I typed this) deal with mana. That seems obvious, but it helps more than you think. Everyone knew Sylvan Caryatid would be good and would help Standard. What we didn’t think about at the time was how EDH inclusion could help smooth the price crash out at rotation time given its inclusion in 7% of EDH decks. I used to run Utopia Tree – I knew full well we’d want Caryatid in our decks. That 7% inclusion is good enough to keep the price steady at about $2.50, which is way down from its ridiculous Standard-fueled peak of $15, but it never truly hit bulk. You can use that as a baseline to compare to future mana dorks. What if we get a creature that’s closer to Bloom Tender than it is to Caryatid? Basically every mana dork ever except pretty obscure ones are in the Top 100 Green cards and a lot more show up in the Top 48 creatures. Knowing this helps us a ton when they print new mana creatures. Did you see this being $3 and climbing? Maybe we should have. 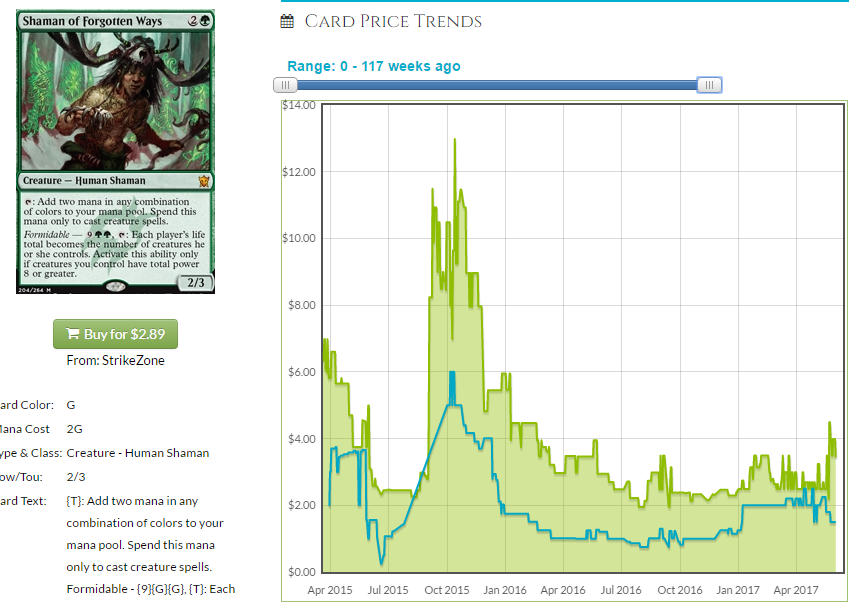 4. Bad Removal is More than OK

Green is great when coupled with other colors because Green lets other colors do what they were going to do faster. But since Green is the best color in EDH, people are going to run mono-Green decks and that means you need to run goofy removal. People love Terastodon and Woodfall Primus but they even love ways to deal with creatures like Desert Twister. Green players love Desert Twister. 6 mana isn’t a problem in EDH – what else was the Green player going to do on Turn 3? Goofy removal becomes necessary for Green decks and therefore ends up in demand. 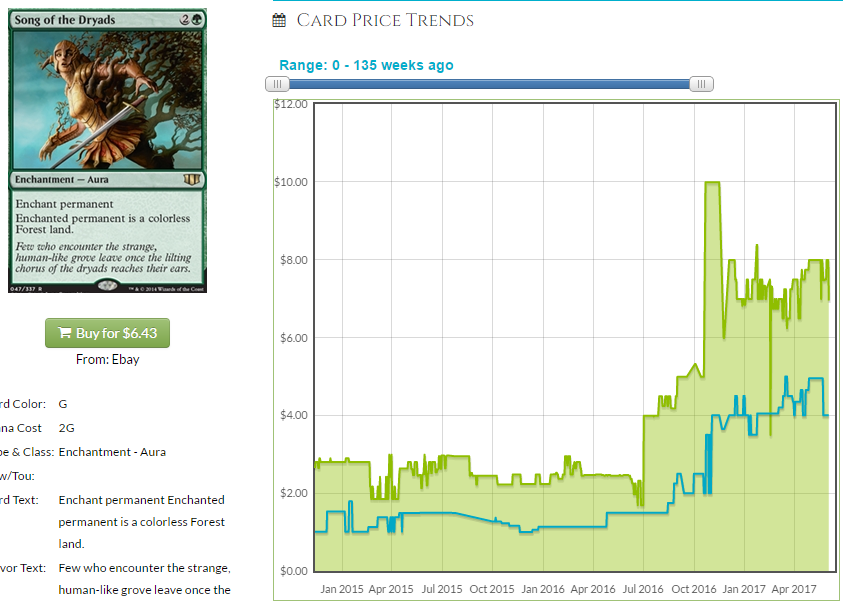 Did anyone see this happening? A really mediocre removal spell from a $35 MSRP deck that has approximately $97 worth of elves in it flirts with $10? How? Well, it may be bad, but it’s the best Green has, and sometimes you can do stupid crap like copy their creature with a Vesuva. Hey, they printed a card that’s a lot like this, didn’t they? How’s that card doing? 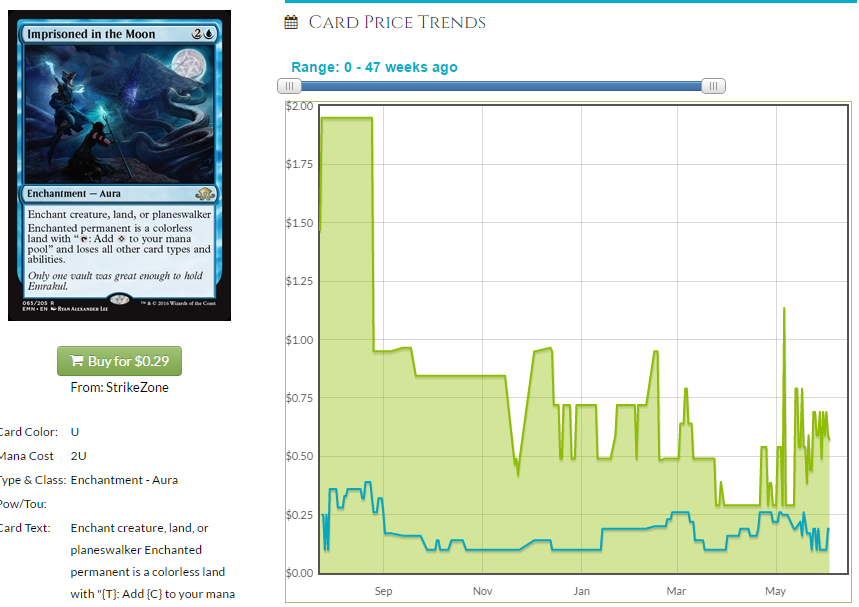 Wow, it’s under a buck. BRB, filling up a shopping cart full of these at under $1 because the ceiling for this is $10, right?

No, of course not. This card is Blue, and Blue doesn’t need to trifle with goofy-ass removal spells. Blue has Treachery and Blue has Cyclonic Rift. Green doesn’t have Cyclonic Rift, Green has Cyclone and Cyclone is never going to be Cyclonic Rift. Song of the Dryads is goofy but goofy is good enough and the next time Green gets some goofy removal, we need to give it a second thought, especially if it’s in supplemental product. Spells that do what Green does best are represented in the Top 100 but spells that do what Green does terribly are over-represented and we need to take note of that.

5. Fair Play is for Suckers

You win Magic games by getting ahead and one way to do that is cheat. If you aren’t inclined to cheat in a game of EDH because you’re likely with friends and there are likely no stakes, congratulations. You’ve hurdled the bare minimum requirements for being a non-scumbag. What do you want, a parade? If you have to cheat, cheat legally. Of the Top 100 Green cards, 15 of them deal with cheating things into play. The bigger the better, as evidenced by Genesis Wave surpassing Birthing Pod in price in the last few years. Granted one of them is banned in Modern and the other is ostensibly playable in a deck one guy played one time, and also Birthing Pod is still played more and its price is being pulled down by being a two-of in an event deck… where was I going with this? Oh, yeah, Genesis Wave is great and Genesis Hydra is also a good card. Maybe Genesis Hydra can go up longer term. Maybe we look at Lurking Predators and see how that recovers. Maybe Yisan finally starts to be worth money as a non-foil. As long as there is cheating going on, Green is about it because Green has expensive creatures and paying mana costs is for suckers.

Do we want me to do this for the rest of the colors? I feel like there is a lot to unpack and there are some valuable insights. What surprised you when you looked through and saw which cards were played more than others? Any surprises? Do you use data like this to try and predict future card prices? Let me know in the comments section. Hopefully next week we’ll have some spoilers to dissect. Until next time!