Man, #GPVegas, right? I’m on about four hours of sleep right now, and I’d imagine anyone else that attended is in the same boat. Some Invocations were spoiled. Inventions Engineered Explosives was bought out. The Modern GP had a wacky top eight. Everyone who knew what they were doing spent way too much money on food and loved it. But man this Monday sucks.

Inexplicably, there were two Hatebears decks in the top eight of Vegas. I’m not exactly clear on how that happened. Nevertheless, here we are. Hatebears has been a permanent fixture in the tier 2.5 bracket of Modern, and this weekend we saw that even mediocre decks can occasionally overperform.

There’s certainly a subset of players that enjoy this strategy, and that will continue to be true so long as you can attempt to tax and needle players out of the game. People were doing this with Maverick in Legacy six years ago, and the strategy is still around and kicking today.

Leonin Arbiter is a permanent fixture in Modern D&T, and while normally I wouldn’t be keen on cards from a semi-niche strategy like this, Arbiter has now gone quite awhile without a reprint, and I wouldn’t say Wizards is gunning to print him again. He could show up in Iconic Masters or Masters 25 of course, but it would be one of those “well I guess” reprints, rather than a “we need to put this somewhere.”

There are a few foils at $10, and putting two copies into the top of Vegas is likely to inspire more people to move into the deck, as it’s a sort of validation of the strategy’s competency and competitiveness. I’m not sure that’s true, mind you, but it will read that way to some. In any case, $10 for foil staple in a tier two-ish deck that’s now pushing seven years old isn’t a bad pickup. Sales of just a few playsets would put this firmly in the $20 range. 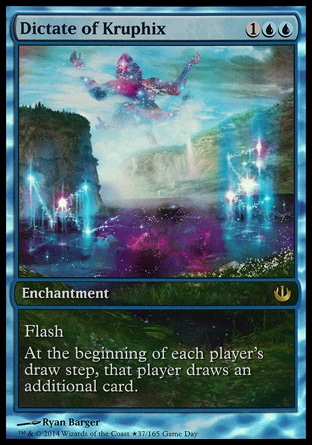 I’d say there were two exciting things to see in the Modern GP, and UB Taking Turns was one of them. It was certainly a wild list, with specific quantities that appear to be tested. Does that mean it’s actually a good deck, rather than just someone that got lucky at the wrong tables in Vegas? Maybe. The tools for some sort of turbofog list are basically all there, and it’s a strategy that has been successful in other formats multiple times. Death’s Shadow existed for years without anyone discovering it; the same could be true here.

Whenever a deck like this pops up on the radar, a small rush of players look to pick it up. Time Warp and Temporal Mastery would typically be the cards most poised to jump in price, but there’s suppressing factors. Mastery was just reprinted in MM3, and while it’s been longer for Warp, there are still four printings out there with well over 200 copies available. Part the Waterveil was just printed and has a huge stock. Exhaustion has 1,000 printings. (Although I went looking for 9th Edition foils, and I cannot find a single copy anywhere at any price.) Howling Mine is the same. I figured normal Dictates would be a good place to start, but there are 250 copies on TCG alone. Maybe eventually, but that day is not today, and it’s the type of card Wizards will reprint off-cycle.

I had forgotten there was a Game Day promo of Dictate though, and it’s sweet looking. A quick check sees just 24 vendors on TCG with copies. That’s a number I like to see. Over on EDHREC Dictate shows up in over 4,000 decks, which puts it on the list of most popular EDH cards in the last year. That’s another number I like to see.

Copies are available right around $4, and UB Taking Turns or not, that number is going to rise eventually. This Modern deck is only going to expedite that. 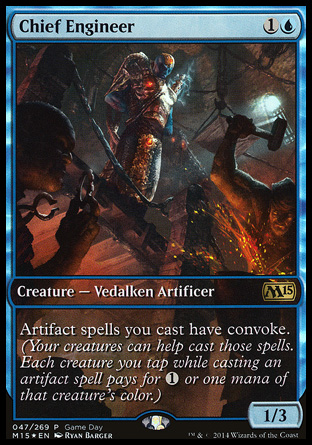 UB Taking Turns was the first interesting thing at the Modern GP; “Blue Steel” is the other one. Zac Elsik, with such credits as Lantern Control and Nourshing Shoal Goryo’s, showed up with a Grand Architect aggro deck. He did not design it, mind you — please don’t yell at me in the comments that he stole the idea — he just tweaked it, and performed reasonably well with it, with a final finish of 11-4. (With three losses to Eldrazi Tron, apparently.)

Grand Architect is certainly where you may want to look first, but the time for that was a few weeks (or years) ago. At this point, that ship has sailed. Lodestone Golem has too many printings and too little demand. Master of Etherium is already pricey. Smuggler’s Copter is too new. Chief Engineer was printed in Commander 2016. But — just like Dictate of Kruphix — I forgot there was a game day promo of this guy.

With over 2,000 EDH decks running Chief Engineer, there’s clearly demand. For reference, there are 2,200 Breya decks in the REC file. He should also be an auto-include in just about any deck with an artifact theme. And, again, cool looking Game Day promo that’s never showing up again.

You can snag these for around $2 right now, less if you get lucky. There aren’t too many out there though. Most major vendors are out of stock or low supply, and TCG is down to 50 sellers. That’s not miniscule, but it’s not a large reserve either. I’m not expecting a sudden buyout on this unless the deck top eights another SCG Open or Grand Prix in the near future, but pressure on supply will definitely be constant, and there’s no more copies coming.