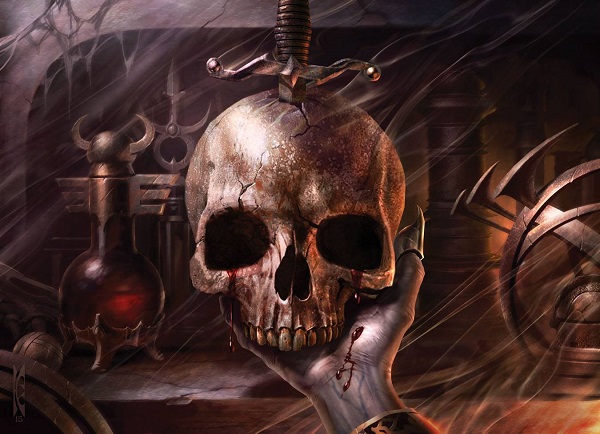 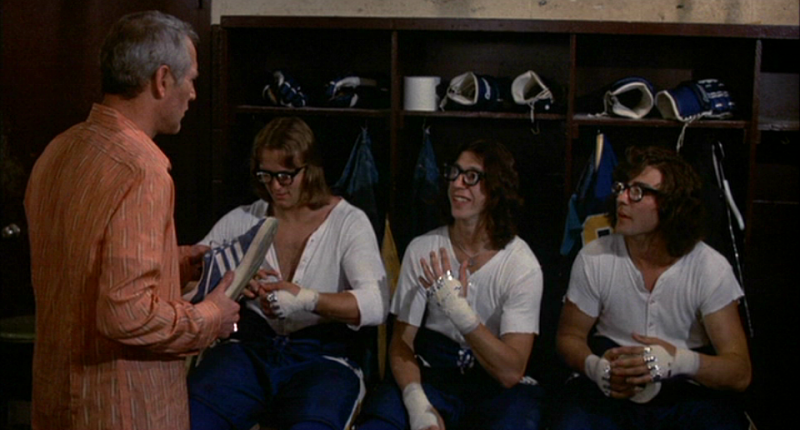 Let me just say that if you haven’t seen Slapshot, stop being terrible at life and correct that. If you have to stop this article right now and go watch it because otherwise you’ll forget, I’ll wait. I may or may not reference the movie a lot in this article so if you’ve seen it, prepare to catch a bunch of references. You know, unless I don’t do it.

I wanted to talk more about foil copies of the Top 100 EDH cards today because I think there is some still some value to be gleaned here so let’s take a look. The link is here. Also, I was missing a card and had to figure out what it was. I always do this, I miss some mundane detail! Wait, that’s Office Space, not Slapshot. What are the good Slapshot quotes? I don’t know, something about the team moving to Florida. Wait, I got a reference for this. “I ask him who own da mistake and leave card off of list.” “And what did he say?” “Ownsuh, OWNSUH!” I’m a guy who ownsuh his mistakes so let’s figure out what I forgot.

But not for me. I made a mistake and left a card off the list (A reader found it – nice save). I have been doing EDH decklists for so long, I probably saw the list was at 99 and said “Plus the commander makes 100) and called it a day. The card I left off the list? 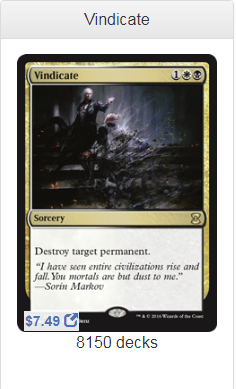 Vindicate isn’t quite the monster it used to be. Eternal Masters was designed to curtail the prices of certain cards that seemed overly expensive just due to scarcity and a few attempts at things like judge foils didn’t really curtail the price as much as they’d hoped. Eternal Masters seemed to knock it down a peg or two, making the cheapest non-foil available around $7.50. Here’s the really curious thing.

When a set is brand new, I go to the LGS for the prerelease. I don’t go to as many events as I used to – when Return to Ravnica was released, Bushard and I went to 6 prerelease events in a single weekend, which was an angry gauntlet by the end because after building that many sealed pools, you start to always make the finals and have to play the whole thing. Very little sleep, bad food, Magic all day and night – I couldn’t do it at my current age. I’d die. Now I go to one or two, which is too bad because trading at prereleases is the best. People look up prices but those prices are all about to change so if you’re getting out of stuff that’s going to plummet at peak supply and get into stable stuff like EDH staples, you’re going to get maximum trade value. Your trade partner is happy because they shipped old cards they don’t care about for new, shiny stuff and everyone wins for once. The best part about foils at these events is the foil prices are basically not known so everyone has to guess. What does everyone guess? “Uhhh, I don’t know… double?” Double seems about right. Most foils are twice the price of the non-foil at first so if you can grab foil EDH cards for a mere 2x at the prerelease, you do it.

Double isn’t always correct, but for EDH cards that get a lot of play, a multiplier below 2x is suspicious. Is it always going to be at least 2x if nothing is wrong? Not necessarily, but just flagging the cards that are below 2x (but above 1x which I already flagged because those are already worth having a separate conversation about which we did have) means we take a look at them and see why they are the price they are. Maybe they’re due for some divergent or even convergent growth.

Having flagged the cards between 1.0 and 2.0, I have 14 cards to examine and see if there is an explanation for the price or whether I think there is room for growth (divergent or convergent) and therefore a correction is imminent meaning there is financial opportunity. The first one I’ll look at accidentally inspired this article. Like, I had no idea I was going to write about cards between 1 and 2x until I made that joke about finding the 100th card on the spreadsheet. With this spreadsheet, I just writing and the article develops around my findings. I know you don’t need to know about my process, but that’s got to be worth noting, right? 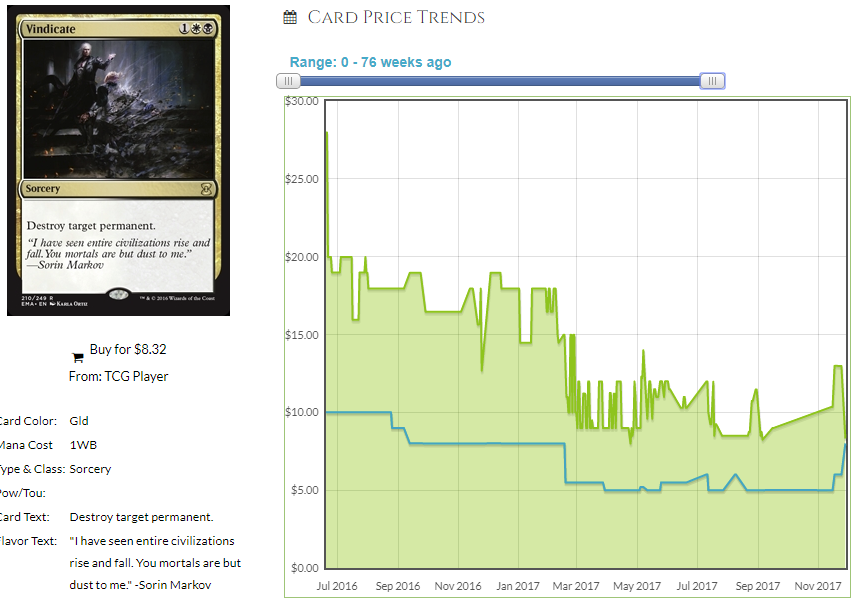 We caught this basically at a little above its floor. It looks like the reason there is a small multiplier is that the foil is about to grow in price. 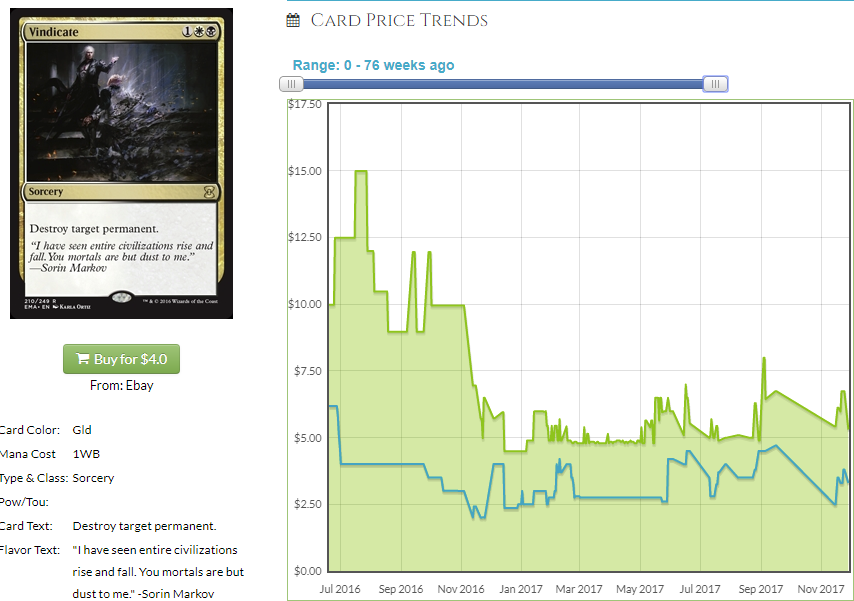 The graph of the non-foil is showing similar signs of life. It could be that the growth about to begin will be convergent. However, with a 1.3 multiplier, the foil is probably a better investment given how close they are in price. If the multiplier holds, you’ll make more money. It won’t go any lower than 1.3x in my view since its growth will be predicated on it being an all-star in EDH and getting a modicum of play in Legacy. I think these cards like grow divergently due to the increased scarcity of the EMA foils (the cheapest foils – there are judge foils out there, but, still, this is a chance to get a $10 foil). $10 for a foil Vindicate seems reasonable and since the price difference is negligible and both prices look poised to increase, I think there is a play to be made here.

It’s possible that later in the article we’ll figure out that a 1.3 multiplier on a card that already has judge foil printings and got reprinted in EMA is a big red flag. That does describe a lot of the 14 cards we flagged, now that I think about it. What else was in EMA that may or may not have had a judge foil printing?

Wrath of God, Mystical Tutor, Sylvan Library and Vampiric Tutor are all EMA cards, all had foil printings (but only Wrath of God had foils in a real set before EMA) and all have a foil multiplier below 2.0.  I think this says less about some “curse” the cards have if they’re in this category and more about the relative undesirability of the EMA foils for people inclined to play foil copies of the card. EDH players want the cheapest copy, usually and Legacy players want the sexiest. As EMA copies dry up, the cheapest Vindicate is starting to approach the cheapest foil, which should move the price of the foils just on principle. The smaller the multiplier, the more attractive the foils are as they become a “why not pay $1 more” thing rather than a luxury thing. Legacy players don’t want the cheapest foil available – at least not yet. I think all of these cards – Vindicate, Mystical Tutor, Vampiric Tutor, Sylvan Library and Wrath of God all could have similar upside to Vindicate and we should look at their graphs. 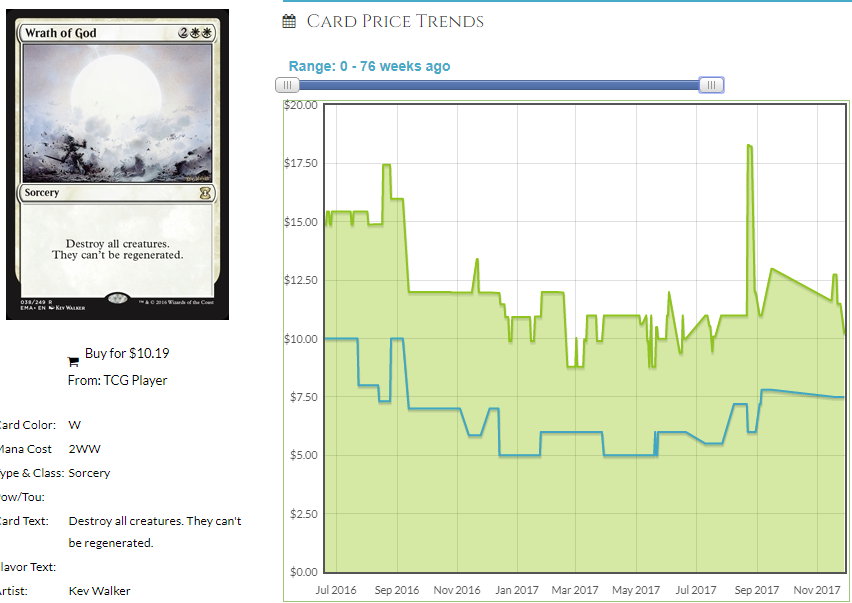 We started here because I expected this to be the outlier. It has so many foil printings and with better art. There’s no reason to play this card when the player rewards foil is like $16. This could go up but I don’t want it at $10. 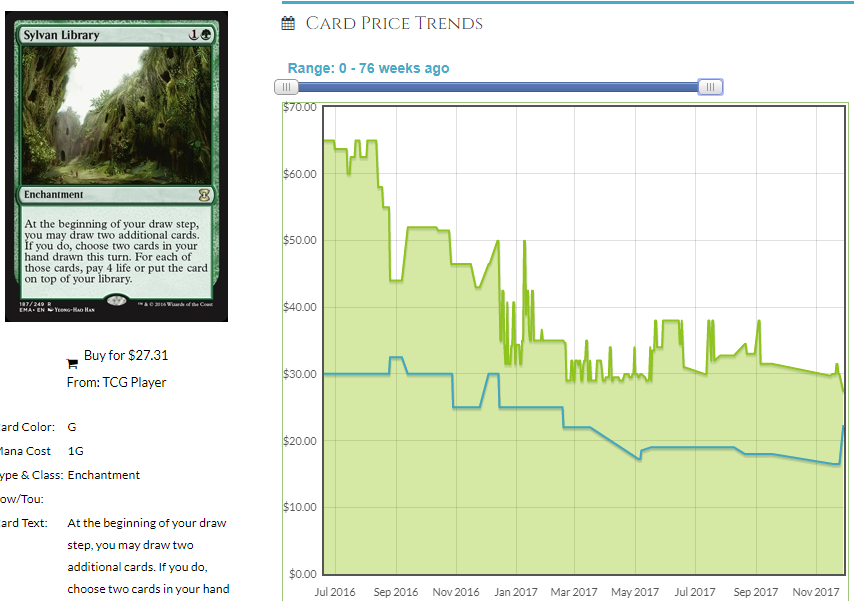 Dealers are starting to notice this card. The buy price is beginning to converge with the retail price. I think this card is a buy. The only other foil is the same art from Commander’s Arsenal and Sylvan has some cross-format applicability that should swipe some of the foil copies EDH players wanted for themselves. This is plateauing on top of the buy price beginning to recover – I don’t think it gets much more healthy-looking than this. I am REALLY glad I decided to flag these cards and take a look at them individually, wow. 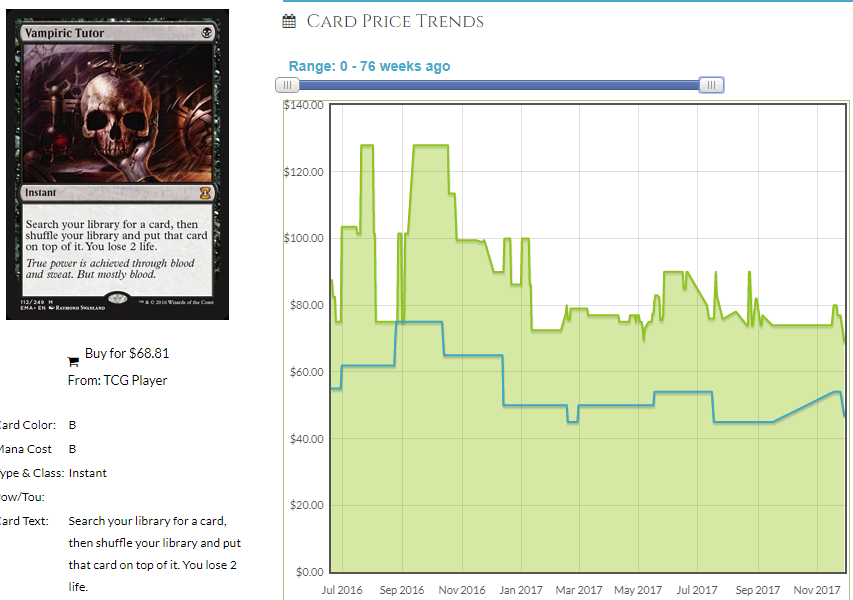 This is a little different. When you’re talking about a $45 card, that 1.y multiplier starts to look a little different. This is almost a $90 card most places. I think if you’re going to shell out $90 for a foil, you shell out for the Judge foil. Also, I just realized the Judge foil is cheaper than the EMA foil (did NOT see that coming) and that was the one I used for the calculation. I don’t know why the EMA foil is $90 and the judge foil with the better art is cheaper, but that’s how it is. Let’s look at the judge foil to see how that looks. 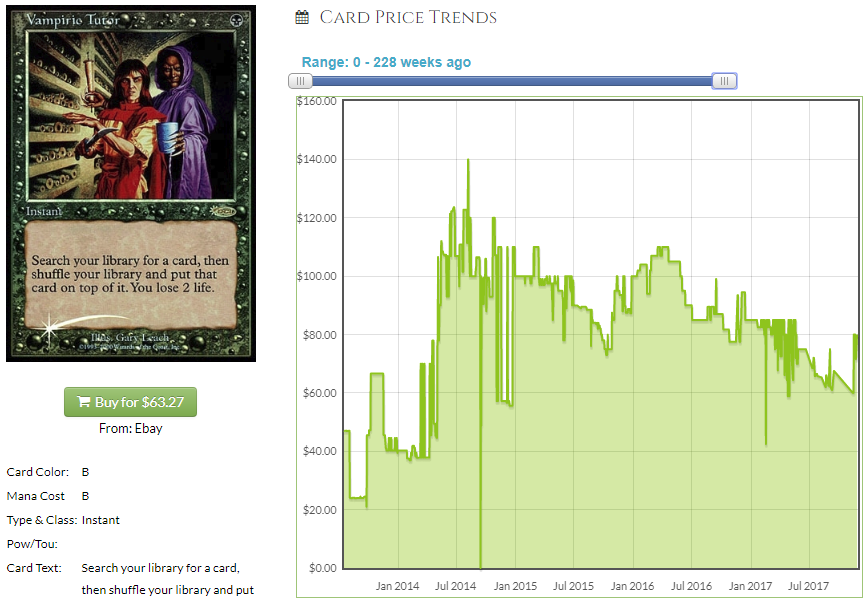 It took a bit of a tumble. Apparently people prefer the EMA printing, which looks like garbage to me, but I’m one vote. So far we aren’t learning much categorically about these cards other than that we need to look at their graphs, but when we do, we usually see what’s what. I think the future of the judge foil is imperiled and with the future of the EMA foil being so bright the card has to wear shades, maybe this card was mis-flagged. While the ratio of EMA to Judge foil is 1.7:1 the ratio of EMA to EMA foil is 2:1. Still not great but it wasn’t what we were hoping to find. 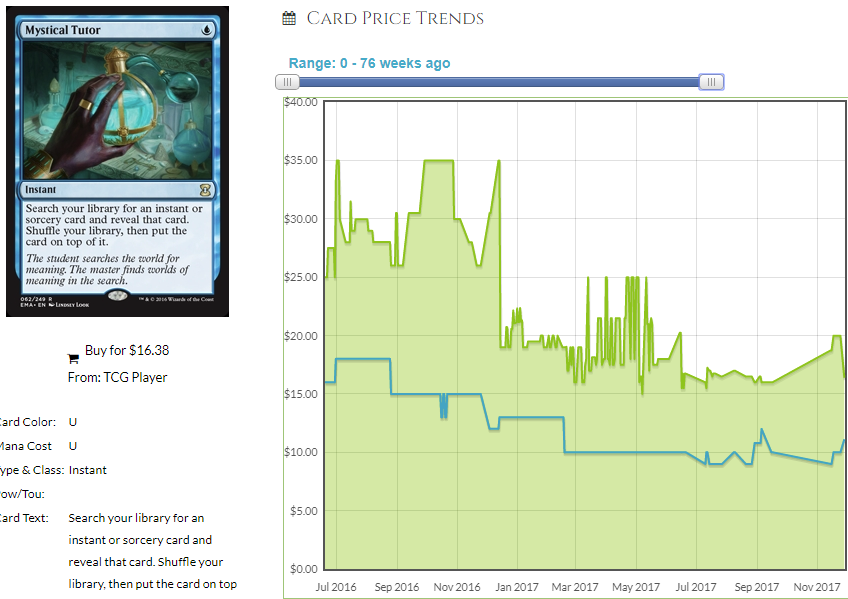 This is about what I expected. Since the other foil is a garbage, curly FTV foil, the EMA foil is going to be more attractive. It’s the opposite of what I expected with Vampiric but it’s the same result. I like the future of the EMA foil, personally. There isn’t a ton more to say about it other than that I think the graph shape looks pretty healthy and this card is headed for some growth. 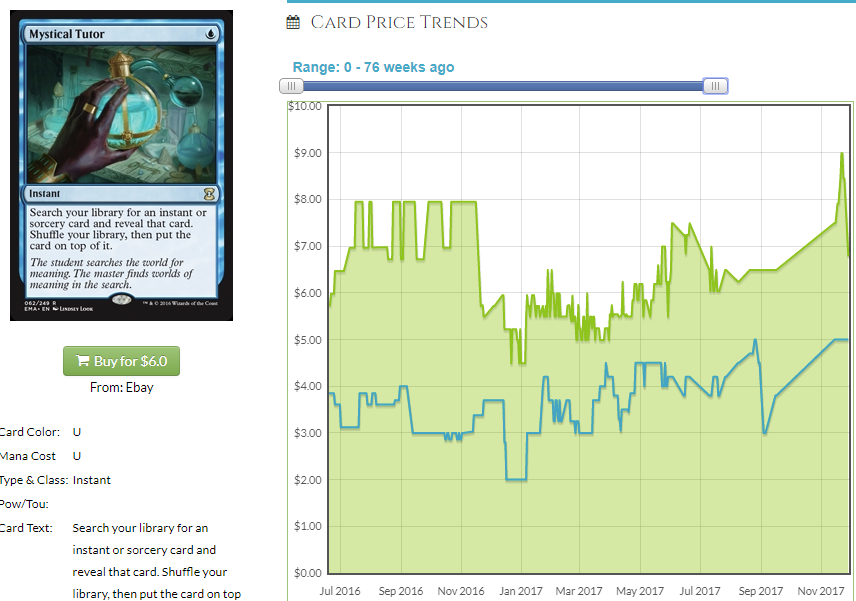 In fact, it seems like the foil is actually lagging a bit behind the non-foil. It’s what we expected – Mystical Tutor is banned in Legacy and that means that it’s likely that EDH demand is driving prices which means the cheapest copy (non-foil) will move first and if the multiplier holds, there is more growth potential in the foil. But this card has grown so much, it’s no longer even the cheapest non-foil. 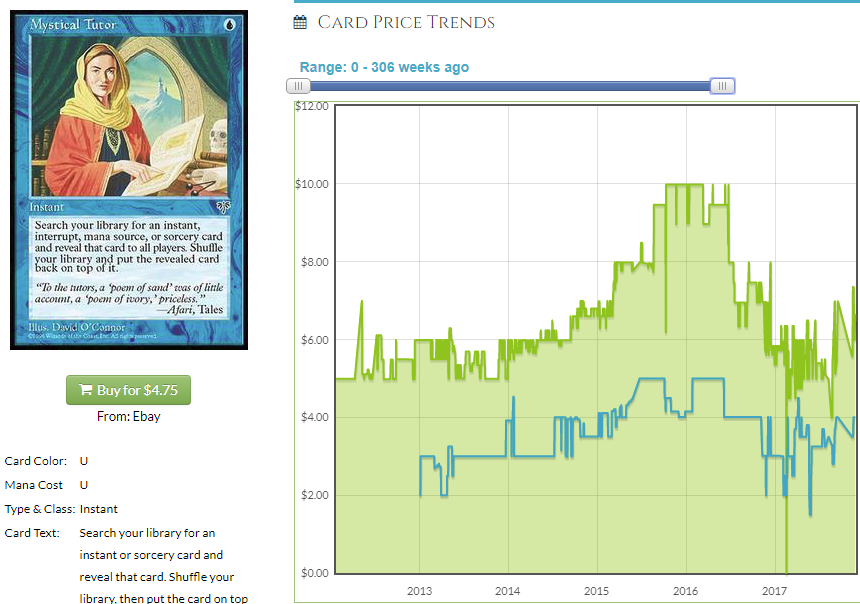 As expected, the Mirage version took a bit of a tumble when the reprinting happened and is only now beginning to recover. Some people like the art with the Holy Hand Grenade of Antioch on it so that could explain the precipitous growth there. I think all Mystical Tutors have upside – they’re basically all a buy for me, even the white-bordered one. 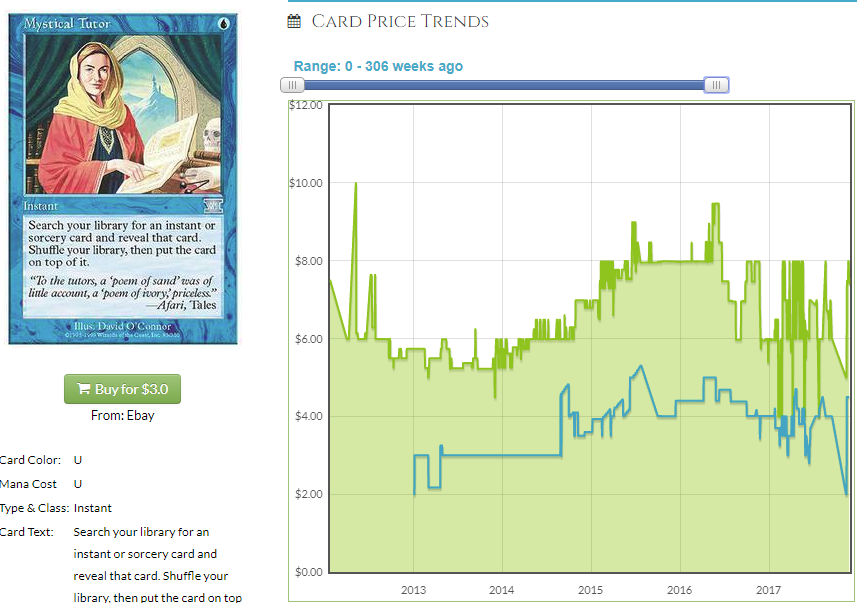 I think this could recover as well. It’s the overall cheapest copy which means EDH players who just want the cheapest one irrespective of art or border or shininess will target this one. I think it has upside. 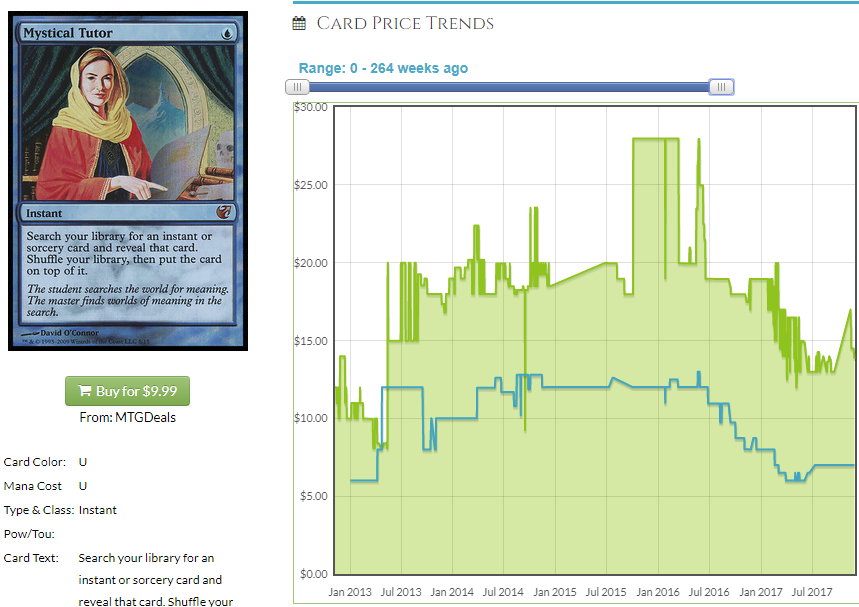 Even the FTV foil is starting to show signs of life. It took the same tumble as the others at the EMA printing but if you want a foil of the art with the tutor on it and not the purple alien hand holding a Baldur’s Gate mana potion, this is your best bet. I hate EMA foiling but with the price graphs all showing signs of imminent recovery, you basically can’t go wrong.

I expected to get deeper into the list but we had a lot to talk about today. I like when I start digging in as I write and find so much I have to postpone the rest of the article for a second part. That’s fine – next week we’ll be back to discuss the 9 other cards I flagged in light blue on the spreadsheet. Check it out and see if you find anything with those cards – I suspect you will find some similarities between some of the cards. Until next week!