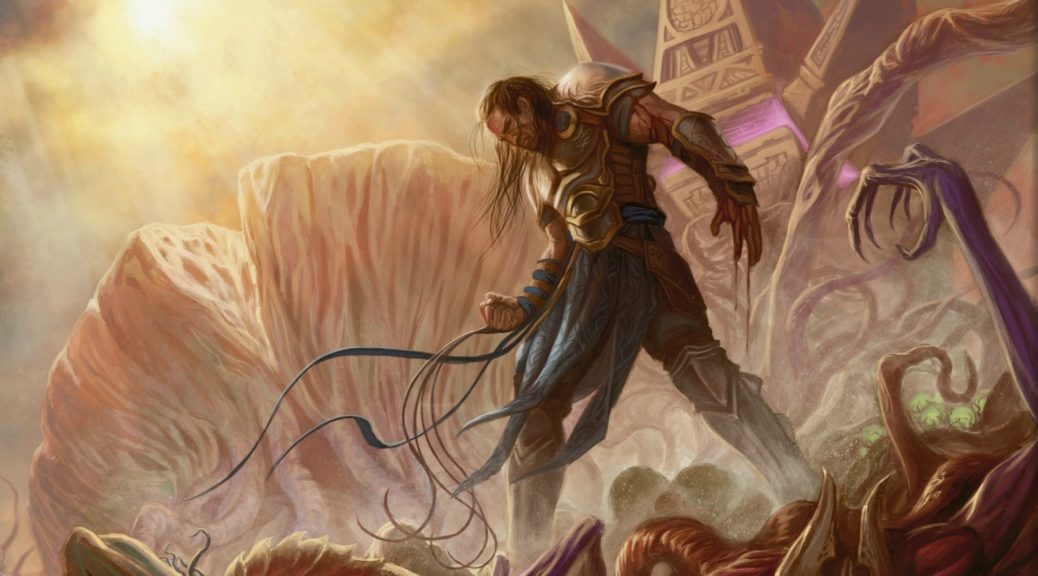 Last week I decided to delve a bit into what I thought was going to get reprinted in Masters 25 or at least felt risky to me. Some stuff feels sort of difficult to reprint and other stuff feels like it needs it.

I am holding like 100 Master of the Pearl Trident because I was busy thinking about other things when the duel deck was announced. I didn’t think they’d print anything I wanted to pick up so I figured the duel deck wasn’t really relevant and they never print cards as expensive as Goblin Guide so I didn’t give it much thought. But even though I was safe on getting wrecked for $15 a copy on Goblin Guide (That Masters printing worked wonders) I didn’t think about getting wrecked for like $4.50 a copy on Master. I was still cooking that spec and I ate it. Now, those copies are all gravy since I sold enough to break even and then enough to get that break even amount again, but still it would have been nice to get $8 a copy someday or at least get out for buylist before the buylist tanked. Even buylisting would have felt bad because that’s a panic move and people only panic because they weren’t thinking ahead, so let’s think ahead and not eat it again.

I think we can all agree that if you have Rishadan Port, dump them now. Once Port is confirmed not in Masters 25 (should that happen) the price will go up a lot so be ready for that, but I don’t like the idea of holding them right now at all.

We looked at a few cards last week that seemed like reasonable cards to dump because they were likely to be in at mythic rarity. There will likely be 15 mythics and 53 non-mythic rares so there is quite a bit of guessing to do but I think it’s worth doing this work so we don’t caught with our pants down.

I was going to do this by like, color or something but I think it’s better to just list some cards I think could use a reprint and have a decent shot at being in Masters 25.

I am going to have to make some assumptions just to give myself some space to work with but I am at least going to tell you my thought process. I really hope we can engage in the comments section of this one if you think I made some unfair assumptions.

Let’s look at some more cards I think you should get out of.

I made an assumption last week and that is that this is a good place to reprint Rishadan Port. I think that’s a good assumption to make, personally. I also think that Port is very unlikely to end up reprinted at non-Mythic rare. That means Port is mythic which means that there will probably be 2 mythics of each color and a 3rd cycle of mythics spread between land, gold and artifacts. That’s quite an assumption but it’s based in logic. They try to keep the color balance… err, balanced because this set it meant to be drafted and also, why would you not?

In Iconic Masters, there were 3 mythics per color for a total of 5. In Modern Masters 2017, there were 2 mythics per color, plus Cavern of Souls, plus 3 good gold mythics and one bad one. Port would handcuff them to doing this split. I think we can reasonably try and guess what the other mythics outside of the colors could be. I’ll tell you the 4 cards I think will be in the cycle with Port. 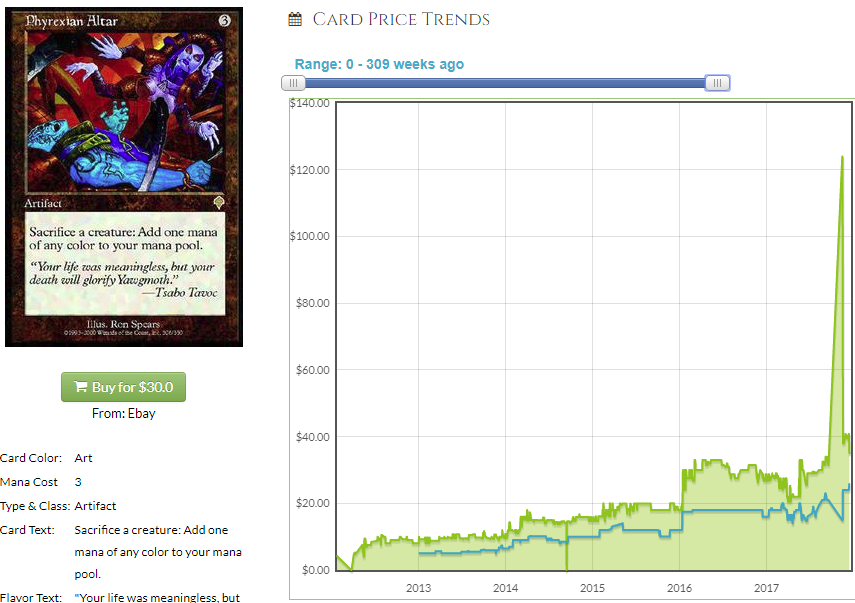 I know I have been banging this drum for a long time, saying it basically demanded a reprint in a Commander set when it was $18 but this is the last really good shot at reprinting this. Phyrexian Altar seems a little underwhelming in Limited, and people will likely bristle at getting a “junk” mythic like they do with Channel (which ends up being very good in Iconic Masters Limited, but it’s a bit of a booby prize given its current price). If there is a small amount of support across the colors, though, this can fit into most builds. Tokens, graveyard stuff, threaten effects – this does it all. Masters 25 seems like a bit of an awkward place to jam this, but where if not here? If Altar isn’t in Masters 25, even at its current ridiculous price, this might be a card we get into just because it’s probably safe for a while, though its growth potential may be limited due to it being out of a lot of players’ budgets at this point. I could see this in M25 and I’m starting to sweat the more it goes up and calls attention to itself.

Last week we said we could see some sort of Sliver card, Legion or Hivelord, in one of the spots. I think that’s possible but I won’t count it as one of my 4 picks for today.

This at non-mythic rare would be pretty disastrous for the price and a printing at mythic might feel bad to people. We need cards close to Port in value and while it’s possible a bunch of the cards in colors will hold up a lot of value, this could tank in the short term. This is about to be eclipsed in price by Chromatic Lantern again so it’s possible the FTV printing capped the growth potential but I still think this is a good inclusion in the set. If this is in at non-Mythic, get every single copy you  can get your hands on since this should recover given its relative ubiquity in EDH and the fact that it has “lotus” in its name. 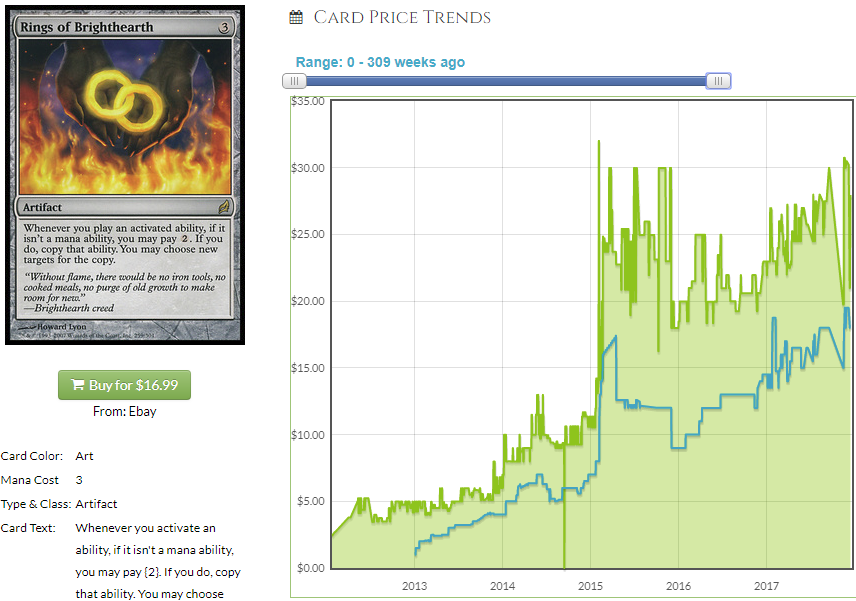 Like a lot of the cards on this list, it will take some finagling to make this worth it in Limited, which is the drawback of looking at EDH cards. However, once I started delving into Legacy and Modern, most of those cards were in Modern or Iconic Masters or they’re expensive because they’re on the Reserved List. They’re running out of new stuff that needs a reprint which forces us to look in the $30 range. The set is liable to have a Mana Drain or Aether Vial-esque card or 4 and it’s also liable to have a lot of Bonfire of the Damned-priced cards. Bonfire was like $10 when it was announced in Modern Masters 2017 at mythic, so it’s reasonable that some of our mythics are “only” $20 or $30. Rings is out of control and while it’s awkward to just jam it in a Limited set without giving it a ton of enablers, it’s also awkward to put a $30 card in a $39 Commander deck. Where else can this get a reprint? 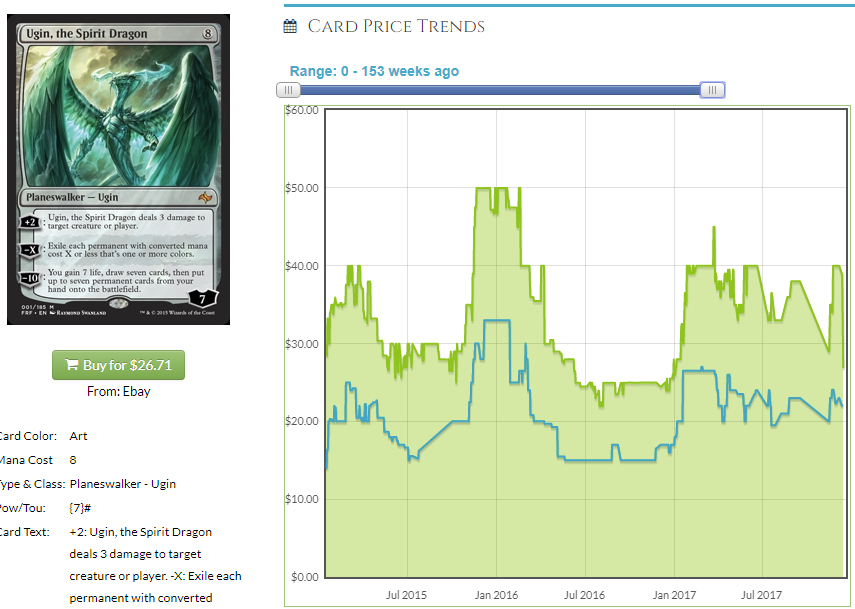 Karn has gotten the reprint treatment, but Ugin, despite holding pretty steady, stuck out to me as a card they might want to try and use to sell packs. If Masters 25 doesn’t have any Mana Drain equivalents, a pile of cards around $30 each at Mythic seems fine. That sells $10 boosters that also have a foil in them and the set is liable to have some really spicy cards at non-mythic rare. Ugin seems like as good a candidate as anything else and Planeswalkers got some extra relevance in EDH recently which only makes their stock go up. Could we see Sisay get another reprint (She was in an FTV, remember? It’s OK if you don’t – it was sort of terrible).

I didn’t really find any good candidates in the Land slot except for maybe one, which I’ll talk about then I have one more point to make before we wrap up. 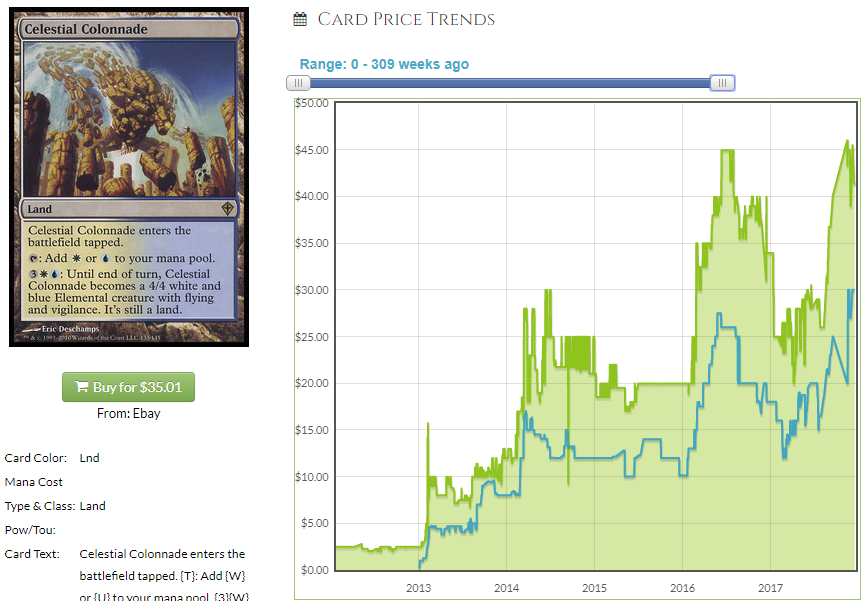 This is tricky to reprint. In order to justify reprinting Horizon Canopy, the only card from that stupid cycle anyone even wanted, they reprinted the whole cycle. Do we jam a $40 Colonnade in at non-Mythic and get handcuffed to reprinting Stirring Wildwood a 40th time making it cost as much as a bulk common? Do we just do 5 lands from no cycle, some of which may tap for mana of two different colors and one of which taps for colorless? I think if we get this, we get the whole cycle which might be OK. That is, the cycle of 5. The cycle of 10 would ruin the EV of the entire set – I’m not trying to pay $10 for a booster and open a Wandering Fumarole.

Colonnade is a card that needs a reprinting but might not get it in Masters 25 based on the rules of Masters sets I’m extrapolating from what they have done in the past. We could see a “cycle” of lands that tap for allied colors, though – some sort of land that turns on Kird Ape rather than Raging Ravine, for example which does something that helps us build the set for Limited but doesn’t fill out a “true” cycle.

Speaking of cycles, the last card I want to mention as a candidate for Masters 25 would necessitate a cycle most likely. 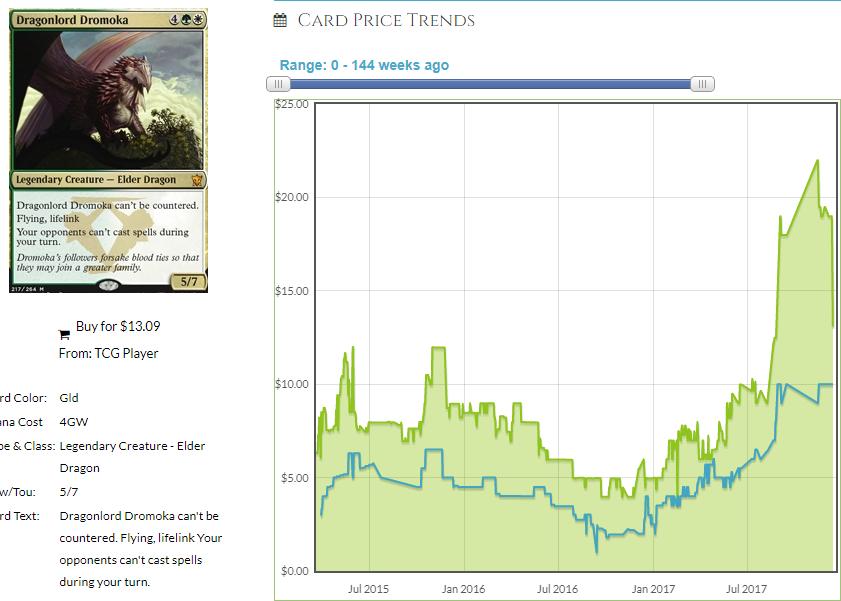 Is it too soon to give this cycle a reprint? It could be, but it might not necessarily be. Two-color combinations are tricky in a Masters set since it all but compels them to have 10 different cards to fill out every combination, taking huge chunks out of your design space. One card isn’t a big deal (like Colonnade) but it is when it requires 5, sometimes 10 spots to be designated to fill out the rest of the cycle to keep the colors balanced.

Before you head to the comments to say “They won’t print this many EDH cards” I would like you to take a look at the top 50 cards in Legacy and Modern and tell me what you think needs a reprinting. There are a lot of random stupid cards like Drop of Honey that randomly go through the roof but without the ability to reprint cards on the Reserved List (I don’t care if you don’t like the Reserved List, save it) they are stuck targeting cards in the more recent years. We’ll continue to see cards like Academy Rector pop and not have any remedy from Masters sets. What they can control, however, they should. Cards like Staff of Domination, Gauntlet of Power and Coalition Relic probably cost more than they need to.

Anyway, that’s it for me this week. Take to the comments and tell me why I’m wrong about the cards I think could be in Masters 25 and if you have suggestions for cards for me to analyze, let me know. We’ll try and get the 10 colored mythics next week if we don’t have anything spicy from Rivals to talk about. Until next time!