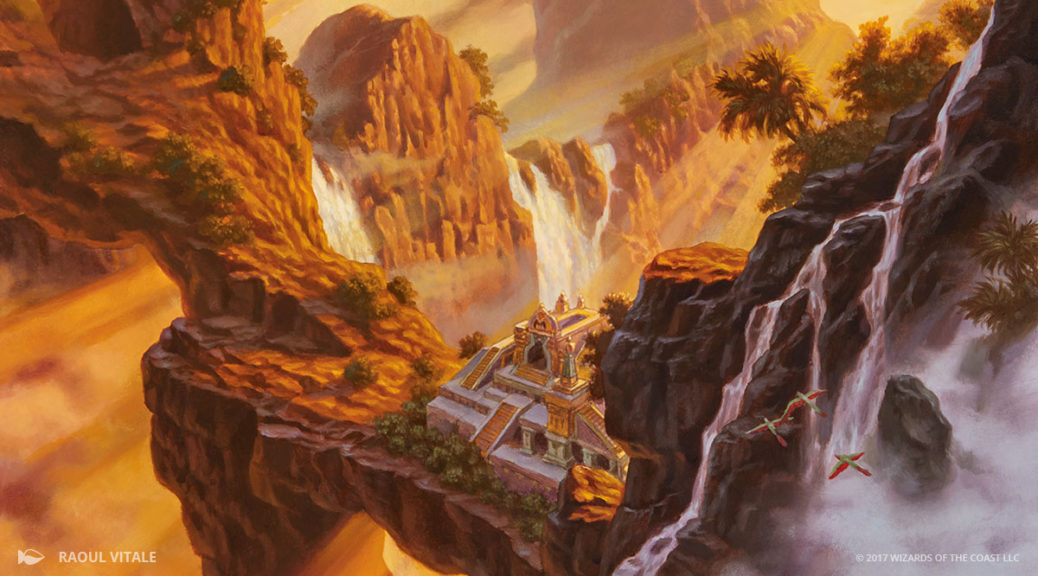 This week I thought I would take a look at basically the only Legendary in the set I think will spawn a good deck. I could be proven wrong and the great thing about being proven wrong is that the process of proving me wrong generates a ton of data and I can use that data to predict what will go up in value and thus be right and you’ll forget all about what I said today. Are you going to be upset I said I didn’t think Azor mattered this week if in three weeks I come back and say “Everyone is building Azor, get these cards that I never could have predicted three weeks ago but which are obvious now based on EDHREC inclusion data – you have 4-6 weeks to get these cards”? Nah, you’ll thank me for the tip. So for now, my tip is “I think only Kumena and one other Legendary creature matter” and I think we’ll talk about it.

The Card That Matters 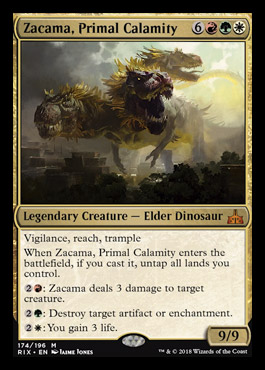 This is a dinocerberus and it was designed by an 11-year-old boy who was brought to Wizards of the Coast on “Take your kid to work day” and given printer paper and crayons. It has reach because of course it does, but no one is ever going to remember it has reach which will lead to game states where your opponent swings at you with a flier forgetting Zacama has reach and you’ll fail to blow him out because you forgot it has reach, also. Then you’ll combo off and win the game because apparently it’s cool to print Great Whale if it’s also got more abilities than Obelisk of Alara but can’t be paired with Deadeye Navigator. This dino is going to be a great combo enabler but no one really seems to have figured out how based on what I am seeing online. I think people will play this as a combo deck eventually, or at least a deck that takes advantage of his ability to untap all of your lands. I think there are cards that go up based on this assumption.

The Other Cards That Matter Because That One Matters 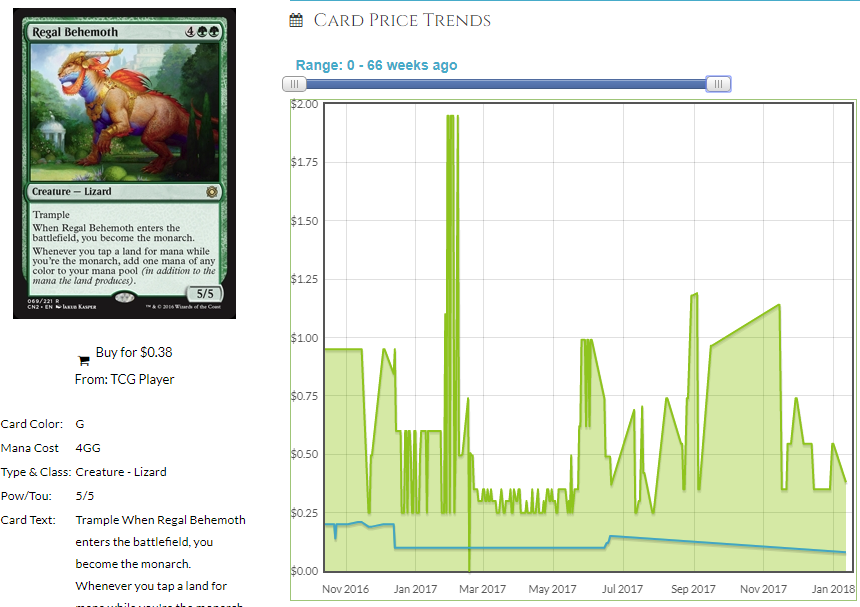 Someday someone can explain to me how a Zendikar Resurgent that’s also a Phyrexian Arena can decline in price as we move farther away from its printing in a set no one bought. This card is EDH gold and I’ve been all over it since it was spoiled and I just keep buying more and more copies. I don’t understand what’s taking so long. 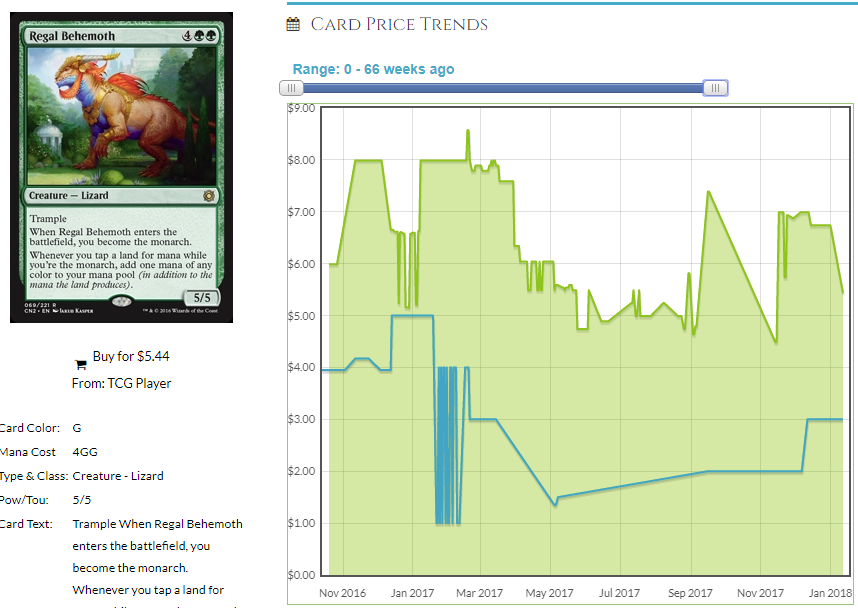 That said, the $5 foil with low supply looks primed to do some thangs. So why this card and why now if it didn’t get there before? What changed?

I think this is Regal’s time to shine. Supply is low, especially on foils and people are realizing that this card is nutty in EDH, finally. Its new classification as a dinosaur and perfect pairing with the deck people will be building most or second most for at least the next three months make this perfectly poised for precipitous price proliferation. Put that in your pipe and puff it, putzes. 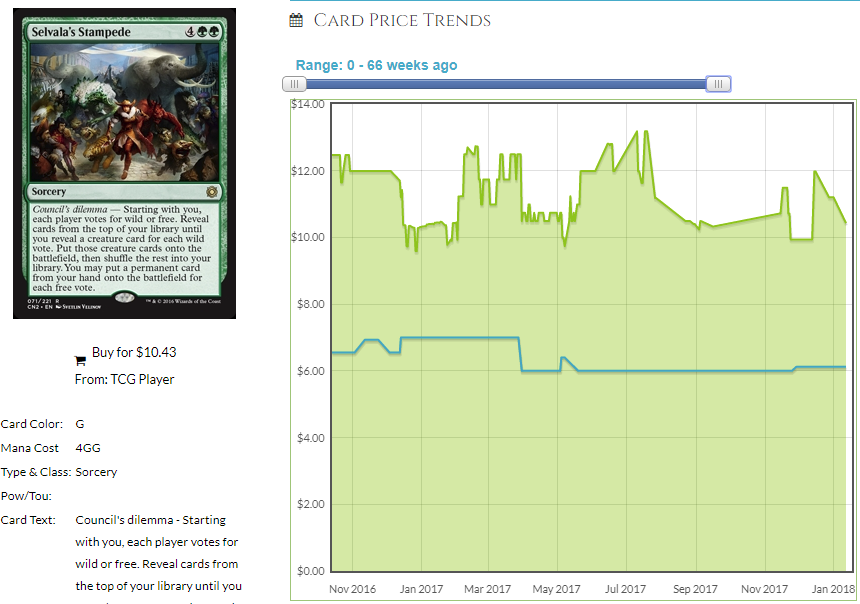 We’re probably at peak printing (I can’t even stop at this point) for Conspiracy so if you think Behemoth has a shot, check out the price graph for Selvala’s Stampede. Shown above is the foil which is hovering around $11. This is a $2 card with a sometimes $12 foil so it’s clear EDH is aware of the card. How long for the multiplier to widen and the non-foil copies to finally begin disappearing? I don’t know, but what I do know is that I think this card isn’t all that reprintable and if you can pick these up in trade and sit on them, you’ll be happy someday, This is non-mythic or it would have pulled an Expropriate by now. 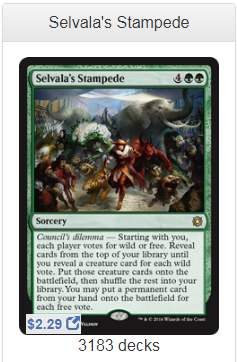 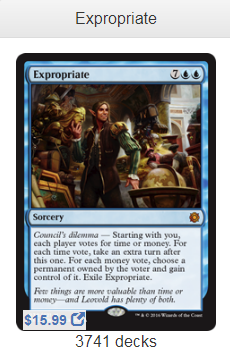 Their play profiles are on par and the price disparity is predicated on popularity rather than population. Neither is quite a staple but I think Stampede will, ironically, sneak up on people and go up in price when no one is watching. It’s ironic because the card depicts a stampede, which is very conspicuous. You get it? Ahhhh you get it. 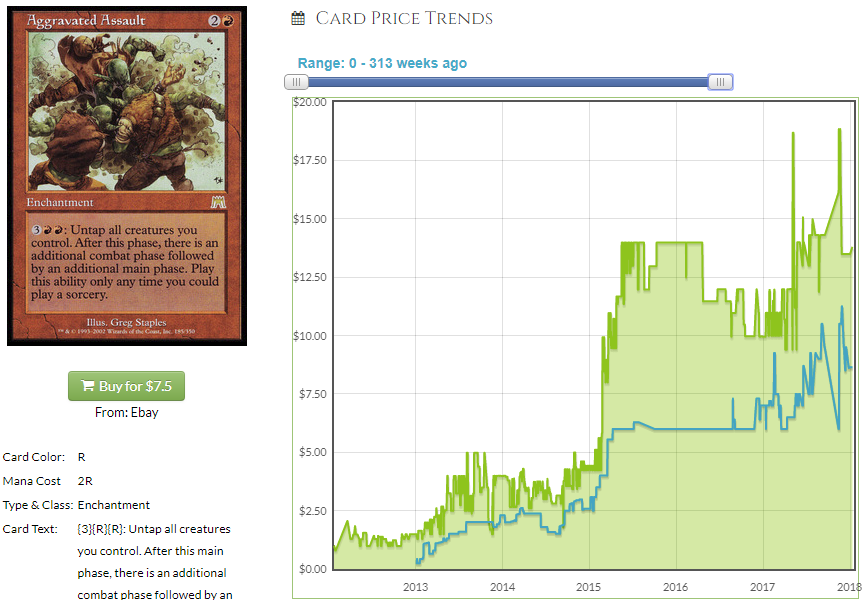 Don’t let the price graph fool you – copies of this are gettable under $5 due to the reprinting in the Explorers of Ixalan game.  That set is chock full of value and once retail outlets start fire-selling copies of a game no one wants at $70, you can get decent value with Time Warp alone fetching $10 and people being interested in buying just the game pieces on eBay so they can use their own decks. Assault is a card that is the de facto Relentless Assault effect because it’s permanent, meaning it combos with cards like Nature’s Will, Bear Umbra, Sword of Feast and Famine and a commander that untaps all of your lands. This goes up from the $4ish it is right now for sure, I just don’t know how much or how long it will take. I do know that they found another way to reprint EDH cards that were very expensive like Time Warp and Shared Animosity. Good for them. 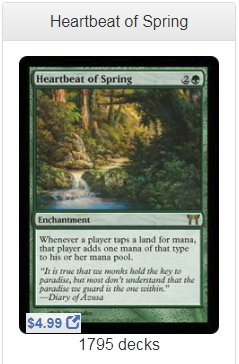 Modern could randomly remember this card and spike this to like $20 so I don’t hate having some copies of this socked away. Zacama is pretty efficient with one mana doubling effect and while Mana Flare was printed a million times, Heartbeat was in a bad set no one liked and if this spikes again, it’s a second spike that will be less mitigated by loose copies materializing. I don’t really like any mana doublers besides this and Behemoth, although there’s one more worth looking at. 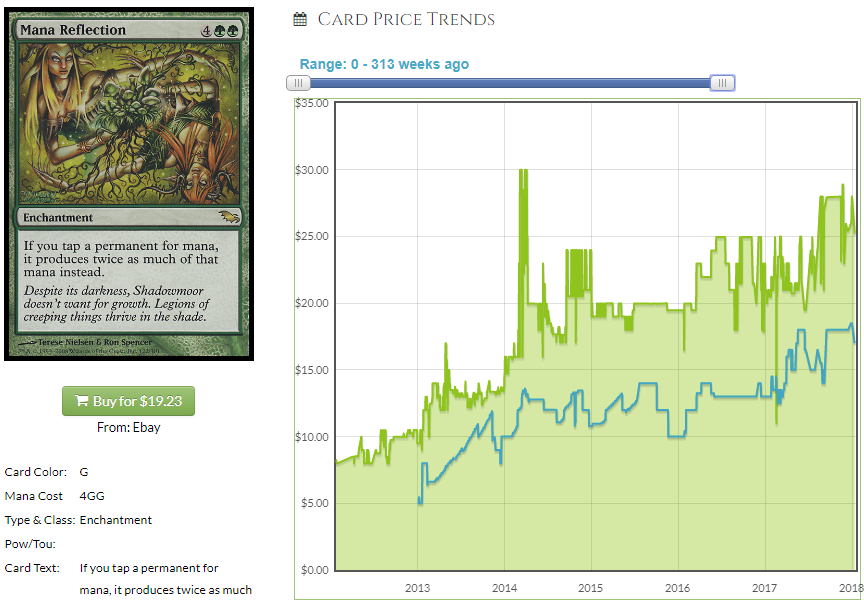 How and where and how again do they reprint this at this point? This is really tricky and it’s outside the Commander set reprint window, I think. They could jam this in a deck and it would make it like $12 in the short term but I think it would make whichever deck it was in nutty unless they had a $25 card in every deck. 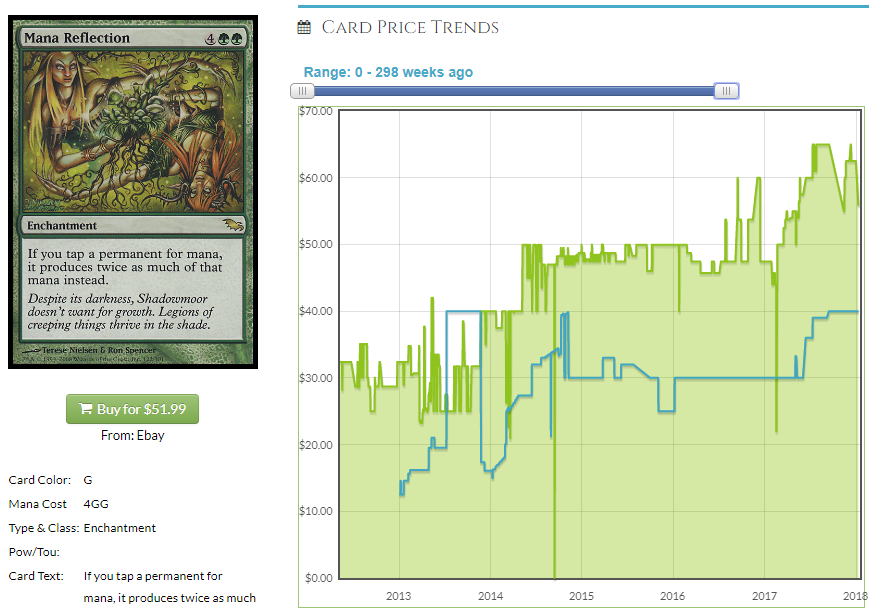 The foil is only twice the non-foil which means there is room to grow but it mostly means people can’t justify a durdle deck card like this at $55 which I get. I think the multiplier is shrinking a bit which could mean a correction is inbound, but I am not sure what the impetus for it would be. If the multiplier is a mere 2x for a card in 6,336 EDHREC decks, that means people aren’t too keen on spending the $55 and demand hasn’t gotten there. Supply could be quietly drying up, though, so keep an eye on this. Even if the non-foil is reprinted, a foil at a mere 2x the non-foil price is pretty inviting. I am not super keen to invest here, but I bet a bunch of people who never used this card before take a second look given how good it is in Zacama decks.

I think Zacama will play a lot of other cards that are expensive and won’t really budge like Sword of Feast and Famine, Greater Good, Exploration and Worldly Tutor. Check out the page for the deck to see what people are playing and how they build moving forward and don’t forget to use the filters to sort by different types of builds or by price to see what non-poors are willing to pay for and click on a few decklists up top to see exactly how it’s being built. Sure, it’s only nerds who post their decklists online, but nerds buy cards for retail so maybe we need to know what they’re up to.

That does it for me this week. I might delve into another dino deck next week or look at the block as a whole. Whatever I decide, I’ll get you the finance tips you pay for and some you don’t. Until next time!