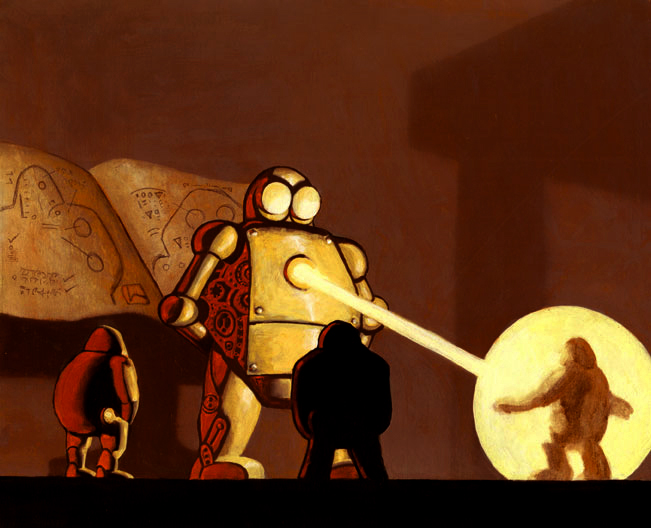 I think it can be pretty tough to predict which cards are going to go up on merit. I’ve shifted my articles to being about that solely for the past few years and it’s gone pretty well for me. I have had to work hard to get good at this but I feel like it was worth it. The problem is, my focus is on sustainability and that’s not really doing me any favors. I’ve discussed in the past how it’s intellectually lazy to target foils of cards that could get reprinted in future Commander products because you want to save yourself the extra mental steps of analyzing reprint risk. I’ve talked about how it’s lazy to target Reserved List cards for the same reason. That said, I found a pretty juicy target this week and if I’m going to be lazy and write about a Reserved List card, I might as well write about any Reserved List card I think is a good target. I’ll get it out of my system in one article.

You know what the Reserved List is. Everyone does. That said, I’ve found the more loud and vocal someone is in opposition to the Reserved List, the less they actually know in general, but I am done arguing about it. Buncha Sea Lions on Twitter anyhow. The only thing you really need to know is that there are some cards that are never, ever getting reprinted and that’s never going to change. It’s not. Don’t @ me. The Reserved List is never going away and I promise you don’t have a better argument than I’ve already heard. Deal with it. Instead of whining that you’ve been playing Magic for 6 months and you think Vintage looks kinda cool but you can’t play it, which is total BS, let’s focus on how we can use the Reserved List to our advantage.

What I’m NOT Advocating

I’m not advocating a targeted buyout. You won’t get that advice from an article – you’ll need to hit up YouTube if you want advice on that. Picking a card with low supply and getting a ton of money or a ton of people together to try and corner the market on something that can’t be reprinted is not something I advocate. I realize you and I are greedy speculators out here manipulating the market or whatever but I think there’s money to be made sustainably. I make 90% of the money I make in MTG Finance from flipping collections anyway, so there’s no need to sell my soul to make that 10% of my business a little better. If you advocate or participate in a targeted buyout, I hope you develop tinnitus that’s so bad you need to sleep with a fan on to drown out the noise from your tinnitus and then you’re cold all night from the fan and it makes you have bad dreams.

What I AM Advocating

Don’t wait on stuff you want, and if you notice something start to get a little bit better, buy now. Don’t panic, but take that pile of crap on your desk you’ll never use, send it to Card Kingdom, get that trade-in bonus and get copies of these Reserved List cards if you think you’ll need them. Buy extra so you have copies to play with and look like a genius when you can trade them back out after they go up. Do I think anything is getting more play now than it used to? I doooo.

How I Stumbled Upon This Card

I was at a loss for what to write about and almost settled on writing about Etali. Now, I think Etali is amazing. I think it’s stupid good and should go in every EDH deck that can reasonably ramp to it or cheat it out, no questions asked. However, I’m not super psyched to run it as my Commander. That puts you in Mono-Red and it’s difficult to ramp in Mono-Red. You have stuff like Braid of Fire but beyond that, you’re using one-shot spells like Seething Song to ramp. I wasn’t convinced, but then I remembered artifacts were a thing. THEN I remembered EDHREC had updated for the new cards and someone has probably already solved this problem. They have. All ingenious-like. 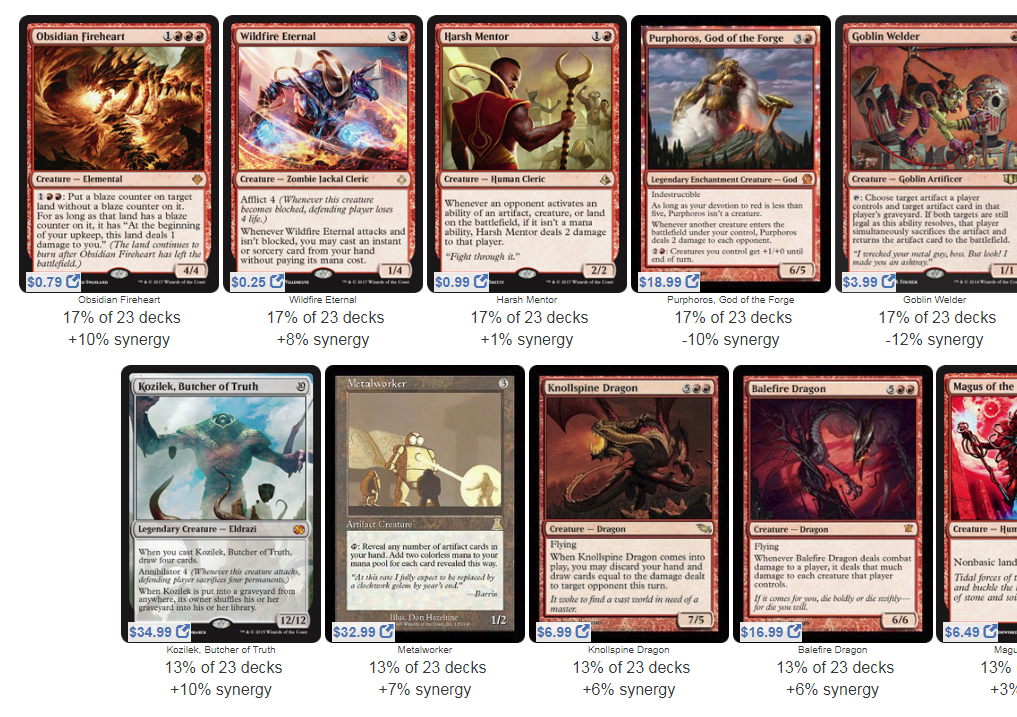 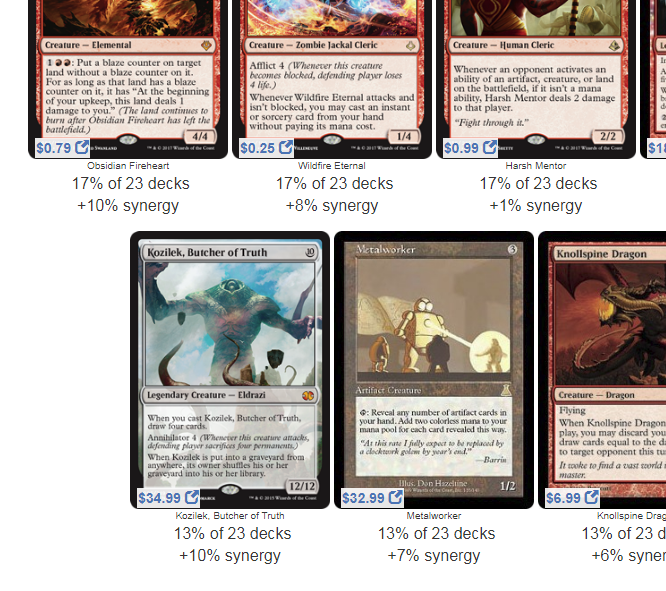 There’s no reason not to run mostly artifacts in your Etali deck because Mono-Red sis both sort of trash in EDH but also sort of great as a support color for Artifact decks. If you’re mostly brown with a splash of red like the well-done steaks with ketchup the worst person on the planet eats, Metalworker is WORKWORKER doing all kinds of work in your deck and ramping you to Etali on like turn 3. Get some. 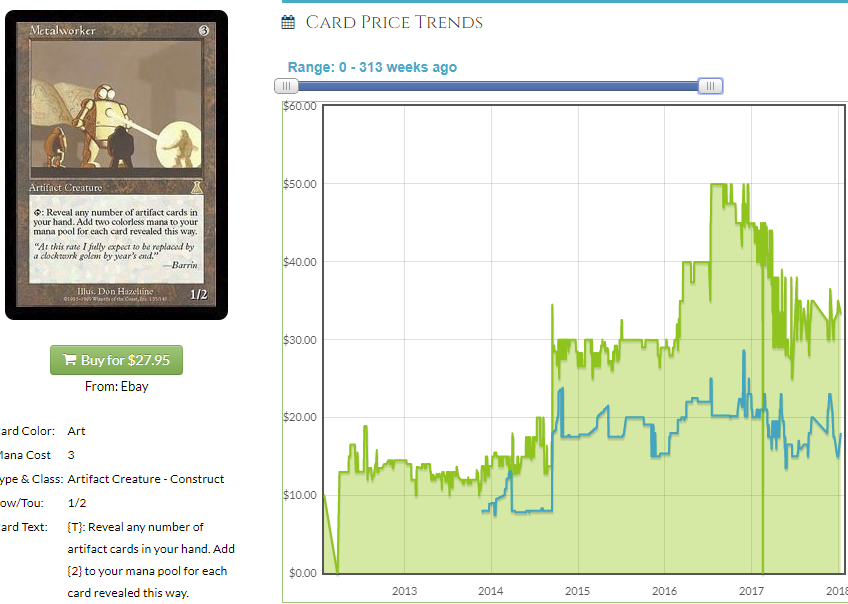 If you think you’ll want Metalworker anytime soon, it’s demonstrated an ability to hit $50 on hype, and hype did us all a favor. It cleaned all of the sub-$30 copies out from all of the easy-to-reach places. If movement starts in again, the second spike will be harder because there will be no cheap copies to backfill demand. I think this makes a case for itself. What else do I like? I’m so glad you asked.

Lake of the Dead 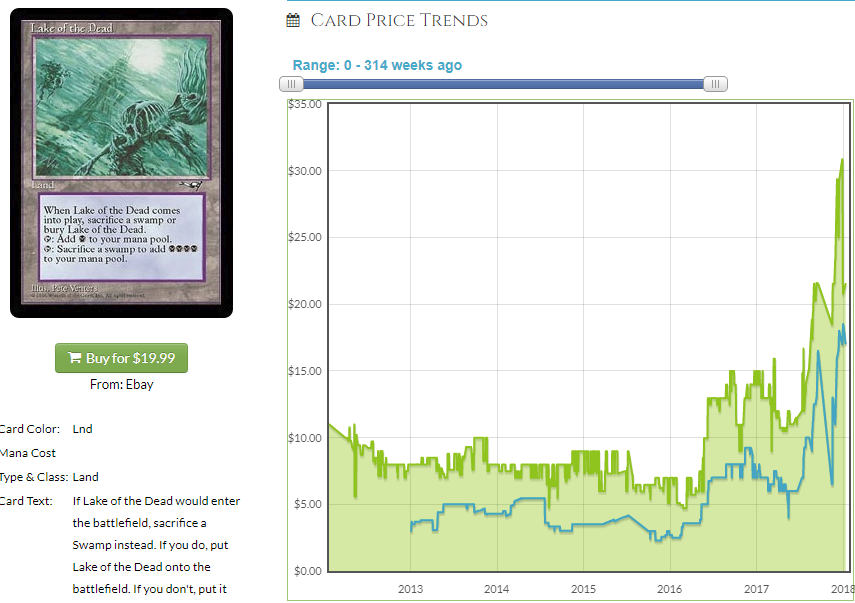 Apart from a few cheap eBay copies, this is basically $30 everywhere or it’s sold out. The Gitrog Monster made this go up but it’s never going back down. This taps for a ton of mana in EDH and if your deck either doesn’t care about your dead swamps or it thrives off of them, you’re going to get a ton of use from this. I made a convincing case for this like 8 months ago or whenever the Gitrog Monster came out and since then it’s gone from $10 most places to $30 most places. I hope you bought in at the time. If not, I think the $20 copies on eBay are pretty tempting and apart from that, you’re stuck paying $30. This seems obvious, even though it just tripled.

Retribution of the Meek 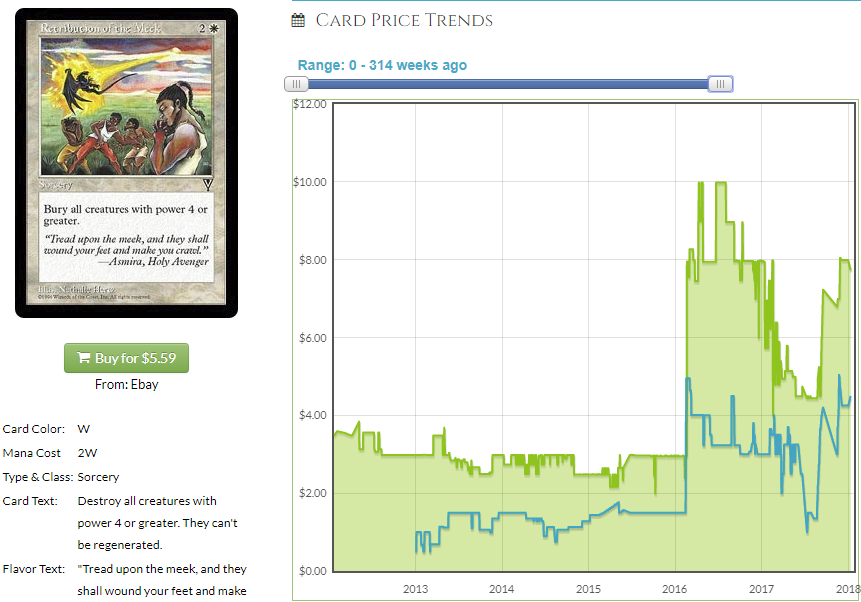 A lot of stuff went up on principle a while back and while this is cooling off a bit, second spikes happen fast and supply of this card id drying up again. With EDH so often being such a dumb, durdly format and everyone building dinosaur decks, Retribution is a great choice for wide strategies than have a lot of lower-powered creatures and want to clear a bunch of big blockers out of the way or just be the only one with creatures. This is on my radar right now with all of the Dinosaur decks I see being built. 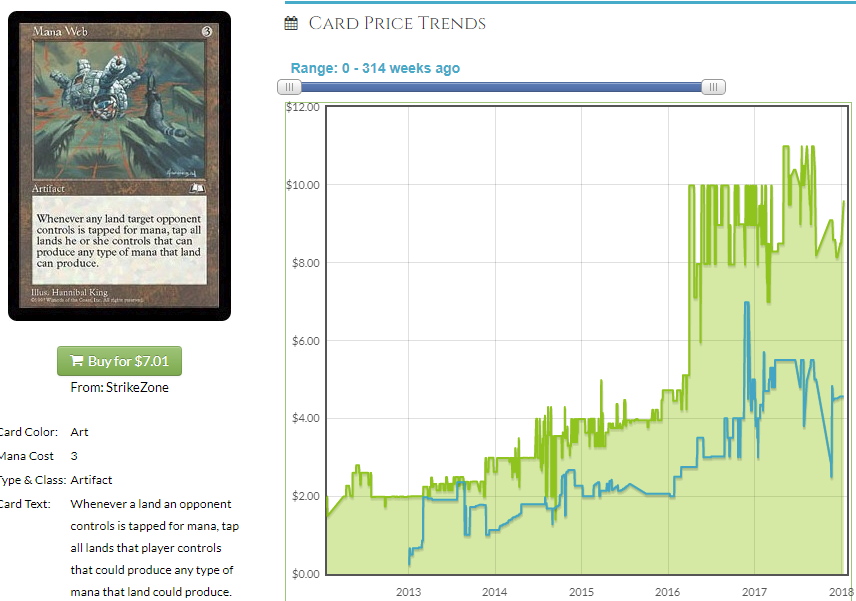 Either I’m running out of steam or these cards just really speak for themselves. This is a good card, it’s going to get more expensive. Buy it now if you need to. 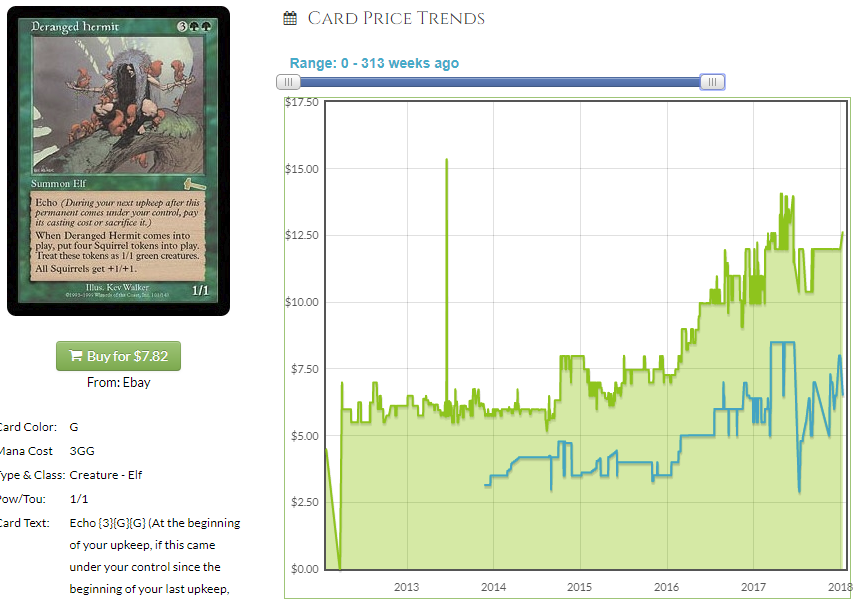 The amount of overlap with EDH and casual is kind of small, but this bears mentioning because we just got new squirrel tokens with Unstable and with the foil tokens going for $7 online, SOMEONE is playing with Squirrels. This is an OG Squirrel master and it’s never getting reprinted. Take a look at Judge foils while you’re at it. They’re half the price of the $100 set foil and supply is dwindling as well.

That does it for me this week. If you have some Reserved List picks you think I should have discussed, hit me in the comments.* See you next time!

*Try to imagine what I wrote in the half a paragraph I just deleted. It involves opinions about the Reserved List and what readers can do with those opinions.