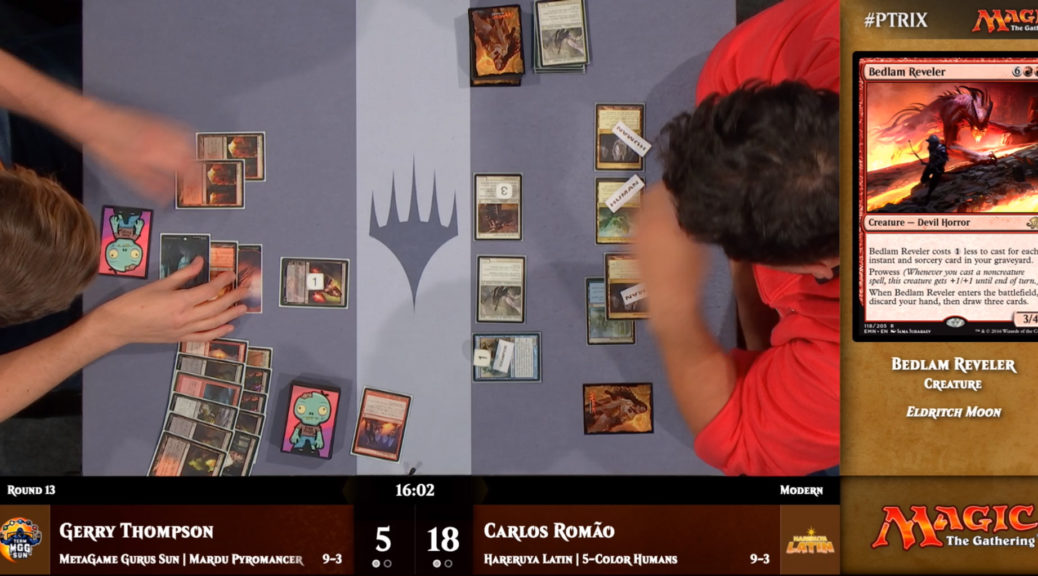 So far this weekend at Pro Tour: Rivals of Ixalan, we’ve seen our assumptions about Modern play out pretty much as expected. The field of pros was largely unable to table a definitive solution to a format with this many viable decks and the Day 1 Meta breakdown demonstrated this clearly. 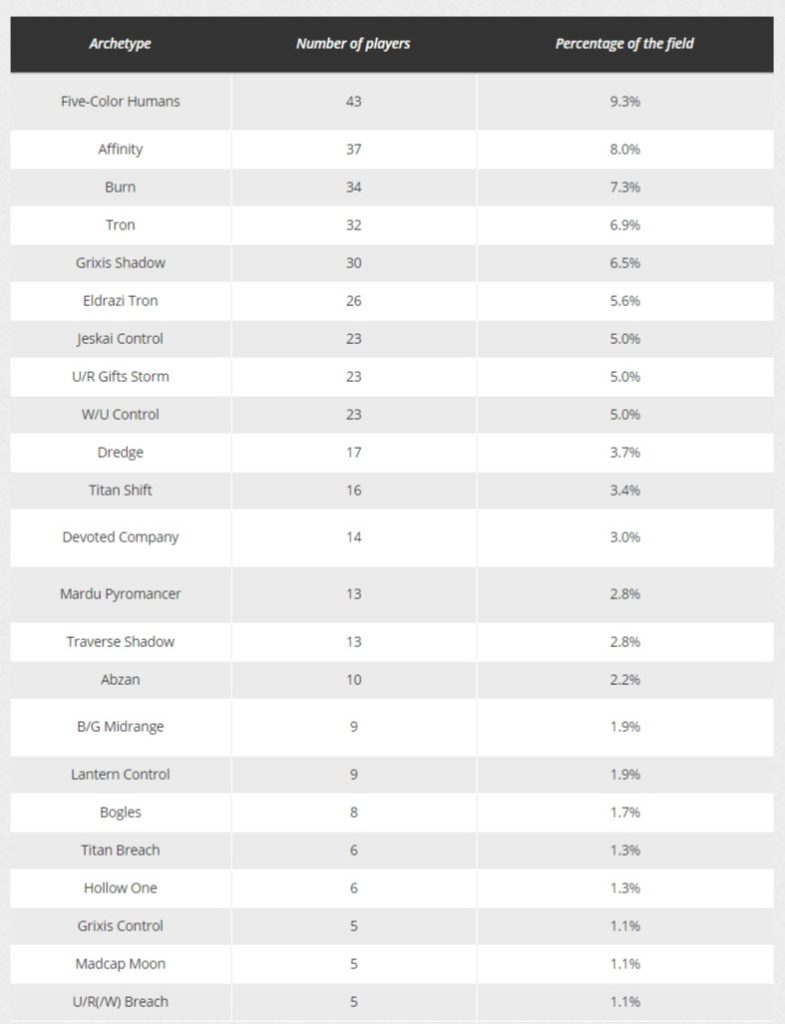 An amazing 23 (!) decks made up at least 1% of the field coming into this weekend which is a far cry from what we’ve seen in recent seasons of Standard. It also illustrates why the pros seem to have gravitated towards playing the decks they know best rather than attempting to out maneuver the meta with a fresh brew. With so many possibilities, meta gaming must bow to skillful play.

5C Humans, Affinity, Burn, Tron and Grixis Shadow made up the largest slices of the field, but none of them represented more than 10%, and combined the Top 5 archetypes were still less than 38%,

In a field like this our best bet is to focus on emerging tech foils and multi-archetype staples that are in low supply.

So far we’ve already seen several of the foils for 5C Humans dry up and sales should be solid heading into next week if the deck does well in Top 8 and solidifies it’s position as part of the Tier 1 Modern gauntlet.

To attempt to figure out what might move this afternoon as the Top 8 is settled, we should take a look at which decks boasted the best Day 1 to Day 2 conversion rates. 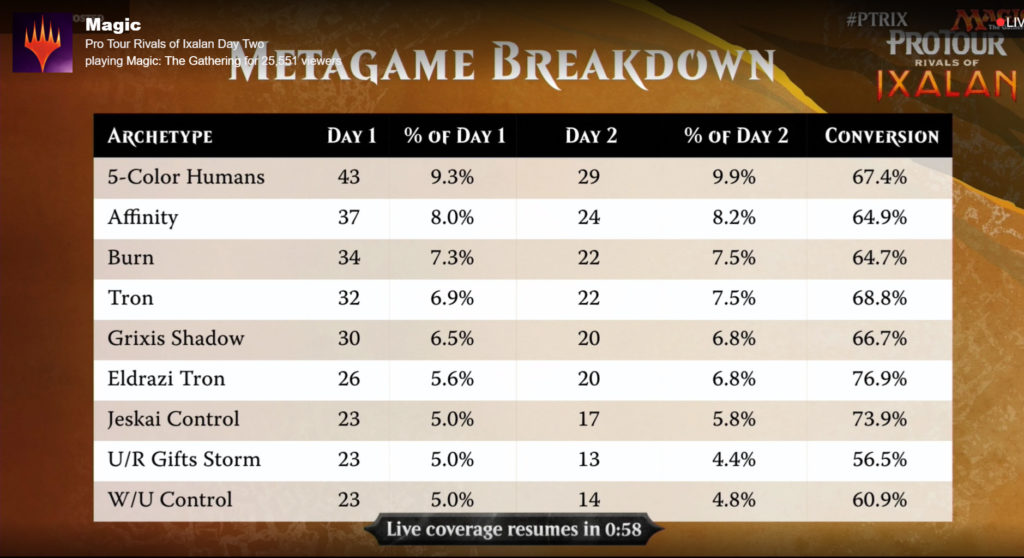 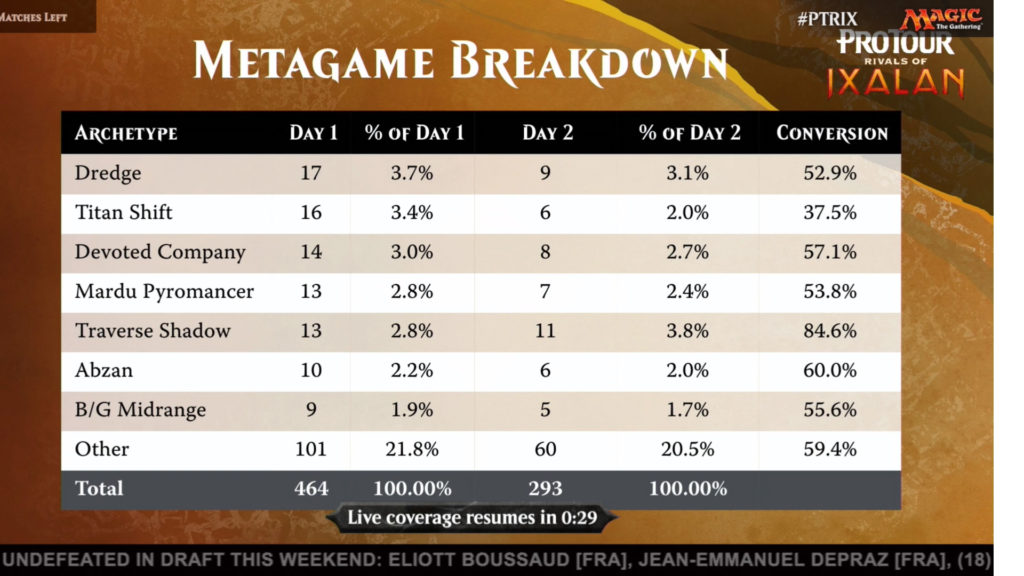 First, let’s flag the worst performing archetypes so we know what to consider avoiding in spec land:

Despite Gerry T’s deep run with Mardu Pyromancer, the conversion rate for the deck overall should give you some pause on speculating in that direction. Primal Titan doesn’t look like a great bet, and the field seemed to be ready for both Dredge and Storm strategies.

The Top 5 conversion rates belong to:

Despite a relatively small sample size, it could be that the Traverse Death’s Shadow builds may have been underestimated coming into the tournament. Traverse the Ulvenwald foils are still available around $10, but supply is pretty shallow and this card also sees solid demand from the Commander/EDH scene. Modern Masters 2017 Death’s Shadow foils are also relatively scarce, and could make a move towards $20+ from $12-14. The fact that there are two versions of the Death’s Shadow decks also provides some insulation against meta shifts on that spec.

Both of the main flavors of the Tron builds were top converters which further entrenches that archetype as one of the giants of the format. With most versions running multiple copies of Wurmcoil Engine as their mid-tier threat, you might want to have a look at how few Masterpiece copies are still floating about under $90, with potential to push $120-$150 this year. Other versions are also worth a look but I’m a bit worried that this card could show up in Magic 25 this spring. Karn Liberated hasn’t seen a reprint since Modern Masters 2015, is often played as a 4 of in Tron builds and only has two printings total, so should it dodge a reprint in Magic 25, a move on non-foils from $70 to $100+ on low supply could take place. For the record I think a reprint in the first half of 2018 is likely, but roll the dice as you may. Ugin, the Spirit Dragon hasn’t yet seen a reprint outside his promo version, and I’d bet on Karn seeing a reprint first, so picking up a few of these at $30 with the assumption it will get to $50 before a reprint could work out as well.

A quick glance at the Jeskai Control lists would suggest a couple of decent targets. Supreme Verdict is likely to be the best sweeper in Modern and EDH for quite some time, and if you’re looking to pick up a foil, they can be had for as little as $7 after the recent reprint in Iconic Masters. Search for Azcanta has made strong inroads into the blue decks in the format, so you might want to have a look at the foils on these, especially the ultra rare Japanese Buy-A-Box version with the alternate map art on the back.

You can see my notes on the 5CHumans cards in play from the setup article yesterday over here.

If you’re feeling like targeting a long shot, perhaps take a look at Hollow One or Flamewake Phoenix foils from this sexy deck brought to the tournament by Ken Yukuhiro, who is now at 12-2 with a solid shot at Top 8. This deck had a 100% conversion rate to Day 2, on a small sample size. 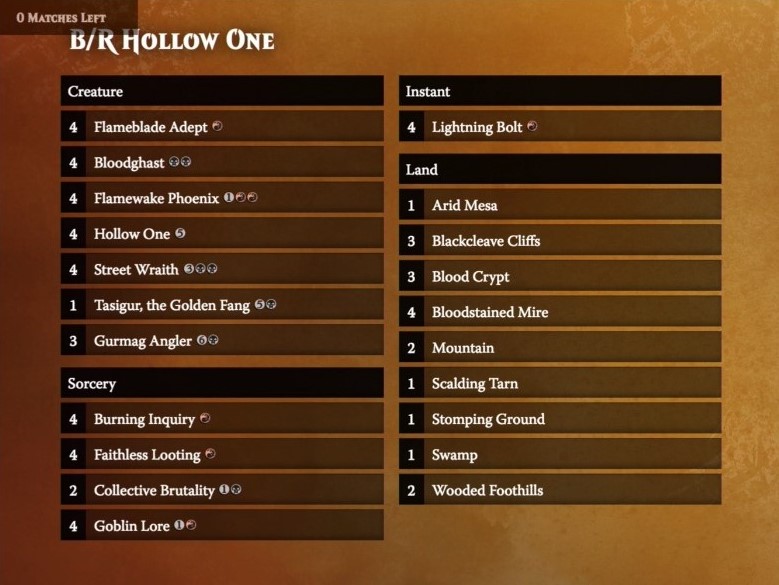 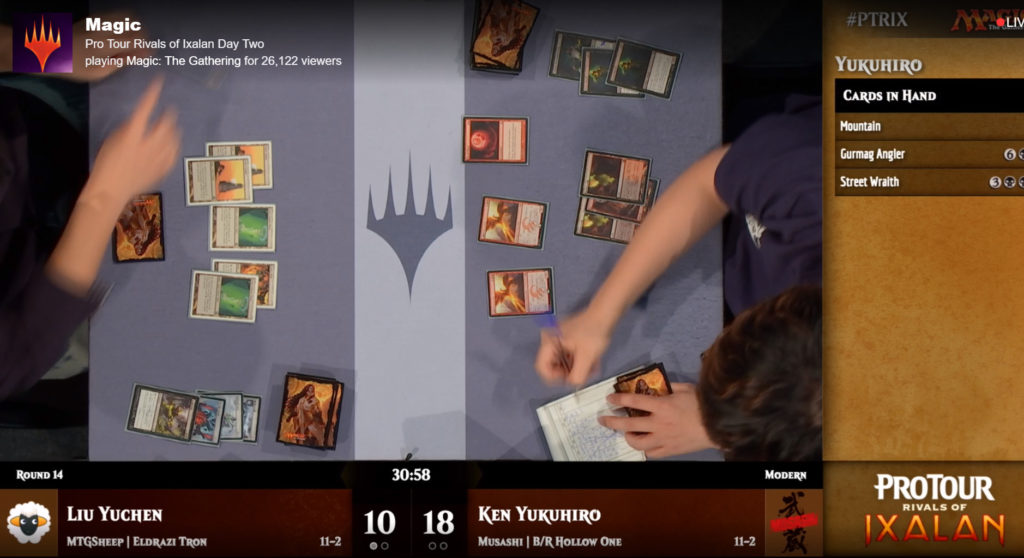 Why the focus on foils you ask? Well, most of the cards mentioned above boast fairly deep supply in non-foil, so foils are the safer shot at leveraging low supply into some profit or savings.

If you’re looking for more specs, take a look at the list of most played cards at the tournament and cross check against supply levels: https://magic.wizards.com/en/events/coverage/ptrix/day-one-metagame-breakdown-2018-02-02 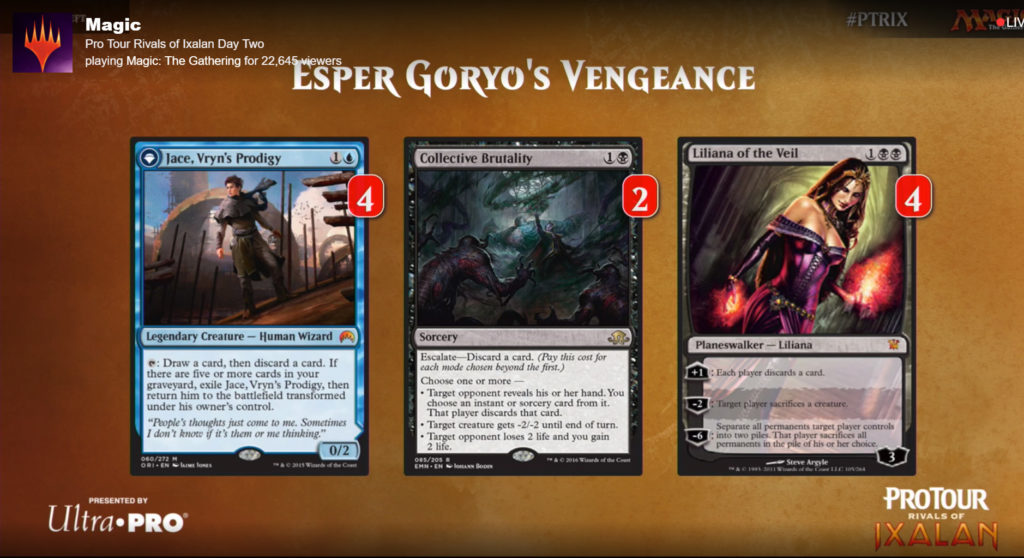 This deck abuses the interactions between Jace, Vryn’s Prodigy and Obzedat, Ghost Council that leave them in play after being brought in via Goryo’s Vengeance.

I’ll be checking back in as we see the Top 8 decks emerge. Stay tuned! 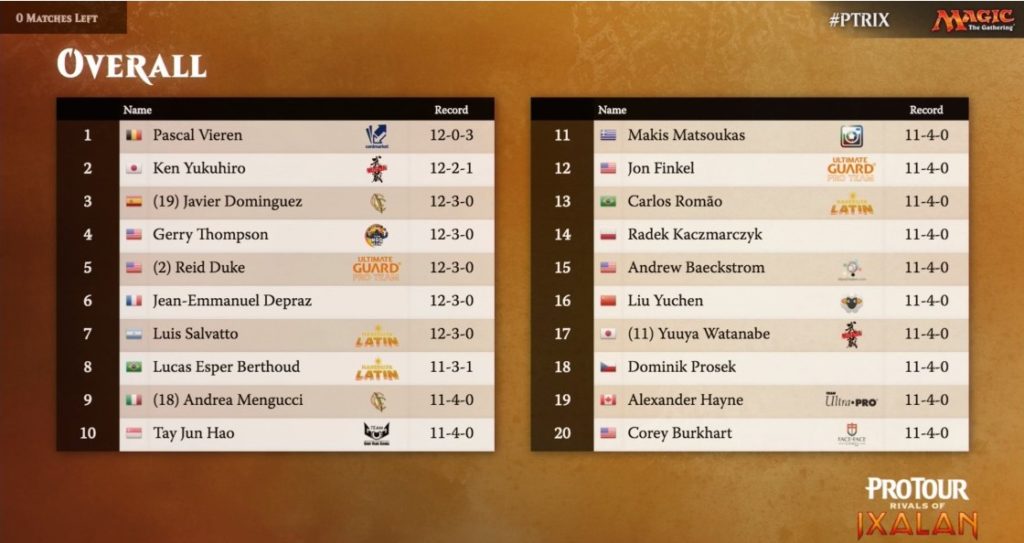 This is a diverse Top 8, typical of the current state of the format and it’s anyone’s guess what will come out on top tomorrow. Keep an eye on the inventory levels for the key cards mentioned above.

One thought on “Pro Tour Rivals of Ixalan: Day 2 Analysis”