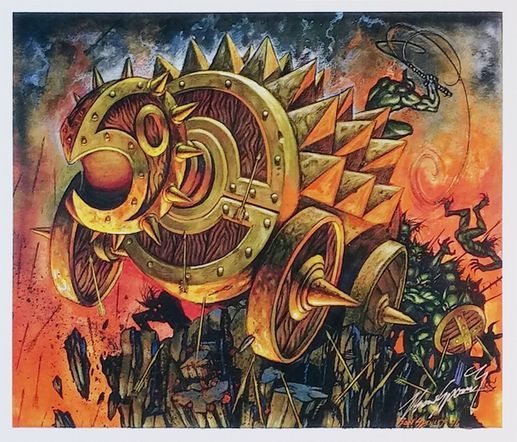 I know we are all going crazy with excitement for Battlebond, whose full card list I believe drops this morning, but our most recent special set is much more on my mind.

You’re thinking that the packs are super-overpriced at $10 and you’re right, but there’s a deeper idea: We are so done opening Masters 25 that it’s time to assess what the bottom of the market is.

We don’t have a lot of hard data, but we have some strong anecdotal data. Boxes are still available for a close-to-distributor-cost of $150 shipped on eBay, off of an MSRP of $240. Currently, 13 of the 68 rares and mythics have a retail value of $10 or more, making the packs a terrible gamble. If you buy at the eBay price, you’re at $6 a pack, but that’s still only 18/68 which make your money back per pack. I don’t like those odds at all, a 26% chance. Yuck.

A much safer alternative is to look at where prices used to be and where they have gotten to, then figure out if that’s someplace to park value until it goes up. So let’s get to the cards!

One caveat, though. All of these are reprints and are not safe from showing up in a Commander deck or some other special set. If they get hit again, you’re going to have to be patient till it comes back, and that might take a long time indeed.

In a lot of ways Thalia is the poster child for what a special release reprint wants to do. She’s very commonly played, across Cube, Modern, and Legacy, and had only been a WMCQ promo since her original printing in 2012. Her stock had been super-high, but it’s dropped by half and I think now is the time to get in.

Her pedigree is above reproach, and the only question is how many copies of her are out there. She’s a three-or-four-of in Modern Humans, a deck that might not be Tier 1 by all definitions but it’s very popular to play and that’s good enough for me. I’m not terribly interested in the foils at around $20-$25, because there’s original foils and the super-awesome close-up version from the WMCQ.

This was exactly the printing she needed to make her price reasonable, and picking her up now in the $10 range means that in a year to 18 months, I’ll be looking to get out in the $20 range.

Now this one carries a bit more risk, but hear me out. Eidolon’s surge in price, especially in foil, was 100% due to the combination of the 4-of inclusion in every flavor of Burn deck but also that Journey into Nyx was not opened in very large amounts, even by the standards of back then. Eidolon’s price has been trending downwards too, but the conditions are there for this to bounce back. It’s not in Legacy much but it’s a four-of in the deck that just won’t go away. I don’t think it’s going to ever spike, but I do think it’s worth getting at this price and waiting patiently. There isn’t going to be another foil printing for some time, and when Burn gets good again, you’ll be ready to sell for $35+.

Quite frankly, I’m a fan of all of the filterlands. They are high on the list for the cards I want to have most in Commander games, because one land enables intensive mana costs. Rugged Prairie is besties with both Kiki-Jiki, Mirror Breaker and True Conviction.

With all of the filters below $10, except Twilight Mire at $11 or so, now’s the time to buy the ones you need for your Commander decks and a few extras for the spec box/your future decks. The value is going to grow slowly on this, and they will likely reprint this in another five years, but there we are.

Foils are not a target for me, as the original foils are high in value and there’s also Expeditions to go chasing after.

I’ve written about RIP before as a fantastic Commander card and one of the best sideboard options in Modern. Yes, it turns off your own graveyard shenanigans, but it hoses some very popular decks and strategies. It’s unconditional, cheap to cast, and has effects that are both immediate and long-term.

The foils have about a $10 gap between original Return to Ravnica and the Masters 25 version, and while I expect that gap to close, I think there’s more to be gained by going in on these at sub-$5 and then just waiting. It made $10 once before, and it’ll get back there thanks to Modern.

A reprint we haven’t seen since Planeshift, this card took a bath and while there’s a lot of inventory now…that won’t be the case forever. It’s already in 7500 Commander decks on EDHREC and it’s as good as you want it to be. An instant, puts into the hand instead of on top of the library as Worldly Tutor does, but it is two colors.

This sees enough play that I like getting in cheap. I don’t want to chase the foils here, as someone who wants foils is probably going to go drooling over the original border foil, and that’s as it should be.

Here’s another card that had a high price only due to the low stock. Saviors of Kamigawa was forever ago, and while this is only in 4500 Commaner decks it’s also a fun-of in the assorted flavors of Taking Turns decks in Modern. There’s a big gap on these, between the Masters 25 version and the originals, likely just due to price memory. No one who bought foils for $20 is going to sell them cheaper, they are going to wait. Same thing for the nonfoils, but a gap this bi9g won’t last forever. The card is underpriced, and you should buy a couple.

Bonus BattleBond Information: The coin-flipping cards are spiking as people realize that some people really, really, REALLY love flipping coins and now we have a legendary set of Partners who love flipping coins. One that hasn’t moved–yet–is Goblin Bomb, which is also on the reserved list. I haven’t bought any–I have a playset left over from when I had an actual coin-flipping deck in 1999–but there’s 45 copies on TCG as of Thursday night and they aren’t going to last long below $5, and I’d expect a spike to at least $10 is not $20, which is what you sell into because the Bomb only deals 20 damage. Quaint, no?