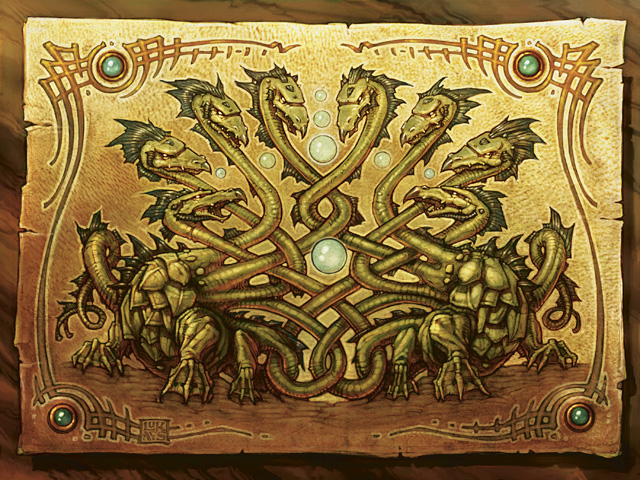 I have some good news for buyers and bad news for sellers regarding Battlebond. Some of the cards are about to tumble pretty hard in value. A lot of them will recover but the cards whose high price is more predicated on scarcity and not playability are going to lose some value. With a small portion of the set spoiled, I’m going to go through a few cards and try to put them into different classifications to help you evaluate what to do with cards as they’re spoiled, help you figure out what to buylist immediately so you don’t take a bath (though it’s probably too late for some stuff) and help you figure out what recovers and therefore you can probably hold. We can also look at good times to buy into reprinted cards to catch the full benefit of that U-shaped graph.

Battlebond looks nuts so far with a ton of cards that are not only good in Battlebond but, unlike Conspiracy’s draft-specific cards that are useless outside of a few lunatics’ cubes, they’re useful in EDH which means packs of Battlebond won’t be hot garbage the way packs of Conspiracy are. We’re not likely to see cards on the level of Expropriate and Leovold but I expect a lot of value to be in the set and more spread out. Let’s take a look at the classes of reprints. 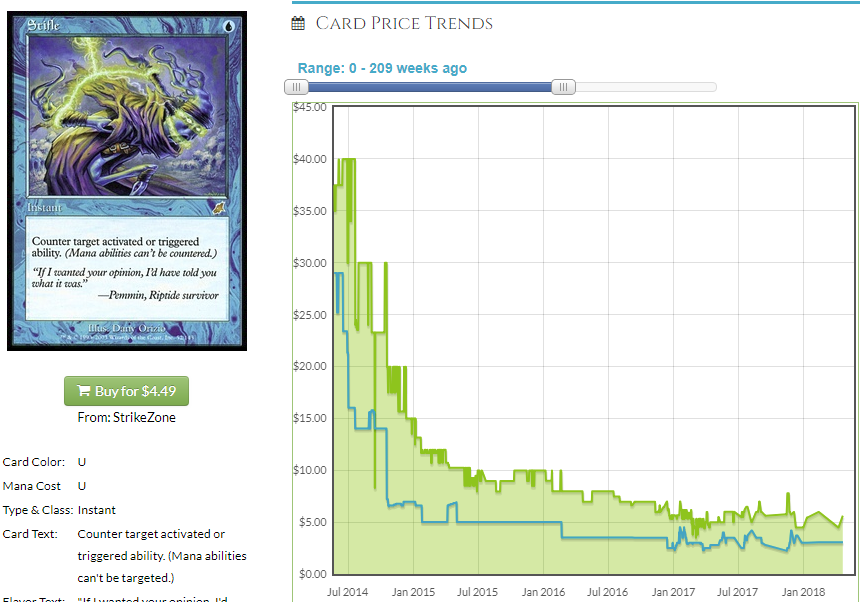 Stifle was riding high at $40. It was a staple in Legacy decks like Canadian Threshold which became a deck again with the printing of Delver of Secrets and people used it to stop everything from fetches cracking to Stoneforges fetching to a third thing in Legacy and since it’s from Scourge, it’s plenty old and there aren’t a ton of copies. With Eternal popular all around the globe, surely there was enough demand for Stifle to justify the $40 price tag and help the card recover after a reprinting in Conspiracy, a set basically no one bought.

Look at that graph. Not only did Stifle tank from $40 to like $5, it’s basically not recovering. It’s been almost 4 years to the day since Conspiracy 1 and Stifle has taken a permanent dirt nap. Class 1 cards are predicated on low supply but there isn’t enough demand outside of the kind of Eternal formats that aren’t really adding new players to justify the price going back up. EDH and Modern are growing, Legacy and Vintage are shrinking and that means that not all reprints are created equal. 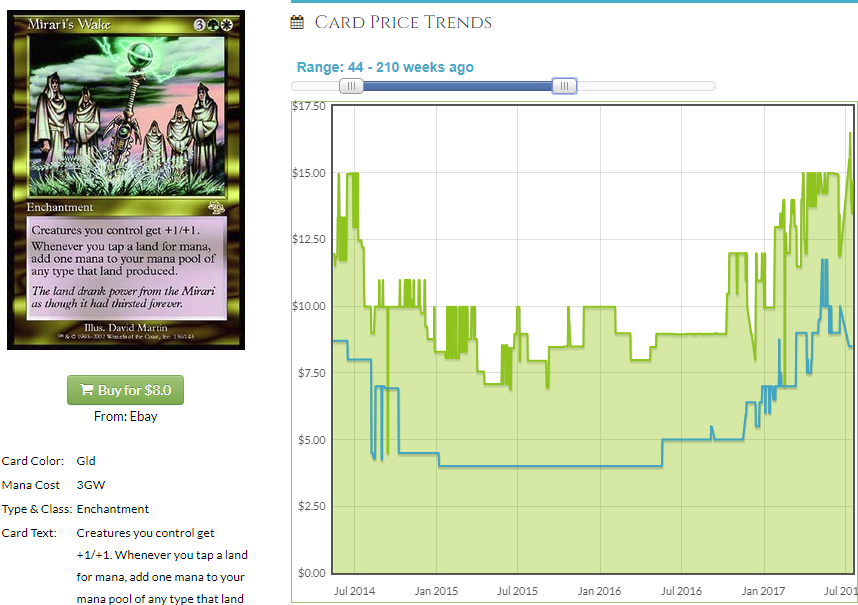 I zoomed in to show the price right before Conspiracy’s reprinting and right before Commander 2017’s printing. Mirari’s Wake did a very good job recovering from the Conspiracy printing, which I think will be analogous to the Battlebond printing we’re about to see. Wake is EDH-playable and it needed another reprinting in Commander 2017 to get the price back down to post-Conspiracy levels and even with that, it’s starting to recover a little. 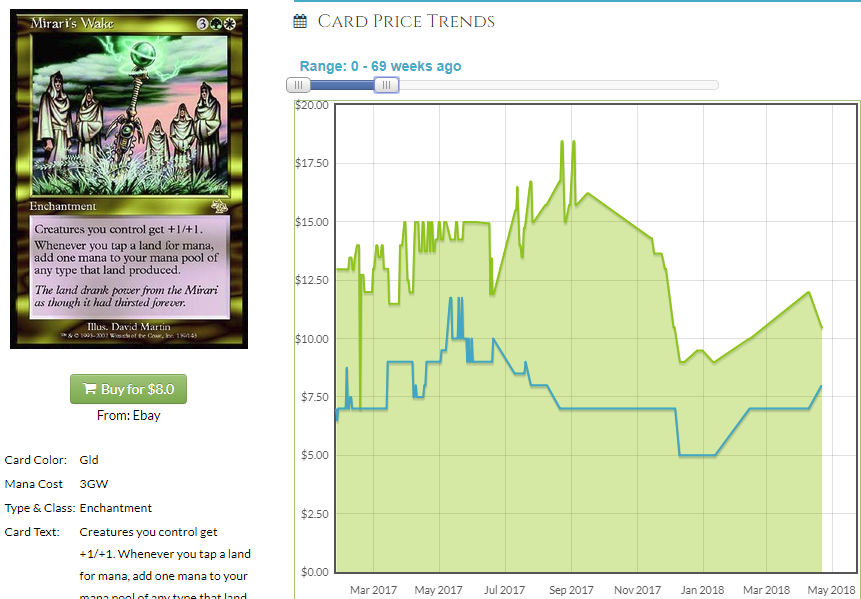 Class 2 cards are much healthier, and identifying which class a Battlebond card is will help us figure out what to trade out of and what to pick up and help keep us from flushing our money down the terlet by picking up a bunch of Stifles. Let’s look at what’s been reprinted so far. Next week when we have the full spoiler, I’ll do this again with the rest of the reprints. 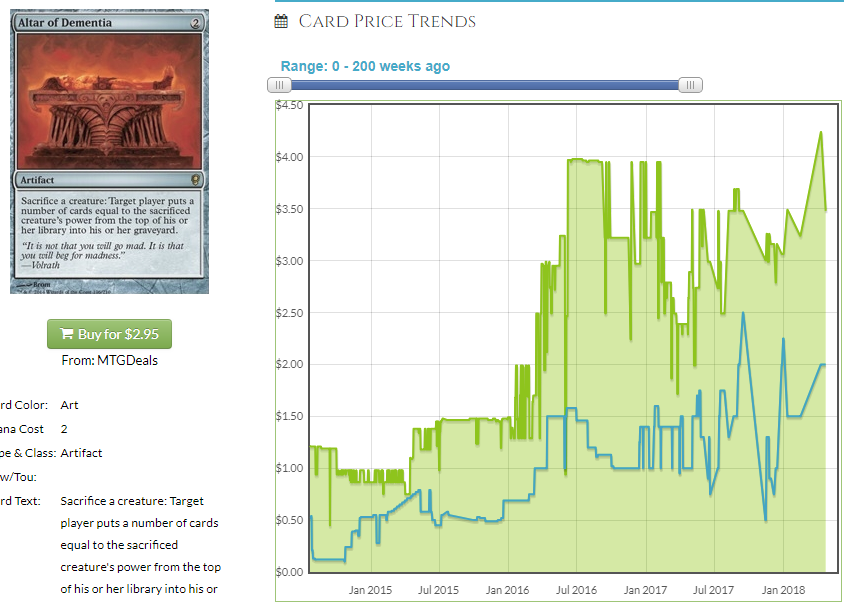 I’m calling this class 1.5 rather than class 3 because I want to make it clear that this will end up doing something between classes 1 and 2. It won’t sit there flat like Stifle did because all of its price was predicated on scarcity and a shrinking format like Legacy and it won’t recover super quickly because it’s an EDH staple and was reprinted at mythic (even if it was printed in a pre-mythic era). Cards that are printed at rare in Battlebond will have a tougher time recovering than stuff reprinted at mythic, irrespective of the demand profile. 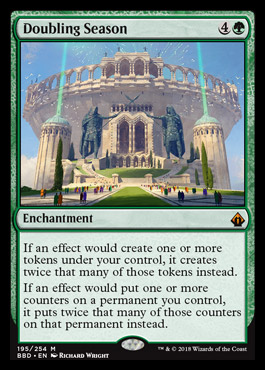 Doubling Season! This card has had quite a roller coaster. 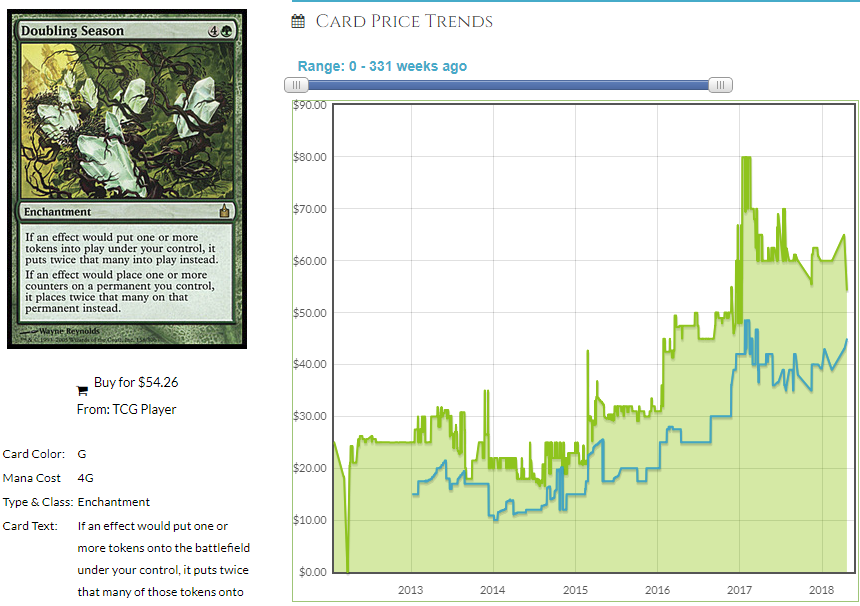 The first Modern Masters printing what, 5 years ago brought it down and demand from EDH brought it back up and demand from boring Atraxa decks brought it WAY up. Doubling Season is going to recover and when we’re at peak supply of this set (basically when people stop drafting it) I think you go in hard. If they’re going to go 5 years between printings of Doubling Season, it’s a pretty safe pickup at its floor and being in a set with $4 booster packs like Conspiracy rather than a set with $10 boosters like Modern Masters will bring it down more than it was brought down before. I don’t know if this will ever be $100 again, but I think however low it goes, it will recover. EDH demand is huge for this card. 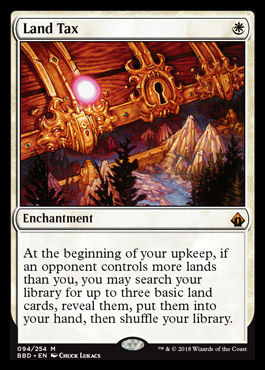 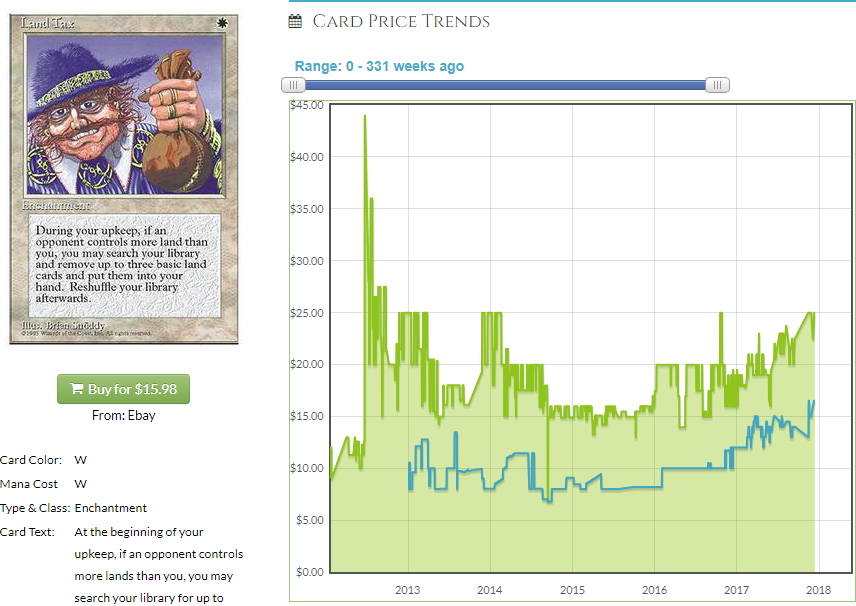 This is a weird hybrid of Stifle and Mirari’s Wake and the price should end up somewhere between those two extremes. Land Tax is a card that’s pretty useful in EDH. 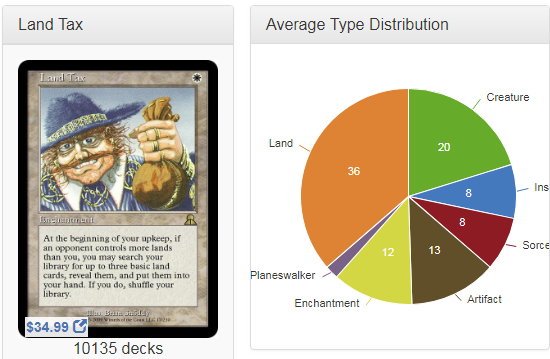 However, the huge price spike wasn’t predicated on that slow, steady EDH demand, it was predicated on its unbanning in Legacy which ended up not really mattering since no one plays Legacy anymore because apparently playing with Watery Grave and Hallowed Fountain will make people catch fire and die so they can’t play the format at all because they don’t have duals. Also, SCG stopped having Legacy events and since they were the only ones doing them, the format is shrinking. It’s still played, but it’s played like Arcade DDR or that weird Russian Roulette from The Deer Hunter, in small pockets of the country that not many people know about. Land Tax will recover more than Stifle did due to its inclusion in 10,000 EDH decks even at its current price of like $25 for a 4th edition copy. Land Tax will drop more than Mirari’s Wake did, most likely, because a lot of its current price is predicated on that huge spike and the associated price memory so even if it recovers a decent chunk of value, it won’t recover as much of a percentage of its current price. That really only means something if you’re holding them now and want them to recover to the price they are now.  You will likely make a decent amount if you buy at the floor and let it recover. This only has about 2/3 of the demand Wake does and its price is predicated on a false spike and some scarcity but you can still make money buying at the floor, but it’s not a slam dunk Class 2 card, either. 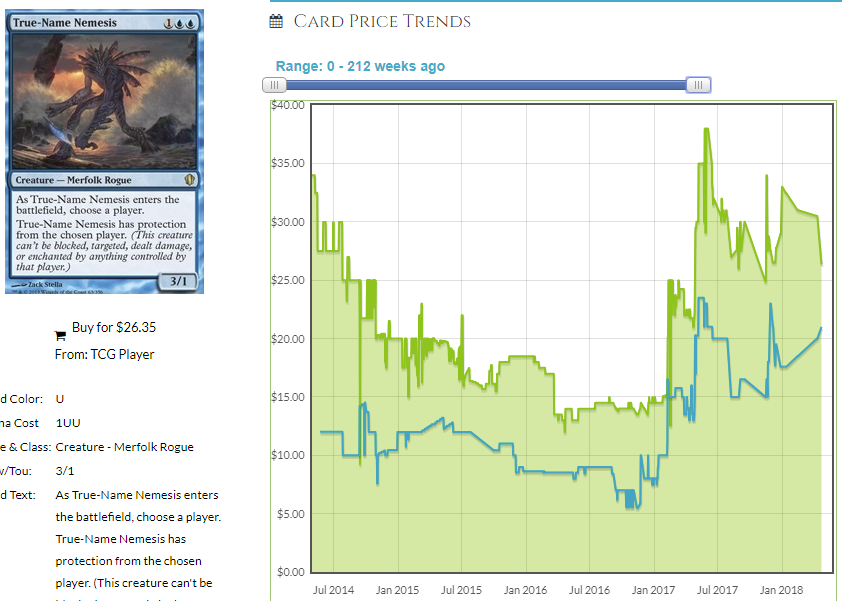 True-Name Nemesis is basically worthless in EDH despite having been printed in an EDH product. The card was designed to be used in Legacy and it was put in EDH product to help it sell, as if the Nekusar deck needed the help. Nekusar became a very popular commander and the Strix printing should be been sufficient, but if they were going to give people Legacy staples, why not give them all of the Legacy staples? Anyway, Battlebond printing this, even at mythic, basically dooms it to a life at its new price. Legacy demand really isn’t enough to cope with all of the new supply and that’s factoring in its recent price correction upward. I think the lack of demand outside of Legacy, which really isn’t getting played that much, means the current demand can’t really handle the new supply and I don’t expect this to recover. It may not be the same price for 5 years like Stifle but it’s not going to recover robustly enough to trifle with it when there are better choices in Battlebond.

One caveat is that foils of this are probably going to be pretty expensive, so bear that in mind. 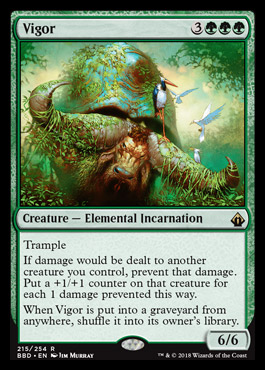 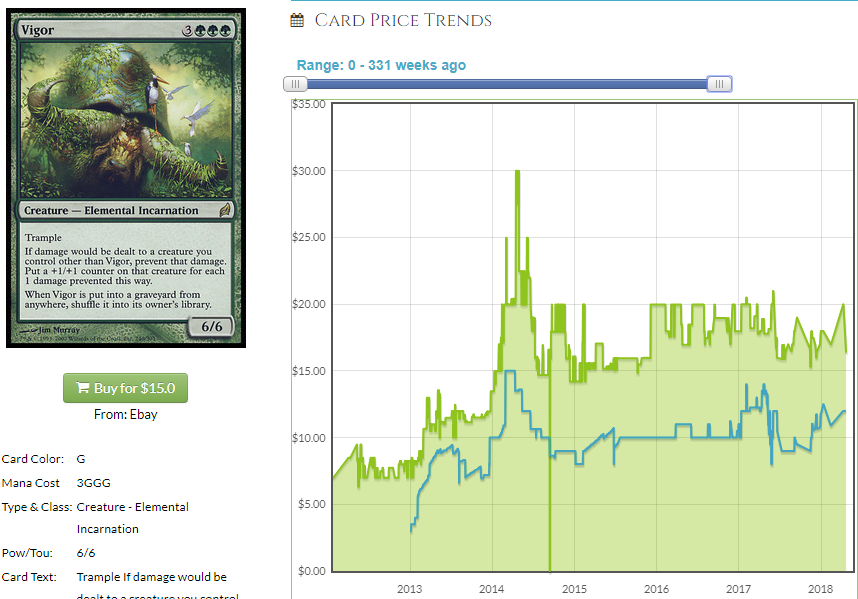 Vigor is one of those cards that was a bulk rare for years until EDH came along and said “This is what we’re about and that mana cost is no object” and its price has reflected that. Even with that weird Garruk/Liliana deck printing, Vigor has maintained $20 for basically 5 years and flirted with $30 at one point. This is likely to tank quite a bit being reprinted at non-mythic rare but it’s going to recover some value. If you buy at the floor and sell when it stops growing, you’ll make money – it’s that simple. Vigor will recover. 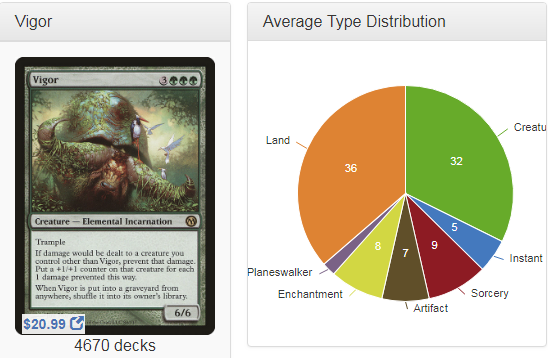 Demand is not as robust as it is for other Class 2 cards, but it’s also a $20 card that was priced out of a lot of players’ decks. If it’s available for $5, even for a few months, this gets priced back into decks and players will become more enfranchised (the stated goal of reprints) which should help its demand profile. People who never dreamed of owning Vigor before join the demand pool, pushing it up. This demand still won’t be as robust as it will be for cards like Land Tax and it’s also being printed way more than those cards being printed at Mythic, so make sure this really hits bottom before you buy in and expect a bit of a longer wait. This is still a card I like as a pickup at its floor. 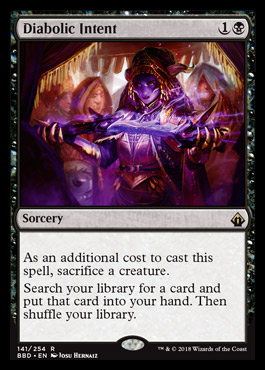 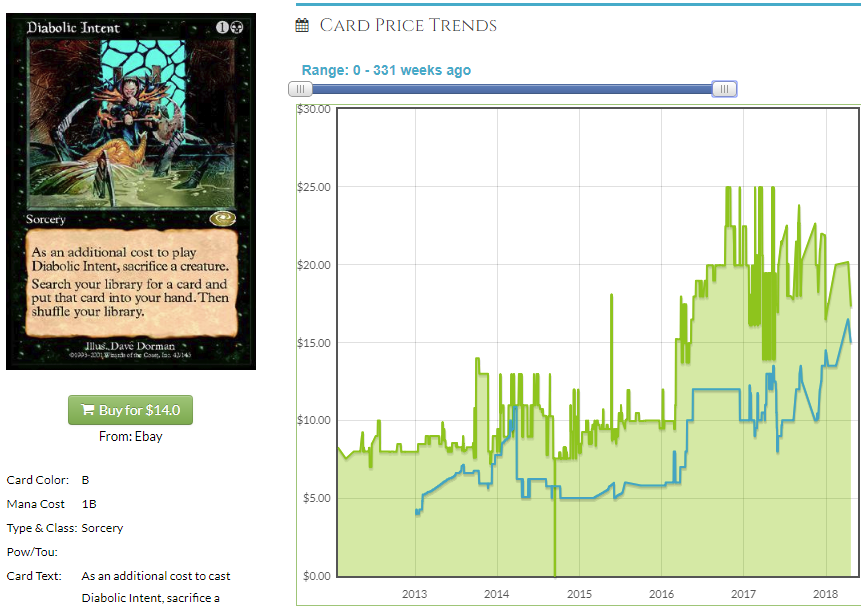 This was a goofy buy, predicated on there not being a smooth way to reprint this and it having dodged a bunch of Commander deck reprintings. Oops. It’s also played about as much as Vigor, which is to say half as much as Land Tax. 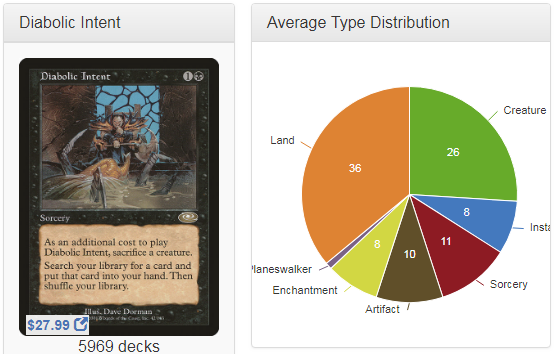 As much as I think the current price is predicated on false pretenses, I also think it has enough of a demand profile to recover in price after it tanks. Whether it’s pre-reprint price is predicated on false pretenses or not is irrelevant to its ability to recover after the reprinting. I think this will do better than Stifle because it’s played in a growing format, a cheaper price like $5 will enfranchise people who were priced out at the $28 Card Kingdom wanted for this card and this is similar in demand to Vigor which I think will recover. I also think this won’t do as well as a true Class 2 card like Wake since it’s being printed at rare. I think this makes you some money and I think you should trade off Class 1 cards for them if you can.

I think that’s all the news fit to print today. I expect a lot more high-impact reprints in this set and I expect it to sell well because it’s amazing and fun. I also have seen dealers are getting heavily allocated. Maybe that’s so they don’t run out and have no resupply like they saw for Unstable. Maybe it’s because they looked at Conspiracy sales numbers and don’t expect it to do well so they aren’t printing as much. Either way, low supply could mean prices recover a lot faster and/or tank less than anticipated. Either way, there’s free money to be made, so let’s make it. Until next time!