You want specs, right? That’s why you read this column. So why don’t I just trust you understand that I understand my methods by now and just give you what you want? Specs.

If you’re a new reader, welcome. I’ve been writing this column for like 5 years and it’s a work in progress. Every once in a while I’ll tweak my methodology but for the most part, I’m going to use EDHREC data to see what people are playing and then I’m going to use my expertise in both MTG Finance and EDH to determine if anything used a lot will be worth more money later by virtue of that playability. That’s it. I don’t know what I try to make it sound more complicated than it is. It’s not like I’m afraid of one of you taking my job and if someone told me “I don’t need you anymore because I learned all I can from you and now I’m going to be the best EDH Finance writer ever!” good, but also I don’t believe you. If you really want to write an EDH finance column I’ll hire you to do it on EDHREC. I mean, maybe.

Anyway, I said no preamble and there I go writing a whole paragraph of it. That was your fault. What happens next? That’s all me, baby.

Lord Windgrace, maybe not to anyone’s shock, is the second-most popular deck on EDHREC out of all of the new commanders. Aminatou to no one’s surprise is number one, possibly Yuriko at #3 is a surprise, maybe not. But as much as Lord Windgrace’s “Lands matter” deck with barely any cards that care about lands was maligned by people during prerelease season, this isn’t prerelease season, this is “I bought the deck, now what?” season and I think “now what” for quite a few people is “Take Lord Windgrace, Windgrace’s Judgment, Turntimber Sower and Nesting Dragon out of a box and throw the rest of the junk away” and that’s fine. The thing is, the deck you can build with Lord Windgrace’s precon minus all of the cards in Lord Windgrace’s precon that aren’t Lord Windgrace is a pretty good one. Lands matter, and people have been waiting for a commander that recognizes that for quite a while. Now they have it and first off, they spiked two cards that really should have been in the precon. 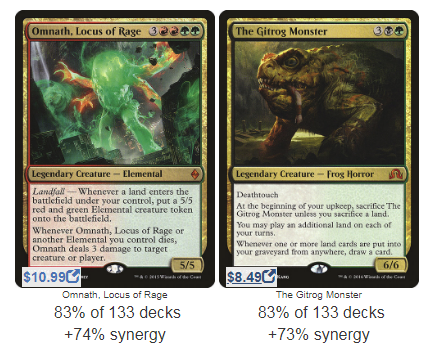 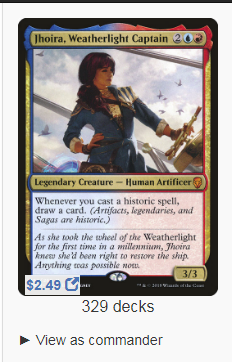 It’s possible. There is a lot of Dominaria out there and this will take a while to quadruple but it doesn’t hurt to stock up on these IF you think this could go up. I’m not 100% convinced, but I think if you can get these under $2, maybe on TCG Player or by trading for them, you could sock enough of these away to make some scratch on a double up in 2 years.

Sorry. Anyway, lands have mattered for a while and with Thrasios and Tatyova making lands matter cards in green matter for a while, we’re looking at stuff that was teetering on the brink of going up getting another push but we’re mostly looking at chasing stuff we should have bought when it was cheaper. I don’t hate Splendid Reclamation around $2 currently, but I liked it a lot more when it was much cheaper a long time ago . 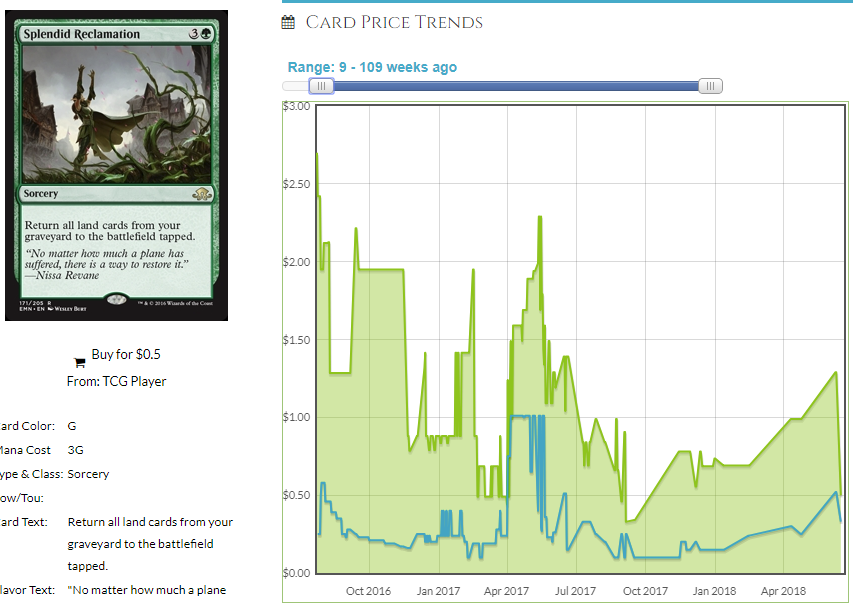 It’s already quadrupled, so getting in late obviously feels bad. However, it’s not done going up, mostly likely, due to every deck that comes out seeming to want to dump stuff in the yard and how many times I have killed someone with this card with Avenger of Zendikar in play.  Amulet of Vigor is pretty good, too.

I still think there is meat on the bone here and I think there will be more “lands matter” cards to come later. I might get out of mine in a year, though, before the next Commander decks come out, but then again, what are the odds they make another deck where lands matter so soon? 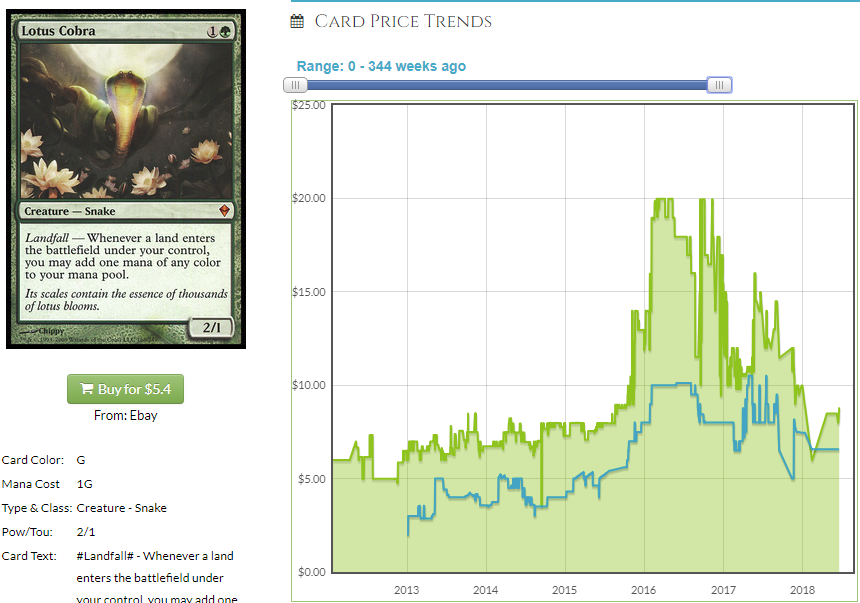 Here’s a little snakeyboi that I think, unlike most snakes, has legs. As a spec. Like, the spec has legs which is incongruous since it’s a snake and that’s funny. Look, I don’t have to impress you. I do have to convince you that Iconic Masters stuff is still nearish its floor and with a Lands Matter deck being super popular, why not play the snake? It’s in half of the 133 decks on EDHREC this week and that’s a good indication that people are aware of it, the Iconic Masters printing has enfranchised some people and we’re going to sell a ton of these at like $13 in a year or two. It has Lotus in the name – this seems like a winner to me. 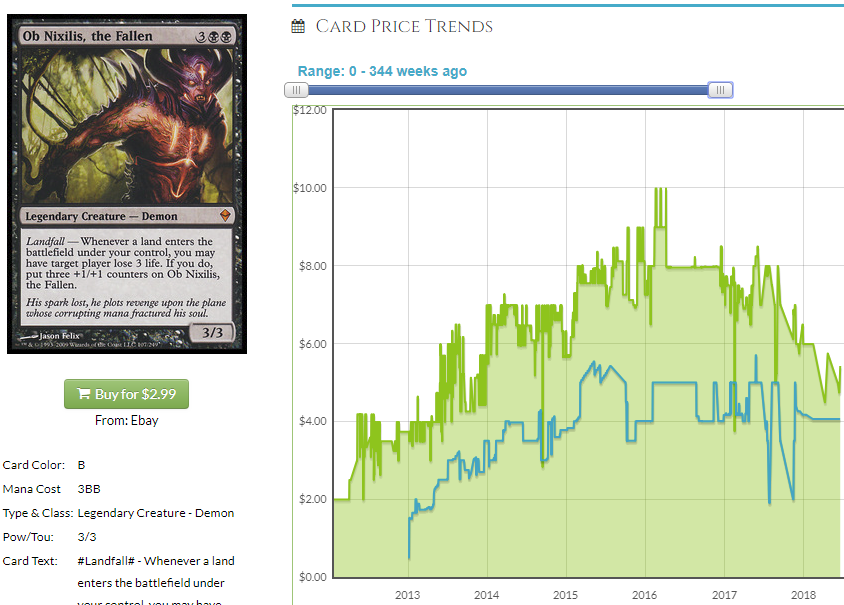 Speaking of cards from Iconic Masters that were originally in Zendikar as mythics and are in a lot of Lord Windgrace decks and will likely go up in price because they were going to anyway but the new demand from a popular archetype doesn’t hurt, I present this. Ob Nixilis basically follows what Cobra does since the cards are very similar in a lot of respects. Total demand for Ob is less, and it’s less likely to break in Modern and therefore it has less upside potential but if nothing explosive happens with Cobra, this is as safe a bet. I like Cobra better, though, because of Modern and how playable it is there. 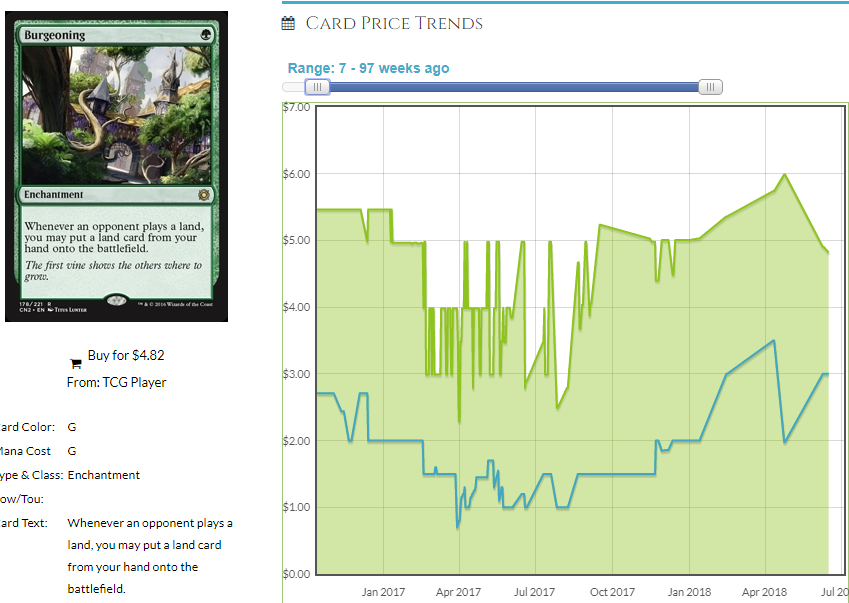 If you look at the robust recovery of Exploration, Burgeoning seems like a great buy. Conspiracy packs are radioactive and supply is peaked so with demand growing every time they print another Thrasios, Muldrotha, Tatyova or Lord Windgrace, even people who bought Burgeoning already will need to buy it again. This is a $15 card, it just doesn’t know it yet. 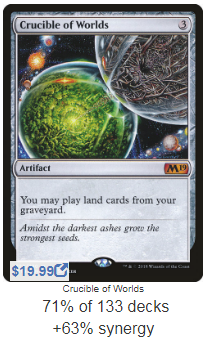 Crucible’s price is pretty established at this point. It’s in a set that doesn’t have very many great cards and we’re getting close to starting to spoil cards from Guilds of Ravnica so at this point, we’re basically at peak supply of M19. A lot of people aren’t as bullish on Crucible but I think at $20, it has some discovered demand. A lot of people cited low EDH inclusion numbers as a reason for being hesitant to take a look at this card, but at $20, it’s much more affordable and it’s pricing itself into decks. It’s also in more EDH decks than Coat of Arms, Illusionists’ Bracers, Paradox Engine and Aetherflux Reservoir and a lot of those decks were registered before Crucible was affordable. 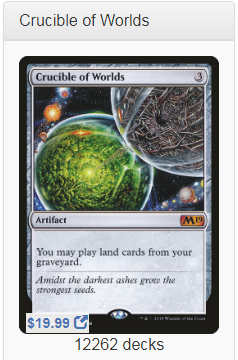 An artifact in 12,000 decks is nothing to sneeze at. If it doesn’t go below $20, it will likely start climbing north of $30 if it isn’t reprinted again. I realize that’s not the sexy “$0.50 into $5” like we saw with Realms Uncharted when The Gitrog Monster was spoiled (or $0.50 into $22 like with Squandered Resources, a Reserved List card that was allowed to be $0.50 because it was 2016) but it’s still a pretty solid card with growth potential and they’re in trade binders right now, more importantly. 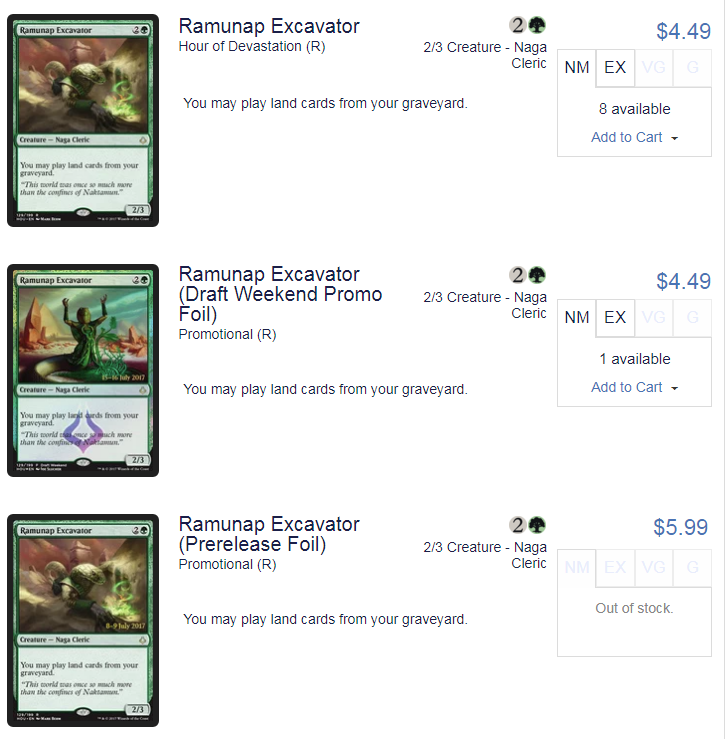 Remember, this card has 3 foils versions (Set, prerelease and game day) and one regular version and they’re all about the same price. I would go for set foil since that’s likely to diverge the most from the non-foil, but it’s hard to go wrong with any version of this. It’s a Crucible, but it’s also a Crucible that can go in a deck that already has Crucible AND you can Green Sun’s Zenith or Wordly Tutor for it. Sounds like a winner to me.

That’s all the news that’s fit to print about our Lord Windy, here. A lot of this stuff went up already by virtue of decks like Tatyova, Muldrotha and Thrasios but there is still money to be made and some of these cards have a lot of potential. Ulvenwald Hydra, Bobo Enraged, Ghost Town, Dust Bowl and a ton of other cards are getting twice the play they were a year ago, so make sure you check prices on stuff you speculated on already.

Thanks for reading, readers. I’ll be back next week, likely to talk about why Brudiclad is so much more fun than Saheeli. Until next time!