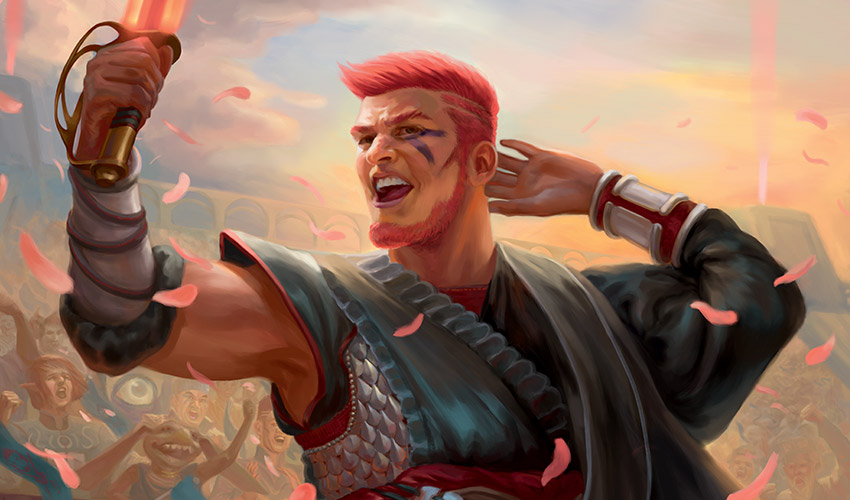 People all seem to agree that a second wave of Battlebond is coming. I looked for a while and the only corroboration I could find was this bitchy tweet and, considering the source, I’m inclined to take it with a grain of salt, but if someone were going to dispute the facts, they would have already and so far no one has. 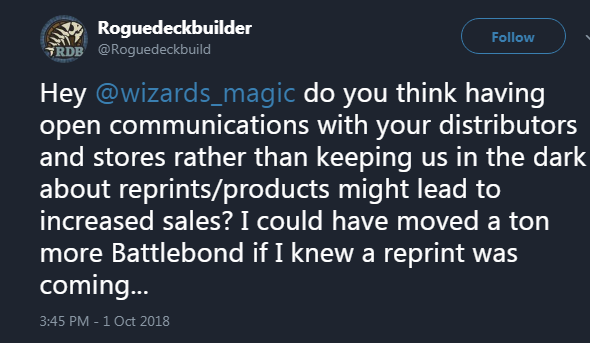 It would appear we’re getting a second wave of Battlebond that, for two reasons, excites me.

If you take the total amount of Battlebond packs over the two printings and released them at a steady rate until they were all gone, the prices would all equilibrate quite a bit lower than they are now. However, breaking it up into two waves with the second wave not even really announced (I suspect they realized they underprinted) and a curious thing will happen. The first wave will establish the price, high, based on the full demand and half of the supply. When the second wave of supply comes in, demand won’t really be satiated, most people won’t really be aware that the second wave is happening or that it’s as big as the first wave and the prices will mostly stay the same. The first wave gave us the $12 Morphic Pool, the second wave will give us hundreds and hundreds of Morphic Pools that we can sell at $12.

A perception of a smaller supply than exists can cause prices to go drastically above MSRP. 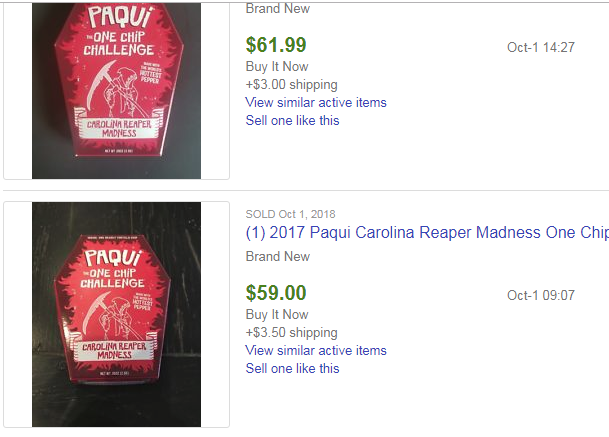 This is what happens when a small batch of $5 chips sell out quickly and end up on the secondary market. I only know these chips sell for so much because we wanted to eat one as a Patreon goal on Brainstorm Brewery. If you want to see Douglas Johnson almost die and Corbin Hosler embarrass himself by being a filthy cheater, check it out.  If you want to see Corbin have to redeem himself by eating a second hot-ass chip (they were so hot, seriously) then check it out.  If they released all of the chips at once, the price wouldn’t be so ridiculous on the secondary market with such a high supply of high price chips, but with release staggered and the total number available unclear, we see a high price that maintains itself.

If you don’t want a chip anecdote because the part of your brain that allows you to experience joy or whimsy is damaged, I can give you another example, and that’s Unstable. The example isn’t unstable, the example IS Unstable. The set. 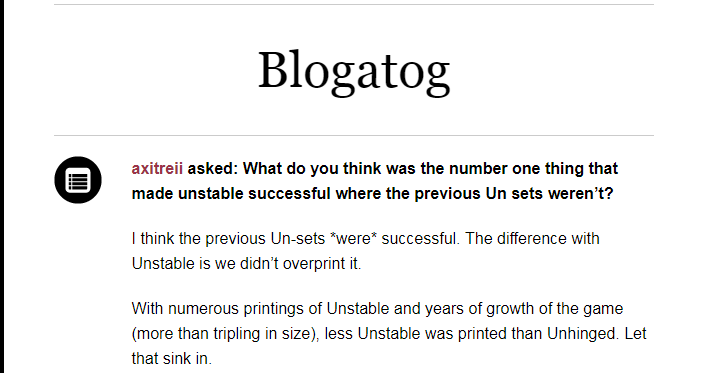 Maro says they didn’t overprint Unstable and they broke it into multiple waves which meant that prices were allowed to get decently high on the important stuff like foil tokens, meme cards and the full-art lands. They learned how to make a set seem like it sold much better than previous Un-sets while selling less of it. The trick? Something they must have failed to do with Conspiracy 2 – they didn’t have a bunch of unsold boxes of a set that people were only interested in for a few weeks. Battlebond appears to have sold much better than Conspiracy 2 by sheer virtue of there not being loose boxes of Battlebond for dealer cost all over the internet.

With a second wave of Battlebond coming, what do we expect?

People are priced out of some of the Battlebond cards, if you ask me. Najeela is $8, the foil is $100 and the Battlebond lands, all 5 of which could go in the deck, are all above $10. A second stab at being able to open some Battlebond hotness saw 15 people make a Najeela deck on EDHREC this week, which is high. Is it that people are updating their list to incorporate Guilds of Ravnica cards?

I don’t think that’s the case because only 3 people have updated with Guilds cards and the cards they added aren’t exactly staples. It seems like the promise of more Battlebond boxes has people jazzed and thinking about the deck. More people built Najeela than Saheeli this week and the ink isn’t even dry on Saheeli.

If there is hype surrounding Najeela and other Battlebond stuff, we should briefly re-look at what’s going on in that deck. 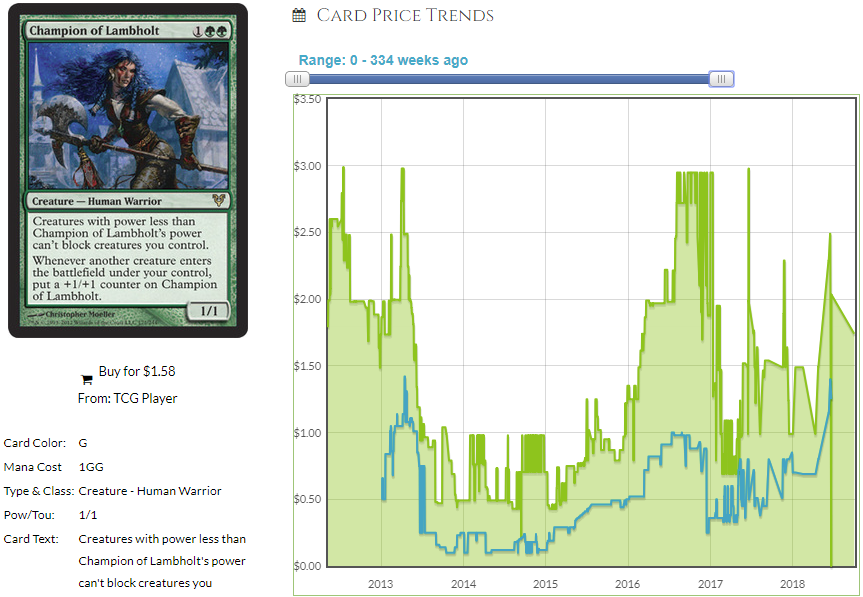 For whatever reason, the Humans deck in Modern doesn’t care about this human. That said, this is also a Warrior, it’s unfair and it is coming off of a reprint and regaining ground fast. If this is left alone for a few years, which I anticipate, this is a $4-$5 card you can currently buy below $2. I don’t like this as much as other picks, but this is a great card to snag in trade or just get for a dime when you tell people you buy bulk rares and you let them tell you which rares they want to sell you for a dime (don’t be a scumbag and tell people their $2 cards are bulk rares). I buy stacks of bulk rares without looking through and when I get home I always find one or two of these and I can live with that.  That party won’t last forever. 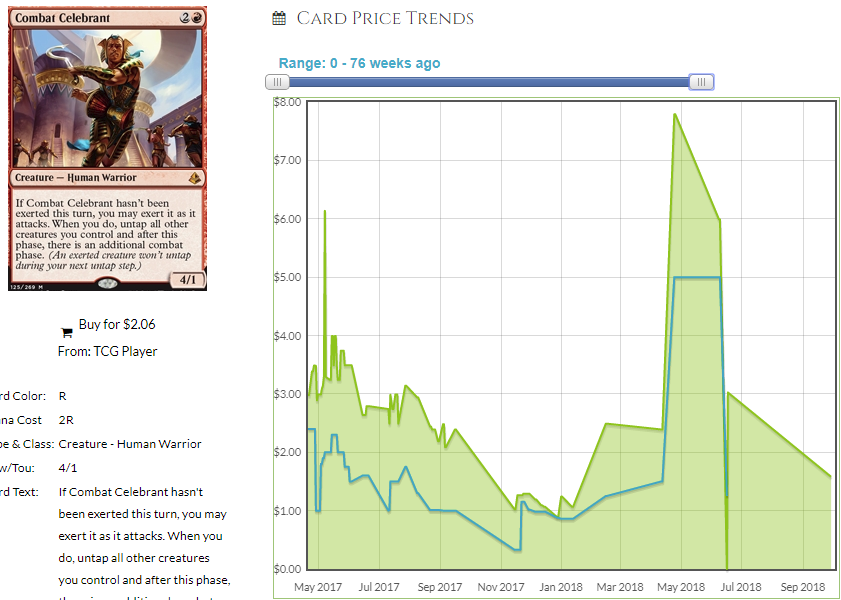 I wouldn’t call what’s going to happen to this card a second “spike” per se but I would venture to guess that this tanks at rotation and approaches $5ish bucks. All of the cheap copies were ferreted out when it spiked the first time and it’s not like people are going to stop doing Helm of the Host stuff in EDH. Celebrant gives extra combat phases to everything and there are a lot of commanders that like to swing a few times and even more that haven’t been printed yet, but will and when they are, people will remember this mythic. 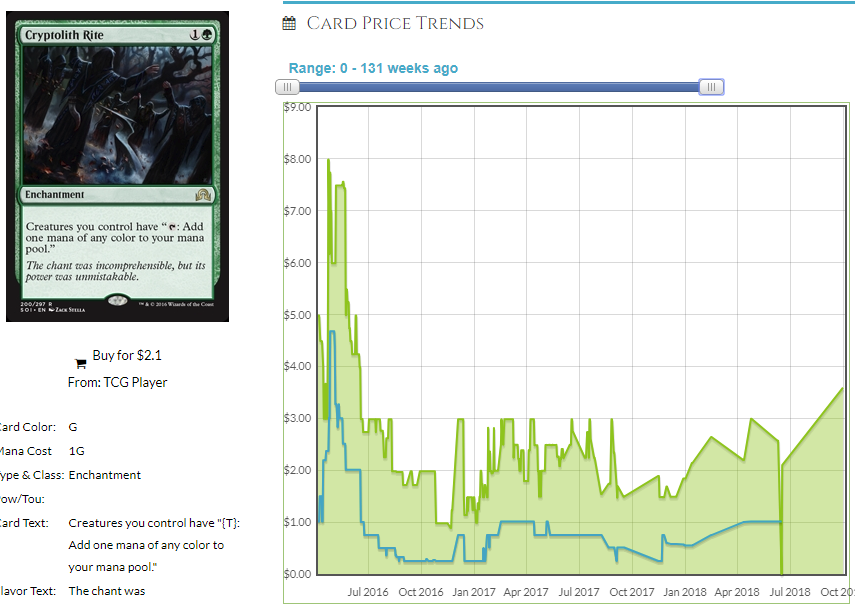 If this isn’t reprinted or made obsolete in the next 24 months, this will sell for $10 on Card Kingdom. I would stake money on that claim.

Since we have EDHREC data (some) for Guilds of Ravnica and my best advice regarding Battlebond singles is “buy boxes as close to dealer cost as you can and enjoy opening a set where there are 10 cards over $10 and multiple $100 foils,” I am going to close today’s piece out with a few GRN picks based on Lazav data. 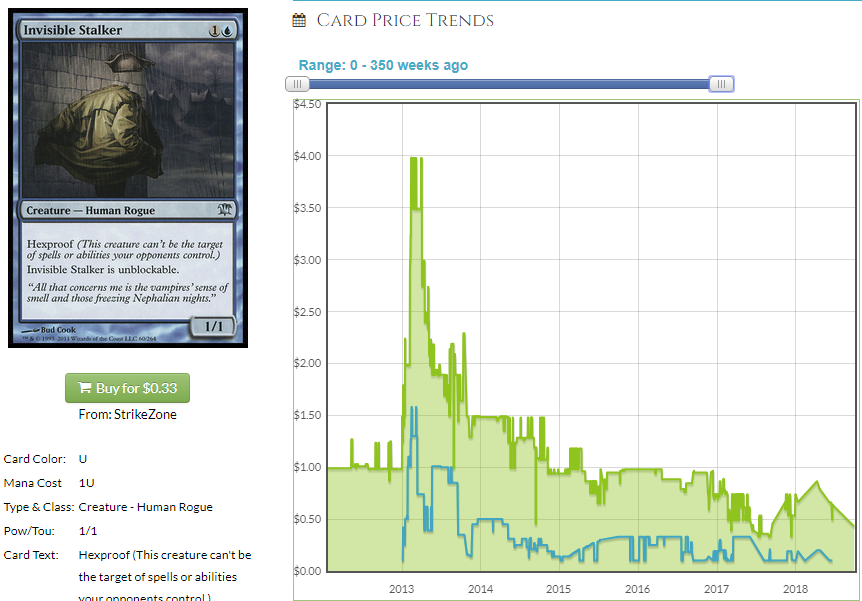 This is also a $10 foil but this unreprintable uncommon from a set with $700 booster boxes (I’m guessing) isn’t getting any cheaper and with demand from both Lazav and Yuriko coming within weeks of each other, expect a brief ramp and then a violent cascade in this card’s price. I realize there are a lot of copies of this out there, but there are a lot of copies of a lot of cards that have been printed more than this and which cost more. This is a $3-$4 card that you’re going to pull out of bulk. 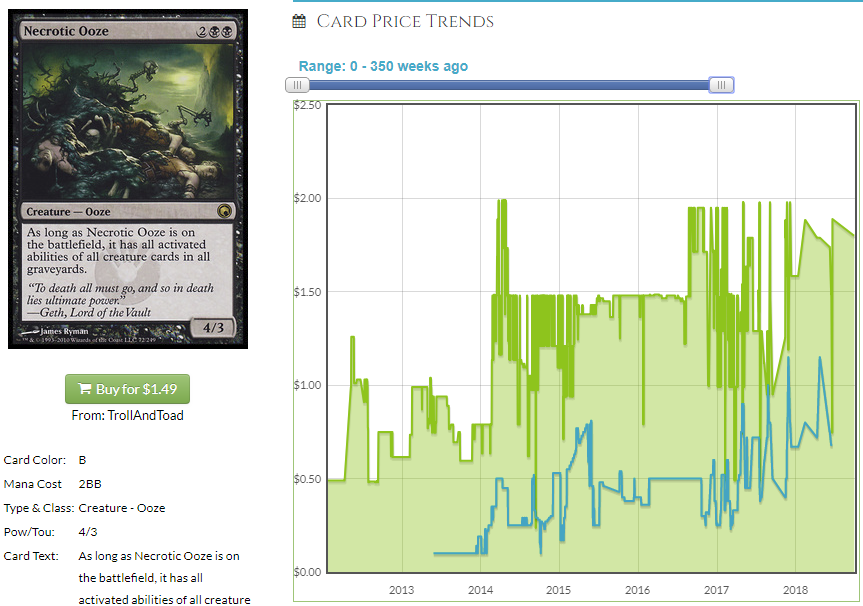 I know I mentioned this last week or the week before but, seriously, this is a matter of “when” and not “if” and you need to believe that. 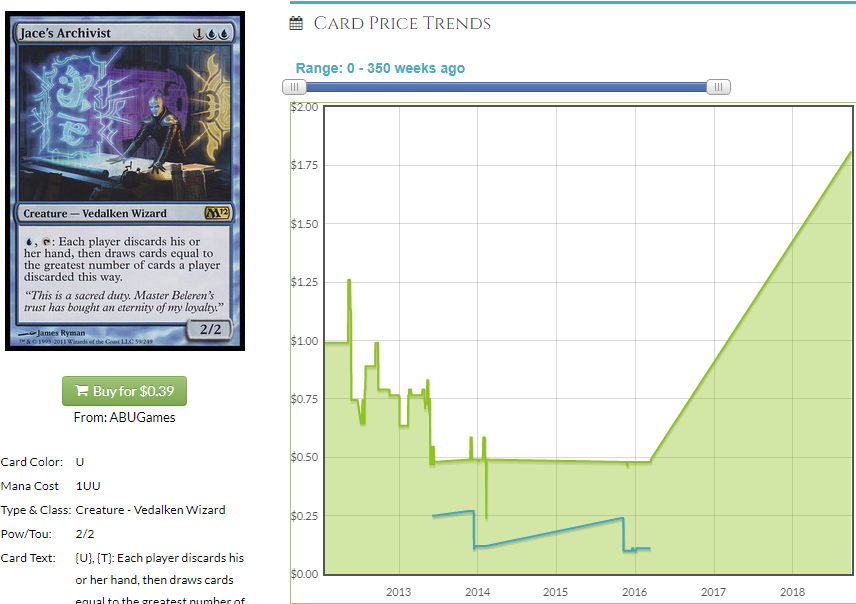 This card is $3 some places and $0.50 others. Which of those two prices do you expect is going to be the one to correct?

Anyway, there’s some picks. I think if you have a line on cheap Battlebond boxes, I might look into getting a case because box EV is pretty nutty. EV is currently over $100 and if you can get $80ish boxes, you’re playing a lottery where every $1 ticket pays $1.20 and there are occasional jackpots. A case makes you reasonably sure to get cards that aren’t done going up like Brightling, Doubling Season, Diabolic Intent, Najeela, Morphic Pools cycle and Will and Rowan. That’s my plan, anyway. You do you.

One thought on “Unlocked Pro Trader: The Second Wave”