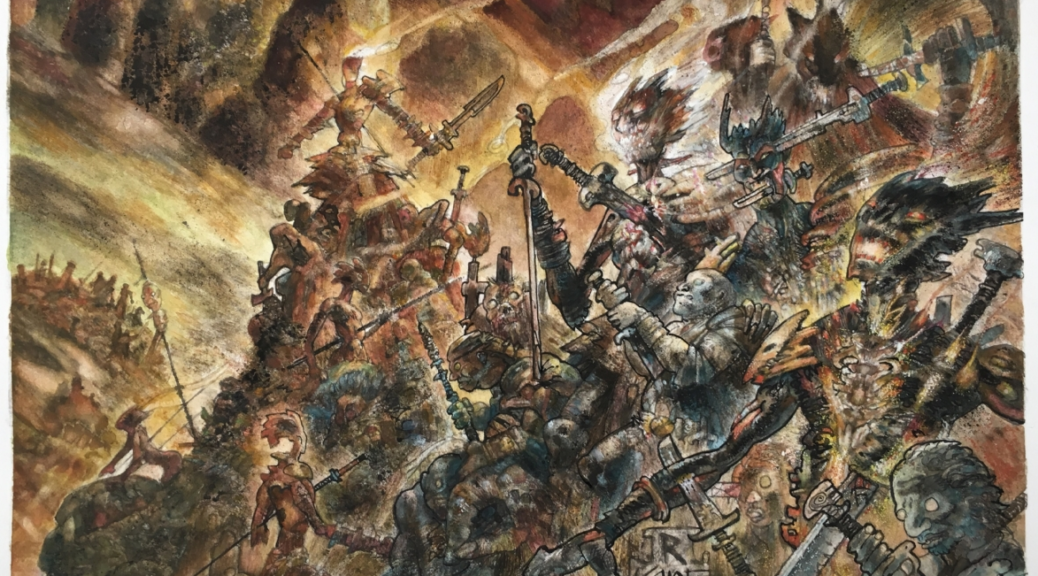 Modern Horizons spoilers have been going bananas. This set is not disappointing. Wizards has managed to include cards for both Urza and Yawgmoth, two new allied color swords, the return of snow, squirrels, and ninjas, forty-something keywords, an insane new Sliver legend, and plenty more. Specs have been going bananas too, and we’re going to have way too many cards to discuss while recording @mtgfastfinance tonight. And this is just the beginning. Once the set is fully spoiled, there will be months of people finding and exploring deck designs that unlock even more cards.

Disclosure: I’ve got a chunk of these laying around.

Many of the new cards have caught my attention. Some are intriguing, but I’m not sure what to make of them. Some I can plainly tell are quite powerful, but I haven’t found the other half of the equation. And some I find the answer on social media almost immediately, and just say “yep.”

Hall of Heliod’s Generosity is a great utility land that’s going to find homes in EDH right off the bat. For two mana you get to put an enchantment card back on top of your library. People are going to be flipping Ghostly Prisons and Doubling Seasons and Omnisciences left and right. Why wouldn’t they be? You always have the choice to, instead of drawing a random card, draw the best enchantment in your graveyard each turn. That’s going to come up often.

The juice comes from Second Chance, an enchantment that sacrifices itself. To what end? Why, to get you an extra turn. And what do you do on that extra turn? Why, put Second Chance back on top of your library! Once you’re fateful hour’d, you can recur Second Chance every turn for a hard lock. From there, you can win at your leisure.

Second Chance’s biggest barrier is that it’s not legal in Modern. Our applications are limited to EDH, Legacy, and the kitchen table. And at 127 current decks in EDH, there isn’t exactly seething demand for it there. In this case, I see that as a silver lining though. There’s virtually no EDH demand for Second Chance right now. What about after a land has been printed that a huge percent of white decks will want to include anyways, that happens to set up an infinite-turn combo under specific circumstances? People that would have passed on it before may swing back around and toss it in, since while it wasn’t good enough on its own, it’s definitely above the cut once you can accidentally walk backwards into a combo.

With supply low and prices in the $7 to $8 range, there’s already some latent demand. Adding this land may fuel the fires in a few spots, and it doesn’t take much to kick Reserve List cards off.

I stumbled upon Rector while looking for cards related to Heliod’s land, and while it’s not exactly going to pop in response, our old buddy the rector is still well positioned. Heliod’s Hall will make its way into plenty of decks where its marginal, and in response, pilots may be inclined to shore up the enchantment theme. It won’t take much either; if you’ve got three decent enchantments in your deck and you want to play Hall, but don’t want it to feel like a waste most of the time, what can you do without adding nine more enchantments? How about you toss in Rector? It’s a single card, but now all your tools for searching for and recurring creatures apply to one that then goes on to find one of your three great enchantments. You’ll go from playing roughly one a game to playing your three enchantments six times a game, just by adding Hall and Rector.

Rector rates at about half the popularity of Grim Monolith, a card of similar age. Grim Monolith is colorless, so of course is viable in every EDH deck that exists, relative to Rector, which can only land in white decks. They both end up at roughly 3% usage, which I’m a bit surprised by. That tells me a two things. Despite costing nearly $200, Grim Monolith sees just as much play as a card that costs less than $60. And Monolith, a generic mana rock, currently costs nearly three times as much as Rector. Both of these point to Rector being underpriced at $60, especially with a new tool for enchantment decks coming shortly.

Also good luck with foils, they’re nearly a grand. If that upsets you, consider how I feel, having found a TCG email stating that I sold four foil Rectors for $80 each three years ago.

One card that’s wrinkling my brain today is Ruination Rioter. His on-death trigger targets anyone with damage, and if you do some work, a LOT of damage. Imagine you’ve got five, nine, or even fifteen lands in your graveyard. You put Rioter on the stack. Without a counterspell in hand, what’s your opponent’s choice? Once it resolves it’s a ticking time bomb, and their only outs are exiling your graveyard and pathing it. Threatening a bolt the whole time reminds me of playing with Shrine of Burning Rage, a card that constantly gave me conniptions during Scars of Mirrodin Standard.

Anyways, I like Rioter, and went looking for ways to make it work. Along the way I stopped on Lord Windgrace’s EDH page, and felt compelled to check out Worm Harvest. The numbers on this guy are tempting. Eventide foils are completely out of stock on TCGPlayer, with the last sold copy at $10. Modern Masters, the only other foil reprint, has less than 20 copies available, most around $1 to $2. It’s going to take one person doing a pass on this to empty inventory and set prices on MMA foils at $6 or more.