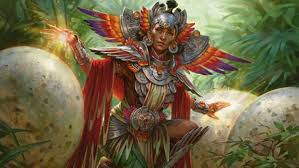 
Nesting Dragon makes eggs and that’s a good thing. It’s also one of the only cards worth anything in the Lord Windgrace deck from last year and that’s good. However, if you can snag those decks for $35 or even better, less, you can get cards totaling closer to $80 if you can get close to a dollar for dollar cards reliably. Realistically, you’ll be able to buylist everything for more than you paid and that’s worth doing, especially if Nesty here jumps to $10. I don’t know how long Atla hype is going to last, but this belongs in 100% of Atla decks. Buy these today.


If Congregation ever gets under a buck again, consider going deep. Something always seems to pop up to make it do something and even though it comes back down, you want to have copies when it goes nuts next time. I don’t think it will ever truly be bulk-tier again but I also don’t think they’re in a hurry to reprint it. Consider the $7 foils on Card Kingdom while you’re at it – they’re closer to $8 on TCG Player.