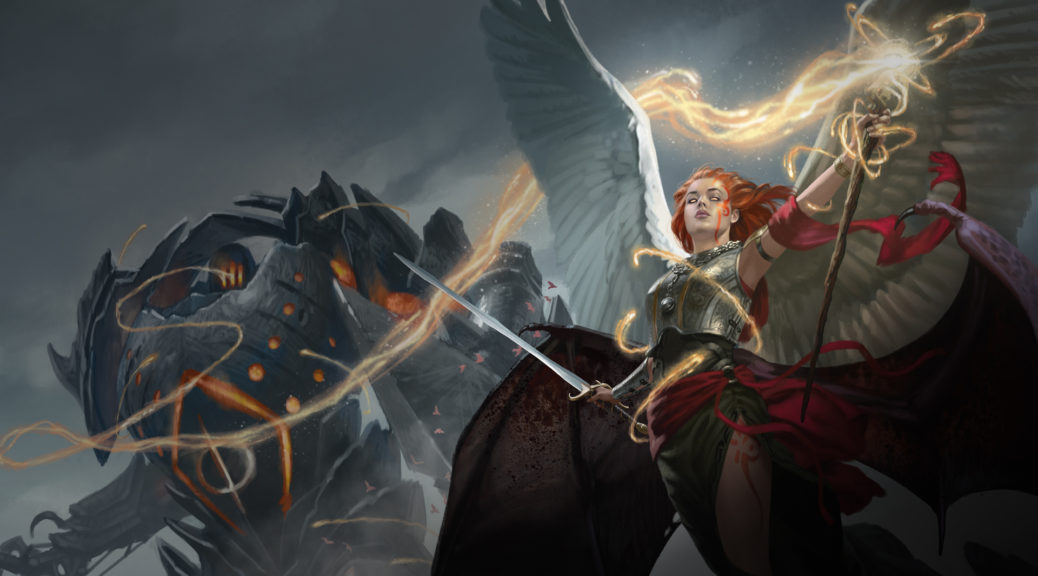 Here we go with part 2 of all the Box Toppers, and we know them all now! Very spicy list indeed.

Avacyn, Angel of Hope – $240 – This feels pretty high, even though this art is awesome plus some. Sorin killed Avacyn, so now she has this ghostly look to her. Very cool. She is in 13k decks online, but I’d expect this to settle down a bit, definitely under $200, possibly in the $150 range.

Stoneforge Mystic – $70 – This feels low, but this also has a lot of factors. Not every white deck wants the equipment theme, but Stoneforge and her best buddy Batterskull are Cube staples and Legacy stalwarts. I hope that this drops lower so that I can buy several, but my inclination is that this is about the right price.

Brainstorm – $50 – This definitely feels too low for a card that’s in 30% of all blue decks online, and is frequently a four-of in Legacy. If your Cube skips on fetches, then it skips this too, though. The art is up there on the ‘awesomely-weird-o-meter’ and while it’s a rare, not a mythic, I think this will inch upwards a little as people have to buy several.

Force of Will – $350 – Here we are, the big winner for prices. It’s a big price, too, and up there with the judge foil in terms of price. It’s not as common in Commander, only ten percent of blue decks registered one, but while I expect the price will fall slightly in the rush of stuff getting opened, I think it’ll settle right there at $300ish.

Fatal Push – $33 – This is going to nearly be the least expensive of the Toppers when all is said and done. It’s a wonderful removal spell in Modern, and sees some Legacy play. It is decent in Cube, though quickly outclassed, and sees very little Commander play. I think it’ll fall a buck or two farther, but $30 will be the floor here.

Since then, we had reprints in Theros and Iconic Masters, which have kept this price reasonable. This is very good, as it’s one of the backbone spells of Modern, and sees conversely less play in Commander. This price is about even with the Amonket Invocation, and that feels off. This will go upwards in price a little, but not break $130.

Toxic Deluge – (no price yet, previewed too recently) – With Eternal Masters foils at about $80-$90, and this being one of the ‘yes, absolutely, everything is dead’ spells in Commander, in 28k decks, I like this to be about $100 and stay there.

Blood Moon – $80 – Let’s have another graph, because Blood Moon is another example of a card that’s needed repeated reprints to stay accessible:

Yes, for the longest time, Blood Moon was a $50 Chronicles card, which is an amazing sentence if you lived through the amazingly large quantity printed at the time. It’s an iconic sideboard card, and something that decks have tried to cheat into play early with Simian Spirit Guide and other fun methods. The Invocation is $90, and while I like this art a lot more, there’s a greater quantity of this out there. It should stabilize in the $80-$100 range, but that might spike hard when we get back to Modern tournaments in person and the metagame calls for them.

Goblin Guide – $40 – If you’re gonna play it, you’ll play the set, but the metagame for burn has shifted to the one-mana Prowess creatures who can hit even harder than this. The right price.

Meddling Mage – $30 – This is a popular card in Humans decks where it’s legal, but still very niche and probably the cheapest foil Box Topper. I won’t be shocked to see this at $25. Remember that there’s $20 Expeditions out there.

Batterskull – $70 – This is mythic, so that helps. No one plays more than two copies of this, and a singleton is common enough. It’s in a tiny percentage of Commander decks, too, so I feel like this has a little farther to fall once we get past the initial rush.

Chrome Mox – $110 – The big problem here is the Invention version, which looks stunning. The new one evokes a digital feeling in me, but the art, while sweet, is the hangup. The EMA foil is $80, the Invention $160, and this is in the right range, smack between them.

Expedition Map – $25 – This has already fallen from the $40 it was at early on, and I think that’s an error. I find myself hoping that it falls farther, so that I can buy a lot of them. $20 for gorgeous art on a card that is a four-of in Tron builds and is in an additional 25k EDH decks online? Sign me up. It also helps that this is the only alternate frame available.

Lightning Greaves – $60 – I LOVE this art. I will respect if you think the Invention is more awesome, and that version is definitely rarer, but Greaves is so good that it’s only been in a booster twice: Mirrodin and Mystery Booster. It is a broken card, being in 30% of ALL DECKS on EDHREC, just about 120,000. There is a real demand for this card, and I expect it’ll go up by at least $20, and be close in price to the Invention.

Mana Crypt – $180 – So within a fairly short time, we got the EMA version, the Mystery Booster, and now this. We’d already had a judge foil and an Invention, and this is tempting. It’s a mythic, and it’s not like the market is saturated with the assorted promo versions. Players pick these up and they stay safely in decks. I expect this to dip at first, and then rise a little, into the $230-$250 range.

Mox Opal – $75 – This feels too low for this version. Is it that much worse than the Invention at $175 or so? Granted, the Invention is pure hotness and prettier than most anything, but this is also super sweet. It’s in 12k Commander decks online, but is banned in Modern. I feel like this will come up a little in price, but there might be a chance to buy in at $60 or even $50 when the first waves of VIP hit and that’s pure value.

Sword of Feast and Famine – $110 – This sees a lot more Commander play, given the untap trigger, and the Invention being about $70 more bears that out. I would expect this to dip a little but gain it back, being a mythic and in sufficient Cubes/Commander decks.

Sword of Fire and Ice – $110 – Honestly, this comes down to art preference. The card is very good in any deck that attacks, giving you a free Shock and a free card, but you get to pick what art you want. The Invention is about $130, the judge foil with the old border foiling about $15 more, but this new Box Topper art is pretty amazing too. About $100 sounds right here.

Wurmcoil Engine – $38 – It’s dropped a few bucks since being previewed early, and I can see why some are turned off by the ‘Predator-Face’ art. Regular versions are about $20, and foil Box Toppers feel like they should be a bit higher. It’s a mythic, so there won’t be too many copies out there.

Academy Ruins – $45 – It’s in 12,000 Commander decks online and is a Cube staple with Mindslaver, and this is the first alternate art/frame treatment. This feels low, to be honest. I’d expect to see this at more like $60 before too long.

Urza’s Mine/Power Plant/Tower – $35 each – These aren’t big in Commander or Cube, but Tron has been a tier deck in Modern for some time, and these are needed in playsets. Originals from Antiquities go for $7 or less, but we can’t rule out the collectors who are going to enjoy the panorama for all three and the Karn Liberated. These might fall a little farther but $30 should be the floor. The foils from 7th and 8th edition go for a whole lot, but that’s pure scarcity.