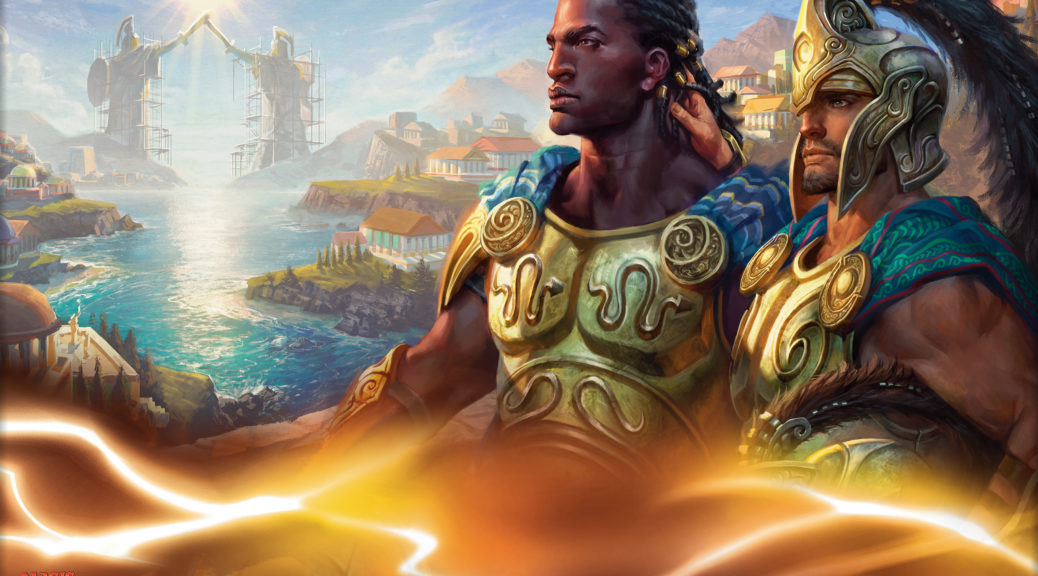 The price of Thrasios went up recently, coinciding with dozens of other expensive cards played in Competitive EDH going up and for months, everyone thought the two events were related. Now, months later, we see that Thrasios was bought because there are new Partners in Commander Legends, something no one could have predicted. This is a clear case of Insider Trading, Conflict of Interest, and some other words I heard watching 10 minutes of MSNBC.

Since the nefarious actors who perpetuated this crime didn’t leave any copies for the rest of us, we’re forced to make do with the copies that… have gone down in price since the spike? That’s weird. This buyout was fairly sloppy and it wasn’t very thorough. That’s good news for us, actually, because it gives us a chance to look at what kind of cards we should be taking a look at given there are more chances for them to be relevant moving forward.

We don’t know what the new partners will be but I think we can at least evaluate the old ones in terms of how likely they are to pair well with something new. The ones that are already good and expensive won’t matter because they’ll be made into goodstuff decks regardless. Here are the current partners with the most upside, imo.

Effects that are good broadly are going to be good choices for future gains. Ikra was printed in Commander Anthology volume 2 so there are more copies of this than some of the partners that weren’t. Ikra is good with any new partner that lets you pay life to do things, grows creatures when you gain life, makes creatures bigger, etc. The price went up a bit but there are still lots of copies available even though people had all day Sunday and Monday to buy them. I think this is a fair low-risk spec and copies should be easy to track down.

This is the lowest-risk, highest-possible reward one and has the lowest buy-in price. If you’re looking for a bit more risk and a bit more potential reward, I have one.

I like to talk about second spikes a lot. What I mean when I say that is a situation where a card’s price goes up precipitously, equilibrates then goes up again. The first time a card spikes, a limited amount of available copies at retail sell out quickly. Dealers raise their buylist prices to get the card back in stock, people find mispriced copies at the LGS and people who had been sitting on them fish them out of boxes and binders to sell or trade into the hype. This concentrates the loose copies in the hands of dealers. When the card spikes again, no one has the option of the cheap LGS copies, or pulling it out of a box and they have to pay retail. The price goes up harder and higher that second time without loose copies in the wild to attenuate the blow. If Kydele is relevant in the new context of a bunch of new partner commanders, it has demonstrated it can go to $15 and can do again. I think Kydele is underrated as all heck and my first deck with partners was Kydele and Thrasios which was so good and consistent I took it apart. Kydele makes a lot of mana, it’s in the 2 best colors in EDH and something is bound to come along that draws lots of cards. If you can get these under $10, seems like you do it.

The ship has largely sailed here. If you can get these on Card Market, do it. If you find them under $10, do it. Reyhan was in Breed Lethality, which was in Commander Anthology 2, so there are a few more copies out there just like with Ikra Shadiqi, but this got a lot of attention given how good it is with Sengir, Dark Baron which is, and I can’t stress this enough, a garbage, terrible card that introduced a new thing you have to do in EDH where you have to remember what everyone’s life totals are at the beginning of every turn in case someone dies. Because there isn’t enough to keep track of already, right? I think the partners revealed later will be better than Baron Sengir and it’s likely one or more will be a better pairing for Reyhan.

Speaking of “The ship has sailed, get these on MKM” Bruse Tarl has been underrated for years. Bruse is in the Breya deck, which is about as difficult to find sealed for a reasonable price as the Atraxa deck (Breed Lethality). If you’re not sure which cards came in which deck, don’t worry, here’s a handy refresher. Attacking with creatures is stupid and hard in Commander and I think people may have forgotten that. This certainly wraps things up with infect or a huge creature, but that was a thing before and no one cared because this was $6 for a whole year.

The rest of the partners are either bad or they’re too good on their own for them not to already be identified. The price of Vial Smasher came away down after its fake-out spike a few months back, but Vial Smasher doesn’t pair with anything. It could, I don’t know what the unrevealed partners are. That said, I tried to come up with some text that would make Vial Smasher part of a winning duo and couldn’t. I would focus on underrated ones like Ikra, maybe a good but high-upside one like Kydele and try to swipe some Brusers from MKM. That said, there’s one more kind of card that matters.

It’s so funny to witness in real time as Card Kingdom gets something right away and competitive sites where competitive players buy competitive cards lag far behind. CFB isn’t selling out of Bastion Protector at $8 and CK can’t keep them in stock at $13. Exploit the insularity of EDH players’ buying habits for profit.

Thanks for reading, everyone! Join me next week for more ideas about this wacky format, and hopefully a few more preview cards. We could talk about the Green spellbook and how nuts it is. Or I could build my Omnath deck a month early. There’s no wrong answer! Until next time!