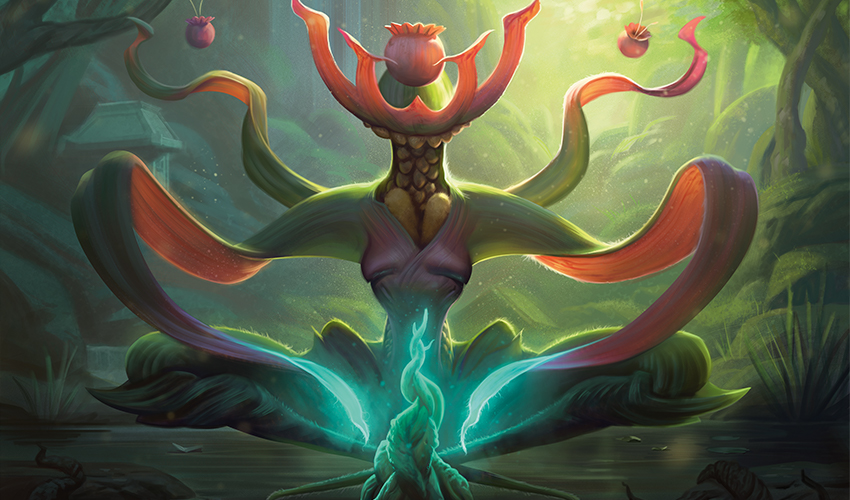 We’re pretty well set in Zendikar right now, and so far, we don’t have many updates about Commander: Legends.

What’s coming, though, is that in about eight weeks, you can buy Commander Collection: Green, an eight-card reprint set available in foil and nonfoil. We know the cards, we know the dates. We also know that the distribution model is surprisingly clear-cut, though actually getting the cards is going to be trickier than you think.

First, the basics. Eight cards, December 8, 2020. All WPN stores can get the regular version of this, and I found it pre-ordering online for $50 pretty easily. What you can’t easily find is a preorder for the foil version, only available at Premier-level WPN stores. As a point of reference, there are 48 of those stores in the continental US.

Just as an idea, if I saw the premium version on sale for $150 or less, I’d buy it. Two of these cards have never been in foil before, there’s new art on all of them, and the super-limited quantity is very attractive to collectors.

Let’s talk about these cards and where I expect prices to go.

Bane of Progress (nonfoils are $8) – There’s no foils of this, and it hasn’t been printed enough to bring the price down farther. It’s at that sweet spot where one printing every few years keeps the supply and demand balanced. The price has trended upwards, even given the loss of a dollar since the Collection was announced:

I’d expect this version of the card to start out at $8 and trend upwards. Preorders for the nonfoil generally bear that out, but this is one of the first-time foils. I can’t find anyone preselling individual foils, so my guess is that these start at $30, spike to $50+, and settle in at about $40. It’s entirely possible that I’m way off, though: There’s only going to be a few thousand foils in existence.

The foil version, that’s primed for a huge ticket. We’ve got the Judge foil for about $150, and the Commander’s Arsenal version for $90. Given that, I’d say $100 is a safe bet and maybe $200 is possible. The CA version is most likely the rarest, based on numbers and age, but the allure of this super-rare and newer version will have an effect too. Plus, people have shown that the CA foiling process is too close to the FTV process and is therefore less desired. The only thing stopping me from going further on that is that Commander Legends is going to have foil Extended Art versions of the Tower. That’s going to soak up some of the demand and some of the money.

Freyalise, Llanowar’s Fury ($13 foil, same for nonfoil) – So the original version in C14 was nonfoil, but the Commander Anthology gave us regular-size foil versions. We can compare apples to apples here, and I wouldn’t expect the prices to be high on this. Somewhere around $8-$10 for the nonfoil, and something reasonable like $20 or less for the nonfoil. I’m not expecting people to pay a huge bonus for something still in the same frame. The original isn’t a huge card in Commander but it is listed in 5000 decks online.

Omnath, Locus of Mana ($30 nonfoil, $45 FTV, $120 pack foil) – This price is reflective of a tiny supply: original Worldwake (January 2010), and FTV: Legends (August 2011). That’s nine years, and it was a mythic in the original! The Commander demand isn’t high enough for this price. I’m expecting a pretty severe correction here, and if you have spare Omnaths, I’d be a seller. It’s going to be hard for the nonfoil to hold a price of $20, as people buy their set and sell off what they aren’t using. The foil should be somewhere in the $60-$80 range, I think, even with new art and the appeal of being in this set, the demand just won’t be there.

Seedborn Muse (nonfoils $10-$17, foils $25-$200) – There’s a lot of outliers here because the original printing was waaaay back in Legions, that’s 2003 and older than a lot of current players. This is one of the iconic Commander cards, being in 29,000 decks and causing endless eyerolls. It’s also quite the rollercoaster when it comes to reprints, see if you can spot the reprint timing:

Each time it was printed, it recovered. Seedborn is a card that works in so many decks, I imagine a lot of copies that get opened don’t make it to the market. Price-wise, I expect the nonfoil to be around $7 but then climb upwards again until its next reprint. For the foils, we have a lower boundary of $25 from Battlebond and the $200 from Legions. I suspect the new foil will be above the 9th/10th edition prices, but not too high. Somewhere around $75 sounds right after the dust has settled.

Sol Ring (nonfoils about $2-$3, foils from $40-$500) – The nonfoil should land in the area of all the other nonfoil Commander printings, maybe a little higher. They are just everywhere! The foils, though, there’s some competition going on. The FTV is $45 or so, with the Magicfest version right there, but the only other foil versions are the Judge foil at $400+ and the Masterpiece at $500+.

I don’t think this is a $100 version, especially if we get an EA foil version in Commander Legends. Somewhere around $60 feels right for this.

Sylvan Library ($40 for nonfoils, $110 foils) – I’m not counting the Legends version yet, because it’s so old and so rare, it warps data. The Library is in a whopping 40k Commander decks online, about 1 in 5 decks that can run it do so. This $40 price makes you feel real good if you bought in during EMA:

A solid riser and a Commander staple, with foils from EMA and Commander’s Arsenal. I suspect this version will be the most expensive foil, both because not many are going to be printed and because lots of people who buy this set are going to slot the card into a deck. I’m hoping the Library falls in price back down to the $20 range, so I can make a ton off of it again.

Worldly Tutor ($30 for nonfoil) – This is no slouch in the Commander world, being in 26k decks, pretty impressive for a card that was only in Mirage and then an uncommon in 6th edition. The current price feels like it has room to drop, given that it puts the card on top of your deck instead of in your hand. Tutoring effects have gotten better, but there’s a lot of combo potential with Worldly Tutor.

I am pretty sure that the nonfoil will drop to $15, give or take, but the foils are another matter. I won’t be shocked if those crack $100 in the initial frenzy, and die down into the $80 range.