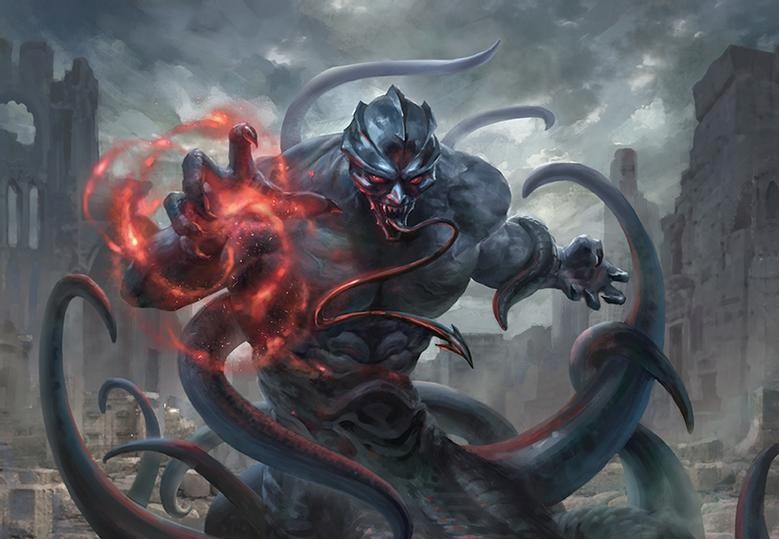 Previews are happening and I’m really excited. There’s going to be something for everyone, with trinkets for your favorite tribes, tools for beloved mechanics, and some flavor wins that are out of this world.

Oh, and a Lotus that’s preselling for more than $100. Please don’t buy Jeweled Lotus yet.

There are 22 mythics to be found in packs. You can get the foil-etched legends (both the new ones and reprints) in regular packs and collector boosters, but extended art (foil and nonfoil) will only be in the collector boosters.

I want to look at what’s new in this set first, and then when we know all the reprints, then I can focus on those. This being the first few days of a preview season, preorder prices are sketchy. If I find some I trust, I’ll mention them, but one of my evergreen pieces of advice is never preorder cards. A little patience saves you a lot of money.

Jeweled Lotus – This isn’t going to break Commander as a format. This isn’t as broken as you might think it is. Some decks really want to pump their general out early, but in a format with the wraths and removal like this, I don’t think you need to fall all over yourself to play it. If you have a three-color general, it better cost at least five mana, else you’re not getting full value from this. I’m not going to play this in The Ur-Dragon. Some commanders are awesome and aggressive, and much will depend on the deck. Does it help to think of this as a worse Dark Ritual? Ritual can help you out with other things, but this mana is exceedingly narrow. 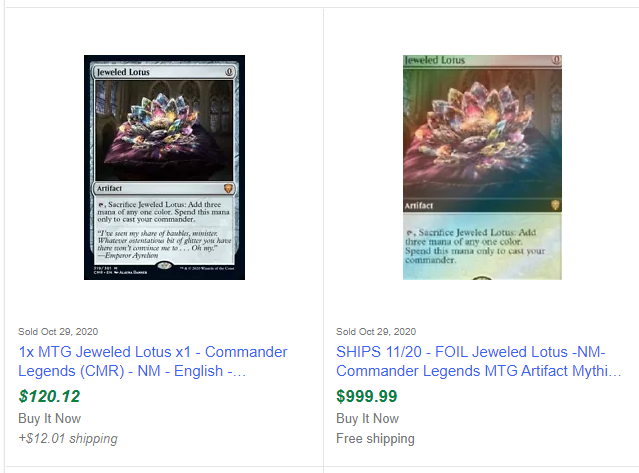 I’ve got to admit that I don’t think these listings are real. Someone is doing false listings on eBay for reasons that are unclear to me. Please be patient on this card.

Arcane Signet (EA and EA foil) – Finally, we’re getting the shiny treatment for a card that’s sorely needed it for a year. This is only available in the Collector Boosters, and will be one of the best hits. I expect the progression for the card to be something like $2.50 for the regular, $10 for the foil, $5 for the extended art, and $30+ for the EA foil. That’s a set of guesses, and it presumes that people will be more interested in a shiny version of the regular art than the nonfoil EA treatment. Right now, most foils are about as much as the regular version of a card, but I think that Signet is going to be one of the most in-demand foils for some time. It’s in 24% of all EDHREC decks online, for a card that didn’t debut until last year in Throne of Eldraine. It’s gotten reprints, thankfully, but it’ll get the foil treatment infrequently. Keep in mind that a lot of people who open EA or foil copies recreationally will just put copies into their decks, and not let them enter circulation at all.

As an additional warning, be aware that this is definitely not the last time we’re going to get this card in foil/EA foil. Other printings will definitely be coming. If you want them for your decks, that’s fine, but if you’re planning future gains, I don’t think that’s a very safe bet. It’ll be possible, with careful management of where you get these (Europe!) and how quickly you resell them. Command Tower is in a similar place, though there’s other foils of Command Tower out there already, the EA foil will have quite the premium until the next EA foil printing.

Jeska, Thrice Reborn – This is a miss for me, as it’s extremely niche. The zero ability requires you to have some creature in play that you can do significant damage with and gain advantage that way. I like the meme value of using Jeska with Brash Taunter and Blasphemous Act, for example, but there’s blessed few ways to gain consistent advantage. What’s really a bummer is that Jeska’s second ability doesn’t scale well. Three mana lets you ping three targets for one damage each. Five mana, and you’re dealing two to each. Seven mana to deal three damage to three different things is not great. Yes, it’s possible that you’re casting the partnered commander some, and if you’re pushing that angle hard you can get much better value, but that’s slow and a lot of work. Jeska is going to be a very cheap mythic, which is a shame for a character with so much lore. (The same character is Jeska, Warrior Adept, Phage the Untouchable, and Karona, False God.)

Tevesh Szat, Doom of Fools – Now this is a card to get people excited. There’s a lot to do with two free creatures to sacrifice, and the plus one to sac something and draw two is also strong…but the ultimate is what’s got people buzzing. This is exactly what people want to do in Commander, making huge swingy plays, and I fully expect some wonky combos based around cranking these counters ASAP. I appreciate that Doubling Season isn’t enough on its own, usually that’s a slam-dunk, but this is such a powerful ability that they needed to edit the cost even higher. I expect this to be somewhere around $10 for the base version. Right now you can get it for $20, which is much too high. The borderless treatment will have a premium, but nothing too outlandish.

Vampiric Tutor – What a time to reprint this card, and with an EA treatment:

Granted, this was a mythic two years ago, and that’s a good timeframe for most any card, but ouch. This is a gorgeous piece of art, and I wouldn’t be shocked if the EA foil was $200. It’s tough to see on this graph, but the price on TCG has fallen by $50 in the last week due to this being previewed. People who own Eternal Masters foils want to get what they can for the card before the new versions land.

What I’m really interested in doing is picking up a few copies at a cheap price. This was about $40 for a few months after its printing and climbed up above $120 before we got this preview. Let’s all learn a lesson here and buy it cheap around Valentine’s Day, shall we?