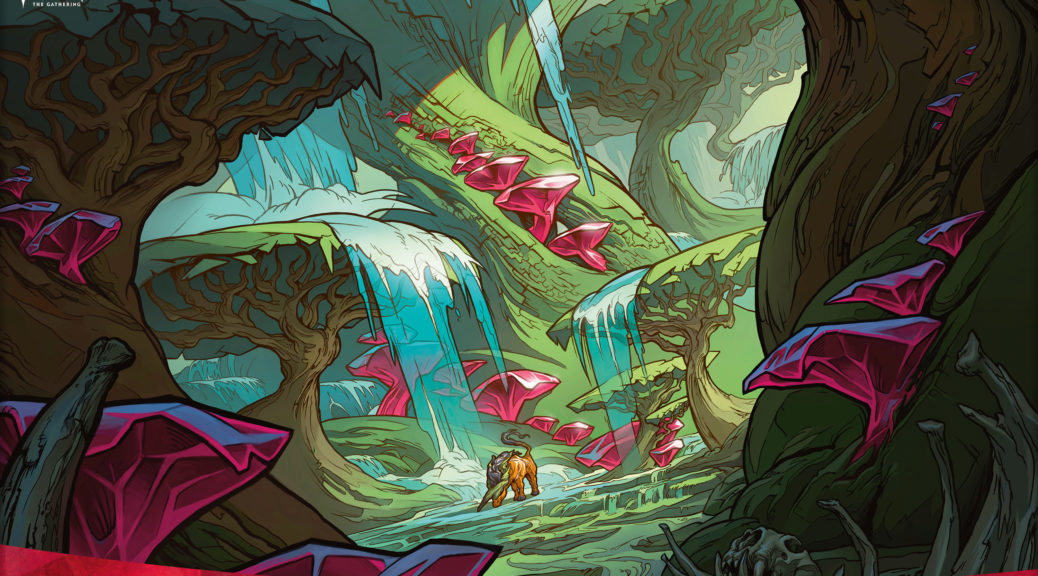 We don’t have any data but I need to save myself from election day doomscrolling on social media. It can be a bad day on Twitter or a silly day of trying to guess if people like the same stupid garbage in EDH that I do. I can’t stress enough that this is stuff I like and stuff I like isn’t always going to be popular with other people. Here is what I’d do with the new cards and what I’d need to do it.

All of the Krakr garbage (Krark-bage) was pretty obvious, but this is a Cheerios combo piece in the command zone. As Mtg Price’s resident breakfast cereal expert, I can tell you that Cheerios is a trash cereal only given to literal babies, but the deck is fun. Currently, Cheerios decks run 0-cost equipment and Puresteel Paladin, but there was a time in Magic history where Crimson Kobolds and Kobolds of Kher Keep were bounced with Cloudstone Curio with Glimpse of Nature until you get Grapeshot them to death. I don’t think you want to Grapeshot people in EDH, per se, however…

The Mystery Booster slowed the hype train, much like a wayward cow on the tracks might slow but not stop a runaway locomotive in a Denzel Washington movie when he was in his “Make movies about trains with Tony Scott” period.

Reservoir is down from its maximum but there is a lot of room to grow, especially if you can snag $5 copies from TCG Player and it’s already $8 on Card Kingdom. If it hits $14 on CK again, they’ll be offering $10 in credit and an easy double-up for barely any effort is pretty sweet. I think this card is a monster and it’s a great finisher for a stupid Cheerios deck. True, it’s a multiple card combo, but having one of those pieces in your command zone is a game-changer.

This card needs a reprint that isn’t just a more expensive masterpiece. I liked these at $35 before they hit $45 and dropped again. I think they can hit $50 or $55 if they don’t get a reprint, and it’s looking like they won’t. These are good in more than just the hypothetical Cheerios deck I bet no one builds but me and the price reflects that. There are so few copies in the hands of vendors, if I wanted to take $500 and just jack this price all up with a few well-placed buys then say “See, I called it” I could, but since I don’t have a YouTube channel I don’t see a point.

I have like 50 of these but I used them as tokens in my Prossh deck, so I am never coming off of them. I think there are a lot of lunatics like me, and with several cards like Kher Keep making tokens called “Kobolds of Kher Keep” these are attractive tokens as well as Magic cards in their own right. I’m a little surprised these stayed under $5 apiece, honestly.

Unfortunately, you only get 1 copy of each in a 99 card deck, but they’re not as important as the Curio, which is easy to tutor for in a red deck. You can also build the deck with any other color(s) you want because Rograkh has partner. The deck could be fun. I don’t know what else in the deck would be expensive, though. You could build a pretty competitive deck for under $50, which is appealing, even with $30 of that being tied up in Curio.

The fluctuations between $7 and $1 are the $7 copies selling out and our algorithm scraping the $1 the sites want for the oversized card. It’s funny. What’s not funny is how much Yidris is going to cost when everyone builds a new cascade deck and none of the 4 color commanders are reprinted in Commander Legends. I should have recommended this weeks ago but, I goofed.

This isn’t directly related to anything in CL, but it IS in Maelstrom Wanderer and also, I like this card and it’s getting more expensive on CK because it’s bonkers, but also it’s cheap on TCG Player. If this is $11 on CK and $5 on TCG Player, you can practically arbitrage them.

I say this a lot but not all of you read all of my articles, so I’ll spend a little ink on this before I wrap things up. Do cards that are $11 on Card Kingdom and $7 on TCG Player sell on Card Kingdom for $11? You bet. There are a lot of reasons for this, but just know that Card Kingdom is a very good indicator of the health of an EDH card’s price and EDH is carrying a lot of the weight of the paper market right now. I think something is underpriced on TCG rather than thinking it’s overpriced on CK, and for EDH-only cards like this, it may help you to think in those terms as well.

That’s all for this week. Next week we will have a full spoiler, some data, maybe a new POTUS and I’ll be chasing the Shandalar speedrun world record on Twitch. Frank Karsten is sitting in 5th place and I’d love to knock him off of the leaderboard. Until next time!