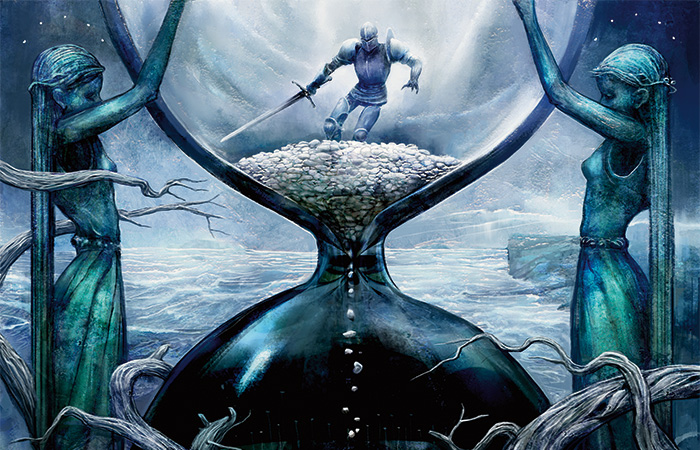 This week I want to address something that I get asked a whole lot: “Should I buy {card from the new set} now, or should I wait?”

This has a semi-complicated answer, and requires you to have done some thinking about the card first. My method is not foolproof, but will get you what you want in almost all cases. Let’s get into the specifics and the pitfalls.

To be clear, this is my process that I apply to newly released cards that are getting a lot of hype. This isn’t about reprinted cards (buy after three months) or Reserved List cards (if it didn’t spike already, it’s a buy) but only about new, in pack cards. This does apply to reprint sets like Double Masters, as well as combination sets like Commander Legends.

The first thing I need you to think about is why you’re buying the cards. Are you going to put it in your cube/Commander/Standard/whatever format deck immediately, or are you buying speculative copies?

If it’s for personal use, I suggest you get your copies within the first two or three weeks. Let the frenzy die down, but wait until people have had the chance to open their personal boxes, the stuff they preordered but couldn’t ship until the official opening day. That time frame is about right for the new things to fall from the preorder prices, but short enough before scarcity starts to pump prices up.

Let’s look at an example from the recent past: Jeweled Lotus in Foil Extended Art.

We had a couple of weeks in there where the price crept down under $400, despite crazy preorders. The immediate frenzy had a chance to die down, and keep in mind that this was one of the rarest cards in packs, needing approximately 400 Collector Boosters to come up with one copy. The second that prices started to go up, and the FOMO kicked in, it went up several hundred more, and frankly, it’s going to keep creeping upward with every copy sold.

Now, this philosophy only applies to the cards that are the most sought after, which isn’t always the rarest version of a card. The other FEA mythics from Commander Legends are exactly as common as the FEA Lotus, but demand plus cachet mean that Soulfire Eruption is $7 as an FEA, when the Jeweled Lotus is $750+.

The card I’m thinking of right now is the foil Phyrexian Vorinclex, Monstrous Raider. Preordering for $400+, it’s dipped under $200 on TCG and there’s a lot under $250.

If you want one for a deck (and you know you do, it’s even better than Doubling Season when it comes to planeswalkers) then I strongly advocate that you do so now. The price is right and I totally sympathize with the desire to get the card right now and put it into the deck (or decks) that want it badly. I think you should go ahead and snap up the Phyrexian foil now, or in the next 1-2 weeks, before the price shoots back up. Too many cards are spiking too hard, and this is the hot card of the moment. Please don’t clever yourself out of what you want.

When picking up cards for speculative purposes, though, I don’t like to acquire the big cards for hopes of gains in the same timeframe. I advocate more patience. The greatest supply on a card is almost always 2-4 months after release, when the next big set comes out. The rest of Commander Legends is in this phase, and there are some excellent deals to be had if you’ve been patient. Yes, a couple of cards spiked back up, like FEA Apex Devastator, but for the most part, prices have dropped back down.

Now, there are potential issues with my plan. In some cases, when you buy your personal copy before the first month is over, it’ll fall farther. This happened to me with the FEA version of Hellkite Courser, an amazing addition to my The Ur-Dragon deck.

I bought a copy the first week for about $35. I should have been more patient, and saved myself $10. It’s come up a little in price from that low point, because FEA mythics were never really in huge supply from this set, but my eagerness cost me a little cash. Not a ruinous amount, but it stings. This is a risk I’m taking on because I just don’t want to wait. I want to have the new cool card in my deck RIGHT NOW!

Just as moving too soon can be a bad thing and cause me to overpay early, moving too late can mean I pay more as well. This is harder to evaluate ahead of time, but it tends to track with how playable a card is in the format it’s aimed at.

The example here would be Jeska’s Will:

If I’d moved in on the two-week plan, instead of expecting this to hit the lowest point at three months, then I could have made a lot of money in a very short period of time. Many people did, and have made their money, but this is the risk I take in moving too slowly.

One more thing about the distinction between personal copies and spec copies: We don’t tend to worry too much about the cost of the sweet card we put into a Commander deck, at least as it comes to new cards. Is it the version we wanted? Okay, great, get in there and let’s do some work. Commander is the intersection of collecting and playing, with the delicious topping of being able to show off the collection while playing.

When it comes to your personal copies, I’m a strong advocate of getting what you want right away. Don’t mess around trying to save a couple of dollars. Go get what you want, and then enjoy the feeling of that acquisition. You’re gaining value left and right with all the help from our site and our Discord, you deserve to get that sweet card.