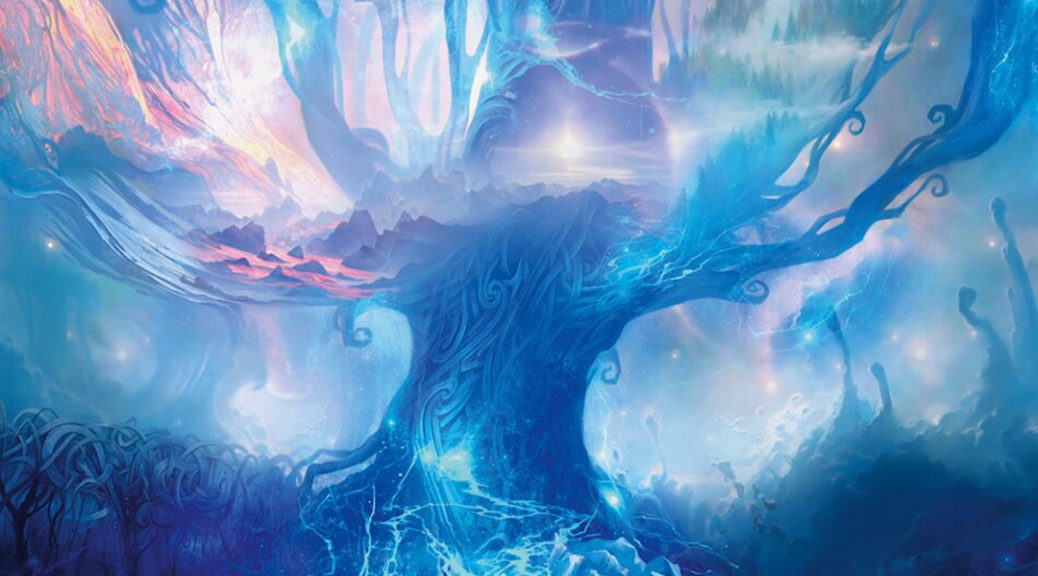 Jason did a great article last week on Esika, God of the Tree and some of the best cards that slot into that deck, and it got me taking a look at some other five colour commanders, decks and what kind of cards they like to play. Five colour decks are far from the most popular things to build, but that doesn’t mean that they’re not full of excellent spec targets. Some of the best cards from them are played in the majority of five colour archetypes, and lots will also see play in other decks as well, meaning that despite the relative unpopularity of these decks compared to, say, Simic decks, we can still find some good targets from them.

Although technically not necessarily solely a five colour card, Cascading Cataracts is a perfect utility land for decks trying to produce WUBRG mana or some other wild combination to cast Ultimatums and the like, filtering any number of colours (or colourless) mana into the colour(s) you need. On top of that it’s also indestructible, which is a huge boon at the EDH table when there are Wastelands and Strip Mines running interference in the game. Being taken off one or more of your colours can be a quick path to losing a game of EDH, especially when you’re playing a deck with very stringent mana requirements, and so having something like this in your arsenal can help things out a lot.

Cascading Cataracts has only ever had the single printing in Amonkhet back in 2017, almost four years ago now. It’s the kind of card you’d expect to see reprinted in Commander decks, but we haven’t had it yet and even if (when?) we do, it probably won’t be in foil. This is a card in 11,000 EDH decks on EDHREC and foils are starting to run very thin on the ground. There are only 21 listings left on TCGPlayer with just a few below $10, but I don’t think that those will stick around too much longer. With more five colour cards like Esika coming out in each new set, people will want their foil copies of Cataracts for new and old decks alike, and give it 6-12 months I think that these will be well above $20.

Bloom Tender used to be the only card that had this effect on it, and as such got pretty damn expensive (~$60) before we saw it reprinted in Mystery Booster, with Eventide foils still commanding wild prices over $400. With Throne of Eldraine, Faeburrow Elder gave us a much more accessible avenue to this ability, and as such it’s gained enough popularity to be neck and neck with Bloom Tender in terms of EDHREC numbers, with both cards listed in almost 15k decks.

Even in just a green & white deck Faeburrow Elder is a reasonable card, a 2/2 tapping for two mana, but the more colours you add the better it gets. In five colour decks its ceiling is a three mana 5/5 that makes WUBRG mana for you, which is a super powerful effect that is going to get you going places pretty quickly.

There are a couple of copies of Faeburrow Elder left at $30 on TCGPlayer and a handful below $40, but with a total of 22 listings and no FEA reprint on the horizon, these won’t stay below $40 for much longer. You can still grab some around €25 on MKM but supply isn’t very deep there either, which shows how popular this EDH-only card is, despite Europe’s relative dearth of EDH play.

This card actually surprised me a little, and it just shows that we all misevaluate cards more often than we think. When Chromatic Orrery was previewed for M21, I honestly didn’t think too much of it, mostly because of its seven mana casting cost. Yes, it does give you five mana back right away, but that’s still a big investment that could easily produce very little value if it’s countered or removed right away.

However, around 5000 people seem to disagree with me – and more power to them. This has turned out to be a very popular card in five colour decks, amongst others, and as well as being a big colour-fixing mana rock, it can draw you a bunch of cards too. We’ve already seen Mythic FEAs from M21 like Fiery Emancipation and Terror of the Peaks popping off, and although Chromatic Orrery FEA has stayed pretty high since M21’s release, I think that it’s pretty clear that this will be the next card to go.

There are a grand total of seven NM foils on TCGPlayer, starting at $35 and ramping up quickly. If you have access to the European market then there are still a few under €25 but again, supply is not very deep. If you want any personal or spec copies then snap them up quickly, because I think that these will be over $50 very quickly.