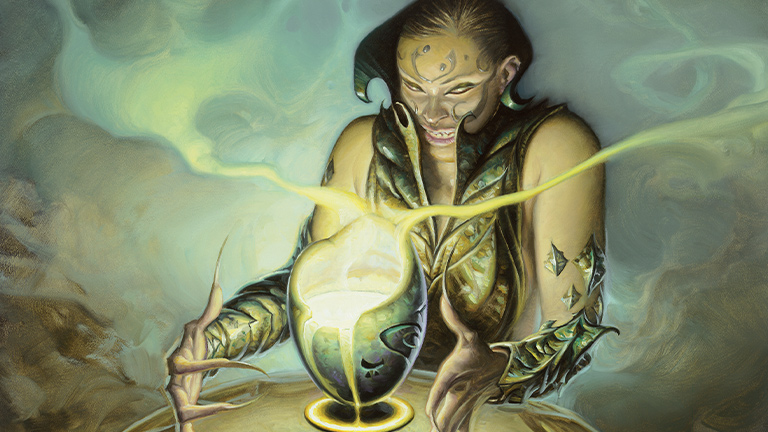 Time Spiral Remastered arrives in two weeks, officially. We’ve got most of the set revealed, including the Timeshifted sheet, which is new cards put into old borders. Because TSR is a limited-run set, especially with Strixhaven coming out on April 23rd, TSR and especially the Timeshifted sheet, offers a very unique opportunity for gaining value. Let’s talk about what to get , how many there will be, and when to get it!

Let’s start with the regular set. There are no Collector Boosters or special frames (aside from the Timeshifted sheet) so there’s just regular and foil for the set itself. According to Ben Bleiweiss over at SCG, foil rares in Standard now drop about one in 18 packs, and foil mythics in one in 144 packs, roughly. This tracks with the ratio we’ve been given of foils appearing in Standard sets and the regular packs.

A Wizards source on the WPN Facebook groups has confirmed the foil rate for the foil timeshifted sheet: once every 27 packs, roughly. That is a real ‘holy meatballs’ level of scarcity, especially because the timeshifted sheet is just 121 cards appearing at the same frequency relative to each other. With 36 packs per box, you’re looking at four boxes to collect a set of nonfoil timeshifted cards, though in execution that probably won’t happen. Statistics is like that, sadly.

There aren’t a lot of cards in the regular set that you should be too worried about, though. This is all reprints, nothing new. Granted, most of these cards haven’t been printed since the original Time Spiral block in 2007-2008, but the price is generally due to the low supply, not a super-high demand.

Time Spiral Remastered is a limited-run product. They aren’t planning on doing a huge print run, this is just to goose the market with some reprints. I’m confident this will be a fun set to draft, but holy smokes, the foils on the Timeshifted sheet are going to carry some very high premiums.

Let’s have a table, summarizing what we know, before we talk about our plans for these cards.

For comparison: Foil Phyrexian Vorinclex is about every 296 packs, and FEA Jeweled Lotus was every 400 packs. Foil Timeshifted Thoughtseize will be roughly 8 times rarer than FEA Jeweled Lotus. I grant you that Vorinclex and Lotus were in Collector Boosters, but stores were willing to presell those cards based on allocations.

We have a very narrow window with the Timeshifted cards, in foil and not. It’s more than the four weeks between TSR’s release and Strixhaven’s release. Previews for the Standard set will begin just a couple of weeks after Time Spiral Remastered, draining attention and preorder money.

Luckily, we have a very recent example of shorter-run sets with special cards and the timeframe involved: Commander Legends.

I broke down the timeframe for Jeweled Lotus and I also looked at Phyrexian Vorinclex, because the last six months of YOLO and FOMO have lead to a pretty clear pattern: Don’t buy in the first two weeks, but the time to buy is when regular folks have gotten their boxes, and begin cracking and dumping.  You have to give the preorder people a chance to sate their ravenous, drooling, immediate needs but you have to be cognizant of the small supply involved with these cards.

In this case, with the Timeshifted sheet, we’re looking at some ridiculously rare foils. Preorders are notably rare with the big vendors, because they aren’t sure how many of each they will end up with. They are playing it conservative, which I respect as a business decision (refunding the most rabid customers instead of giving them what they paid so early for) and an indicator of their product allocation (holy crap they really aren’t getting much!).

We’ve got most of the cards on the list of 121 (four more to come out today) and I just can’t advocate for price predictions on the foils. Quantities this small are not something we’ve dealt with before, and the collectors have come out in force for Magic lately. I suspect that even the less-popular ones, like Temur Battle Rage, will have surprisingly high foil prices.

While it’s true that the old border is not everyone’s favorite, the players who get hit with nostalgia are also going to be the older, more enfranchised players, who are also the ones that tend to have more disposable income. I’m not expecting these cards to go down over time, not one bit.

So what do I think you should do? Wait one to two weeks, and then put down the money needed to get the foil Timeshifted cards you want for personal use, for your collections, and for later growth. Those are clearly going to be the chase cards, and with there being 1.3 Timeshifted foils per box, with 121 cards all having an equal chance to be that foil, it’s going to take a whole lot to get the copies people want.

The real growth opportunity may well be in the nonfoil Timeshifted cards. With so much product getting opened in search of the high-dollar foils, there will be opportunities to pick up the other cards in nonfoil. Tournament staples like Dismember should be good picks, because not every tournament player has an all-foil deck and like nonfoil Extended Art cards, this may be the way to add uniqueness to the competitive decks. Those in-person tournaments will eventually be held again.

The number of Commander staples on this sheet also represent opportunity. Sure, those players generally want the foils, but as we’ve seen with foil EA Jeweled Lotus and other such chase cards, the nonfoils won’t maintain too much of a gap. Solemn Simulacrum is my favorite pick here, but Panharmonicon is also really pulling at my interest. Sorting this sheet by EDHREC ranking will help you concentrate on the higher-demand cards, and help you decide where to put your money.