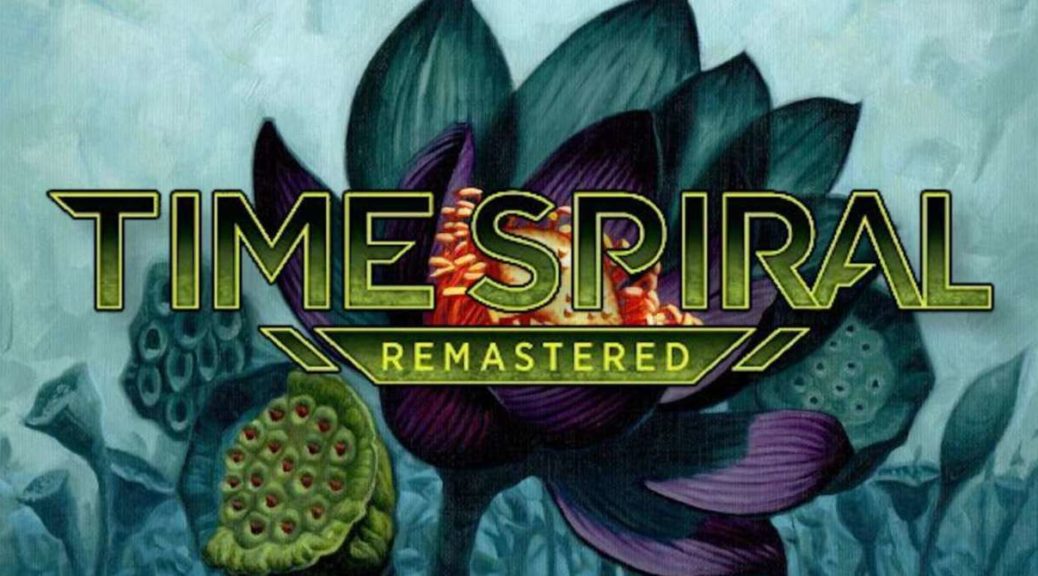 I know you don’t love baseless speculation and last week I speculated on a baseless basis based on – yeah, I’m done with this bit. If you didn’t like last week’s article, this is the opposite of last week’s in a way that you will like. If you did like last week’s article, this week’s article is the opposite of last week’s in a way you will probably still like. I’m going to make everyone happy except the people who liked that bit I was doing where I said different variations of “base” which I then abandoned midway through a sentence, but to those people I say, it’s better to have loved a weird comedic bit I was doing and lost than to have never loved one of my weird bits at all. For more base-based bits, google “Zero Wing meme” and relive the late 90s.

We have a set coming out called “Time Spiral: Remastered” which sounds and looks like a Masters set but which they swear isn’t a Masters set. It’s not a limited print run but it has some of the hallmarks of a Masters set. Splitting hairs matters very little – we are getting some meaningful reprints and some of the cards will be in a new border for the first time ever which is very exciting. So obviously, cards played in “Prestige” formats like Legacy and Vintage where people will spend real money to make the deck look as good as possible, are going to be in play. I don’t need to tell you that day 1 of the set being opened, foil old border Ponder will be money. However, some of the stuff will tank and its recovery depends very much on how much it’s played in EDH and how it’s used. I want to take a look at a few cards I think we should buy at their peak because they’re bound to rebound nicely.

When Iconic Masters came out, we identified a ton of cards that were bound to rebound very nicely and a lot of those predictions were borne out. In particular, strong EDH cards that, despite not being mythic, also didn’t have a ton of supply, really shrugged Iconic Masters off.

Look at Austere Command recover from that printing. It didn’t just recover, it crested above where it was before the reprinting. These sets can’t give us copies as fast as the format is growing and while the format can’t continue to grow unbound, we’re still seeing opportunities. I didn’t tell you about Austere Command at $10 on the way back up telling you it could hit $15 either, like I sometimes do (you still make money, sheesh), I told you about it when it was $10 on the way down, reminding you to get in at $7 or $8. Predicting what will recover and what won’t is a simple matter of looking at how and how much it’s used and EDHREC gives us all of the data we need. Why not take a look at Time Spiral Remastered through that lens? Here are some cards I think will recover.

While we used to call Eternal Witness the poster child for shrugging reprints off, too many printings has caused the price to lag from around $7 where it normally equilibrated to about $4. That said, the new art on the old border is going to be pretty popular and I think when that printing specifically bottoms out, you should consider buying. There aren’t many cards in the list of timeshifted cards that see more play than Eternal Witness – Farseek is the only one.

We might not see Eternal Witness’s Fifth Dawn printing recover, but the new one should be different enough that it will have its own price trajectory and I see it being a real gainer. Compare it to the FNM foil which is currently $50ish.

The new Solemn Simulacrum is novel enough that I think we can ignore the old price graphs. Despite Wizards attempting to keep this at like $2 by coming up with a ton of unique ways to reprint paranoid android four times a year, there is only one Jens art and seeing it with a brown border is going to make a segment of the population snap it up.

1 in every 5 EDH decks runs this card, and even if there is one in every box of Time Spiral Remastered, there will be a lot of demand, both from new decks and old ones. This has the potential to be a real money cards despite literal $1 copies of this card existing.

It’s not just the Time Shifted cards I like, however – the regular set has a ton of great reprints and I think the EDHy ones have some real upside once they bottom out.

I also think Beast Whisperer could see some upside with the new border given how much play it sees in EDH.

EDHREC is nice enough to rank all of the commanders for us to show us which ones get played the most, so take a look at that for sure.

Just click the link I provided to be taken to the site to peruse the whole list. I think maybe the new borders on some of the commanders will matter, but in general, I don’t look at commanders, I look at decks. Let’s scroll down a bit more where the cards in the set are ranked by percentage inclusion which is very helpful.

You can peruse the entire list yourself, but I think it’s worth diving into the greatest hits and talking about some cards that matter to me.

Looking at the rest of the set, it’s pretty clear that there isn’t much in Time Spiral Remastered that doesn’t have a new border that matters much in EDH or price-wise. Krosan Grip isn’t getting a new border but it’s a $2 card with six printings already. Aven Mindcenser is like a buck. Return to Dust is bulk. Damnation may be the first card worth looking at and when you sort by percent inclusion, Damnation is ranked 30th. Still, let’s take a look.

Despite being literally given away to people for playing FNM at one point, Damnation climbed to peak near $75 and stayed there until 2017 when Modern Masters kicked its feet out from under it. Despite hitting a low of $25, it rallied back to $50 where it’s mostly stayed. Damnation could get a lot cheaper but I expect it to rally back up to at least $40, maybe $50 again, meaning you could get in for easily half or less if you wait for prices to bottom out. Damnation barely needs help from other formats, but it will get that help regardless, making Damnation this set’s Austere Command. Expect a full price recovery and buy accordingly – Damnation seems like a sure bet, and the fact that it’s not in the top 20 cards in the set ranked by % inclusion doesn’t matter as much as you might think. It’s still in almost 24,000 decks and sees play in other formats. I’d have liked to see a classic border around this, but I’ll pay basically retail on these when they crater.

Look, I know I’m embarrassing both of us by putting this graph up here but we both know I basically have to. Don’t forget Sliver Legion will go up in price, basically no matter what you pay for it out of TSR boxes. You will make money here. I don’t know how much or over what time period, but it’s $50 pre-sale on Card Kingdom. I have to imagine this will be worth more than $50 in a year, two tops.

Saffi’s EDH inclusion is very modest, but if it gets any help from other formats, this could be a bulk rare that ends up worth a couple of bucks in a few years. Don’t bulk these out – the new art alone gives it a fighting chance.

All in all, I think the money is going to be made by Damnation and timeshifted staples versus anything else, so it’s worth it to buy expensive booster packs of the set imo.

This is a weird set – the most played cards are pretty cheap uncommons with lots of reprintings that could be very valuable with the time shifted border and the cards from Time Spiral proper aren’t really that interesting in EDH. That said, there are some very interesting cards here, and I recommend going to the TSR page on EDHREC to see how things are ranked and make your own conclusions. I have my opinions, but it’s your money and you should feel good about where you park it. That does it for me this week – thanks for reading. Until next time!