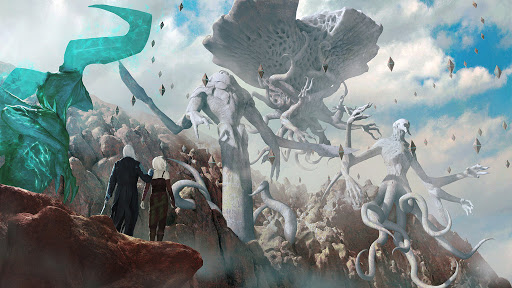 We haven’t had a MagicFest/Grand Prix event since Lyon in early March of 2020. Paper Magic is starting to reopen in some places, with different levels of precautions in place depending on local governments. There are places in the world that didn’t need to shut down local stores for long, and paper didn’t really dwindle there.

For most of the world, though, paper games are a relic of the before-time, and hopefully will be a thing that comes back soon. Commander players are making do on Spelltable, and Magic Online plus Magic Arena scratches the itch for most Constructed or Limited players.

However, as long-term thinkers, we have to consider what is going to happen when paper play returns. What formats should we be focused on? What staples can we get now? What versions carry the best prospects?

To be clear, I don’t have any inside information about when paper events will start again. Conventions are starting to make plans, the World Series of Poker is planning on events in November, and it looks like (oh please) schools will be approaching a new normal when the fall comes around.

When it comes to paper events starting again, I don’t think Commander is going to have as huge an impact as Constructed formats. Commander has been driving prices for more than a year now, and when combined with the collectors that have been targeting older cards, you get the recent increases that we’ve seen. People have been buying new cards and getting the rarest versions of cards for their Commander decks for some time, so I’m not expecting local stores reopening to bump those prices significantly. Likewise with GP-level events: the Command Zone probably won’t be a huge price driver either.

So what I’m thinking about more are the constructed formats: Standard, Pioneer, Modern, and Legacy. Standard is on the cusp of rotation, but if I’m thinking that paper events start again in the fall, or perhaps even this summer, where do I want to be? At rotation, we’re losing Throne of Eldraine, Ikoria, Theros: Beyond Death and Core 2021. That’s a whole lot of cards we don’t want to pick up if we’re Standard-focused.

We don’t know all of Strixhaven yet, but we know that the Triomes will be leaving Standard, along with Fabled Passage. So as a starter, if I’m predicting Standard’s return, I want to be picking up the ten Pathways right now, as they are the only game in town for mana fixing. It won’t stay that way, but they are likely to be good enough to see play, and jumping from $3-$4 to $8-$9 seems reasonable. I wish I could have a better sense of which Pathways to focus on, but there’s too much unknown information with the sets still to come.

Faceless Haven and Crawling Barrens are the only creature-lands that are legal in Standard, until some new ones come along. Faceless is at $1.50 and Barrens is only fifty cents, and both would be buylist plays if purchases in large amounts. Right now there isn’t a big demand for either, but that has the potential to change, especially once the Castles rotate as utility lands. The Temples are not a spec target for me, because of the additional supply from the original Theros block.

Remember that Pioneer was announced as a format in October of 2019, and in-person play ended about five months later. The format barely had a chance to get set up! During those five months, everything was all about Pioneer from a finance perspective, and when paper events start again, I think that’s one of the main places we should be looking. Modern is a more expensive format, but those who love it, really love it. Same with Legacy, only for an even smaller group of players.

With all three of those formats, it’s MTGO or bust right now, and luckily, we’ve got good metagame data and all three are nonrotating formats.

With Pioneer, there’s one card I’m really staring at, because it started to spike hard when Pioneer was getting started, but it’s fallen back down significantly: Sylvan Caryatid.

It’s only in ten percent of decks, but it’s the full playset when it shows up. No one dares shave on one of the best mana accelerators ever. A wide range of decks want to play this, and while Llanowar Elves and Elvish Mystic are also in a lot of decks, there’s a lot of those cards out there. (Yes, Mystic is on the Remastered sheet, and I’ll get to that category in a moment.) There has not yet been a meaningful reprint of the Caryatid, and as a rare plus being the buy-a-box promo, supply is constrained. Right now on TCG there’s a lot of copies in the $5 range, and that feels like an easy double-up when events happen in person again.

I’m also very big on one of the more utility creatures in the format: Bonecrusher Giant. Here, though, I am going to call attention to one of the side plots present in the current Magic pantheon: Is Constructed Magic the target audience for non-foil special frame, Showcase, Extended Art, or any other variant? It feels like the answer is yes: Tournament decks cannot play just a few foil cards for fear of being called out for Marked Cards. We now have a way to have a special version of a card without that version being noticeably warped. So if you’re going to spec on Bonecrusher Giant (good creature plus a removal spell) or Fae of Wishes (only wishboard enabler in the format) or Fabled Passage (only fetchland in the format) I’d advocate going in on the nonfoil special frame.

This includes things like the Time Spiral Remastered Old Border sheet for Elvish Mystic, or Thoughtseize, the second-most-played spell in the format right now. Getting the OB versions for $40ish is very appealing. Keep in mind that there’s other versions under $20 still, both Double Masters and Iconic Masters…but they don’t look as cool. Those versions might well be underpriced when paper launches again, for that matter.

This is not intended to be a comprehensive list of everything that could blow up when paper events start, but a framework for what it would take for that to happen. Do you have some other ideas, some favorite cards? Let me know in the comments, on Twitter, or speak up in the ProTrader Discord!