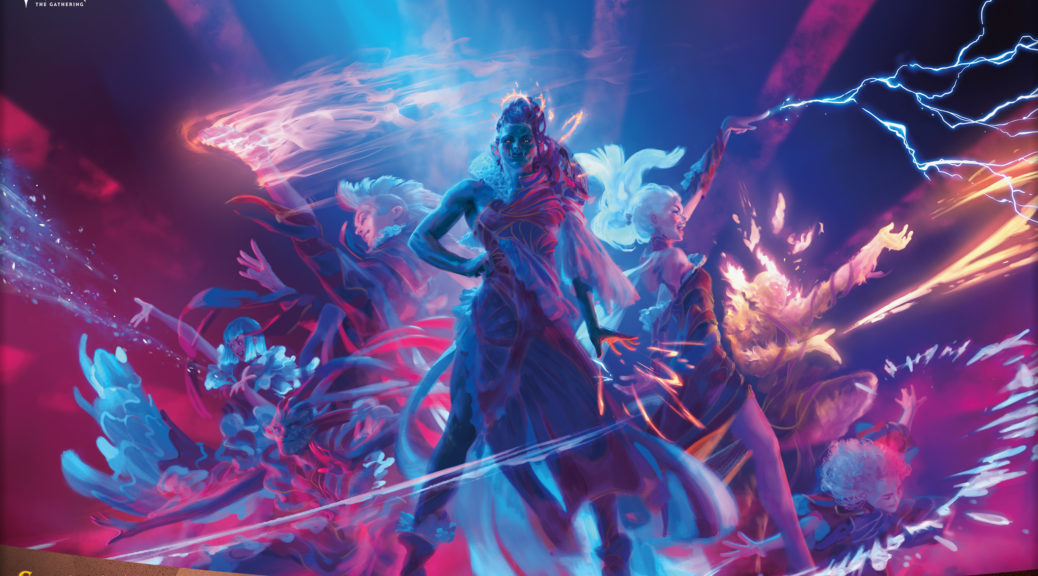 There are 2 new preconstructed decks revealed so far and I want to talk about both of them. If there are actually 5, you could get access to this article on Tuesday by becoming a Pro Trader, just saying. Early access to the articles is just one of the many benefits. I mean, this isn’t even me trying to pitch Pro Trader, this is just me uncomfortable that I only have 2 decks to talk about and you have information that I don’t about what’s in the other 3. I’ll talk about the rest of them next week – Tuesday if you found this paragraph charming, Thursday if you didn’t.

Lorehold and Prismari are revealed so far and I think despite RW usually being a pretty weak pairing, things seem different with this set. They used old, familiar color pairings but really did work to put a new twist on them – Lorehold is NOT Boros. This isn’t a combat-oriented precon, it’s leaning a bit into White’s “Archaeology” theme that hasn’t been explored much since like, Antiquities, and giving us some real value out of the graveyard in ways Boros never dreamed of. The precon also contains a very, very good reprint.

I don’t want to suck up to WotC too much (here; I ABSOLUTELY sucked up to them on Twitter and I’ll do it again) but this is a great reprint. What I won’t tweet is that they don’t deserve a ton of credit here because this was closer to $10 than $30 when they put the precon together to send off to the printer. It worked out for us, like it worked out in 2016 the first time this card was reprinted and sunk to below $5.

This won’t sink to $5 ever again and won’t ascend to $30, most likely, but there is still money to be made when this bottoms out. This should regain some value because it’s a bonkers card and it’s a Dargon and it steals ALL of their artifacts. Good God, this card is really good. Wherever this stops, buy it, it will go back up. This graph basically starts where it was reprinted and look at that curve.

There are some really solid reprints here beside Hellkite Tyrant, but I’m not sure too many of them have a chance to get back to their pre-reprint levels the way Tyrant will. There is one card I like, though.

This was also pretty reasonable when it was slated for the reprint but with the Elves shenanigans happening lately, this popped off in a big way. I think it’s likely this at least approaches the $20 it hit in 2019. This Lorehold deck could be the RW deck from Commander 2015 – it didn’t sell well but it was the surprise value winner a year later with Urza’s Incubator, Fiery Confluence, Blade of Selves and Gisela. We have seen $40 precon decks with one $50 card in them just this last year and it should be affordable to buy these decks and get your value back in basically 2 cards and have the rest of the deck be pure profit.

The new cards in the deck matter, too.

Tax is likely going to be a second Smothering Tithe rather than a new Smothering Tithe. With the other cards in the deck, it seems fairly likely that Monologue Tax’s price will be under $10.

Although it seems some people are eager not to make the same mistake they did when they underestimated Smothering Tithe. Where will Monologue Tax go if it’s half as good as Tithe?

And that’s with a reprint in the Brawl decks. Monologue Tax is no Smothering Tithe, but it’s close-ish and I think it’s not unreasonable to expect it in the $12-$15 range, but I bet it goes down before it goes up unless you find a presale price that’s cheaper than the ones that exist now. Be patient, let the feeding frenzy come and go and let everyone else test this in their decks.

The Prismari deck doesn’t have quite the same amount of bonkers reprint value, but it’s still pretty solid. OK, that’s misleading. This deck has like 0 value. Want to know the most expensive cards in the deck right now?

It could mean that the deck is bad and is always bad, but there is hope nestled among the new cards.

Everything in the deck costs a million mana, which is fine with Rousing Refrain being cast for free every once in a while. The real monster is the commander, though.

Preliminarily, take a look at Thousand-Year Storm which dodged a reprint in this deck, which is silly considering there are 2 $20+ cards in the Lorehold deck. I did get my Swarm Intelligence stonks spanked, though, but I deserve that, I guess. When the full deck is on EDHREC, I’ll have some cards to look at, but I have a few ideas based on looking around the net to see what people are building.

This is already on its way to the moon, or at least near-earth orbit with the parts of space shuttles and junked Soviet satellites. That’s pretty good, right? Buying in at $10 feels weird, but there are $8 or $9 copies available and I think this is $20 in a year barring intervention.

I bet you didn’t know this was going for this much. This is a beefier version of Young Pyromancer and EDH players are very aware of it even if some of the rest of us weren’t. This is on its way up and double triggering this seems cool.

Finally, a card that I need to show TCG Prices for because the graph on Card Kingdom is messed up.

This looks like a useless graph, but it’s actually not. Let me explain what is happening here. Mizzix was an $8 card that appeared to be going for $1 every few months. What happened there? Put simply, Card Kingdom doesn’t do a good job with their API that other sites scrape. When there are no copies of Mizzix listed, it doesn’t list the price it was going for when it sold out like it does for other cards because there is a $1 copy of the foil oversized card from the EDH decks in stock. We can see every time Mizzix sold out on Card Kingdom in the last few years. It happens quite a bit. That’s something worth knowing. This was selling out before it had a nuts deck like Veyran to go in.

Veyran also ends up in the 99 of decks like Kalamax, but I don’t know if that makes anything move. Kalamax is pretty popular already and I don’t know if adding Veyran to the 99 juices it at all. You can certainly look at Mizzix and Kalamax decks, though, to see if anything sticks out to you. I can’t catch everything, but I can teach you to fish. Go fish.