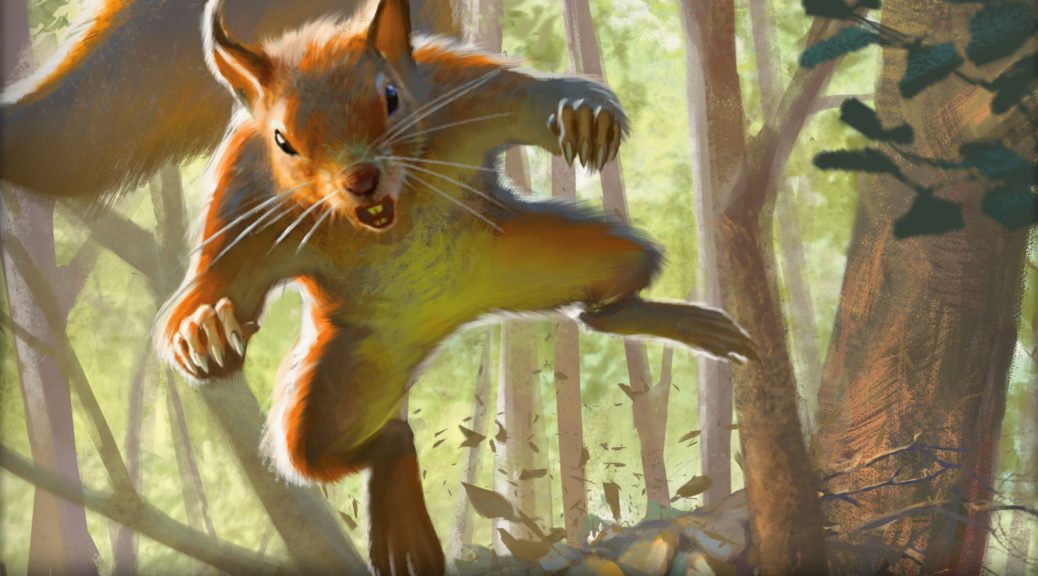 In 1959, General Foods created a new type of dog food that revolutionized how people fed their dogs. It was shipped dry in the form of kibble but was coated in a powdery substance that, when mixed with water, formed a brown gravy that made the food more appetizing for dogs, an animal that routinely eats its own feces. It was all of the saucy appeal of wet dog food but without the heavy, space-consuming cans that came with feeding your dog wet food. The product is still sold today, so presumably it’s fine… question mark.

Why do I bring up Gravy Train, an acceptable form of animal nourishment, in what you were presuming was an article about Magic: the Gathering? The answer is simple – sometimes things make their own gravy. Gravy Train does, you don’t need to add gravy to Gravy Train food because it makes its own gravy, you only need to add water. Have I belabored the point enough – is everyone clear that Gravy Train brand dog sustenance pellets don’t need to have any gravy added to them because you only need to add water because Gravy Train brand edible dog pebbles make their own gravy? You get the concept, right? Are you sure? I only ask because

this card makes its own gravy, and people are out here buying gravy.

And the stuff you’re buying isn’t even good gravy.

I’ll prove to you that a lot of these cards that make squirrel tokens aren’t great in Chatterfang decks by showing you what actually goes in the average squirrel deck.

Just gotta scroll down to Squirrels as a tribe…

Look, I get it. Believe me. Here’s the decklist from the article I wrote about Toski. Yes, I write for another website. Yes, I think there are financial implications to them. No, I don’t expect you to read them. In fact, you don’t even have to read this one, just read the title. Toski is a bad Squirrel deck. I made a Squirrel deck once. Guess who the commander was. It wasn’t Toski. Squirrel stuff went up when Toski came out, just like it did when Earl of Squirrel came out, and even though we never got the deck out of it that we wanted, people still demonstrated their willingness to build a Squirrel deck. EDHREC can’t help us, we’re going to have to either look at decklists manually, or we’re going to have to stop trying to find the right brand of gravy to buy for Chatterfang which, and I can’t stress this enough, is kind of like Gravy Train brand canine subsistence fragments – it makes its own gravy. All you need to do is add water. So what water are we adding?

Off the top of my head, here are like 10* cards that are better in a Chatterfang deck than Liege of the Hollows is (I’m probably going to do like 4 or 5 and assume my point is made and give up).

Baloths is objectively not even a very good card, it just makes tokens a lot easier than a lot of the cards that make squirrels and Chatterfang takes care of the rest.

Can I point something else out? Chatterfang doesn’t make very good use of Squirrels.

That’s it? That’s the Squirrel Lord we’ve been waiting for? Like, don’t get me wrong, it’s a cool sac outlet; it’s removal and the ability to double the number of tokens you make (albeit not the kind) is useful and all, but this sac ability isn’t really the reason to go pay $50 for Deranged Hermit or whatever the @#$%.

I think if people DO end up building a Chatterfang deck, they’ll need as many of the cards that make the deck actually work as they do middling Squirrels cards and we already know what those are. I would focus on getting the cards that will go in the deck but aren’t in the middle of a feeding frenzy today. Without EDHREC to tell me what those are, I’m forced to guess and go to archidekt to look it up manually. The things I do for you, dear readers.

I know we’re not exactly buying in on the ground floor, here, but we’re also going to see gains out of this until it gets reprinted, something that didn’t happen in Commander 2021. This gets printed every year and is almost $10 again – Clamp is the real deal. If you buy in at like $7 and it catches a reprint, buy a bunch of reprinted copies until the average price you paid is like $4 so you feel like a genius when you buylist for $7 later, or sell these for $12 in like a year before Commander 2022 comes out.

This card is a brief mopping-up procedure away from a sharp spike and it’s nuts (GET IT?!?!?!?!!11) in Chatterfang.

What is keeping this from being $10?

What is stopping this from being $5?

I think there are a lot of cards that are good in deck that aren’t Chatterfang that could benefit from the additional attention Chatterfang will bring them. I think Chatterfang kind of sucks and I think people overestimate the ability of casual appeal to sustain high prices.

How big do you think the middle segment is, really?

Anyway, enough ranting. Continue to buy staples for the format and if a card comes along that threatens to make stuff more expansive, make sure you’re not buying gravy.