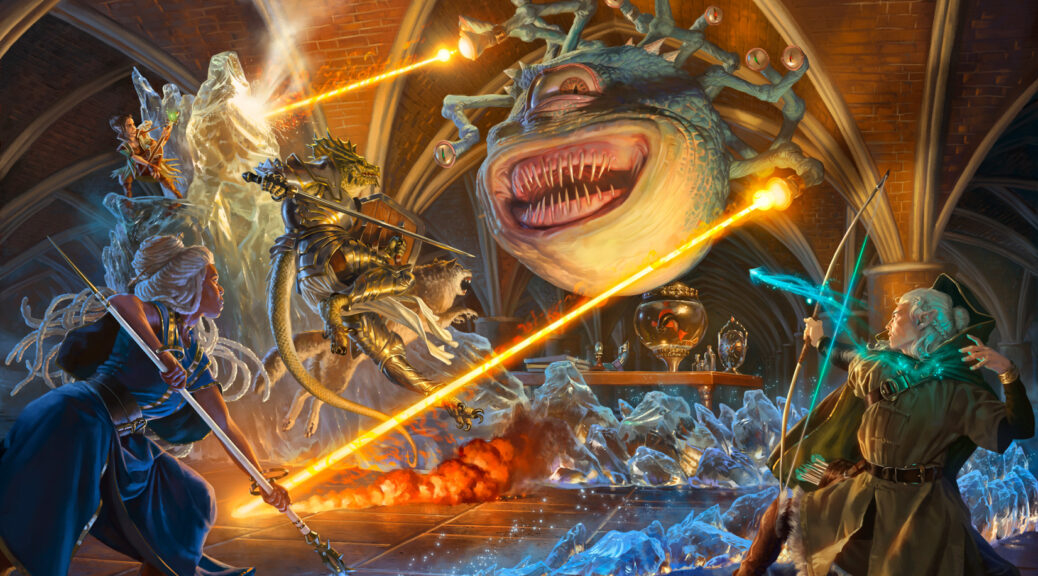 This being the first couple weeks of a set, I like to let prices settle out before moving in on things. I’ve been burned too often by buying too quickly, and so I’m going to be patient. Besides, there’s a lot of other opportunities for things to pick up, especially at rotation looms at the end of the summer.

Today, I want to look at Adventures in the Forgotten Realms, and what looks like a good buy. I want, at the least, popularity in Commander or Pioneer or Modern, or something mechanically unique, or perhaps all of the above! AFR’s showcase frame is an interesting example of something we may or may not want to focus on, because while the showcase foils are indeed rarer than pack foils, a lot of players aren’t into the D&D manual frame.

Den of the Bugbear ($7 for the cheapest version, $18 for the most expensive)

These lands have made very small splashes in Modern, but Pioneer has really been infused with this cycle. Three of these are in the top 11 lands, when measured by percentage of decks that play at least one. There’s not many decks that play a full playset of any of these, aside from red aggro decks with a full four Den of the Bugbear. Mostly you get a couple here and there, but being a 1-2 of in lots of decks is also very good for a card’s future use.

None of these are seeing more than about 7k decks on EDHREC, so any pickups on these are focused more on their Pioneer and Modern use. Don’t expect a huge jump from any of these anytime soon, but I really like the Module version of these cards long-term. Reprints for any of these cards are going to happen eventually, and we want to have the more unique version in stock.

Circle of Dreams Druid ($6 to $12) – Being in nearly twenty thousand decks online is a very good sign, but triple green means this is a tough card to play easily in a deck. There’s a whole lot of decks that would love to have this in play, and we’ve also gotten two new token-based commanders this set. It’s an effect that scales easily, and it’s in a very popular tribe. These are all things that lead to a large growth later on. The graph shows us what we want to see: a price getting to its bottom.

I definitely want to have the Foil Extended Art versions here, because the card fits very well as a future reprint in a Commander deck. That reprint won’t really touch the price on this fancier version, and having copies ready to go when the FEA versions jump to $25+ means we’ll be ready to realize our gains.

Treasure Vault ($8 to $12) – The relatively small gap between the regular nonfoil price and the showcase foil price indicates that there isn’t a lot of casual demand for the special foil version. However, it’s listed as an inclusion in 23k decks! That’s a lot of decks that want an artifact land or some sacrifice/Treasure shenanigans. Abusing this card is something a lot of decks can do, and clearly they are doing it!

It’s also worth mentioning that the assorted versions of Modern Affinity dearly love having an artifact land come into play untapped, even if it is colorless mana. Not every deck wants this card, though. The distinction between $8 and $12 for the foil Module versions means it’s a much better choice for long-term growth and the risk of reprints.

Hobgoblin Bandit Lord ($1 to $2) – I like having this as a spec for future Goblin synergies. It’s a lord in a tribe with a high number of them, and even if the goblins don’t have haste, you’re able to ping someone or something for good damage for a single red mana. FEA copies being available for under two bucks is a lovely opportunity. Handily, there’s no one with more than eight copies on TCG right now, so the numbers might not be as wide-open as the price makes you think.

Deck of Many Things ($2 to $5.50) and Delina, Wild Mage ($1.50 to $2.50) – This is a lot more of a flier about future d20 cards and something being printed that will make it easier for those rolls to do amazing things. We got a trickle of d20 cards in New Capenna’s Commander decks, and it might be a consistent thing with those decks going forward. Yes, there’s randomization that they want to encourage, but eventually, we’ll get something that makes a critical roll that much more likely. When that arrives, these two cards will be among those that jump to a much higher price. We might even get something for that in Commander Legends 2: Baldur’s Gate.

Teleportation Circle ($3 to $7) – Finally, let’s do a staple for Commander decks that love to blink creatures. You may know someone, or be the someone, who will have the Yorion-Charming Prince loop locked in during a Commander game, blinking a ridiculous amount of things back and forth. It’s an archetype all its own, and with a couple of strong choices for different commanders who encourage that behavior. The Circle is not just a strong Limited card, it’s also really easy to abuse in Commander, as evidenced by the FEA price and the inclusion in 13,000 decks online. Again, it’s a strong contender for a reprint occasionally, so having the FEA versions ready for the price increase is where I want to be.