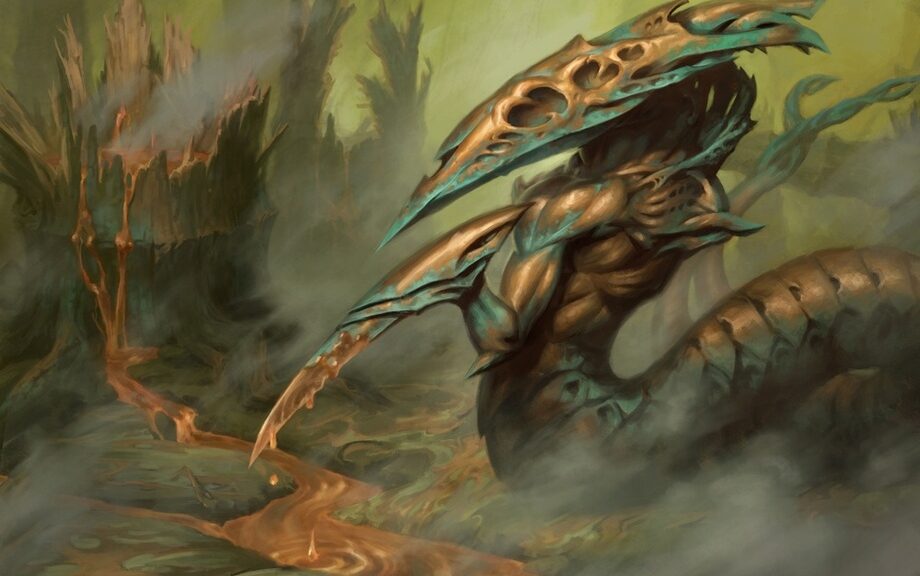 We were given a hint of Dominaria United, and there’s been some leaks, but the more notable news is that some Secret Lairs have shipped with Foil Extended Art Slivers!

If you’re new to that creature type, that’s okay. We haven’t gotten any new Slivers since Modern Horizons 1, so it’s been a few years since the tribe of tribes has gotten some love.

However, if we’re about to get new Slivers, the world is about to go wild.

So far, I’ve been able to find pictures of six Sliver cards, including their collector numbers:

This tracks with the usual arrangement of collector numbers: WUBRG order, with lands last. It’s those five colors, then multicolor, then lands. Secret Lair has been different, with collector numbers starting at lands and going sort of chronologically. The Left-Handed Lair started at 9999 and worked its way downward, for instance.

In terms of how many Slivers there might be, we’ve got a big frame. Before Ward Sliver, the last SL collector number we see is 609 for the Hawkins National Lab and then 676 for the Pyrite Spellbomb from the Fortnite lair.

The big deal here is that there’s a LOT of Slivers left to go…and also, not too many. If there’s a new round of Slivers, we know full well what happens to the existing ones: the prices go crazy. Let’s get into some examples.

Sliver Queen is on the Reserved List. We aren’t getting more. I don’t put it past Wizards to print Sliver King as WWUUBBRRGG and have some ridiculous way to make a horde of Sliver tokens, though. The graph here doesn’t do the spikes justice, as copies sold for just under $600 during the most recent spike last year.

However, being an already expensive Reserved List card is going to make the Queen go bananas again. Near Mint Copies are currently in the $275 range, and I wouldn’t be shocked to see NM Queens break $500 with a new Commander or a new batch of Slivers. Keep in mind that Sliver Queen has some interesting offshoots: The oversized Commander’s Arsenal version is more than $100 and the Duel Masters version should see a jump too.

But if you want to make money without buying high-end RL cardboard, we’ve got other options.

Sliver Overlord is at its lowest it’s been in some time, with all three printings in the $30 range. The Scourge foils with the old border are up there in price, but with so few copies moving around, I’d expect big jumps there. The other versions should at least hit $50, given that Overlord has always been the most logical Commander for the tribe, given those two amazing abilities.

It’s entirely possible that for minor Slivers, that we get a FEA version tossed into Secret Lairs. I’m inclined against the big ones being in there, because we already got Overlord and Hivelord, but most of the useful ones will possibly make an appearance.

The First Sliver and Sliver Hivelord are pretty safe, I think. Both are wonderful inclusions in the deck and are worth evaluating in their premium versions. The First Sliver in retro foil at $22 is the most appealing, but there’s also etched versions out there too. I definitely like the retro versions over the pricier original MH1 versions in foil, but the big risk is both the SL yet to come and what version might be coming in Dominaria itself.

Sliver Hivelord should be pretty safe, as there’s already been a SL version in the Thomas Baxa Lair. The cheapest foil version of Hivelord is the SL version, as the M15 version is $100 and will go crazy indeed in the new wave of Slivers. Right now there’s a few foil SL versions under $20, but it ramps pretty quickly to $25 and beyond.

Lavabelly Sliver as a MH2 retro foil is probably not going to get a reprint, but Cloudshredder Sliver in retro foil as part of Time Spiral Remastered is much safer. The TSR print run is done, we’re not getting more and frankly, we didn’t get a huge amount of what there was. TCG has only 38 foils listed for the retro foil, most in the $20 range, and considering what abilities you get, most Sliver decks want to have a copy.

It’s worth mentioning the FNM Crystalline Sliver too. There’s not a lot of this available, and Shroud is an ability that can have downsides, like no equipment or untapping. Still, if the wave breaks, I wouldn’t be shocked if this 20-year-old FNM promo broke $100.

I do not think Morophon, the Boundless would end up in five-color Sliver decks. While it’s a neat trick, it’s a lot of mana to pay for not a lot of effect. What I am very interested in, though, would be other tribal enablers. Guardian Project is a great one, but don’t overlook things like Herald’s Horn and my favorite for Slivers: Reflections of Littjara.

Reflections is dirt cheap right now, both in FEA and the bundle version with alternate art, but Slivers more than most other tribes would really benefit from doubling each one that comes into play, since so few of them are Legendary. Plus, doubling up on static effects or ETB abilities gets out of hand real quick. Dormant Sliver is a strong contender to be an EA inclusion, but if you want to really get nuts with the card drawing, you want Kindred Discovery.

I don’t think the current price of $6 is the bottom for this card, either. We’re on a good track, but in terms of a long-term spec I fully expect this to dip to $5, but with every tribal deck that can play blue, this should be one of the first inclusions. Not only does it trigger with tokens, there’s no size restriction (such as Temur Ascendancy or Garruk’s Uprising) and if you run out of things to play, then attack and draw some more cards!

While I’m leaving out mention of most of the possible SL inclusions as FEA versions, there’s one Sliver that rises above the rest for me and deserves special mention: Hibernation Sliver. This stupid card is so dang backbreaking, as it allows Slivers to escape all sorts of situations. It’s an odd one, in that the original nonfoil from Stronghold is about $4 and the shiny Premium Deck version is a couple bucks more, but neither has a lot of copies online. This is the Sliver that every deck wants to have in play, an emergency exit in case of board wipe, and the one I’m going to buy up fast if it’s not reprinted.