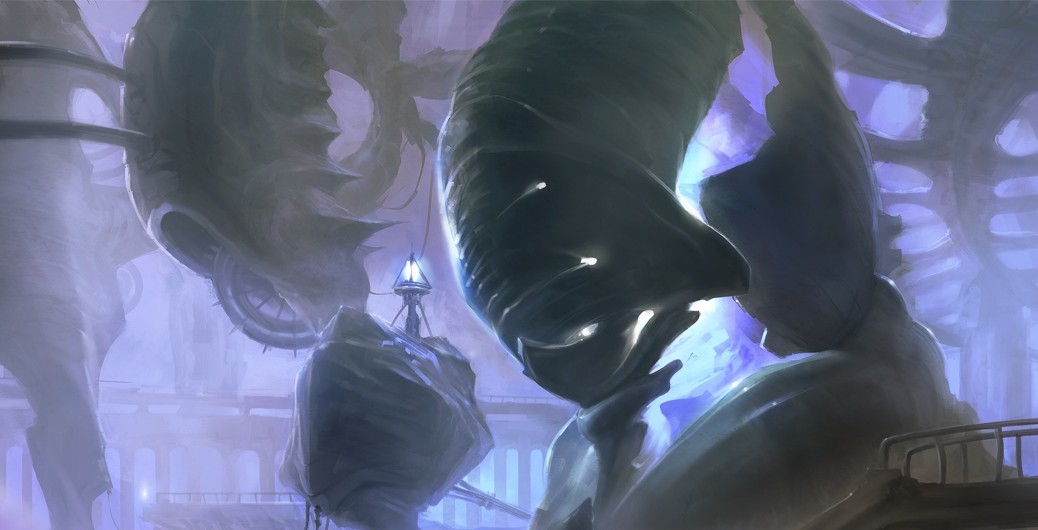 In just over a year, PucaTrade has become a dynamic and somewhat controversial new platform for Magic players across the globe to trade cards without worrying about immediate fees or payment processing.

The heart of the platform rests within the use of a pseudo-currency, Pucapoints, that stands in for actual currency when pricing cards on the site. On PucaTrade, Magic: The Gathering cards are priced in Pucapoints in a bounty board model, wherein whoever claims another user’s posted Want first gains the right to send that card and receive the associated point value once the recipient confirms receipt.

PucaTrade claims that their algorithms crunch prices from across the globe, but in my experience, from a practical perspective, they seem pretty tightly tied to TCGLow NM, with a delay of a couple of days. (Note that this makes capitalizing on flash-in-the-pan spikes tougher, as is likely intentional.)

Many users have certainly expressed concerns over their inability to have specific high demand cards shipped to them, and these concerns are accurate on a platform where many of the most active users are often looking to do the same things at the same time. If a card gets hot, a la Collected Company, there is an initial flurry of activity as speculators dump their copies into the system to reap profits in the form of points gains. (Note: The fact that many users do not make use of recently introduced upper limits provides an ability to ship falling cards into lessened true demand.)

Later on however, if the card settles into staple status, there will be far more demand than supply within the platform, often making it tough to get the cards you want as soon as you want them.

Another problem with PucaTrade is the inability to out your Pucapoints easily into real dollars, something that MTGO investors have been able to do fairly reliably at rates between .90-.95 USD/tix over the last few years. Without a deep network of bots in need of the currency during periods of high activity, and with many users having trouble turning points into high value cards, the Pucapoints to USD exchange rate has been seen as low as .70 on Twitter and relevant message boards.

With all of this in mind, I felt that as a fellow owner and advisor of startups I still at least owed the ambitious PucaTrade team a chance at winning me over as a champion for their platform. As a result in late March 2015 I set out on my personal Pucatrade adventure, with a few specific goals. Having chatted with some peers with similar ambitions, I figured out the angle of attack that seemed right for me:

1. Trading up seems to be one of the best modus operendi to adopt on the site. Generally, trading up defines any trade where you end up with fewer cards of higher individual value that what you laid out. An example would be trading 10 LOTV for an Unlimited Mox Emerald or the trade I made into an Unlimited Black Lotus at GP New Jersey last fall. I prefer to trade up wherever possible because my work schedule leaves a limited amount of time for handling cards, and there are already several thousand taking up space where they should not be. As such, trading up allows me to lock in profits across a broad range of earlier specs without taking the reductive margins of a buylist order, and with the additional potential upside of one holding one of the most powerful and desirable cards in the game.  Ultimately, my goal is to trade the majority of my specs up into a formidable collection of high end cards, and then out those cards to private sellers to fuel some major future life event.

2. As with any move on PucaTrade, trading is first prefaced with the acquisition of points. To do this, you need to add your inventory to the site, watch for good opportunities to ship at a profit, and accumulate enough points to fuel the trade-up level you are targeting. In my case this was a minimum single card value of $500 USD. My timeline for accomplishing this goal was 6 months or less. The other part of this process is to severely limit what you add to your Want list as you’re building up your point base, so as to accelerate your accumulation of points and ensure that you aren’t just cycling points from one set of cards to another. (Its worth noting that this may represent an equally valid strategy if you’re using Future Value Trading methods, but that’s a separate discussion.)

3. To compensate for the time and cost of shipping dozens of cards, my intent was to ensure that my outbound cards were part of at least one of the following parts of my collection:

4. Trading up on PucaTrade is all about networking. To date, the platform is not doing a great job of connecting users that want to make deals in general, rather than deals that are about a specific card. As such, you need to be paying attention to which users are involved in major deals on the site by reviewing recent deals, checking who may be advertising cards for trade on Twitter, Facebook or other social forums, and start building a contact list you can reach out to when trying to trade up.

Using the above as a template for action I spent the next few months trading for value by sending the following cards out to PucaTrade members.

You’ll note a number of noteworthy cards in this list, including:

Sum total, I’m proud to say that I took zero losses on the cards shipped, and that average profits vs. original costs varied from 15% to well over 300%. It would be foolish of course, to underestimate the real costs of shipping all the cards, and the value of my time in prepping all the cards for shipping, with total time spent likely equaling a few hours. This was however mitigated somewhat by the fact that I already have a daily ritual of prepping shipments while I’m watching online media/TV, allowing me to distribute the time cost across additional sales.

Along the way I also let a few inbound cards slip through the cracks, creating a minor drain on the accumulation of points: 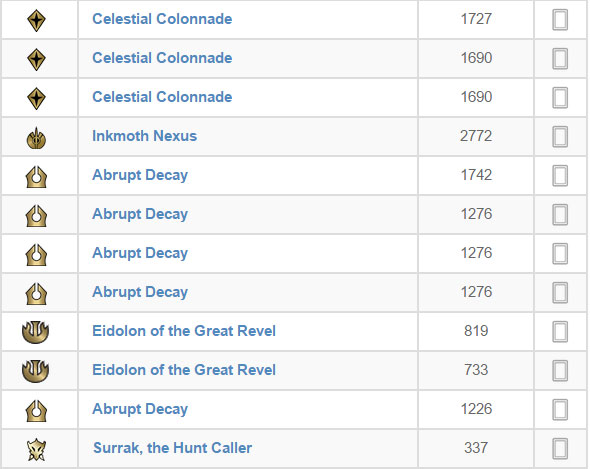 So by late June I had almost $1300 USD in points built up and a strong hankering to find a strong card to trade up into and demonstrate that my trading thesis was feasible. Now along the way I had taken note of many PucaTrade users complaining about getting stuck with points. Simultaneously however, the community was definitely growing month to month, with a lot of trades in motion and a number of notable deals getting done in the $500-$1000 range. Our very own Travis Allen notably managed to acquire a Judge Foil Elesh Norn, Grand Cenobite, which seemed encouraging. This only served to reinforce for me that networking was the key to success along this road.

As a result I started stalking the biggest players on the platform, tracking them down on social media a few at a time, and letting them know I was looking for something big to trade into.  I barely bothered with a Want list at all, opting to instead make a note in my profile that I was looking for big ticket items and had points at the ready. The various parties I ended up engaging with tended to be either judges, major collectors or small to mid-sized vendors.

Along the way I was offered several pieces of Unlimited power, including Moxes and blue power, mostly at MP-HP conditions. I had decided however that to ensure maximum future liquidity for my acquisition I would try to ensure that my “purchase” was of at least SP quality. The idea was that my deal cycle would not truly be complete until I had managed to sell whatever I acquired, and that reselling a higher quality card would be easier down the road.

It was a few weeks into my sporadic probing that I stumbled over the following tweet:

The Workshop looked in decent condition in the provided photos and the price was right, so despite the seller not mentioning PucaTrade as an option, I spent the extra few seconds to ping him and see if he was game to negotiate. As it turned out he was indeed on PucaTrade, and open to the idea since he had been trying to sell the card for a short while without success via other venues.

After a bit of a hassle getting the situation straight with my seller (who had ultimately shipped the card without my consent based on my initial expression of interest), we reached a reasonable price of 80,000 points for the SP+ Mishra’s Workshop. This represented a fair discount against the NM point value of 87407 noted on PucaTrade and was also a successful profit taking on less than $400 worth of cost that fueled the points that were spent on the deal. That’s an easy double up with the potential for additional upside, depending on the length of the hold and the method of the eventual sale (due to potential fees on Ebay or TCGPlayer.) 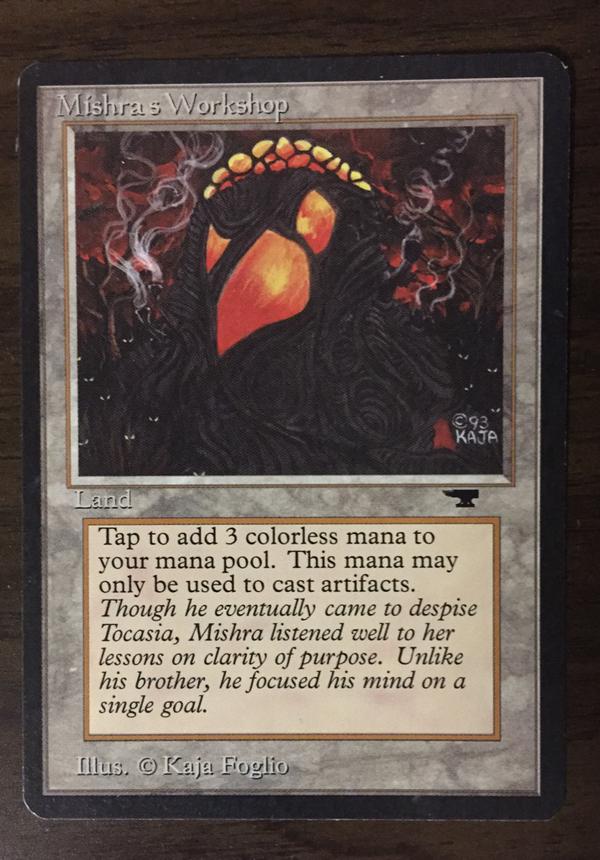 Workshop also represents a near ideal card to trade up into as a card that is on the Reserved List, and hence unlikely to be reprinted. It had also been showing signs of an imminent price increase with low supply across the major vendors and rising buylist prices. As an essential part of artifact based Vintage decks, it also seemed likely to hold it’s position in the Power 20.

Noteably another Workshop changed hands at NM quality this week for 91, 275 points, and the lowest priced of only two copies on TCGPlayer is sitting at $900, so there’s a decent chance I should hold the card for a few months to see how things shake out towards the holidays.

With the Workshop in hand my confidence in PucaTrade as a solid option for trading up has now been solidly established. With my account standing at $600 in Pucapoints or so, I shipped an additional $400 in cards this week to set up for our next PucaTrade adventure. See you guys next time!

p.s. A special shout out to @nathanjweber for making this deal possible. Nathan was a stand up operator in the end, and you should definitely connect with him as a potential trading partner on PucaTrade.
James Chillcott is the CEO of ShelfLife.net, “The Future of Collecting”, Senior Partner at Advoca, a designer, adventurer, toy fanatic and an avid Magic player and collector since 1994.

5 thoughts on “Anatomy of a Deal: Trading Up on PucaTrade”