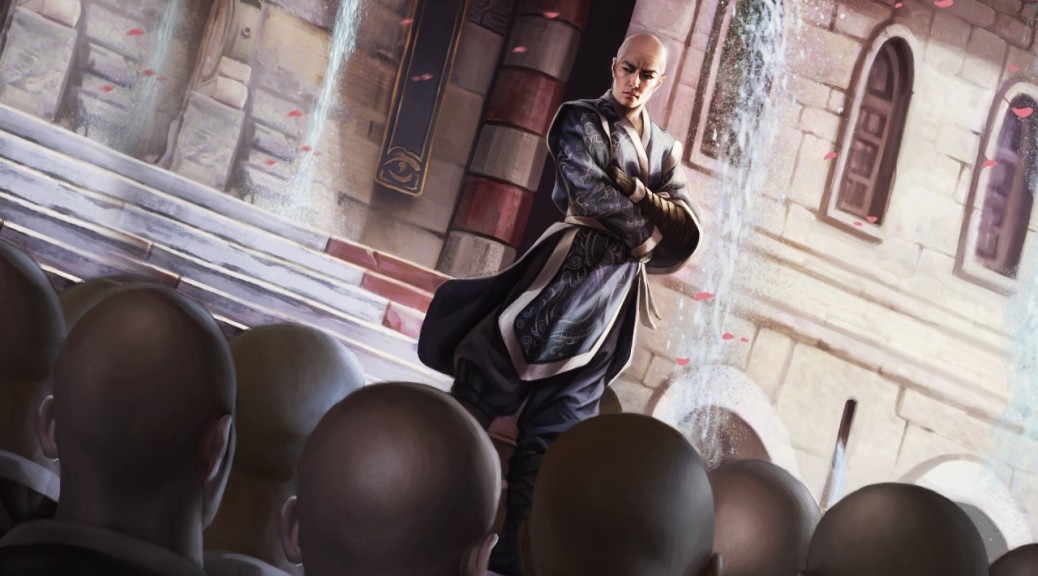 I have been trading magic cards for 20 years.

It pains me to say, but I’ve made some terrible trades in my lifetime. TERRIBLE. Like, Onslaught fetch land for brand-new-shiny-mythic bad. I was 33, it’s not like I was a teenager who didn’t know better. (The teenage trades were more “my Tropical Island for your Lord of the Pit and its new best friend Breeding Pit.” Sigh.)

Today, I want to share with you four simple rules that if you follow them, you will never lose money at Magic. These are my safe rules, rules that will prevent you from losing significant value. I’ve never been one to speculate on cards or act in fevered response to results.

Rule #1: Trade all opened cards away at a pre-release or release event.

I have mentioned this rule in the past, but it remains a basic tenet of my philosophy. Supply is at its smallest, demand at its greatest. People lack the patience necessary to save money, all they see is the new hotness.

This is especially true for the brand-new mythics. The price on everything is going to go down (more on that in a moment) and even the bad mythics have a certain number of people who have to have the card. Fill that need for them. Trade them a bad card for the current premium price.

My personal experience: The Return to Ravnica prerelease. I opened a Vraska the Unseen, and within ten minutes of the end of the event, I’d found someone to trade me a Guildpact Stomping Ground and $15 in cash for it, since the planeswalker had a price at the time of $30.

Current example: Arlinn Kord. If you’re able to trade this away at $35-$40 or so (its preorder price) then you’re going to be far ahead. Only one planeswalker has kept that sort of price recently: Jace, Vryn’s Prodigy. Arlinn has the chance to be good, with tokens and targeted damage as only two of her five abilities, but as history shows, she’s more likely to be $20 in a couple of months.

This is closely related to Rule #1, because no one wants to lose money on a preorder. What people remember is the one that got away, the Jace, the chase mythic, the surprise rare. Our memories are not as good at recalling the mistakes, the ones we bought at too high a price and did not make money on. Somehow, mentally, we accept those mistakes but tend to fixate on the opportunities we didn’t take advantage of.

I’m here to tell you that because almost all prices drop over time, there’s no financial benefit to preordering cards. Their prices are going to go down. Look at Oath of the Gatewatch. Kozilek was preordering for more than double his current price. Oath of Nissa was $8, now it’s a little over $2. You might hit it big on the one or two that are more expensive, but mostly, preordering will leave you in the red.

My Experience: Thespian’s Stage. I bought ten of these at $4 when it was first revealed, and I traded for them at $6…and then at $4 again…and then at $2…and then at $1…and now it’s finally back up to $2, three years later. Don’t be me!

Current example: Thing in the Ice. $15-$20 for this card is just silly. It can’t protect itself, and Reflector Mage is going to make you so very, very, very sad. Don’t preorder this. Don’t trade for this. Just wait. Please.

Rule #3: Do not buy singles until at least one month has passed.

This is one of the simplest concepts to get: Cards are most expensive immediately after release, and they are going to trend downward after that. Even when Standard cards spike, it’s rare that they maintain that spike, especially for a rare. Here’s Eldrazi Mimic: 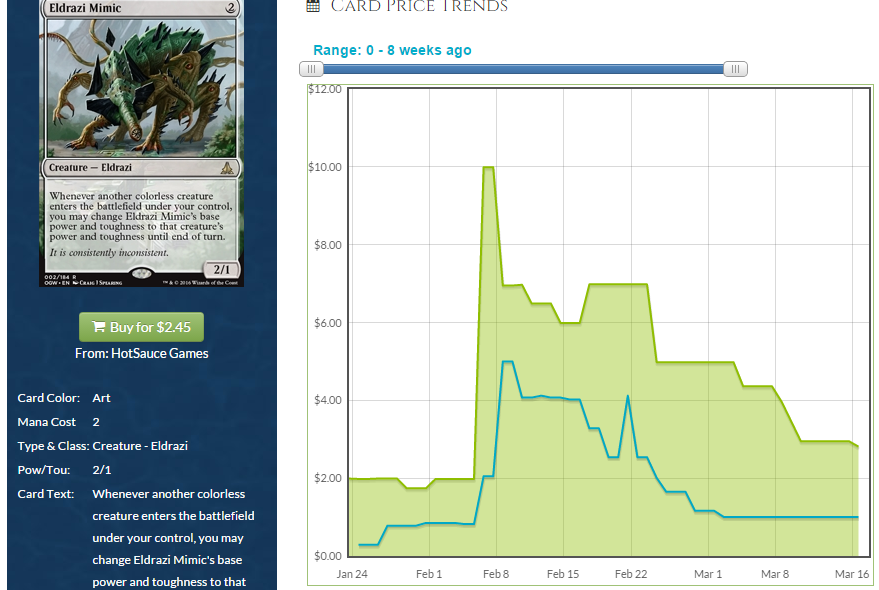 Even as a four-of, even in the hottest deck in Modern, this has not been able to keep its price. Ten dollars that weekend, and trailing downward since. The vast majority of cards are going to lose value as more copies are opened. If you have to have a card for the new deck you’re playing, understand that you’re paying an extra premium for it. If you needed Gideon, Ally of Zendikar in the first month, you had to pay $40 or more! Now it’s down to $20, a more reasonable and manageable price.

My Experience: Prophet of Kruphix. I picked up a lot of these at about $4 soon after it came out, because a card this good just had to eventually find a home. It never did, and they went into long-term storage, where the Clash Pack and then the Commander ban keep shoveling dirt on my dreams.

Current Example: Jace, Unraveler of Secrets. He will have a big initial price, because his abilities are very strong. As time passes and more are opened, he’s going to drop. No one is going to play four of a Jace that costs five mana. Even the Jace, Memory Adept version was a one- or two-of in control decks as a finisher, and this Jace is defense and card advantage.

Rule #4: Stock up on things at the end of their block.

This is the time to buy stuff from Battle for Zendikar and Oath of the Gatewatch. It’s no longer going to be opened at Grands Prix, at Preliminary PTQs, or even at Friday Night Magic. There’s a new set getting all the attention and now is the time that the supply is at its greatest. This is when supply is highest, value is at the lowest, yet the power is the same.

My Experience: Jace, Architect of Thought

Look at this graph for that Jace. 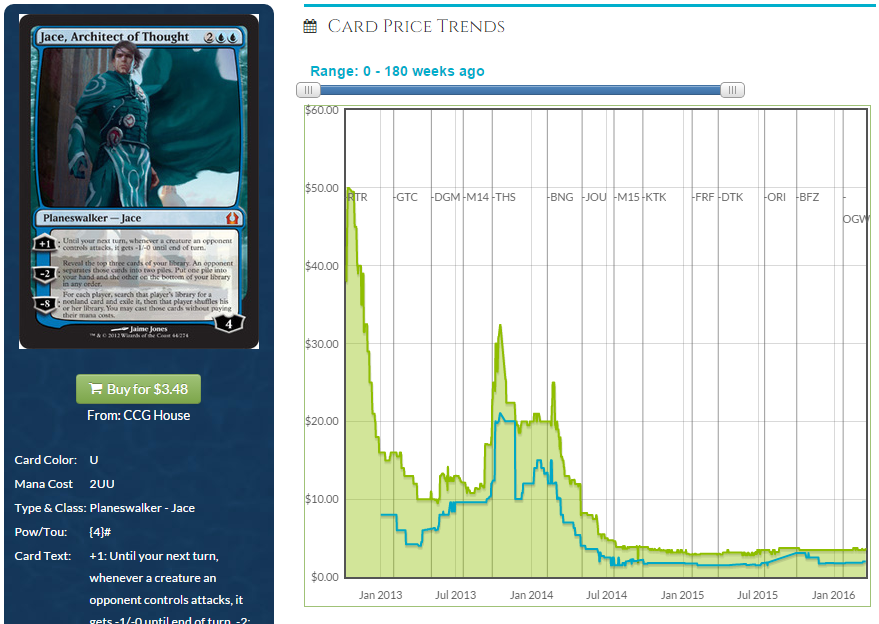 During the time of Dragon’s Maze and Magic 2014, you could get him for $10. When Theros came out and devotion to blue became relevant, his price spiked hard to $30. Picking up cards when they are moving on to a new set is the perfect time to build value to be released later.

Current Example: The Battle for Zendikar lands. Especially because no one is playing this as a playset, they are primed to go up when fetch lands rotate out of Standard. You have been given a fair chance to get it cheap!

These are my rules, but come to the forums and share your financial rules!