Last week I amped up my normal rhetoric and went pretty hard against what I think is intellectual laziness from content creators when it comes to recommending that thousands of people go in on tens of copies of a card and then sit back like “Are you not entertained?” when lo and behold, the price goes up. I’m sure I used to do that. The Dunning Kruger effect basically guarantees I used to do easy, low-value stuff like that and probably thought “Man, I’m good at this.” and it’s possible that 5 years ago, that’s what all of us did. But MtG Finance has come a long way in the last decade. Binder grinders are an endangered species. Watching coverage and writing an article Monday morning to be published Tuesday morning about what to buy based on weekend results is a thing of the past. Looking back, I can’t even believe that ever worked. Since Theros, people have been buying cards on Friday before they even put up results and stores are cancelling the orders on Sunday.

We’ve had to get better at this and that’s a good thing. You’re getting more value for your money if you’re paying for non-obvious advice. I’ve been writing since April 2012 (I looked it up yesterday) so I basically have a Bachelor’s Degree in MtG Finance at this point and I’d hope I can have some non-trivial insight. To whit, let’s delve into a topic I brought up last week about stuff “trapped” below that invisible barrier of $2 on TCG Player.

What Is The Thing?

TCG Player has a policy that requires you to spend $2 from each seller even though they can combine orders from different sellers and fulfill the orders themselves. It’s fine, who wants to go to the post office for a $0.75 sale? Who wants to process an order that consists of 1 rat token? This is a decent thing to keep sellers from being annoyed. Instead it passes the annoyance on to the buyer.

If a card is being bought out, people will find an excuse to grab another card from a seller to hit the $2 mark (I could have sworn it used to be $5. $2 is a lot less annoying) so they can grab a played copy of a foil that’s going to be like $8 soon. The damaged copy will still be like $5 and you doubled up, but fees squeeze you so make sure you grab other worthwhile cards to mitigate the shipping. But what do I know? I buy specs from Cardshark.

I think this invisible barrier tends to obscure slow, organic buyouts but not calculated, panic “someone on YouTube made a video about this card” buyouts.  Obscuring the organic ones is actually probably a good thing since it gives us time to slowly acquire our copies at the same price from other sites. Card Shark running out of foil Temur Ascendancy foils (don’t bother looking, someone already bought them all, or just never listed them because who sells on Cardshark at this point?) isn’t going to trigger people to notice, but TCG Player doing so is.

I think sub- $2 cards that get a lot of play in EDH have a lot of growth potential, especially when they’re foil which makes them tougher to reprint. Since these are good opportunities, TCG Player is doing us a favor by making it a little tougher for people to signal that copies are drying up because a few played copies are going to sit on TCG Player forever, and sometimes the damaged copies are the entire front page of foils prices, meaning people see the price is like $1.75. Canny financiers will head to the next page to see the lowest price for a NM copy, but not everyone is canny. Hell, not every seller is canny enough to check the lowest NM price rather than lowest absolute price when they list cards. This effect is worth being aware of and it’s worth buying around. TCG Player prices are a house of cards sometimes, and a small amount of copies selling out on one website can make a lot of copies sell out on a lot of websites as people chase the “spike” or “buyout” or whichever mis-applied term ends up festooning the Reddit post.

Speaking of foils, I have a few more picks that I think you might want to take a look at. 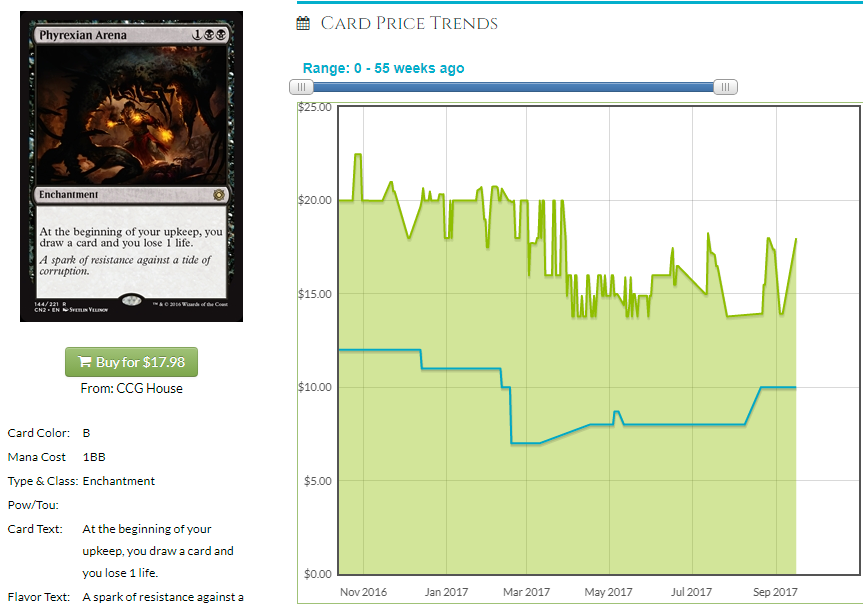 A $90 Apocalypse foil (scarcity sucks) hasn’t really stopped the Conspiracy foil from being a fraction of that and having a very low multiplier. No one is buying Conspiracy 2 packs and the chance to get one of Magic’s best Black cards for this cheap will eventually appeal to people and there won’t be much supply to step up and fill in. The art is different and while the Apocalpyse art is better, this art is better than the 8th edition art, objectively. Subjectivity matters were wallets are concerned, but the chance to get a foil Phyrexian Arena for closer to $10 than $20 should perk people up. These are starting to disappear and it wasn’t too long ago you were paying $13 for a non-foil. Remember that? It wasn’t that long ago. 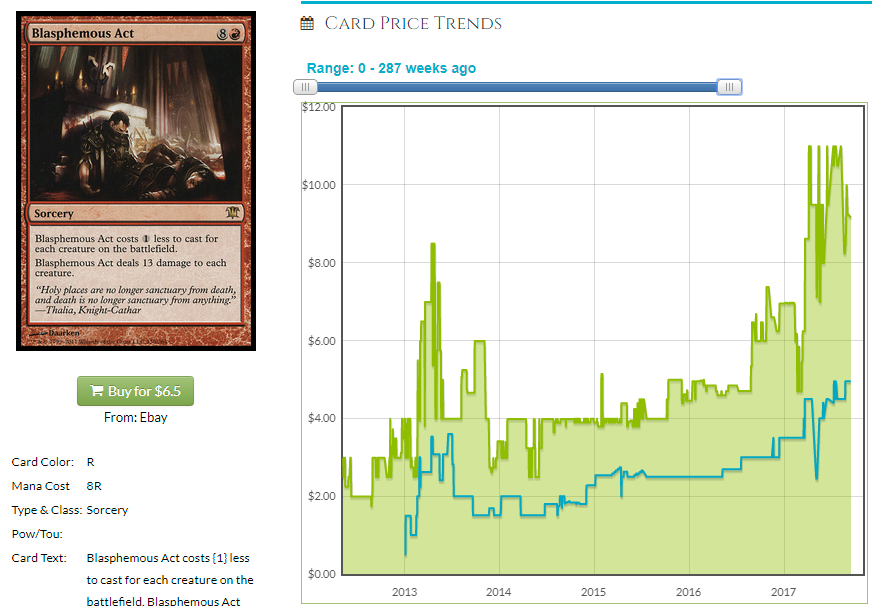 This is the best red mass removal spell that doesn’t blow your lands and stuff up in EDH and that’s pretty useful. It’s also very reprintable in non-foil and has shrugged those reprints off. This is a card that appeals to red players and red players are the most durdly and least likely to want to foil their decks out. I think next week I will take all 100 Top cards on EDHREC, or maybe the top 10 by color or something and look at the average foil multiplier by color and see if anything emerges. Data is beautiful, after all. For now, look at a card that’s $3.99 a year after being reprinted in a popular deck and notice its one foil printing is at a 2x multiplier. Maybe this card proves that durdly red EDH players aren’t foiling out their durdly red decks, Or maybe this is about to pop and you’re lucky I noticed. 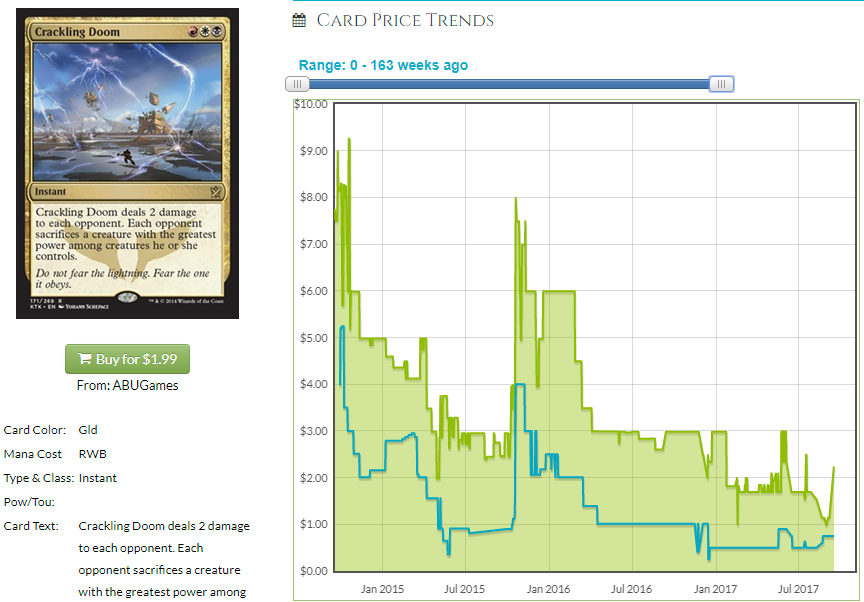 What’s true for Red in EDH might be doubly true for Mardu. This graph looks really funky. Modern or dare I say Legacy demand could case a third peak. For now, this is an 8x multiplier on the strength of the non-foil being printed into powder and the foil being not powder. This is making me really want to look more into the average multiplier by color, wedge, shard and… whatever Commander 2016 was. Is Crackling Doom due for a third spike? We know what happens with second (and third, by extension) spikes, so I imagine this is a card with a lot of built up potential energy and all it needs it a push. I’m hoping this article isn’t the push. Being the 65th-most-played card on EDHREC does’t hurt. Are you foiling your Mardu deck? You might if every card in there is like $0.50 non-foil and $2 foil. Alesha, anyone?

With more data. This article inspired me to spend a lot of time researching so I have some numbers to crunch. In the mean time, if you want to scour this page on EDHREC and then look at foil and non-foil prices and maybe even check the top 100 cards by each color if you remember how to do that (it’s really intuitive)

then that’s not a terrible idea. Next week I’ll be armed with some hard numbers we can use to see if certain colors, wedges, shards, guilds or other configurations are foiled less than others. If I’m guessing, red has the lowest multipliers and blue has the highest. We’ll see for sure next time. Until then!