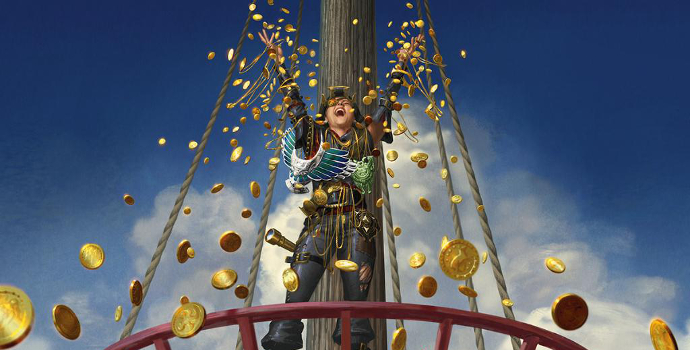 I think my foil spreadsheet nonsense can wait. The spreadsheet isn’t going anywhere (as always, here is the link) and there is more to be gleaned from it. For today, though, I wanted to get back in the practice of trying to make predictions based on upside to older cards based on the printing of newer ones and there was a really spicy card spoiled this week. Well, two, actually. One of them is a little harder to pin down but it probably goes in a ton of decks. 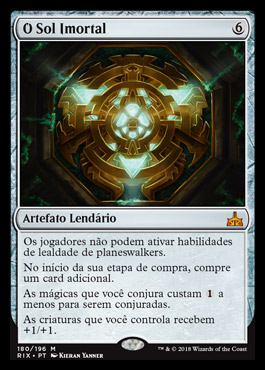 At the beginning of your draw step, draw an additional card.

Creatures you control get +1/+1

This is just dumb. It’s a better* Caged Sun and for the decks that can afford it, it’s going to get a lot of value going. Shutting down their ‘walkers is just absurd value on top of everything else this card does for you. However, since this appeals so broadly, it’s going to be really tough to nail down which decks it improves on its own and therefore I’m not going to discuss it this week. There’s another card coming to town which can reinvigorate an older deck that is still very popular and give some upside to a lot of the cards in it. I’m talking, of course about one of the four other cards from Rivals that are spoiled so far. I’m talking about the good one. 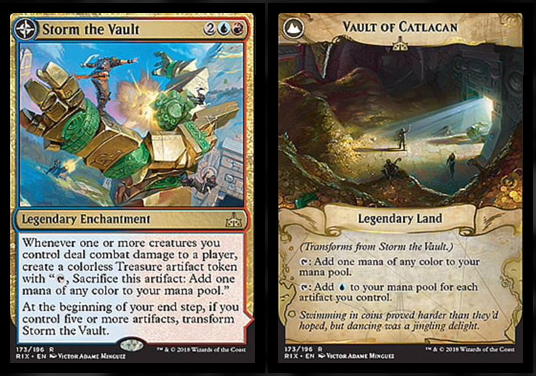 So this is a card. Let’s not be hyperbolic about this card, though. People who don’t play much EDH got REAL hyperbolic about Growing Rites of Itilmoc and compared it to Gaea’s Cradle. That card is not Gaea’s Cradle. It’s much worse than Cradle. This card is much worse than Tolarian Academy but it does have one thing going for it that Academy does not – this is legal. Also, this makes treasure tokens sometimes. So two things. I’m not saying this is a better or worse cards than Academy because that’s a pointless distinction to make when we should be talking about whether this card will make people dust off or build for the first time old archetypes. Will this give anything older some upside? I think it might.

First, let’s take a token look at what we expect from a price perspective on this card. Since Growing Rites is much more playable in EDH than this is and didn’t have the benefit of a card performing poorly in front of it the way Storm the Vault has had, I think the price graph shows points above which Storm the Vault’s prices will never go. 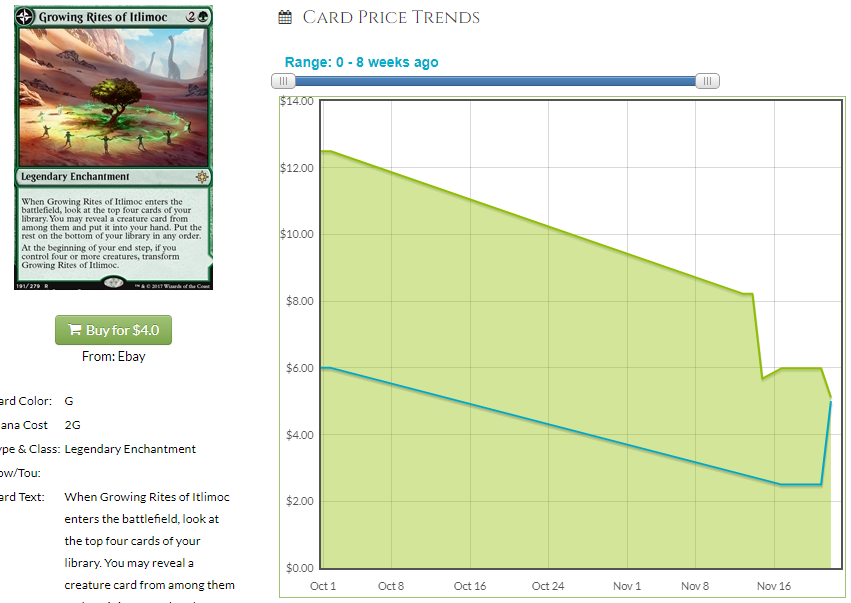 OK, then. That’s about what I expected. I don’t expect Storm the Vault to tail off so hard because I expect people to be a little wiser than they were when they said “OMG CRADLE” the way they did when Rites was spoiled. Then again, I didn’t expect people to say “OMG SPHINX’S REVELATION” when they spoiled Aurelia’s Fury or “OMG DARK CONFIDANT” when they saw Pain Seer, so maybe I am giving this community too much credit.

I do, however, expect Storm the Vault to be relevant and I think it’s going to make people build decks they might not have gotten around to before, namely Breya.

Breya is the ideal shell for this card which makes it pretty narrow but also pretty strong. I can’t imagine any Breya deck out there doesn’t want this and I think this gets Breya decks built and rebuilt. The two colors in the color identity make this card tough to slot in and could hint at a UR artifact commander coming soon – nerds have certainly been clamoring for one for long enough. Should we get that, either in Rivals or soon after, everything we associate with Storm the Vault will have more upside so it doesn’t hurt us to start making those associations now so we have a blueprint later and don’t have to think about it.

What in Breya Has Upside?

So glad I pretended you asked. I think there’s quite a bit worth revisiting since this time a year ago when this set was new. It’s been a year and a lot has happened so let’s take a look at what I think goes up if more people build Breya decks. 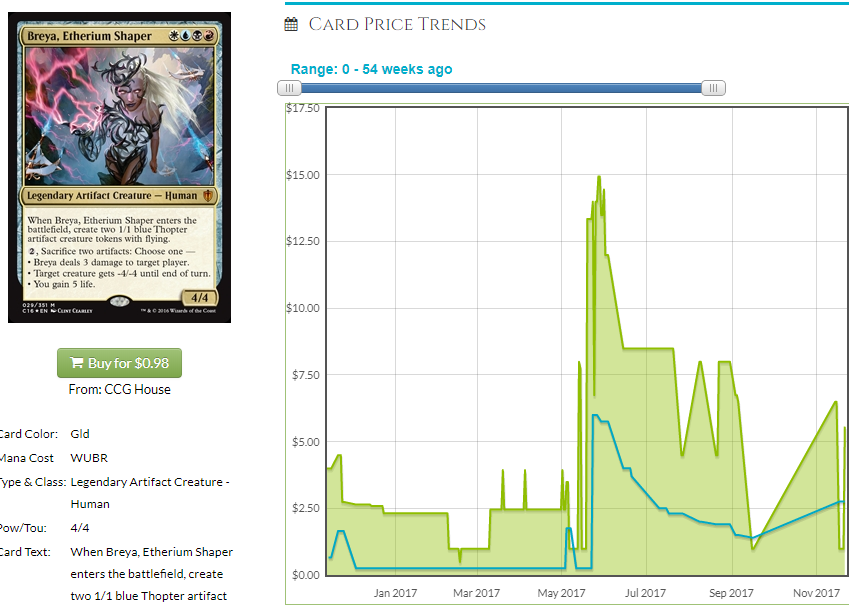 Breya herself is a great place to look first. While apparently Breya decks are popping up in those crazy Target 4-deck repacks for $30, you’re mostly not finding them on shelves. Until we get an artifact commander as good as Breya, she’s the de facto ruling queen of all things artifacts every time they print a new artifact that can go in her deck (or has to, like in the case of Storm the Vault). How much can we expect to make if we buy the card at $5, though? 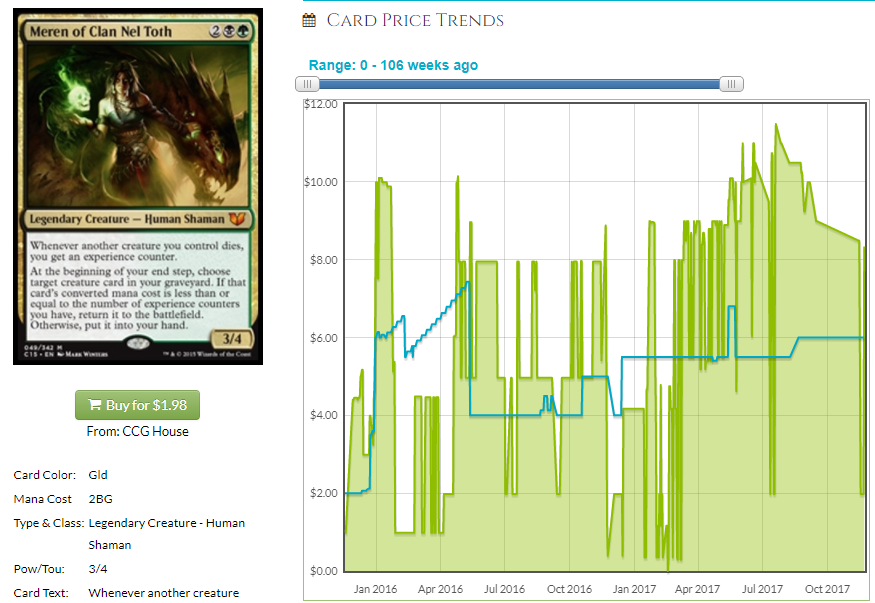 Meren went up a lot faster and there are more Meren decks than Breya decks, but $10 seems like a reasonable ceiling. 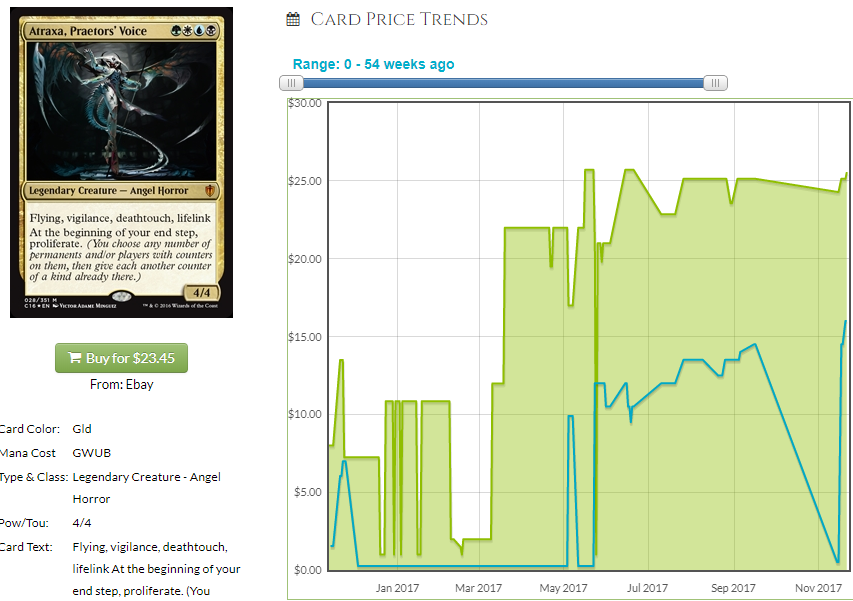 Meanwhile we’ve established precedent for a commander from C16 to go above $10 so it’s pretty reasonable to think Breya could go from $5 to $10 a year from now. Breya’s deck didn’t end up being as tough to find as Atraxa’s but I bet 90% of the Breyas opened were in a deck and with supply dwindling even in repacks, we’re going to see some upside on the price if new printings give us any impetus to build. If we don’t see a better artifact commander soon, people will have to take a second look at Breya. You know why else we want to be using Breya for our artifact decks? 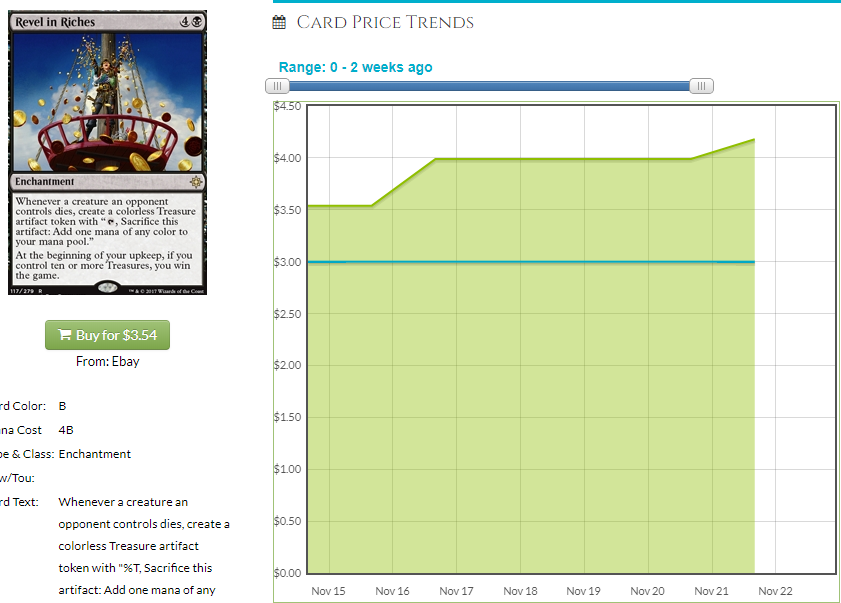 I don’t hate foils of this under $5. I think they can go down but I think this is a solid EDH card and it’s not just good in gimmick decks (I hesitate to compare it to the price trajectory of cards like Biovisionary because this is an achievable goal and you can get there just by casting Damnation so you win by doing stuff you’d do anyway which makes this not a durdly combo card) but rather in any deck where you plan to be killing creatures. I like foils of this a lot and Breya is a great home for it. If this card’s printing wasn’t an impetus to build a Breya deck, surely this plus Storm the Vault will be. I’ll take to my article series and other content websites to make sure of it. Spell Swindle likely goes in the deck, I guess, but Revel is the play. 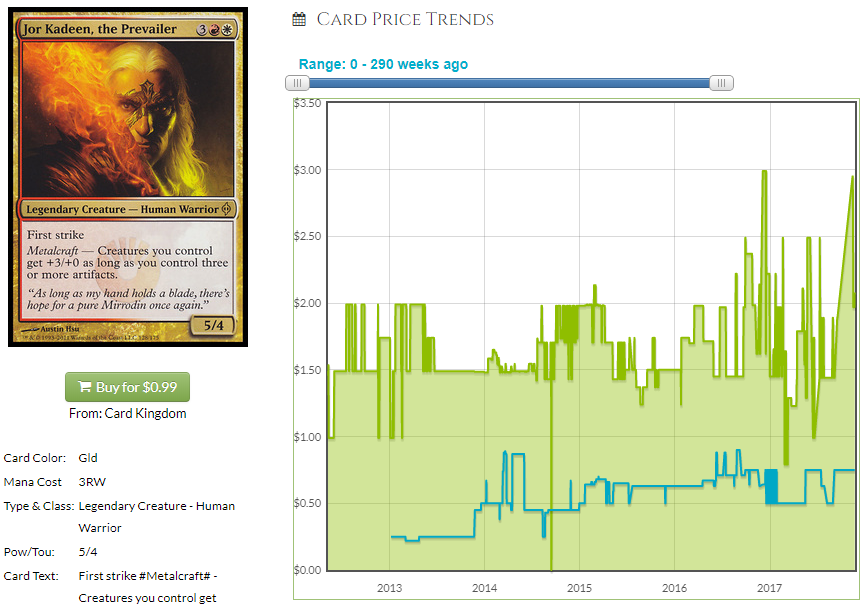 You don’t HAVE to play White, but since you can, it doesn’t suck to take a look at foils of Jor. The price trend seems to be up-ish overall and while this is still not buylisting for more than it used to since I bet it’s easy to replenish stocks of a fringey card, I think the overall price increase continues. This is a fine commander in its own right and if you can snap sub-$3 foils you’re already doing pretty well. I think a small number of copies of these get snapped up and this is a $5 card. This is probably the pick I have the least amount of faith in since I don’t know if it does enough on its own to move even the small number of copies to make this $5 or more, but I think it is a card that takes a small amount of work for a price correction to happen and those are worth noting, even when the card doesn’t seem capable of doing that small amount of work on its own. 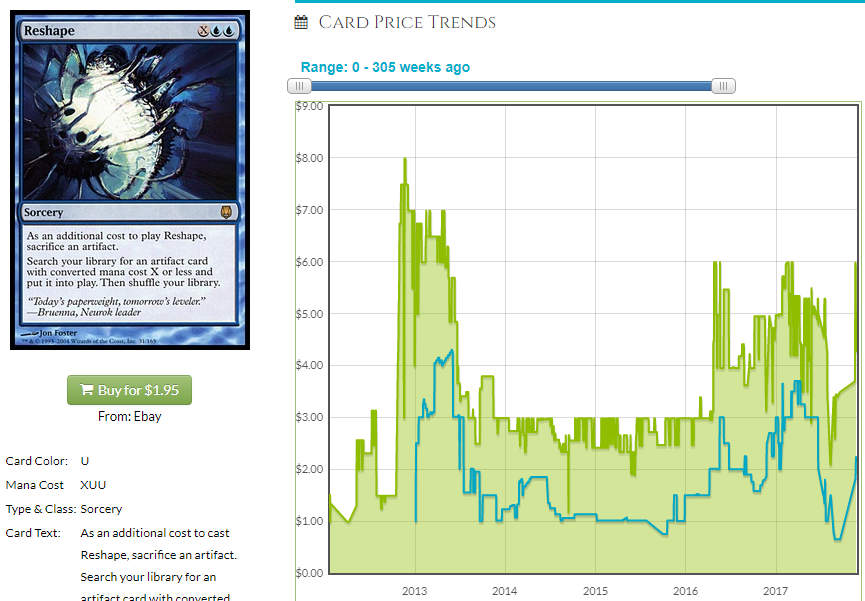 We know second spikes are good and this has the potential to reach its full potential. Modern didn’t quite make this the price people hoped and adding on some Breya demand was good for the price which means there aren’t too many loose copies. This is a pick that needs very little work to go over its tipping point and I think it can do it. New relevance in Modern, a new artifacts-matter card in a set and more people playing artifacts on the back of the printing of Storm the Vault are all factors that make this $10 overnight. Could this get reprinted. I mean, sure. Where? A Commander set? Masters 25? Reshapers of Ixalan? I don’t think this is very easy to reprint. If you’re that worried, grab one of the $20 foil copies floating around. This card is legit and stocks online are not plentiful. I feel good about this one. 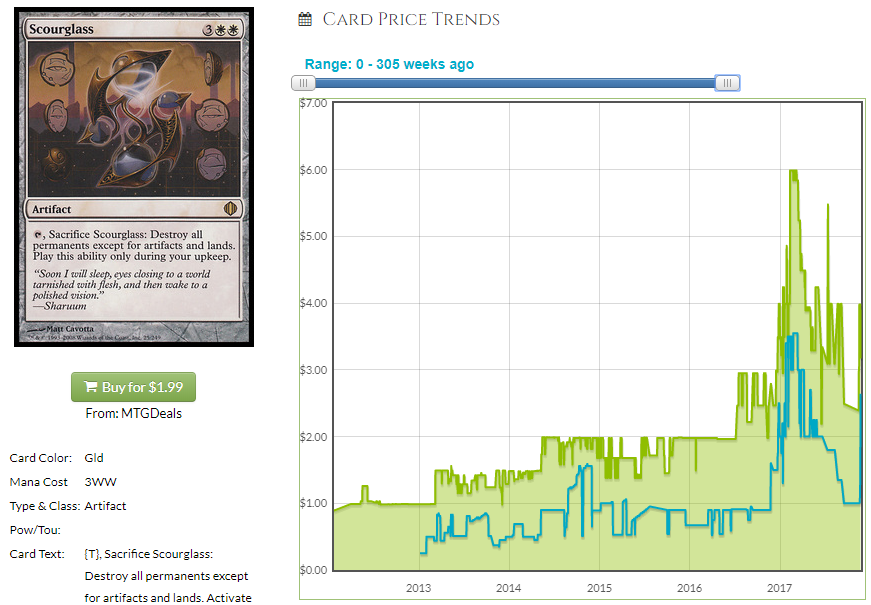 This is one that I’m not sure about. It went up a lot predicated on Breya the first time around and it sort of petered out. Plenty of Breya decks want this, but this has fewer chances to go up outside of Breya so I think tracking stock of this card can be a worst case scenario for what your other stuff is going to do. Other cards have upside from sources outside of Breya, but the White cards associated with Breya have virtually 0 non-Breya upside unless they print more Esper artifact stuff. Could we return to Alara? I wouldn’t hate that. Did that plane get wiped out or some BS? Man, I wish I paid attention to lore, that would be really helpful to know right now. OK, unless someone in the comments says the Godsire ate the whole plane or an Eldrazi destroyed it or whatever, I guess we’ll assume we could go back to Alara at some point. Barring that, White artifact stuff basically signals “Breya upside” and that’s about it.

If Scourglass represents our worst-case scenario, I think the Blue and Red artifact stuff have even more upside. A potential Izzet artifact commander is always a possibility since nerds have been clamoring for it so there are some chances for Storm the Vaults to make some other cards relevant. Watch stuff like Hellkite Tyrant, Mechanized Production and other goofy “Revel in Riches enabler” cards to go up alongside Storm and check back next week for hopefully more Rivals cards to look at. Until next time!