You don’t have to care about EDH to find this column edifying and I get that. You might be less excited about the stupid card that was accidentally spoiled but not yet revealed than I am, but maybe cram your lack of excitement and focus on how much money you’re about to make.

If you don’t know anything about EDH, you might think Boros is great. Boros has been good a few times in Standard after all. A combination of weenies and burn is always poised to overrun opponents before they even get set up and big, flashy angels with swords made out of fire seem to tear it up constantly. You probably think Boros is exciting and fun in EDH. 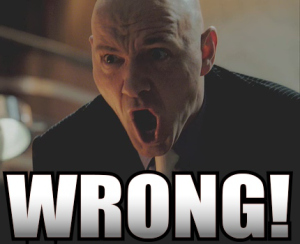 Boros in EDH consists of 25 commanders that deal with attacking with creatures and Brion Stoutarm. You like putting equipment on creatures and attacking? Goody. You’ll love it when your opponent combos off on turn 6 and kills you because you have no way to interact with anything.  Boros can be fun and it can get powerful and I’m not going to sit here and pretend that Assemble the Legion isn’t one of my favorite cards ever printed. But for the most part, if you don’t want to put a bunch of goblins in the red zone, Boros is a bore. That’s about to change and I think that’s more significant than Golgari or Simic getting yet another busted general. This new card is good enough that people are going to build it on principle but also, anyone who is sick of their Boros decks being boring will be on board. Anyone who has a deck of every color combination will want to build this and abandon their stupid Jor Kadeen nonsense. So there is not only future demand, but pent-up demand for a general like this and I think that’s significant. The other thing that’s significant is that since there has never really been a Boros general like this, while Boros staples have some upside because, of course they do, a bunch of brand new cards are about to get a bump and that means they go from bulk to not bulk and that’s the best way to be.

I wish I could show you. The best we have is a mock-up from Mythic Spoiler, which is better than nothing, but only barely. 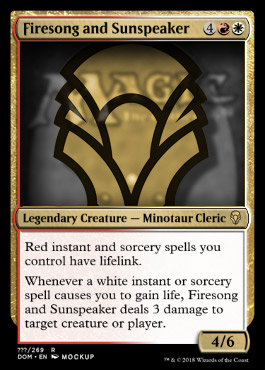 If this doesn’t excite you, you must not play EDH. This card is stupid and it’s about to make a bunch of stupid cards stupider. It has a big enough butt to survive an Hour of Devastation, for starters. The amount of life you’re going to gain from spells like Blasphemous Act (should your spellcows survive) is going to make it pretty easy to dome people with Aetherflux Reservoir or just win the game with Felidar Sovereigns.

People are starting to brew with spellcows already and those people have large readerships who are going to get as hype as I am about spellcows and go buy their own decks. But they’ll wait until Dominaria is actually released to buy the rest of the deck because they are not doing it correctly. Let’s do it correctly and get ahead of the ensuing buying frenzies so we can be sellers when everyone else is a buyer.

What Are We Buying?

Good question. Looking at what people are brewing with and which cards I think are inclined to be good in the deck, I have a few picks I think are good buys. 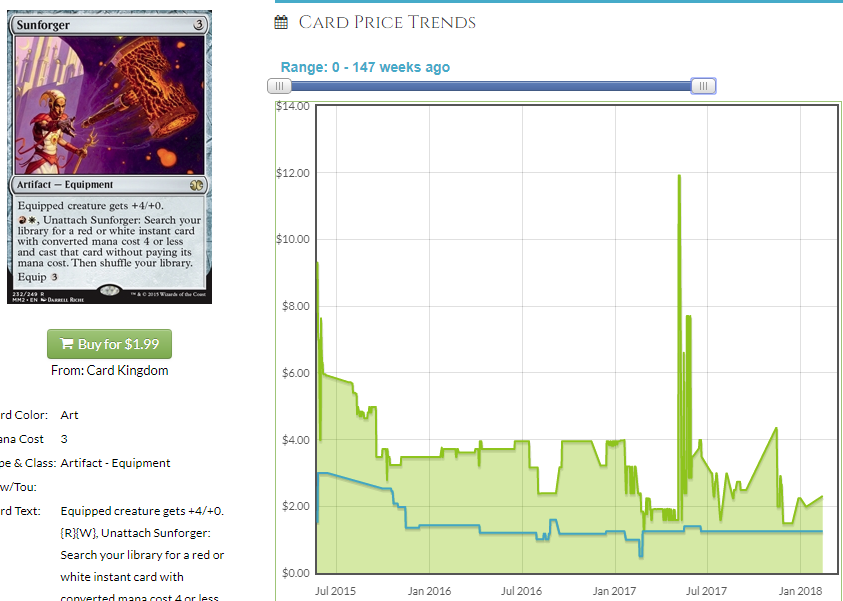 From the dizzying highs of Tiny Leaders hype (remember that adorable time in Magic’s History?) to the crushing depths of two reprints within 2 months, Sunforger has been through a lot. Probably a bulk rare forever or at least for a long time due to how many copies are recent, available and unclaimed, I think there is still money to be made on the Modern Masters foils. They’re only a couple of bucks but there were fewer foil printings than non-foil printings and I think the lower supply is more susceptible to increased demand. Sunforger fetches a ton of good cards in this deck and being able to suit up something with lifelink to swing at them and then Lightning Helix them right after or other crap like that is what is going to make this deck fun to play. Sunforger packages are common in Boros and I don’t forsee another reprint for a good long while. Foils are flat and when the demand profile changes, that will change. 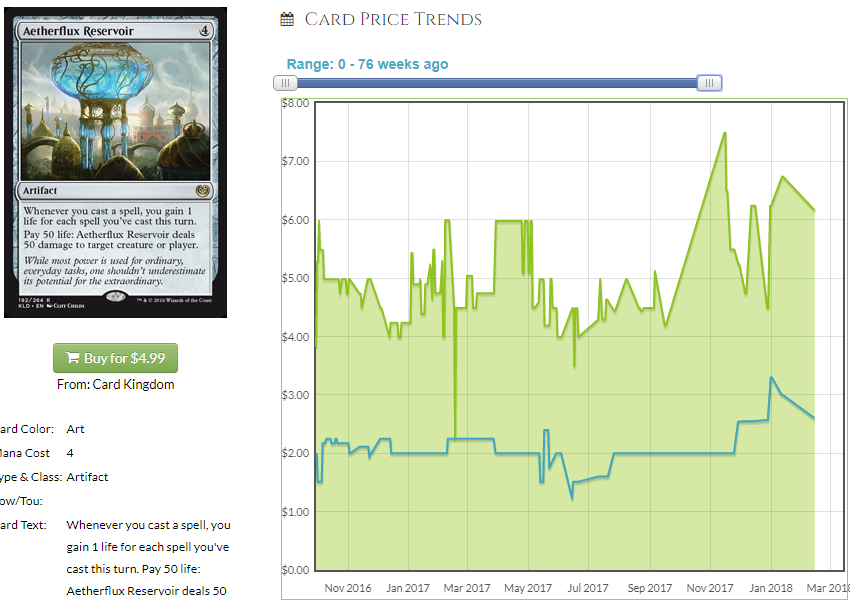 A feature of foil cards that isn’t discussed all that often is that a high foil multiplier usually only works in one direction. A low one doesn’t but a high one tends to. A high foil multiplier gets higher as the non-foil price dips at rotation and the foil doesn’t. This is usually because a high foil multiplier while a card is still legal in standard indicates that the card is played primarily in a format that isn’t standard which means that people aren’t dumping their valuable foils at rotation because they’re in decks. You don’t have to worry about what’s going to happen at rotation and you can pretty comfortably buy foil copies this close to rotation. If it does dip at rotation by a lot, just buy the same amount again and mitigate how much you lost. All of the copies will go back up and your average price paid will be lower which makes your gains even better. This is an EDH staple and as boring as it is sometimes, don’t expect EDH decks that are capable of gaining a lot of life to go away anytime soon. I like foils of this. At rotation, non-foils will probably be bulk rares and I think it might be fun to pick up one or two hundred at bulk and sit on them to see if they hit $3 before they get reprinted. 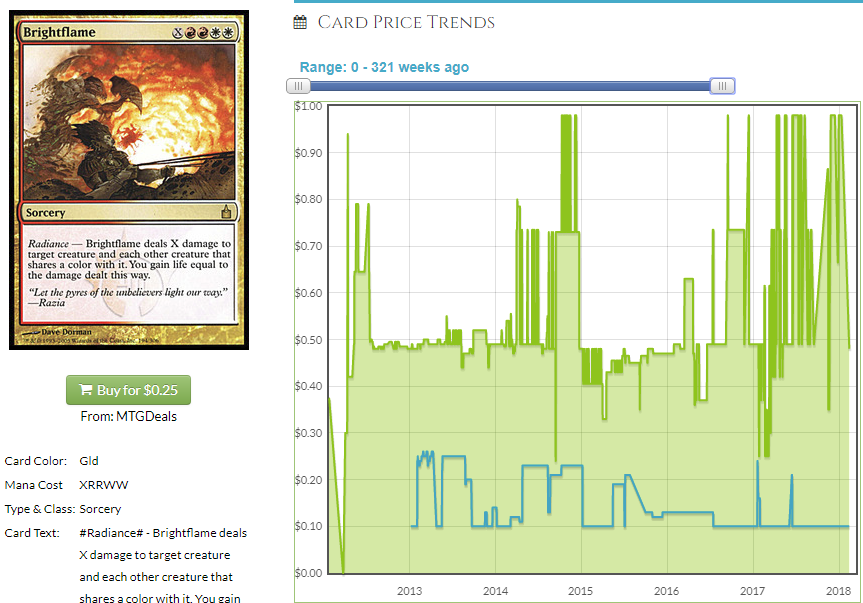 What’s the ceiling on a Ravnica rare with no reprints? $100? This won’t be $100, but I think it can go up quite a bit based on the difference between its current demand profile (362 decks on EDHREC) and its future demand profile (more than that, I bet) due to how quickly the very few copies listed online will sell out. Can one commander supply enough demand to make a bulk rare go nuts unless it’s Atraxa-tier good? Maybe, maybe not. But we saw what The Gitrog Monster did to Squandered Resources and I think hitting $10 and settling at $5 is the dream but isn’t THAT unreasonable even given the difference between the amount of Mirage block and Ravnica block out there. This should stop being bulk given how good it is in this deck. 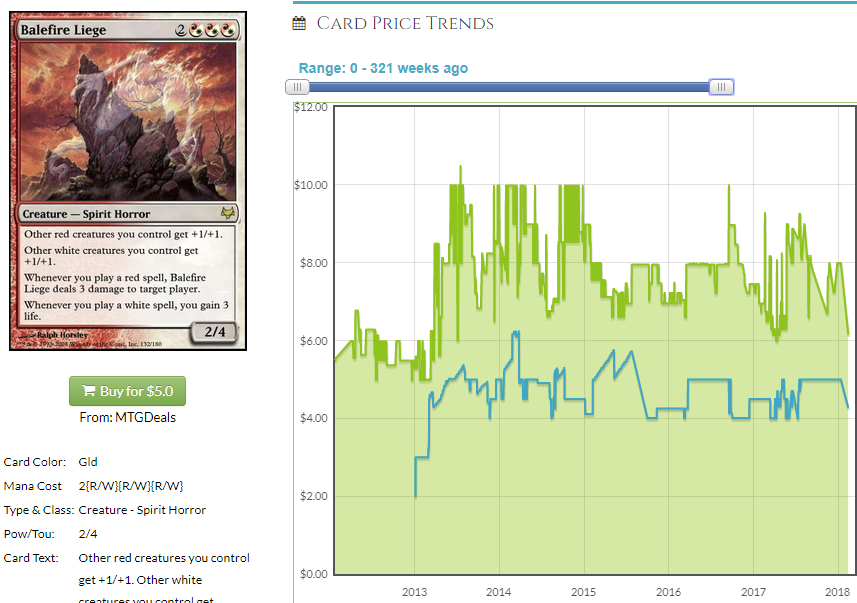 Balefire Liege won’t trigger your commander but it will trigger separately and get you some more reach, making it worth it to play with Lightning Helix in EDH, finally. This also triggers when you play creatures and enchantments so you’re going to be dangerous when any of your spells resolve. Wizards has shown a willingness to print these Lieges into the ground to get them into the hands of EDH players but for some reason, this one stopped being popular enough for them to bother and it hasn’t been reprinted since literally Planechase. That was a long time ago, so I think these are poised to go up based on any new demand, quite a bit should be coming from this deck which, I’m banking on getting built a lot. 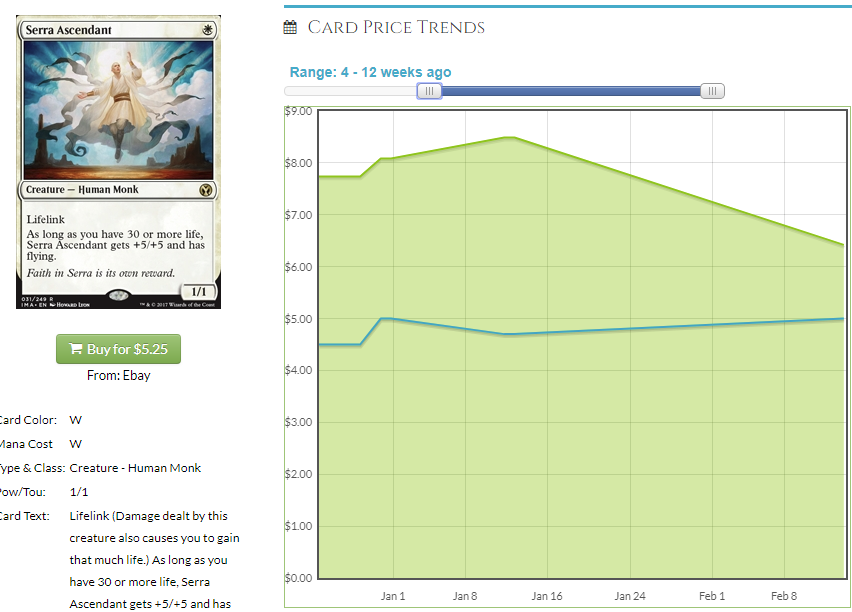 I think this is just about at its floor. It’s a good card, some players want four copies of this rather than 1 and it’s cheating in EDH. I think, like some of the other cards I mentioned being at their floor in Iconic Masters, now is the time to buy these regardless. Are these good in the spellcow deck? Certainly. But on top of that, they’re good, not likely to be reprinted soon and they have cross-format appeal. All of those factors added up and you have a card that’s going to go up no matter what happens. I even like the new art better, which is rare. 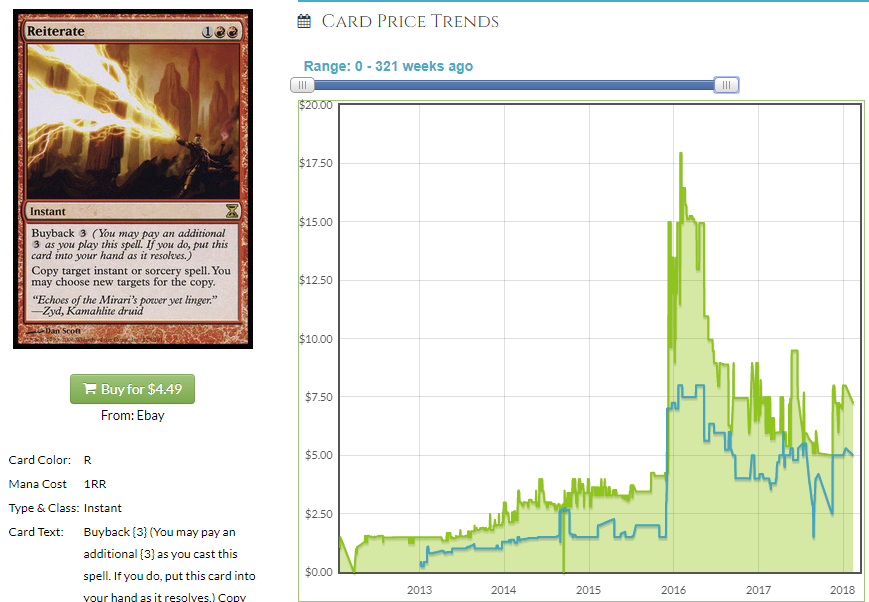 Mizzix hype spiked this card hard a few years back and the result of that is a price that’s stable for now but which can be easily upset by renewed demand. A second spike is going to spike harder and faster and stabilize higher. I don’t see a reprint coming soon so this is a pretty safe pick. I was going to do 5 this article instead of 6, but you figure out something I could have cut. This is all solid.

I like these picks a lot and I plan to keep googling “Firesong and Sunspeaker EDH” to see what other people are brewing. A lot of it’s garbage but the thing about garbage is you can still make a really tall stack of it. If enough people buy a bad, or obvious card, congratulations, the price went up and you made money. Probably the best aspect of Firesong and Sunspeaker and one I haven’t mentioned yet isn’t how exciting it is that Boros is finally getting a general that doesn’t suck, it’s that this deck, for as exciting as it looks, is probably going to be pretty linear. It’s really obvious how to build it and when that happens, you have a lot of people who want to build the deck vying for the same obvious cards, which is great for us. Get the obvious cards early, watch what people are brewing and note innovation and get ahead of that and remember that people being excited about something that doesn’t interest you can still be a money-making opportunity for you. That does it for me. Until next time!

One thought on “Unlocked Pro Trader: Taking the “Bore” out of Boros”