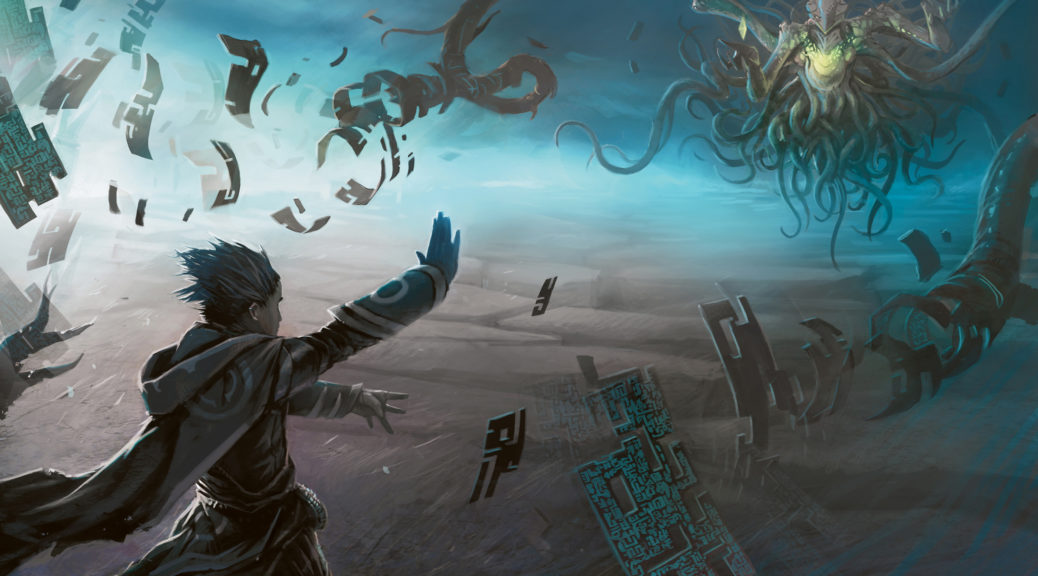 You can’t see this very well but it contains a pictographic representation of week one popularity of EDH archetypes based on data scraped by EDHREC. I predicted Muldrotha would be the most popular, Slimefoot would be second or third and Firesong and Sunspeaker would be second or third. I knew Jhoira would be Top 5, I expected Jodah to be Top 5. All of this is basically backed up by the fact that those are the commanders I wrote about. I would have covered Muldrotha but I was having a hard time finding anything actionable. Muldrotha seemed really good for making Lion’s Eye Diamond pretend go up (it was going up anyway) and it made Command Beacon spike right before it got a Judge foil printing but what else? Strip Mine? Believe me, I opened every individual Muldrotha list and dug deep, looking for cards with upside and it was tough. It’s half cards that have been printed into powder and half stuff that’s way expensive. I was going to cover Muldrotha today, finally, now that we have data because I was stumped before we had it. I thought maybe others had found something I hadn’t and I’d see that revealed today. Instead, I got a surprise that I think is more important to write about than Muldrotha. Did you spot it? I’ll zoom in. 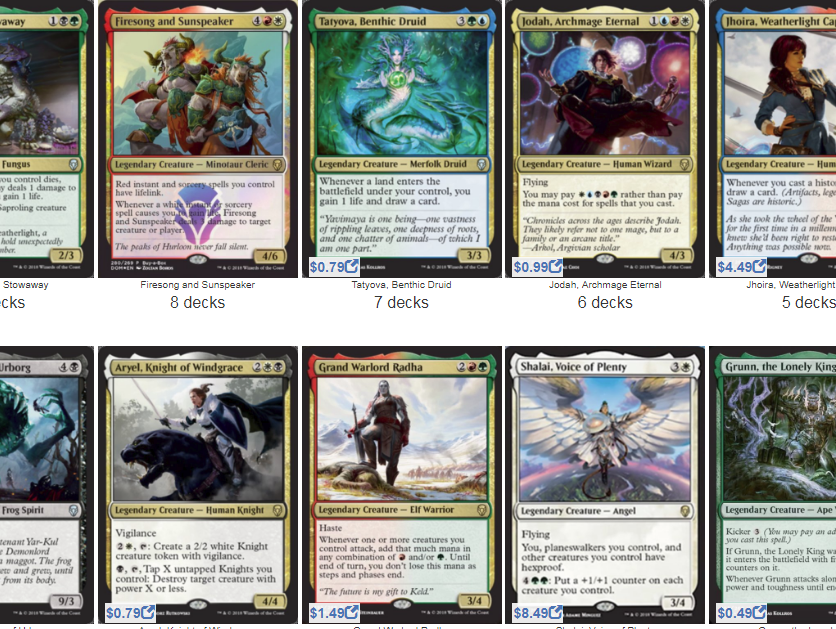 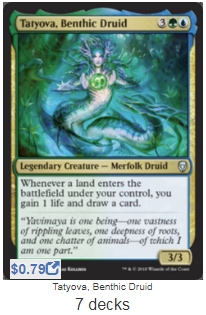 Did I overlook Tatyova because it’s uncommon rather than rare or mythic? Was it a lack of hype before the set? I don’t know what it was but while I expected this to be popular initially, I didn’t expect it to be Top 5. I expected Muldrotha, Firesong, Jhoira, Slimefoot, Jodah. A surprise is worth noting because since I wasn’t pre-preparing for this to be this popular and stocking up on goodies for it, it’s possible other people overlooked it and didn’t, either. While stupid cards like Elvish Farmer are popping off because they say Saproling on them (Saproling is the new Kitty-cat) and obvious trumps “We better wait for data, guys,” other people blowing their money on Elvish Farmer (and wisely investing it in Saproling Infestation – enjoy that quadruple up, readers) we’ll be snagging Tatyova staples while everyone else is distracted. This is why we wait for data! Crowd-sourcing our ideas  will always give us better outcomes and every collective brain of every Magic player, aggregated and analyzed is always better than one head, even if that one head is mine and EDH finance is all I think about. Some people think about EDH Finance to last longer in bed, I think about EDH Finance to wrap things up so I can get back to thinking about EDH Finance. Here’s what I think about Tatyova, the Russian-princess-sounding Merfolk Monster.

How To Ruin EDH

Sheldon wakes up with a pounding headache and stumbles into his bathroom. He opens his mouth and checks his teeth. Yep. Purple. He was into the red wine again last night. He checks his phone. 90 messages. He opens Twitter. “What did I do last night?” he thinks. Slowly, it dawns on him. Bottle after bottle of red wine. His EDH playgroup. An escalating game of Truth or Dare. “Dare” he remembers saying, then he remembers someone saying “I dare you to issue errata saying Tatyova has partner.” After that it got a little hazy but now every single deck being brewed is Tatyova and Thrasios. Thrasios has spiked to $200 and an angry mob is gathering outside his house. “I’m never mixing Commander and Cabernet again.”

How Do We Make Moneys?

Let’s look at this card again.

We develop our board as we were already going to do in Simic and we get to benefit every time we do? Great googily moogily. What doesn’t go in this deck? Here are the potential movers, as I see it.

Ghost Town seems like a pretty low-risk low-supply card that should be included in more decks. The EDHRECast podcast discussed this as an inclusion in Angry Omnath, a very popular deck, and they made a great point to what is currently a pretty limited audience. This card needs to get popular to get bought and that will have to happen organically. The simple fact is most people don’t know about Ghost Town and they should, but they don’t. This is an uncommon from Tempest, the ceiling for which is Reanimate’s $17. More likely, it ends up around $5 max if it does anything. We can compare this to something like Squandered Resources which was a rare, hit $15 and settled around $5. This isn’t rare and it’s not as obvious and splashy but this still does some work and in two popular decks now, and counting. Copies of Ghost Town are old enough to drink legally, so that could be a factor as well. I don’t think this goes down, but I don’t know what it would take to make it go up. TCG Player selling out couldn’t hurt, but I wouldn’t advocate that. This could be a 1-year hold but I think Tatyova and Omnath are enough to juice this to at least double. 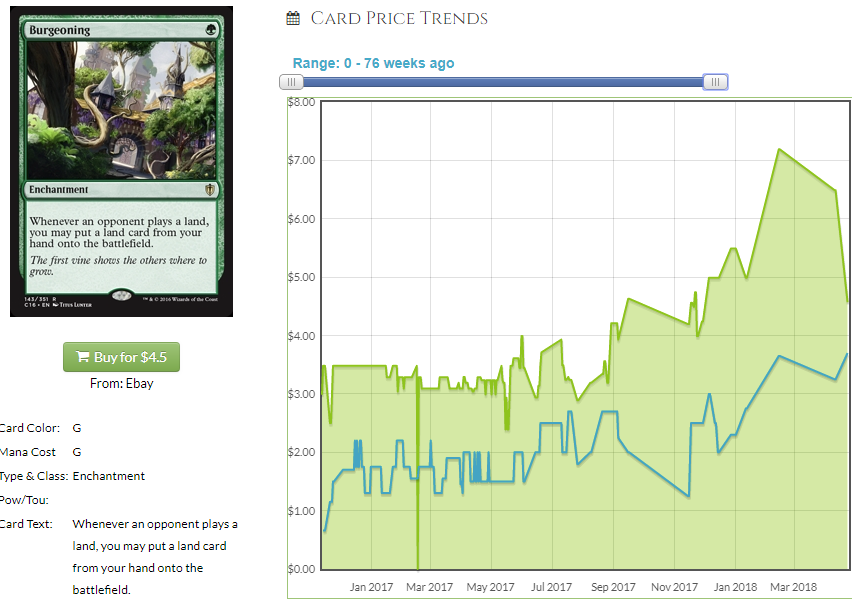 Burgeoning has managed to grow by 50% in the last year despite there not being any impetus on it besides just general EDH playablity. I don’t see another reprint coming soon – I think that will likely be reserved for Exploration with the MSRP of the Commander decks getting juiced by $5, hopefully to justify more valuable reprints in the decks. With Burgeoning likely safe to grow, I think the rate continues, probably at a higher slope given how insane Burgeoning is in the Tatyova deck. Dealer confidence is at an all-time high and that’s why I graph price with buylist price, always. See those prices converging? That means dealers think the current retail price is a fine buylist price. I really can’t imagine you can’t double $100 or so in under a year. This isn’t sexy but it does seem likely unless we get a third reprinting in as many years, which I’m betting against. Nothing is guaranteed, but I like my odds.

Patron of the Moon 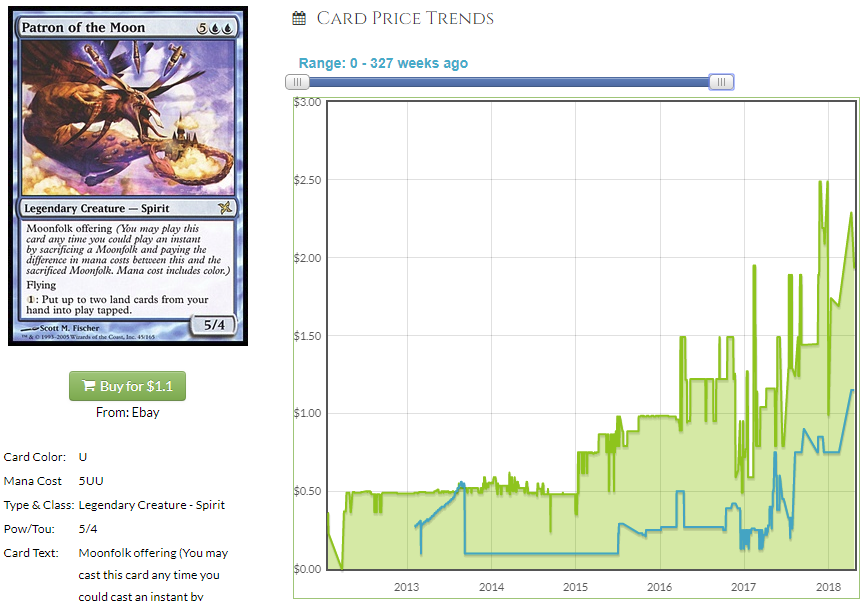 Patron of the Moon has been on a  tear for the better part of 3 years and none of that was due to this new card, at all. That’s encouraging. We’re 3 years farther away from this card having been printed, it’s expensive enough that people are grabbing these out of bulk and redeeming them for store credit or whatever people to do get $3 rares into the market and Tatyova is going to create even more demand for a card that can fart lands onto the battlefield. I like this as a “float mana, play Sunder, laugh” sort of play, and I think the Amulet of Vigor I held onto is on-board with that plan as well. 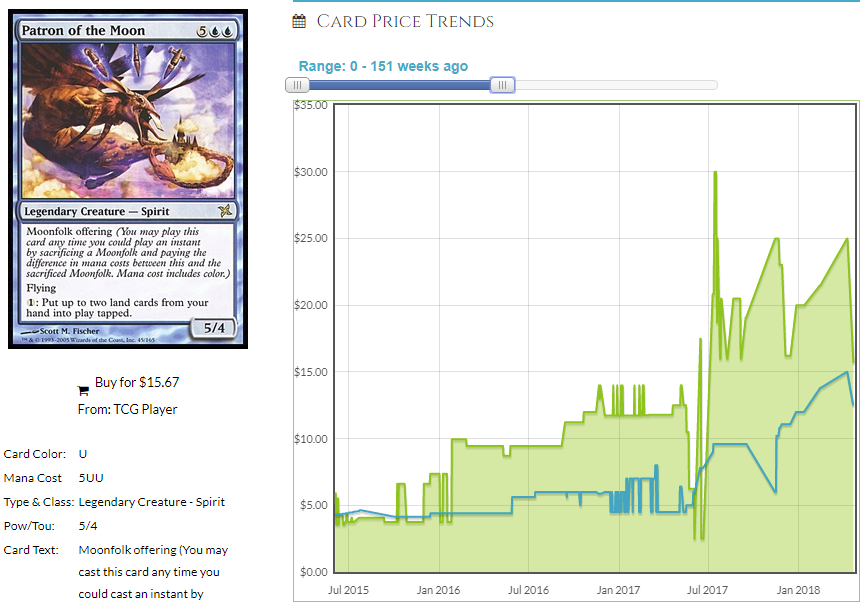 The foil already popped off but with the retail and buylist prices converging kind of like on the non-foil, this is in play too, it would seem. I’m not advocatin’, just sayin’. 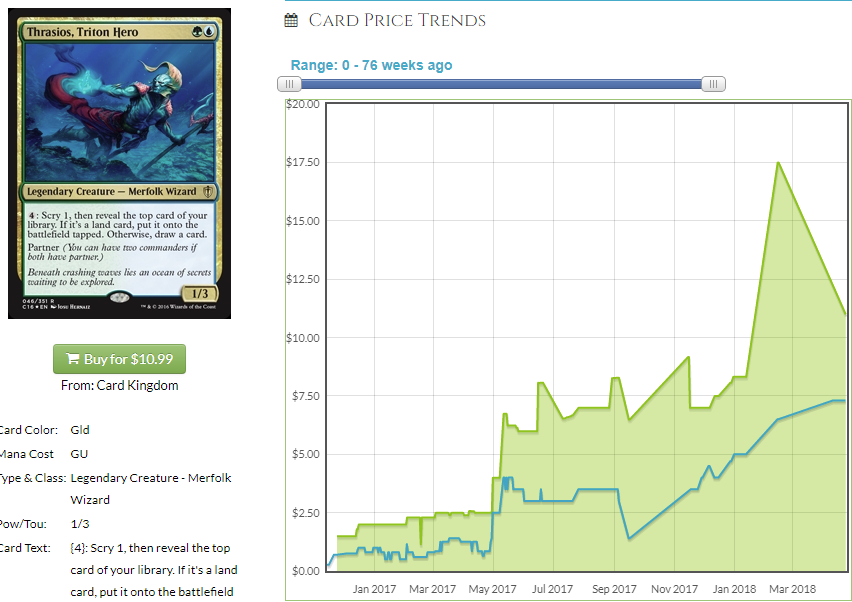 Absent a judge foil, I can’t figure out how to reprint this. That’s bad news given the somewhat low supply of Commander 2016 out there. It’s drying up and the stores that do have the Yidris deck still want $50 for it if they’re savvy so even copies in the wild are hard to come by. This card is bonkers partnered with just about anyone, it’s bannably-good in whatever nonsense competitive variants are out there and there’s no way current supply can keep up with current demand, let alone more demand with the printing of Tatyova. If we continue to see her be among the top few decks brewed our of Dominaria, which I expect, I think Thrasios will experience a profound price movement and people are going to be upset and they’re going to act like there was no warning. Poppycock. This is your warning. Thrasios is very likely going to jump up pretty hard and there are a lot of factors involved, not the least of which is a new commander which looks insanely fun to play. 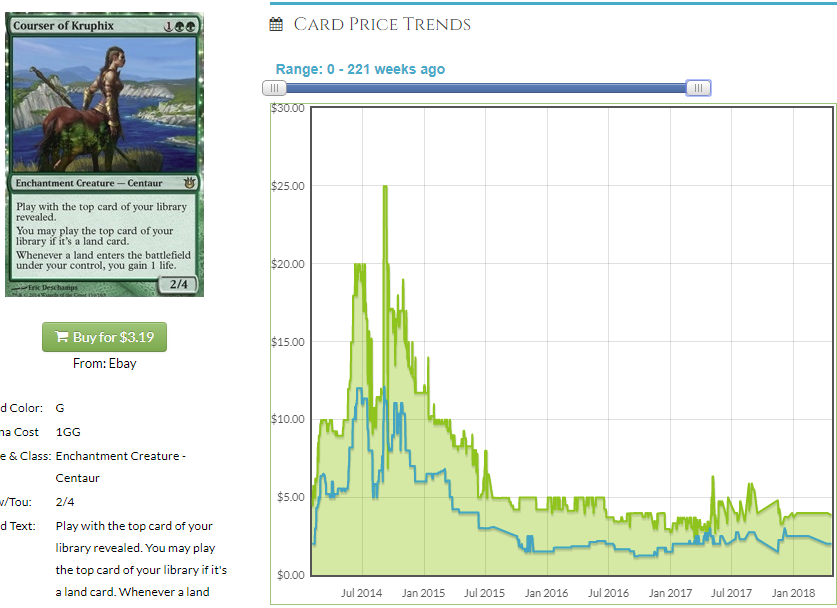 Had things been allowed to progress naturally, after the A25 reprint, Courser probably would have reversed course and added some value eventually. It probably wouldn’t have been done going down and if it ever flirted with like $1.50-$2, I would have snapped. However, the printing of Tatyova comes too soon on the heels of the reprint. I think we’re basically done seeing it go down. Do you like a $3.50 buy-in? I think it’s kind of gross, personally, and copies are everywhere, but this is going to be played in that deck, obviously, and you should at least get a personal copy, now. 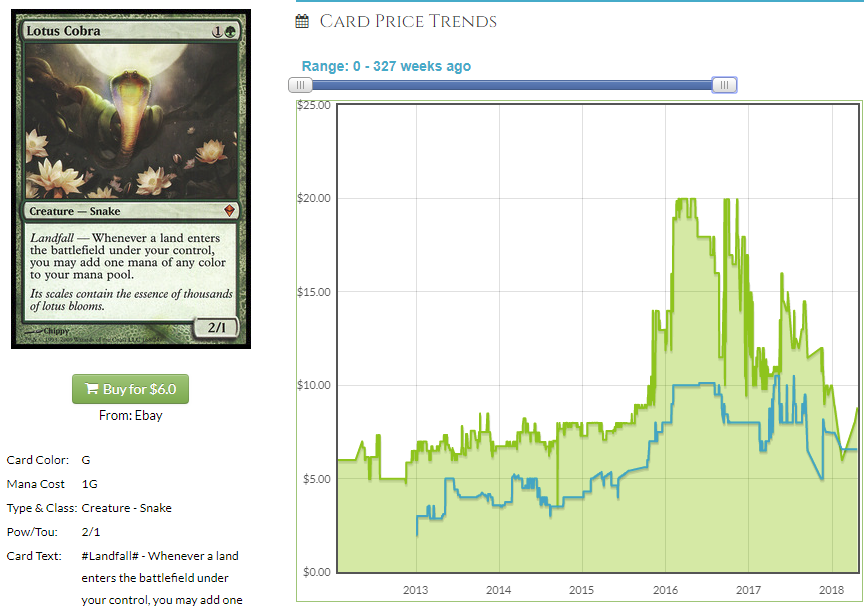 There’s a real incongruity that the market can’t figure out how to deal with, and that’s the fact that Lotus Cobra is stupid bonkers, has “Lotus” in the name and makes all of the mana as well as encourages you to play lands, which you will do and it can’t reconcile all that with the fact that we just got a bunch dumped in our laps with the Iconic Masters printing. I think Iconic Masters experienced a very small grace period and hit peak supply very quickly. No one wanted to draft it for $30 a pop. No one wants to pay $10 for a booster pack with Lord of the Pit as the rare. Iconic Masters cards are probably done tanking and I think Cobra recovers nicely, due in no small part to new EDH demand. This card is gettable for like $4 and you had a chance to arbitrage these stupid things a few weeks ago. Buy Inconic Masters stuff sooner rather than later, and get Cobra or I will.

That’s enough picks for you greedy little readers. Tatyova’s page on EDHREC is an interesting read and it doesn’t even incorporate dumb tech that the masses haven’t figure out yet like Scapeshift and Gilt-Leaf Archdruid. Can you imagine casting Urban Burgeoning with Tatoyva in play? Mercy. Anyway, I’m done for now. This was a good article and you’re going to make money if you take the advice from this article and you should share it with your friends who don’t normally read this article. Don’t worry about sharing the link with your Mom, she already reads my articles. Until next time!

2 thoughts on “Unlocked Pro Trader: Listen to the Data”