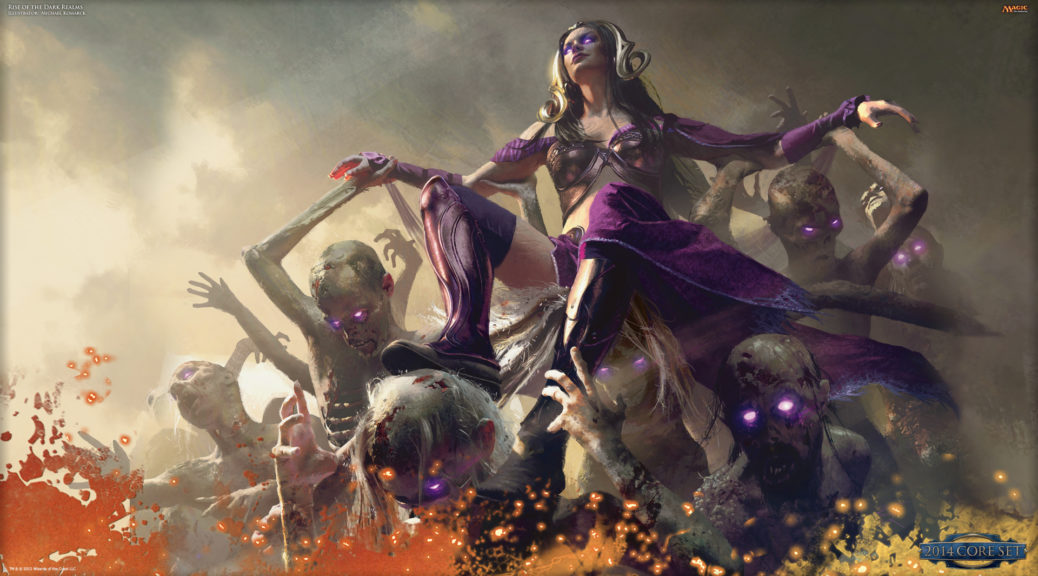 I mean, this is more like it. I still think Tatyova is the truth and I’m definitely brewing a Tatyova deck and I’m way more exicted about it than I am Jodah or Jhoira or even Muldrotha. If I do build another EDH deck from Dominaria, it will be Slimefoot which I think is interesting. The mythics and rares are powerful but kind of boring and the grindier uncommon generals are more appealing to me. Tatyova can get boring if you’re not careful since drawing massive amounts of cards tends to homogenize your game experience, but overall, I think the uncommons appeal to me more. That said, I’m not everyone and that’s fine. I don’t make money off of how I build, that loses me money, so I’m always way more interested in how other people are building.

Boring is Good. It’s the BEST (plus a tangent)

Boring is code for linear when I talk about EDH deckbuilding and linear means obvious usually. Muldrotha seems like it has infinite possibilities but you’ll find that there is quickly a consensus and with that comes predictability finance-wise. Once the combo with Command Beacon was discovered, people made Command Beacon cost as much as the deck it’s in, which has pushed the price of that deck to $55, which is still basically OK.

The cards over $5 are Ezuri, Eternal Witness, Arachnogenesis, Thought Vessel and Command Beacon. The cards that will be worth more soon than they are now are Bane of Progress, Verdant Confluence, Beastmaster Ascension, High Market, Chameleon Colossus and Skullwinder. I don’t think it’s worth paying $55, but if you do for that quick Beacon flip, hold onto some of the stuff that will get more expensive if you sit on it because it’s basically a free card. For reference, Wade into Battle is $115 and only has 2 cards over $5.

Where was I? Oh, right, linearity is boring and that’s why I threw a valuable tangent at you. I think I made my point and also probably made you some money. Would you rather I had kept talking about linearity for that whole paragraph? No, of course not, because deviating from a linear track is exciting. However, let’s talk about when linearity is a good thing, and that’s when it makes you as much money as a well-placed tangent.

Linearity leads to consensus and that leads to people vying for the same cards. If you have those cards, and they have to get them from you, you can charge more because there’s more demand. Simple. So while I want to build Tatyova, I sure want to know what Muldrotha players are going to buy. That’s why I was encouraged to see Jodah separate itself from Tatyova so much and the typical, get-built-every-week-regardless commanders like Atraxa and Edgar Markov enter the fray again. Last week we had “data” but this week, we have fewer surprises.  We want to be able to predict the future here, so let’s take a second to see if consensus is reflected in EDHREC data and if we can develop a metric, or even a vague “financier sense” based on % inclusion in decks.

My Financier Sense Is Tingling 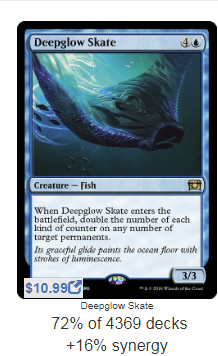 This is in a lot of Atraxa decks (the page from which I cribbed this image) and that is reflected in its price for a few reasons. First of all, it’s in a popular deck which means lots of people will play it which means lots of people will need to buy it which means it will be worth, say, $11. Secondly, it’s ONLY available in a popular deck which means the only loose copies came from people busting the Atraxa deck since 3 out of every 4 people who buy the Atraxa deck build it and keep Skate in it. 72% adoption is great and 16% synergy means it’s not exactly a format staple. Cyclonic Rift has 1% synergy with Atraxa decks because it’s a format staple. Birds of Paradise as a -6% synergy. How it’s calculated doesn’t matter – Atraxa doesn’t have a single card with a synergy score higher than 16%. Skate was made for this deck. Even Oath of Ajani and The Chain Veil have 10% and 7% respectively.

Unless a deck is popular and the card in question is only in that precon, a low synergy score combined with a high adoption rate means it’s a format staple. Something like this in a Atraxa deck, for example – 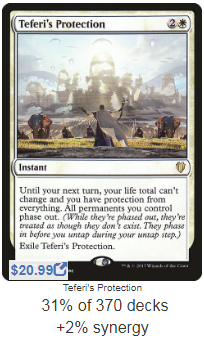 31% adoption isn’t super high but the 2% synergy shows that it’s a format staple and that’s good for its price. Teferi’s Protection has established itself and its place in the format over the last year, but what about brand new cards? Can we looks at cards in the few Jodah decks and glean anything from their adoption and synergy scores? Slimefoot we expect high adoption and high synergy – cards like Saproling Infestation will have high scores for both. Given Slimefoot has about as many decks built ever as Atraxa did this week, though, we can’t always tell ahead of time if narrow cards like that are great buys (though old ones like Saproling Infestation have already proven to be decent buys – thanks linearity!).

This isn’t necessarily a new metric to look at cards per se, but I think it may help us separate wheat from chaff a bit better than we had in the past. Cards with a small amount of data from the new set are suspect and this will help. 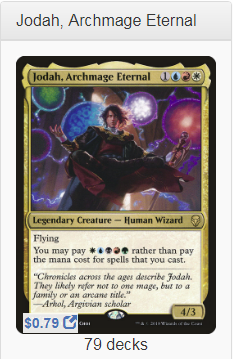 With fewer than 80 decks to look at, we have a small sample size, but % adoption should scale unless these particular 80 people are lunatics. Is these 80 are representative of Jodah builders as a whole, we’ll still see in the percentages what’s going to be a Jodah staple. I’m glad we brought up percentages before diving in. Here’s what I think will matter. 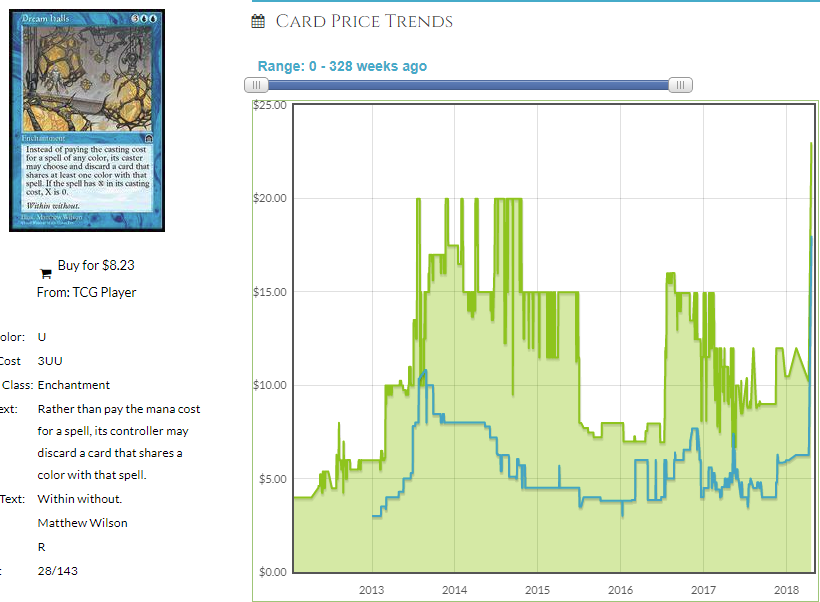 Conspicuously absent from Jodah decks seems to be this way in particular to cheat stuff into play. People seem happy with having to pay mana, which I don’t know I agree with. Dream Halls seems like a no-brainer to me and Muldrotha players are on-board but Jodah players don’t seem to think they need this card. The reason you play this is that you’re a 5-color deck and can pitch a lot of your multicolored spells you don’t need later in the game to play basically anything not an Eldrazi. This not helping with Eldrazi sucks, but you can do the trick where you pitch anything to cast Conflux and then fill your hand with goodies and use half of them to cast the rest or just have a full grip. That trick is better in Legacy when you have a really explosive 4th turn but that deck sucks.

Why am I bringing this card up that isn’t in enough Jodah decks to register? It’s played in Muldrotha, it’s on the Reserved List and it’s available for under $30 right now. If you think Jodah will ever play this, that’s even more demand for a low supply. I think Dream Halls is a $75 card when the dust settles. I think it’s about to pop and I think it’s good in this deck. 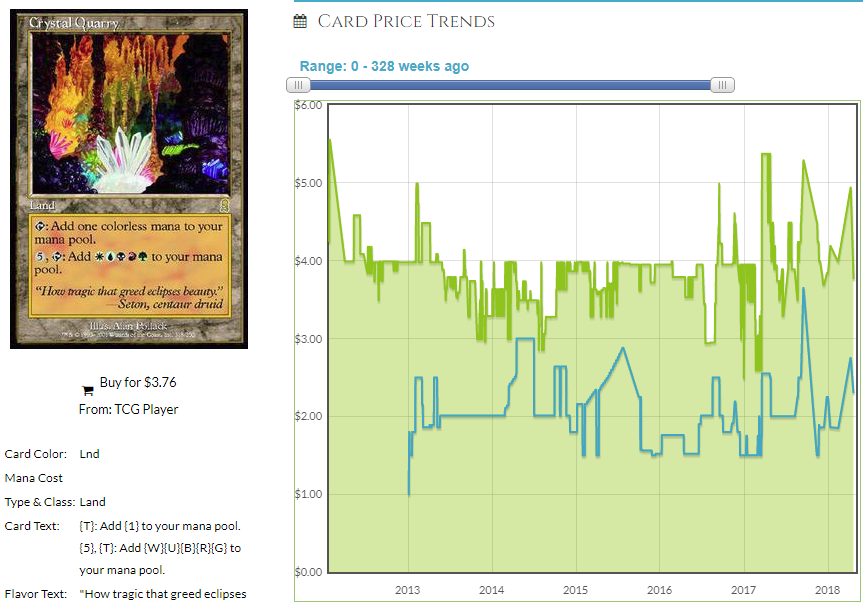 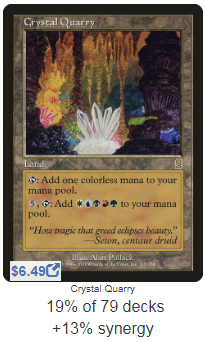 This article is turning into “Things I think Jodah decks should play” but at least this one showed up.  In every 5 new Jodah builders knows about this card. When Jodah was spoiled, I got multiple tweets asking if I thought Cascading Cataracts was going to go up. I mentioned this card and everyone asking me about Cataracts didn’t even know this card existed. I forget not everyone has played Magic since 1996. I used 4 copies of this in a mono-black deck to cast Last Stand – those were the days. I can’t find that deck anywhere and considering it has 4 of these, 4 Composite Golems and 4 Cabal Coffers, I hope it turns up in an old box somewhere.

Anyway, this article was supposed to be about what people were playing (Jodah) and not what I thought they should be playing (Tatyova) but this is literally a card not being played more because people building Jodah decks haven’t been playing Magic for long enough to know it exists. That’s ridiculous. 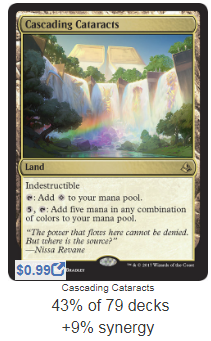 Over twice as many people are playing Cataracts. By the way? 43% is not correct, either. It should be 100%  for both cards. I think it will happen eventually. For reference, only 66% of the decks are running Sol Ring so something’s up and maybe 100% isn’t the goal. Still, once people figure out Crystal Quarry is a thing, why would you not run it in Jodah? What possible reason is there? People are asking about the finance potential of a bulk rare from a recent set that’s still in Standard and there are a trillion copies of and they don’t even know about a $4 card that there are like 12 of on the whole internet and one person could snatch up for like $200. OK, there are 83 listings for Crystal Quarry on TCG Player, but still, come on.  This is free money. Low supply, high potential synergy with Jodah and you have time to acquire copies before everyone figures out that the card hasn’t spiked already simply because the card is 17 years old and people literally don’t know it exists. These are like $4 some places. Just slam dunk this and when people somehow figure out what this card does, you should double up.

I write about this card like every week. Buy it.

Rise of the Dark Realms 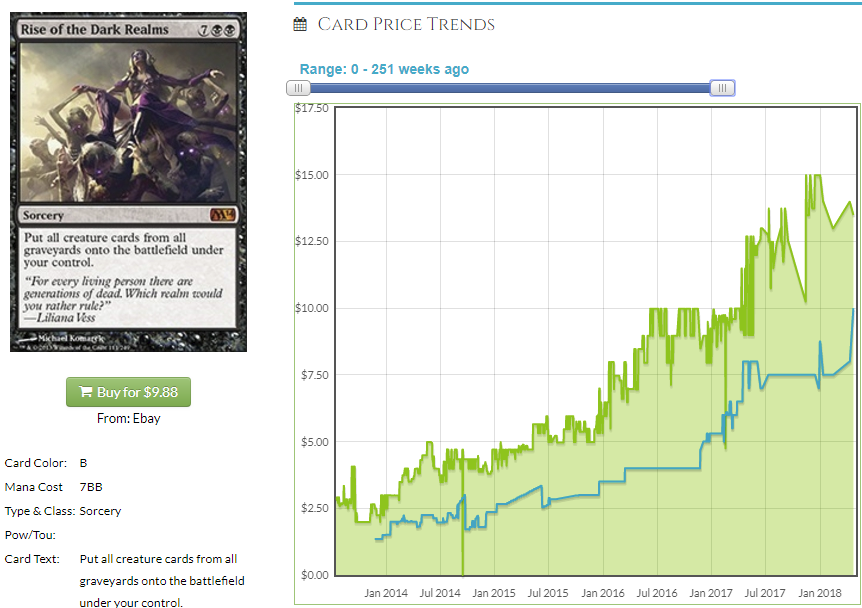 This goes up a couple of bucks every year. It needs to be reprinted, but a lot of things need to be reprinted. In the mean time, this is a sicko Jodah spell and if you can cast this for WUBRG on turn 5… congrats, you didn’t get any value. Seriously, I don’t know if it’s worth cheating this spell out, but… this spell is dumb and 16% of Jodah decks are running it. Not enough Jodah decks are running Insurrection but I said I would write about what people were playing not what they should be playing and this is turning into a maddening exercise for me. You know what has more than the 16% synergy ROTDR has? 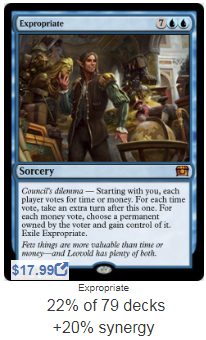 This might be an even better target and it’s less likely to get reprinted. It’s also expensive but it has a 20% synergy rating with Jodah so its fate could correlate directly with Jodah’s – it’s $18 on Card Kingdom with its current demand profile and any increase in that could increase the price.

Bringers were left out of a lot of “cheat this into play” decks because of their mana symbols and I think Bringers have a lot of upside. All of these creatures are worth cheating out and will get you a ton of advantage and I think basically anything with above a 25% adoption rate is what we now deem acceptable.

I don’t want to write anymore. I found you some good picks, we talked about a new way to look at EDHREC data and we had some laughs. That’s enough value for you, I hope. If you’re a Pro Trader, consider acting early on some of these tips even though the data hasn’t really fully materialized. Get the most out of that subscription. Anyway, that’s all for now. Until next time!