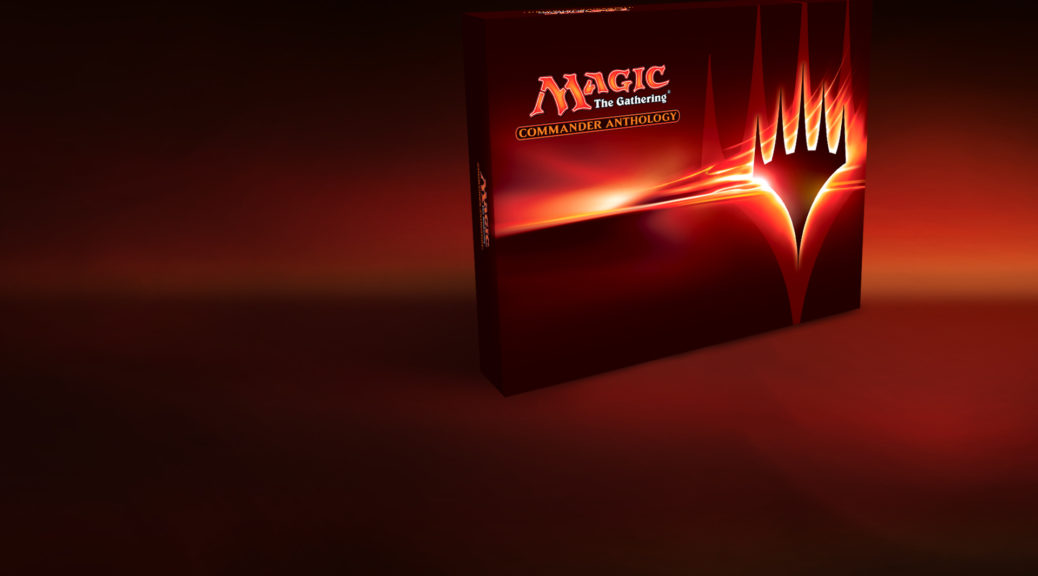 They’re doing a thing and that thing is going to do a thing.

If that makes you think I’m not excited about this thing, you’re right. It’s not for me and you’re not going to want to buy the thing. You are literally just going to wait and then get some free money because you knew what to do before it happened. That’s boring. Speculation is sexy and that’s what people want. They want you to see Helm of the Host and tell them to buy Combat Celebrant. They want you to assume that the post-Dominaria landscape will be slower and tell you that if you buy Search For Azcanta, you’ll make $3 per copy or just pull “I think Craterhoof Behemoth will go from $5 to $20” out of my ass the way I used to. None of that here, this week. This isn’t a sexy article fully of sexy speculation and what the hell, a pic of some sideboob. This isn’t me telling you which Reserved List card has like 10 copies left online and you can buy them and make the FOMO nutjobs take to reddit and complain about how the Reserved List is worse than Apartheid because they have to pay $8 for copies of Reparations. Go watch a YouTube video if you want advice like that. This is a boring article.

You know what’s boring? 90% of the money I make with Magic cards.

Get Ready To Snooze

I buy stuff for buylist prices locally, purchase collections and pick bulk. I put together instant collections, sell singles at a retail location and online and 5% of the time, I drop money on a speculation. The rest, I grind out boring, easy dollars by being willing to turn my time into money by doing boring work at home in my underwear while the television teaches my daughter to speak in a British accent (damn you, Peppa Pig).

This article isn’t about that, though, it’s about the other 5%. It’s the 5% where I do a thing methodically and collect free money. Opportunities don’t come up frequently, but when they do, it’s a good idea to pay attention. A thing is about to happen and when it does, we’ll scoop free money. Put on a pot of coffee, this is about to get straight coma-inducing.

They’re doing another Commander Anthology. It’s not a thing I want to buy at MSRP but it will likely make you like $20 after fees if you manage to have an out for the spindown life counters and the box. DJ Johnson loves to do shenanigans like that, especially since he can get the sets for cheaper due to an affiliation with a store. If you can’t, try combining eBay discounts and coupons and buying on a day where you get $15 off every $100. It’s free money. I personally think buying these is more boring than even I am willing to go, but there’s money in it and DJ likes it, so watch for a Brainstorm Brewery Brain Bite on Youtube about it from him if you want. I’m going to talk about the easier free money – the kind you make by letting everyone else buy the Anthology.

What I’m going to do today is look at how much cards go down based on Commander Anthology reprintings and how much we can expect to recoup by buying at the bottom and when that is. There should be money to be made. Let’s look at the last time.

The First Boring Time They Did The Boring Thing

Put on a pot of coffee, this isn’t the first time they did this which will make the results even more predictable. Last time they reprinted Kaalia, Derevi, Freyalise and Meren. Results were… mixed. 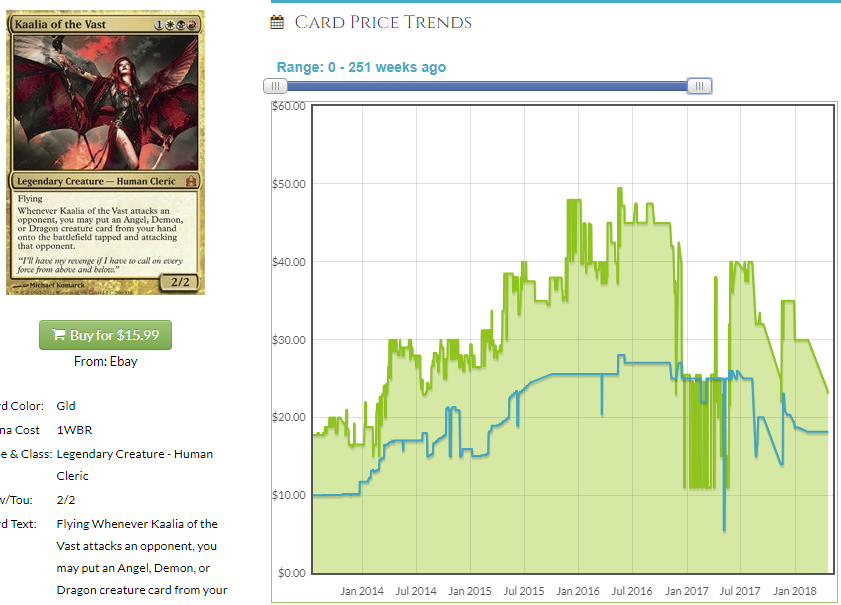 You can probably guess right around where Kaalia was announced and where she was reprinted. Unfortunately for Kaalia, this second reprinting (Commander’s Arsenal being the first) was the nail in her coffin and a year later, she’s still tanking. Dealer price is about to congregate with the retail price, which means a price update is coming and we could see the floor but the amount that the price fell doesn’t seem to match the amount it did fall. However, the value doesn’t need to be in this deck at all as it’s part of a 4-deck package and while Kaalia is holding steady at about $20, nothing else in the Kaalia deck recovered. Swiftfoot Boots and Sol Ring are the basically most valuable cards in the deck as cards like Manacharged Dragon and Angel of Despair tanked. One of the decks could be completely obliterated by this Commander Anthology and that’s not boring to know. The one bright spot in the deck was this. 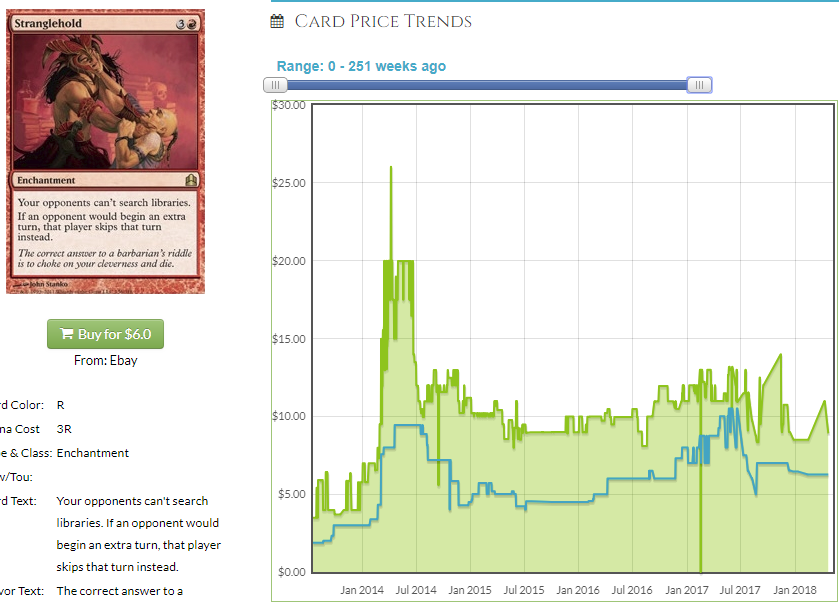 This held relatively steady because there wasn’t much of an impetus for it to tank a ton. We should avoid trying to buy cards whose only printings are a Commander deck from 2011 and a $165 set. It’s good to know that Stranglehold didn’t tank enough to buy in so we can avoid a similar card from the Mimeoplasm deck if one exists.

Kaalia was at least worth $20 because she is a popular Commander, but Derevi is down to around $1. Try and guess the most expensive card in the deck. Bet you can’t. 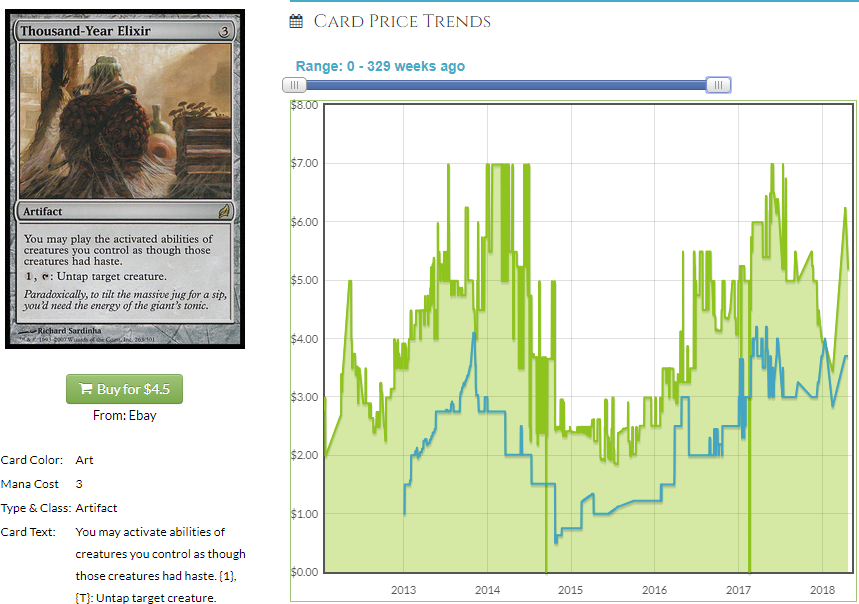 The price went UP when it came out in Commander Anthology because, I guess, people assumed it would be good with the Wizards decks they assumed they would be building with Commander 2017. Instead, we barely saw any attenuation in the growth of this card that I got in bulk when the Derevi deck first came out.  Odd news for the next-most-expensive card. 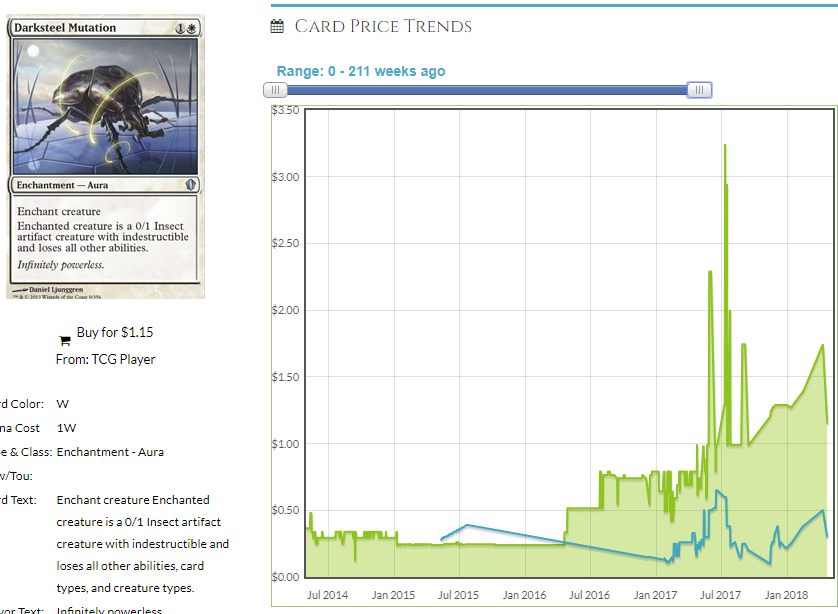 It doesn’t seem like the reprint really slowed this card down, much. A year on and the card has never been worth more, which is odd to say the least. We knew that the Commander Anthology wouldn’t give us too many copies of the cards and a card that was already in 3 Commander 2013 decks just didn’t get enough copies to touch demand;  Mutation is in 7,400 decks compared to just 4,400 for Stranglehold. While Commander 2013 was the first and last time this card was printed, it was in 3 times as many decks and that means there are a LOT of copies out there.

Everything else in Evasive Maneuvers is fairly well smashed, even Bane of Progress and Roon.

Not surprisingly, an Elf deck picks up a lot of the slack.

Freyalise herself is holding at $10, down from a peak of merely $13. The real impetus for the reprinting was all of the $5 elves.  Ezuri, Renegade Leader halved from $8 and its subsequent reprinting will seal its fate. There are buys I might look at. After all, Commander Anthology was a mere year ago so if there is no action to take right away we might chill for a year on Commander Anthology 2 and focus on what could rebound from the first one, still. 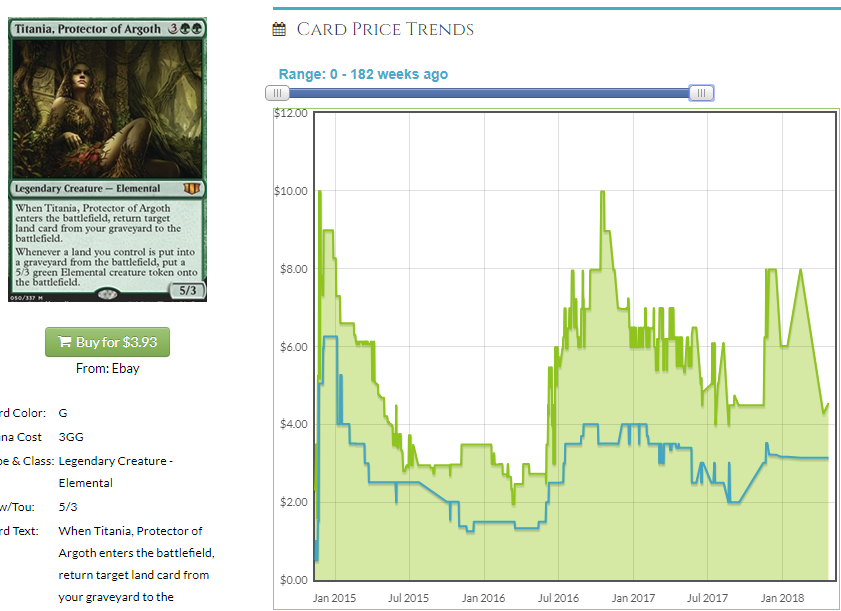 This fluctuates a bit but it’s near its historical bottom and it’s useful in Muldrotha and Tatyova which could be the upside it needs. 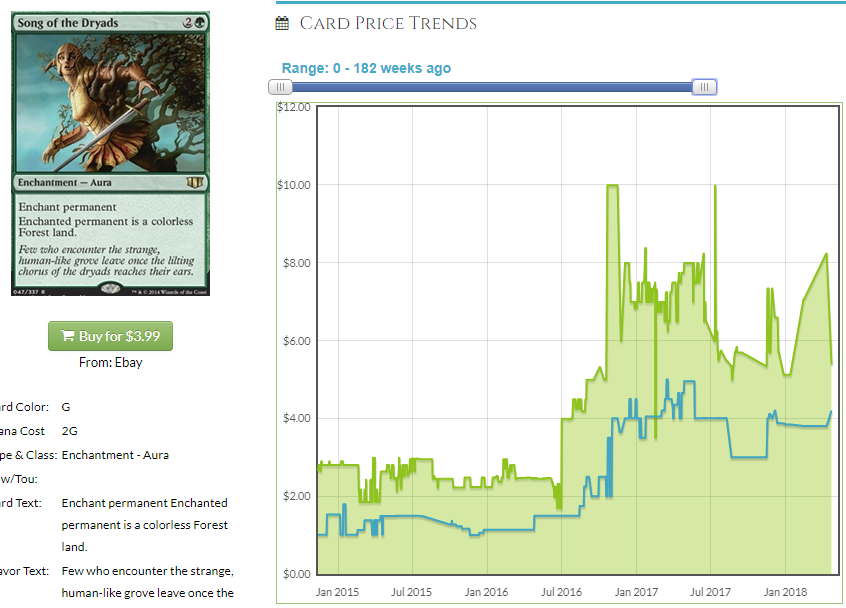 This set’s Stranglehold, Song of the Dryads, lost some value but seems to have mostly pulled out of its slide. Tcg Low is significantly lower than the other retail sites and the increasing  buylist price tells me a correction might be incoming.

Finally, we have Plunder the Graves. 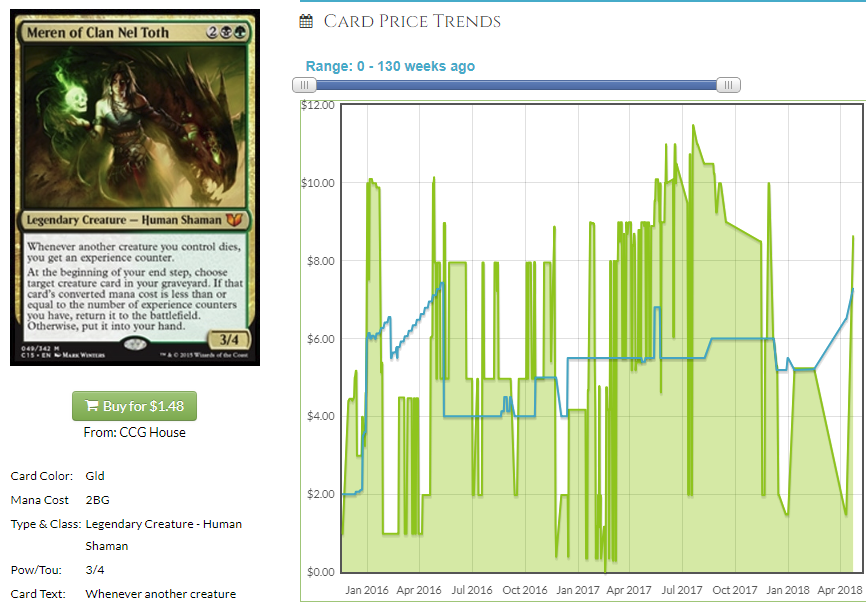 This is what happens when a small number of Merens are available online and every few weeks, the only copy we can find is the $1 oversized copy that CCG House has mislabeled in their system (or that we scraped erroneously – it’s a toss-up) so this data tells us nothing. Meren has been between $11 and $8 basically forever and the Anthology really didn’t change that.

Eldrazi Monument never really got above $10 so its drop to $8 wasn’t very signifnicant. Eternal Witness is one of the most expensive cards in the deck and no amount of reprints can really do much to attenuate that price. Though it adds up to about $75 retail, the contents of this 100 card deck are mostly worthless. Only 14 of the cards are worth more than $1, only 9 are worth more than $2. The value is spread out so the effect of the reprinting is spread out nice and wide. We’re not seeing that with this next batch of decks and we could get some things we’re not ready for.

What Was Once Boring is Boring Again

We’re seeing something quite similar with the value distribution in the sets about to be reprinted, and it’s going to be pretty boring. I don’t know if there is really much money to be made unless you can get the sets cheap and flip them. Let’s look at the numbers for the stuff that hasn’t been reprinted yet.

Remember, above we saw cards under like $2 never recovering and all of the stuff at or around $10 dropping to like $8 and a year later only starting to tick back up. $20 Kaalia fell off and hasn’t recovered but could. The only really interesting targets appear to be the $20 and up cards because I don’t know what they’ll do.

Devour for Power is worth about $50 more than Plunder the Graves, right off the bat and a lot of that value is in $5-$10 cards. If we only see modest reductions in the value of the cards, which I expect, some of it may recover. If the $3 cards don’t recover, the $7 only drop like a buck and recover if they’re in-demand like Thousand-Year Elixir or Eternal Witness and the $20 cards like Kaalia tank by about $5 and haven’t recovered in a year, you have to ask yourself – what’s going to happen with Commander Anthology 2? Here are my thoughts on every card above $5 from the 4 decks getting reprinted.

This reminds me of Titania. The Mimeoplasm is a decent commander and while it’s likely getting replaced by Muldrotha, it’s getting slotted into the 99 more often than it’s being replaced and sold on eBay. Muldrotha decks making it obsolete may actually be good for The Mimeoplasm.

Skullbriar likely dips and doesn’t recover that quickly. He’s a boring commander and he’s not good in anything else the way The Mimeoplasm is.

Stay away. This is in like 400 decks and while it may be a casual card, I think its price is predicated on scarcity rather than demand and loose copies will hurt the price.  I don’t know if this will recover in two years.

I don’t see this dropping much more than the other $10 cards this old. This is being replaced by Muldrotha and getting thrown away more so the price may go down if there is any new supply at all just because demand is also decreasing.

This goes up because it’s down due to Iconic Masters reprinting and it won’t likely be affected much by the Commander Anthology.

I think any additional supply will be a nice breather for the price but in two years it will go back up. If this drops by fewer than $2 I won’t be surprised. I don’t think there is money to be made on many of these cards since the prices don’t get that depressed.

That is all I have time for this week. Next week we’ll look at the other 3 decks and talk about if there is any money to be made here at all. Prices fell a lot less than I had expected last time so I don’t know, but we can still look ahead and we can certainly discuss strategies of how to maximize value by trading the right way with these cards. This is boring, but it won’t be if we find anything. Until next time!