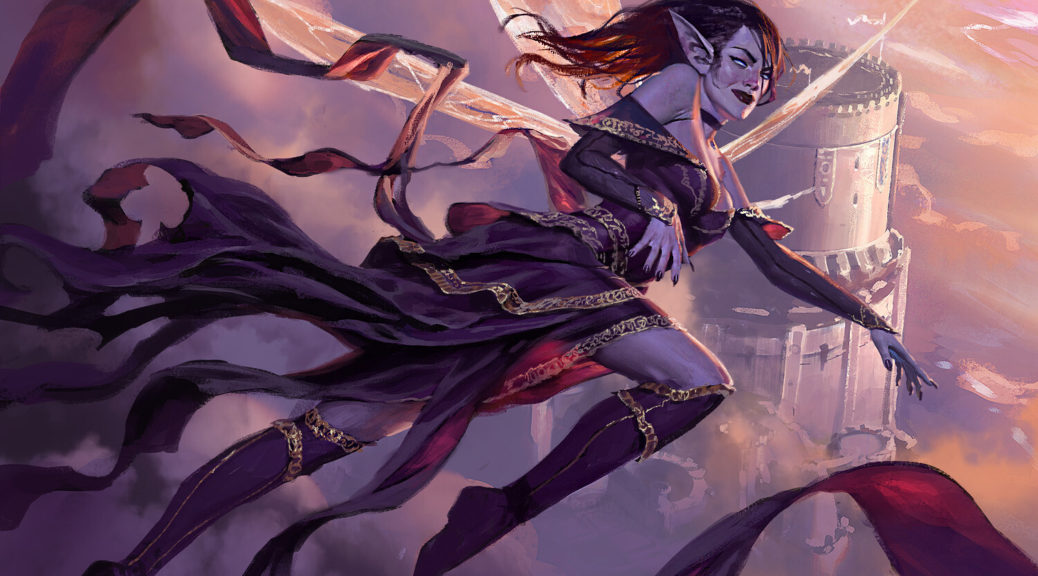 Last week we talked about how Alela was the top deck on EDHREC. Well, I checked today, and guess what happened?

Kenrith is creeping up and maybe we talk about that next week, but for this week, I noticed a few cards I wasn’t sure about last week are on the move and I’m going to talk about those before I get upset with myself.

Is it telling to anyone else that the Top 4 commanders right now are the 4 Brawl commanders? This format they’re trying to push has real consequences for EDH and Alela just might be good enough for Standard. No rants today, just value.

The price of the card on the right probably has consequences for the price of the card on the left. There is basically only one good card that isn’t a shockland in the set so a bulk rare like Biomancer’s Familiar could have long-term upside. There are a ton of loose copies and not enough pressure to make this a fast process and then there’s the matter of the high reprint risk. I think there SHOULD BE reprint risk for Training Grounds because letting it hit $25 was pretty negligent on Wizards’ behalf, but they’ve been letting a lot of stuff get stupid expensive. Biomancer’s Familiar is an OK budget Training Grounds but both have upside, however limited.

This card is stupid expensive. It’s very, very good but a lot of that price is scarcity. Speaking of which, you know what isn’t scarce?

This card is underpriced at a buck and I want basically every copy I can lay hands on. I don’t think its reprint risk is all that high per se and I think some of the $7 cards in Throne will tank leaving room for this card’s price to move up, but that paradigm may be shifting given the absence of MODO redemption as a factor that enforces box prices. Sets come out so often that box prices don’t go up because people only buy boxes for about 3 months before the next set full of insane cards that are a mistake and ruin multiple formats comes out. Modern Horizons made Modern, Legacy, Pauper and Vintage unfun – how long until they do another set like that? Will anyone care about Throne of Eldraine boxes in 4 months when their next mistake set comes out? Better just snag these while you can.

Also, there are 5 different versions (FIVE!) of Throne of Eldraine cards, so no one knows what to charge for foils given the extended art versions. It’s weird out here. I think Faeburrow Elder has applicability in multiple formats and this card is going to take off soon and everyone will act surprised.

Anyway, enough of Kenrith, here are some quick hits based on a second look at Alela.

TCG Player is the last to know here, but this card is selling out everywhere. It isn’t hard to see why – it’s old, it only has 2 printings (I don’t count that HIDEOUS Masterpiece) and it’s bonkers in Alela and in other go-wide decks that involve Blue. Opposition isn’t in a ton of Alela decks on EDHREC but there are more Alela decks with Opposition in them (25) than there were Yorvo or Linden decks built total, so that’s a thing. Opposition is gettable for the “old” price on a few sites like Strike Zone.

TCG Player prices are a little stickier because we scrape their market price which is based on last sold price. They haven’t started moving at the new price because there are still copies at the old price to buy up, and that will persist for a while because there are MP copies, people that charge like $2.50 for shipping and only have one copy of the card, foreign versions and all sorts of impediments to the card selling out completely. Since TCG Player is so tough to buy out and everyone uses their app, people will still think Opposition is $4 for a week or two after every other site lists it for $10 if that’s what happens. You have time, but not much.

And it’s not done, either. Check your bulk rares!

Every time they print a commander that makes small-ish tokens from now on, another deck needs this card. It’s tailing off a bit from its last spike but this is a $5 card if it’s not reprinted, and given that it’s a set-specific, Legendary artifact, I’m not sure how likely that is. Check out this metric while we’re looking at metrics.

There are only 2 non-land cards from Amonkhet, an insanely powerful set, that get more play per EDHREC than Throne. One of them is Pull from Tomorrow and the other is Anointed Procession. Throne doesn’t know it’s a $5 card yet, but it is.

As long as we’re doing that, check out cha boy, Revel in Riches.

As far as I am concerned, the underlying metrics are better and the reprint risk is lower for Revel in Riches compared to Throne of the God-Pharaoh and I LIKE Throne as a spec. Revel is rough to reprint in an EDH precon because it wins the game and they won’t put that in a precon. It’s no unreprintable, but it will be tough. I think Revel is a slam-dunk and I’m glad the price is down because it WILL go back up and now we can get them cheaper.

That’s all I have for you today. I think these Brawl precons will have a big impact on EDH and EDH prices and I think Arcane Signet was a huge mistake. Sell your Felwar Stones if anyone is still buying, I guess. Until next time!