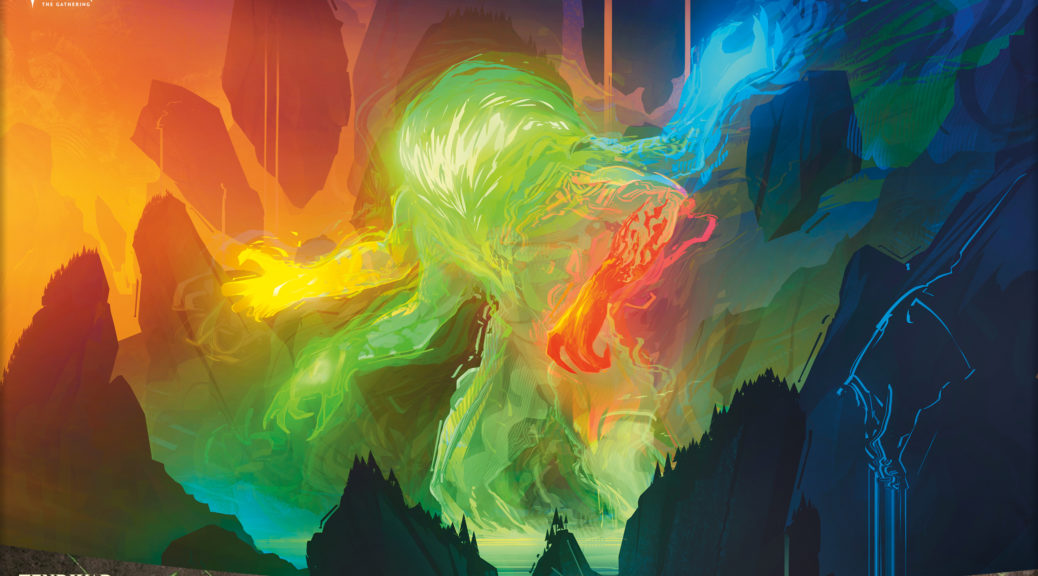 After playing some games of Magic: the Gathering with the cards from Return to Return to Zendikar, I have to say, the DFCs are much better than I had anticipated. I liked a few of them – namely cards that were just fine as cards and where the ability to flip them over and play them as the card on the back was gravy. Valakut Awakening needn’t be a DFC to get play, for example.

A personal Wheel that gets played at Instant speed, doesn’t require you to Discard cards, doesn’t require you to wheel your entire hand and which doesn’t net you -1 card is frankly pretty absurd. Do you NEED the ability on the back? Certainly not, not. However, it’s there should you need it, mitigating mana screw, ensuring you ramp up, and saving you from discard effects if you’re playing a card like Meloku that lets you pick a land up and put it back in your hand to be played as a Wheel later. It was obvious to a lot of people that this was good, and it’s currently the #5 played DFC per EDHREC, the first that doesn’t have a land on both sides.

It’s becoming clear the more I play that the DFCs are much better than just “good spell plus gravy” and players are playing the DFC lands a lot more than we’d anticipated. I want to look at each one and talk about whether or not it could get more play and, given how there is basically a 0% chance they’re ever reprinted outside of a very specific supplemental set, which ones could potentially be worth more later than they are right now. Let’s make a boring chart, first.

I sorted by Percentage of decks the way EDHREC does, but either way, the cards that are overperforming relative to their rarity will be obvious so how you sort doesn’t matter a ton. You notice what I notice right off the bat?

Recovery is performing better than a lot of rares and all of the Mythics. The 1 mana more than Regrowth is trivial in EDH and being able to play a land on the back is just gravy. This is exactly the card Recollect with upside.

Recollect sees a non-zero amount of play. Granted, quite a bit of that has to do with players just having a bulk uncommon lying around and Regrowth costing more until recently. There’s no real reason other than “I grabbed what I had on my desk” for not playing Bala Ged Recovery if you think Recollect is fine (it is. It’s fine). I don’t know if non-foils are a great investment, but I do think foils have some upside.

Under $3, I think foils of this are just fine. I don’t like foils, personally, but these are hard to reprint and I like that. Recovery is a good card and I think people are going to realize that more and more.

Basically anything we can say about Bala Ged Recovery, we can say about this except that there really isn’t an analogous card to this getting play. A novel spell with upside is very tempting. Black doesn’t get a ton of flicker effects and this takes some work but it saves a creature in a pinch. I am adding this to my Gonti deck, for one.

This is even cheaper but its future is a little less certain. However, despite a lack of an analogous card to compare it to, this is seeing quite a bit of play, it’s performing better than half of the mythics and a third of the rares and whenever you get an uncommon doing that well, it doesn’t hurt to look at foils. Under $2 this seems like a strong pickup and I could see this hitting $5 if it continues to see play. I think Bala Ged Recovery is much better but I think I can still recommend this as well.

I mentioned this at the top, but this card is very, very good. It’s not a strict replacement for a wheel all the time – it’s not good in Nekusar, for example. However, lots of Red players swear by Wheel of Fortune as a way to reload their hand even if it benefits opponents and this doesn’t do that. There are plenty of other wheels already in Nekusar, so why not give The Locust God a new toy that Boros decks can use to turn dead land drops late in the game into gas? This doesn’t play the same as Wheel but it doesn’t have to, it does quite a bit of work and people are on board, it seems. If Card Kingdom is getting $5 for this, you can confidently pay $3 on TCG Player imo, and when Card Kingdom is getting $8 for this, they’ll be paying $5.25 in store credit, but I would try to get out for cash. I think this is a good card and it’s going to get more play when people test it, not less.

Trade Routes is a card I have liked in landfall decks for some time, but it was always so cheap it didn’t seem worth mentioning. It spiked precipitously with the printing of Omnath, Locus of the Roil and is beginning to sell out at its “old Omnath” price because it’s also good in new Omnath but also it’s great at picking up a DFC land and letting you replay it as a spell if you want, or flip the mana it produces. If you can get these under $4 still, do so because this is on its way to $10 despite the large number of printings.

Meolku is another excellent way to pick up lands and give them another chance to be something different and it gives you some dorks, to boot. It had a Masters set printing, which hurts the insane foil multiplier, but setting this back to $1 so it could climb back up was a blessing. I wish I had snagged more when it bottomed out, but I had other fish to fry back then and I would have been sitting on them a long time. There’s still money to be made here, I guess, but I mostly included this to remind you to play it.

That does it for me, everyone. Next week we’ll have some more data to parse and soon we’ll get Commander Legends spoilers trickling in. Can’t stop, won’t stop! Join me next time for more hard-hitting analysis. Leave a comment in the comments section if you’d like to see the article I wrote about the Captain format and had to scrap 5 hours later. Until next time!