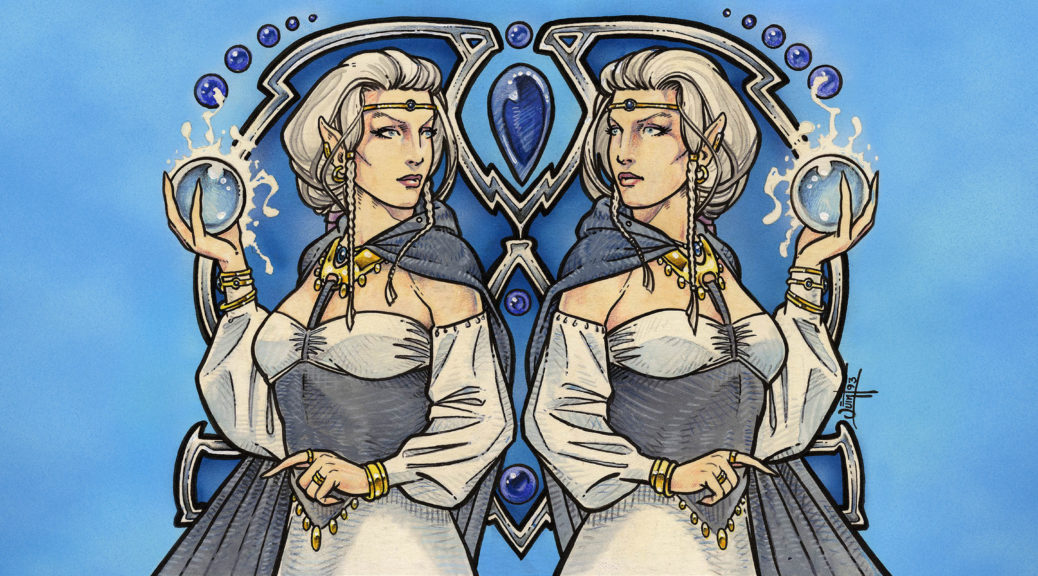 We talk about reprint risk a lot but today, I want to talk about the opposite of reprint risk and how a category of cards that keeps making itself obsolete is not only sheltered from reprints, but also benefits from the need to redundancy. Today, we study cards that beg for new and improved copies of themselves that are also cards that are new and improved copies of something else. That sentence will make sense later, I hope.

OK, so you know how one of the earliest things Blue knew how to do was pretend to be something else?

It was a good effect, and a very blue one. Being able to copy their best creature and thus neutralize it, copy your own best creature and thus double it and generally get a ton of value from a card that had a lot of utility in a color that wasn’t exactly known for having efficient creatures was popular early. Doppelganger and Clone both became popular cards and for years, Clone was reprinted into absolute oblivion. Doppelganger was left alone, mostly, but Clone lived on as the de facto, well, Clone effect. Eventually, WotC realized it was a fun design space and started sexying up the clones a bit with new effects, broader ranges of targets and better names than “Clone”.

The question is, if Clone had 0 reprints after, say, Unlimited, would its price be higher because of scarcity or lower due to being obsolete? I realize it’s an unfair question, but the question itself isn’t that important, it’s how I’m framing the rest of the article. We should be thinking about how a format like EDH with 100 cards that are 1-of effects is so profoundly different from a format with 60 cards that are 4-of effects that being “the best” Clone effect doesn’t matter, and being “the worst” doesn’t even matter some of the time. Sometimes you want to do your best Ash Ketchum impression and leave home 10 at to go engage in a bunch of what is basically legal dogfighting with no parental supervision catch ’em all.

Sakahsima is very popular right now and while there are a lot of decks pairing Sakashima with other creatures to amplify those effects (Krarkashima is blowing a lot of other decks completely out of the water, which has been a nice surprise and is why I didn’t try to guess which combinations would be the most played because I would have guessed wrong) people are also going mono-Blue Sakashima. Why? To load up on Clones, baby! And why not?

If you have enough clone effects, you can copy the same creature with a powerful (or hell, even a weak) ETB effect every turn and make opponents feel a sense of deja vu that ends with their death. It’s a silly deck but people like it and if people like it, they’re going to buy the cards.

If the deck needs basically all of the good clone effects, it doesn’t matter which is the best or worst, but merely how many the deck has room for. Since Clone effects, for whatever reason, are cards they’d rather redesign than reprint, the reprint risk on them is very low, making them appealing targets, and the fact that a deck can come along and make swaths of them relevant again all at once and could do so again in the future, makes them also appealing targets. Let’s look at the Sakashima page on the ‘Rec and try to find some good ‘uns.

The harder-to-get and less-printed ones have already begun to tip. The thing about Commander 2015 is that after everyone grabbed the one obvious card out of the deck, they sort of stopped caring about everything else and a lot of those cards started to pick up steam in EDH. Everyone was so focused on Containment Priest and Teferi that they didn’t realize that a lot of the decks have $3 cards in them. A lot of $3 cards. A lot of the Black deck has these 7 mana spells that most players didn’t even read that are pretty powerful effects in EDH. Gigantoplasm is still gettable for $2 on sites that didn’t get the memo and it’s unlikely the card ever gets printed again. It’s not flashy like Clever Impersonator, but there is something to be said for not being Clever Impersonator and therefore not getting reprinted. I like these at $2 and I don’t even hate them at $4.

So what will it take to push a card like Cryptoplasm out of bulk rare territory?

It seems like, with a similar amount of play for both cards, we’re waiting on supply to dry up. There are simply more copies of a bulk rare from a regular set than a card from a Commander deck. The demand for the Blue deck didn’t really materialize until it was far too late to print more – Teferi decks became a cEDH staple, Cyclonic Rift hit $20 and climbed more and we don’t need a third thing, two things is enough when those two things are the two things, but you were expecting a third thing.

So if Cryptoplasm doesn’t get there, are there cards that can?

Are we better off waiting for a card we know will recover to do that, buying when we know we’re at the absolute floor because the price has rebounded ever so slightly and the set it’s in was 10 products and 2 months ago?

Do we buy on the basis of a huge price disparity between two sites because we know that Card Kingdom slings a lot of EDH product, we’re not likely to get a reprint soon, the card sees play in a lot of formats because it’s not just a big, durdly, 4-mana clone?

Do we buy somewhere between the floor and ceiling because we know there are additional factors that make a card difficult (but not impossible) to reprint and we know once it goes out of print the price will go up?

It’s hard to know exactly what to do when we see data like this. Personally, I think if we were going to target a card like Gigantoplasm, the time to do so would have been before it started to get bought up a bit, buying in at the floor. A card that is a bad version of a good card and therefore obsolete can lay dormant for years, waiting for the deck to need enough redundant copies of the effect to spike it up and when that happens, the price spikes hard. You want to be the one selling into that first wave because a second spike isn’t guaranteed for a card with medium demand and 0 supply the way it is for a card with high, sustained demand and medium supply in two waves.

I don’t know if I like any of these Clones other than Gigantoplasm which appears to have some room to grow and some supply at the old price, Phantasmal Image which has grown a lot but isn’t done and Spark Double which has additional utility but less reprint risk. You don’t HAVE to target any of these, really. But what we can do is use this case as a lesson because while tribal cards are obvious when a new tribe is announced, you’re not always the one holding Louvisa Coldeyes, sometimes you’re the one trying to buy Bitterblossom because WotC announced a fairy tale set and you stopped listening when you heard the word “fairy.” “Clone tribal” turned out to be a thing, if you apply a very loose definition of what tribal decks are. But hear me out – the people applying the same loose definition of what cards should be grouped together in a deck the way players are going to are the ones who will be prepared for the next thing that is a little less obvious than “they spoiled a Minotaur, you know what to didgeridoo about it.” Until next time.