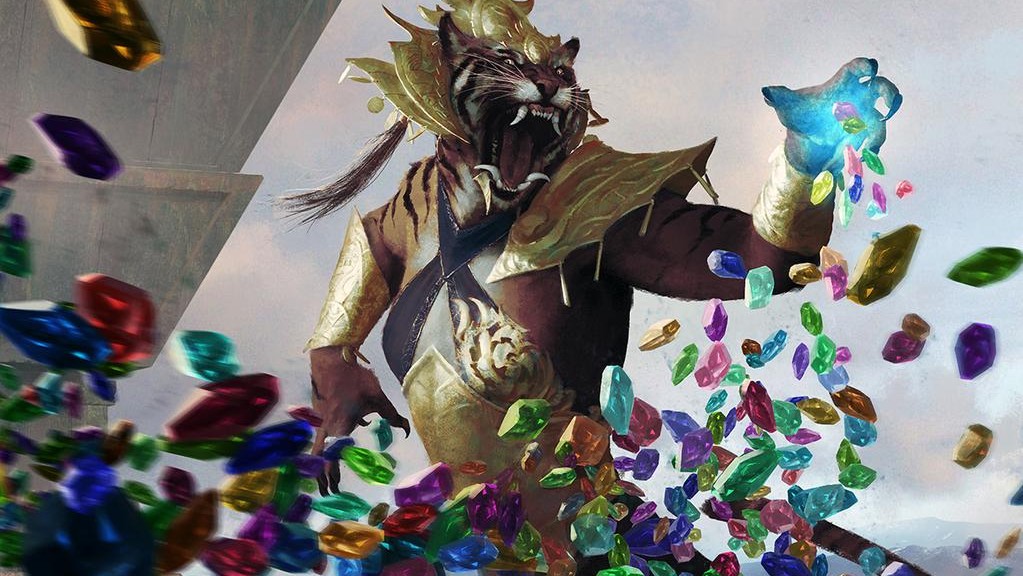 After Modern Masters hit the streets not quite two years ago, I started acquiring Modern cards as much as possible. Anything that wasn’t printed in MM was fair game, especially anything with keywords. Spellskite? Scoop ‘em up. Snapcasters. Fast lands. Goryo’s Vengeance. Various other cards that I don’t recall at this point. Suffice to say, I spent well over a year trading for as much Modern product as I could. With the format growing in popularity and the big reprint vehicle in the rear-view mirror, I wanted as much of my stock as possible to be Modern staples. And that’s what I did for months and months.

Not that long ago, my consideration of that format as an iron-clad storage chest for Magic value began to wane. Modern Masters 2015 had been announced, and the number of places reprints were popping up was beginning to outnumber the amount of cards needing reprints. We’re now firmly amidst a sea of reprint avenues, each representing a potential hemorrhaging of value. I’ve been forced to stop stockpiling generic Modern staples and instead have been driven to find greener pastures in which to park my Magic value.

Standard card prices rise quickly and fall off almost as fast. Changes occur on a weekly basis. The entire market is far more nimble and lean than Modern or Legacy. And while nothing is as safe and effortless as plenty of Modern cards are, there’s definite money to be made. I can’t park a few hundred bucks in Spellskites anymore, but as long as I’m paying attention, I can probably make more money. The trick is not to chase weekly tides. Rather, I want to look at long cycles, and get in while they’re at their floors. Today we’re going to talk about Khans of Tarkir, a set that is rapidly approaching its local value floor, and where to put your MTG funbux for the next six months.

If you read my article last week all about rotations and pricing trends, you would know that Khan’s price peak should be some time in mid to late October, and that its floor should be between July and August. As good financiers who pay attention to the details though, we may notice that Khans is a little different than other sets . Whereas most fall sets are drafted through the spring, KTK is not. Once Dragons of Tarkir hit the market, KTK packs left the drafting economy. Is this enough to impact the price behavior?

Let’s do some homework and find out. After all, perhaps the most important skill to cultivate in this field is doing your homework. In order to make wise decisions, you need to ask questions, and you need information to answer those questions. And no, bugging myself or Corbin or whomever on Twitter doesn’t count as doing your homework. Check price graphs. Find cards that are similar and note their behaviors. Look back through older sets for comparisons. Without all of this effort, you’re not doing anything other than making wild guesses.

Alright, aside aside, we know the last time a set behaved in this fashion was Innistrad back in 2011. Once Avacyn Restored hit, Innistrad and Dark Ascension dropped out of the draft. Here’s INN’s price graph.

Looks like the price floor is right where we expected it to be; between July and August. Excellent. Right now we’re six to twelve weeks from hitting the floor. How much further of a drop are we talking? Well, between today’s date in 2011 and the absolute floor that summer, Innistrad dropped about 18%. So we haven’t completely bottomed out yet, but we’re close. What we want to be doing now is identifying which cards we think will do the best through the fall rotation, and begin moving in on those. Starting now gives us a chance to decide our best course of action early, and time to start acquiring. Unless our plan is to just dump hundreds of dollars all at once on August 1, starting to trade today is a wise decision.

Today I’m going to start with Khans, and touch on Fate Reforged another week.

People have forgotten about Sarkhan, the Dragonspeaker by now, given Stormbreath Dragon and a general preponderance of dragons in Standard. It may feel surprising today, but there was a time when Sarkhan was being compared favorably to Stormbreath, and he had a price tag to match. 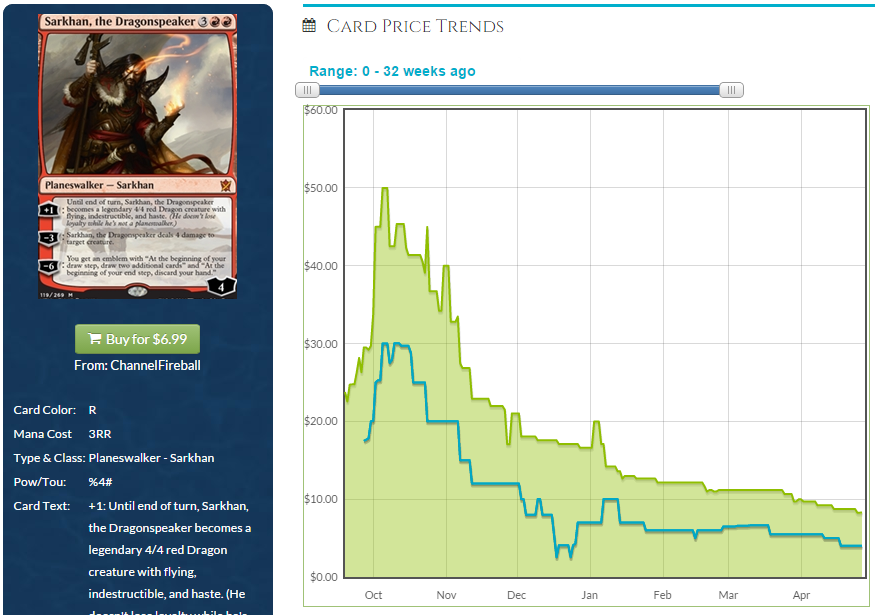 While I’m not holding my breath for $50 again anytime soon, I do think that $8 is much lower than he can and should be. Admit it, you probably thought he was $10 or $12, right? We’ve collectively forgotten about him, and subsequently didn’t realize how cheap he’s gotten. His power level is undeniable though. He’s a five mana hasty 4/4 indestructible flyer—immune to cards like Ultimate Price, mind you—that can alternatively come down and nuke a tapped Ojutai. He’s a premier planeswalker from Khans, and when the index jumps 80 percent this fall, he’s going to be a big part of it. At the very least, we should see a price of $10 to $12, and I wouldn’t be surprised to see him climb above $15 at some point in October. There’s few safer bets in KTK than Sarkhan.

Take everything I said about Sarkhan and apply it to Sorin, Solemn Visitor, only slightly less so. His price spiked less hard at release, only cresting $30, and he hasn’t fallen as far, with a current price tag of $10, but he’s still a powerful planeswalker that is trading well below his future value. What makes Sorin particularly good is that while Sarkhan is mostly sitting on the sidelines right now, Sorin is still getting in game wins here and there in various stripes of Abzan decks. We know beyond a doubt that Sorin is strong enough for a high-powered Standard format such as this, and when we suddenly lose half the available cards, his relative power level will spike. There are plenty of decks in the format where your opponent casting a Sorin and activating the first ability it is essentially game over. We even see Sorin pop up in Modern decks occasionally, which is a testament to his strength. I can’t get enough Sorins right now.

I’m struggling to reconcile Siege Rhino’s price with everything I know about Magic finance. We have a premier-level threat in two formats—Standard and Modern—and I can currently buy multiple playsets on TCGplayer for $4.25 a copy? What? Yes, it’s a fall set rare, and that means there is no shortage of copies on the market. But so what? Abrupt Decay was a fall set rare and was $10 while in Standard. In fact, it was in the same set as Deathrite Shaman, which was also at least $10. Oh, and both of those were also in the same set as shock lands.

My point is that while fall set rares tend to be suppressed, especially when good lands are in the set, I don’t believe that it’s enough to stop tier-one grade-S staples from hitting high prices. Nearly every year I’m impressed by how valuable some rare manages to be despite being a fall set rare. This year around that card is going to be Siege Rhino. I expect it will at least double to $10, and I think $15 is within the realm of possibility. We’re talking about what is arguably the best card in Standard and is also a full playset in one of the best Modern decks in the format. In fact, my goal between now and July is to sell some excess stock I have and buy up Rhinos in anticipation of this fall.

I was lukewarm on See the Unwritten when Khans was spoiled, but I didn’t know the next set was Battle for Zendikar, either. After BFZ was spoiled at PAX, Unwritten jumped from around $2 to around $6. It’s since pulled back towards $4, which is great for us: the lower the buy-in, the better. As soon as the first Eldrazi is spoiled, Unwritten is going to jump towards at least $8 as people get hyped to flip gigantic otherworldly monsters into play. Let me be clear here: Eldrazi don’t even need to be legal yet for this to double in price. At $3 or $4 in trade, this is a spec that will be profitable on hype alone.

If it’s actually good, we’ll see prices well into the double digits. See the Unwritten is a popular card across several demographics and formats, such as kitchen-table Magic and EDH, so any Standard demand whatsoever is going to push the price very hard. I’m in for seventy copies or so right now and I’ll be looking to expand that investment through trade binders this summer.

We’ve all come to take Sylvan Caryatid for granted. It’s been so long at this point it feels like a permanent fixture. She’s (they?) are on her way out though, and we’ll need something in her stead. Enter Rattleclaw Mystic. There’s really no other comparable mana fixer in Standard right now. It’s possible we get Birds of Paradise, which would be awesome, but I’m not holding my breath.

As a buy-a-box promo, we already know that Rattleclaw Mystic is slated to be a serious Standard contender, just as Sylvan Caryatid was. It plays extremely well with the Deathmist Raptor/Den Protector synergy that is likely to be the backbone of many Standard decks over the coming months, allowing them to splash into red or blue. Battle for Zendikar will have all sorts of cool things to ramp into. What’s not to like here?

While Wingmate Roc performed admirably earlier in the season, I’m not particularly excited about it this fall. Our embarrassment of riches in the DTK dragons is my primary reason for doubting the return of the bird. With so many powerful flying threats such as Ojutai and Atarka, it’s going to be tough to find a reason to play a card like Roc. Does this mean the card has no future whatsoever and is total bulk? No, absolutely not. It could very well come to transpire that Roc ends up being a relevant component of the metagame this fall and hits $10 again. I’m not writing this article to look for “maybes” though. While you could do worse than Roc, I’d much rather put my Magic dollars into what I feel are basically home runs, such as Siege Rhino and Sarkhan.

I’ve been hemming and hawing over what to do with Dig Through Time while writing this article, and I finally realized that my indecision is exactly my issue with the card. Could DTT hit $15? Aaaabsolutely. No question. Is it a 100 percent slam dunk the way I consider these other cards to be? Not at all. It’s banned in Modern, which cuts a big chunk of potential demand out from under it. It sees some light play in Legacy, but rarely as a full playset. Browsing the EDH stats over at MTGS, Dig Through Time isn’t even a top-50 blue card in the format.

Perhaps my biggest concern with Dig Through Time is that it’s already a $6 card. That’s a tough number to make profit on when we’re talking about a rare rather than a mythic. When Siege Rhinos are $4, Dig Through Times at $6 are simply less appealing to me.

I fully understand if some of you out there want to go deep because you expect DTT to hit $15 this fall. It’s definitely a possibility. It’s the strongest blue card draw spell we’ve seen in ages, and it’s clearly eternal playable. It comes down to a matter of opportunity cost. For every Dig Through Time you buy, it’s one-and-a-half fewer Siege Rhinos available to you. At the end of the day, I’m more comfortable with Rhinos than Digs, though I can respect those of you that opt to pick up copies.

What do you think about the opportunities out of Khans?