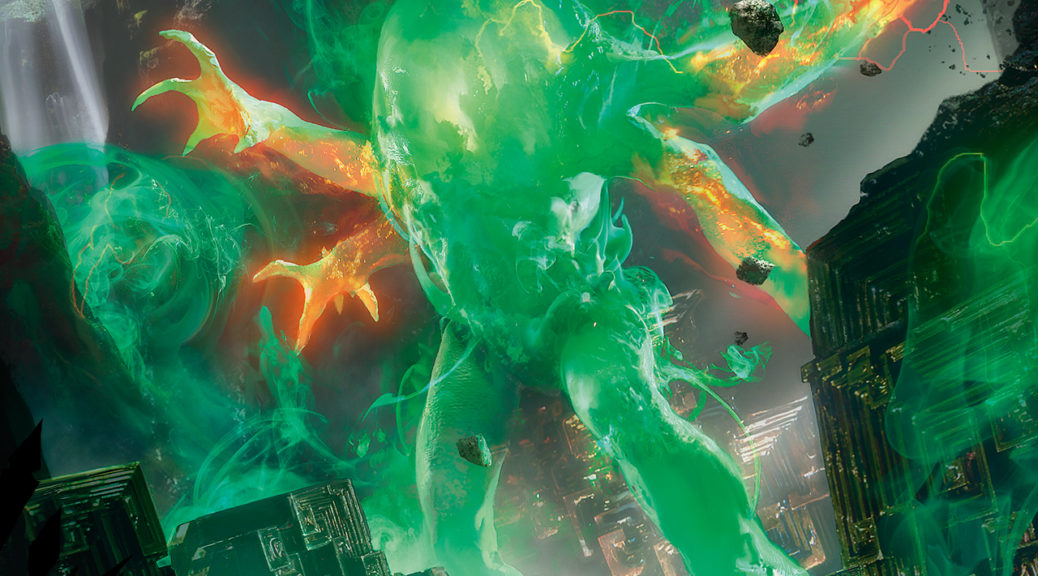 This meaning the information that leaked this week that seems fairly credible, coupled with what Maro said this week. If I can think of anything that could go up as a result, I’ll talk about it here. If you’re not happy with that, go buy basically anything on the Reserved List because enough people are doing it that it will probably work out. Who am I to judge people for doing literally the laziest thing possible?

I’m going to talk about the leaks first and then finish with Maro’s stuff. The leaks are less certain but Maro’s stuff is more vague. I can sense you pulling away. What would you have me talk about this week? Just go with it.

If this is all true, it could be pretty spectacular.

Lotus Cobra being reprinted would be sort of meh, the price wasn’t super high on it but when it bottoms out, it’s a buy-in opportunity. However, if Lotus Cobra is in the set, and it’s looking like it could be since this source is fairly credible, it confirms landfall as a mechanic. Any landfall enabler currently in an Omnath deck is in play. I suspect the new Omnath will be one of the more exciting decks to build since it will likely be 4 colors. Landfall has always been good and now we get to play with cards like Admonition Angel and Ruin Ghost, both of which I like at their current price.

Looks like Card Kingdom got the memo but other sites like CFB seem to be lagging behind a bit.

There were more of these and they were cheaper the first time I wrote about these but you can buy the last few copies under a buck. I think this is quite good in landfall decks and it goes infinite with Retreat to Coralhelm.

When people were playing Knightfall in Modern a million (or 4) years ago, this was the belle of the ball. Now it’s fallen significantly, but a card that flirted with $10 can get above it’s current “not even $2” can’t it? It’s good in landfall decks and we’re likely to get some of those.

Shadowborn Apostle seems like a trap. If it’s reprinted the price tanks and anyone buying Demons to pair with them doesn’t really understand how the deck works. You can look at how the deck is being built right now if you want but I don’t think it suddenly becomes hot again. I could be wrong, so by all means poke around the Athreos, Shirei and Razaketh (my preview card!) lists on EDHREC if you want. If you’re quick, you could end up being able to sell out to people having these same thoughts we’re having now but 2 weeks from now when something is confirmed and not holding the bag even if you’re wrong. You don’t have to be right all the time if you’re quick enough.

The Legendary Demon in the set could be a build-around or it could just make decks like Kaalia and Razaketh better. You could make money on Thrumming Stone again. I’m not personally trifling with any of it but there are plays here if you want.

I have made the mistake of thinking people were going to build tribal clerics but if the demon benefits from people saccing Clerics, they could be in play again. Edgewalker, Starlit Sanctum, all of it.

It’s sort of hard to tell if Apostle is being reprinted or if he’s speculating that they would be good in the set because of the Demon. I am not saying buy them in case they’re not reprinted, because I don’t think he’s saying that. If you had a card like the one he described, and you assumed it was Black, how would you build the deck? What if he was White and Black? I am not sure how tasty any of those pickups are and we’ll likely have some time. A demon like this seems more like a Vannifar than a Teysa, but I hope I’m wrong. I think we can safely wait and see what the deck looks like, but if you want to have the cards to sell to people when that happens, there’s a lot of info about this demon.

I kind of love that the new Avenger of Zendikar thing is Legendary since it will give me something good to write about on Coolstuff Inc. Do you see how I always build crap like that? Cryptolith Rite and Goblin Bombardment and Craterhoof and Purphoros and like, if this description is accurate, I’ve already built the deck. It’s boring how built the deck is. Here is what you probably don’t have enough copies of and I would buy for this deck.

If this is indeed not in the set, it’s going to be in about half of the new decks built with Legendary creatures from the set. I think it’s probably in Commander Legends but I also think sometimes WotC doesn’t know what they’re doing. Training Grounds is like $40, do you think they read my tweets? I don’t think I would do a better job than they are, per se, but when something is obvious to me and all of you and they don’t do it, you have to wonder if it’s because they know way more than us or way less.

$2 on Coolstuff? No way that’s correct.

Finally this popped. I’ve been waiting forever with a box of these. They’re still too cheap.

Look at what goes in Red Omnath decks, while you’re at it. This new Avenger of Zendikar wannabe will be linear and obvious and that means everyone will build the same basic way with the same basic cards. We know what all of the cards that will go in the deck that already exist are because they’re in like a half dozen identical decks. Mina and Denn, Radha, Omnath, Omnath, to an extent, Omnath, etc. Those decks always have Cobra, Avenger, Oracle of Mul Daya, Exploration, Ramunap Excavator, Azusa (cheap as hell right now), Wayward Swordtooth, Tireless Tracker, etc. It’s boring but that kind of deck is fun and I have multiple decks with those exact cards. Why take one apart just to build a new one?

I don’t care about the angel at all, but considering I’ve written like 10,000 words about everything else, who cares?

Maro’s list is way more vague but I think we can still pick out some tidbits.

Let’s go point by point and see if any of it matters in the complete abstract to the extent that we can figure out what to buy.

I don’t know the victory condition so it’s impossible to say. I think it probably has to do with life totals. Check out decks on EDHREC that play cards like Serra Ascendant and Felidar Sovereign, maybe? I’m guessing.

I don’t know what this is, maybe like a reverse Muldrotha? I don’t know, it seems sweet but since I don’t know what you need to do to activate or trigger it, it’s hard to know what to buy. I bet it’s Sultai colors but that’s a guess. Seems awesome, frankly, can’t wait to build the deck. If you read my 75% column on Coolstuff, you know it’s exactly in my wheelhouse.

This all but confirms allies. They nerfed Coat of Arms so it would no longer give each of these creatures +5/+5 for each other creature they shared 5 types with. 5 types means they’re probably short so they can fit on one line, so I’m guessing 2 of them are Kor and Ally, but that’s a guess. This sucks, I thought I’d have more hits.

I assume this is a tribe but I can’t be sure. Alpha’s tribes were pretty boring. I don’t want to devote too much thought to this.

I assume it’s the 2R on Flame Javelin and Reaper King but I’m guessing.

Lands that come with a choice you’ve never had before

I bet this sees play in EDH unless the condition is silly. Mangara is already making an impact.

A card with three different activated abilities that all copy something

Sweet. I don’t know what to buy but I assume this is Temur colors and Kalamax and Riku players already want this without knowing what it is or what it does. It could be a slightly better Mirrorpool after all.

This is the only rules snippet beside “Twice the number of equipment” that caught my eye. I hope it’s not an ability on the Omnath because Red is easily the worst color in the Temur Omnath deck and I generate as little Red as I can get away with. Still, this could make Braid of Fire go nuts.

This is all complete and total speculation, but if you can keep Red mana phase to phase like with Green Omnath, Braid of Fire goes right back t o $30 again. It flirted with $30 already which made all of the $10 copies at every LGS disappear. If it spikes again, it will be harder and faster. If you are feeling ballsy, buy a stack. If you think you will play this ever and don’t want to pay $30, buy 2 copies and when it goes to $30, sell your spare, play with your free copy and pocket $18 for your trouble. Sound good?

Finally, the leaker also said the Legendary crab is a 0/17 that gets +X/-X for each Island you control when you activate it. People are hoping it has Defender because that would be sick in Arcades, but it doesn’t sound like it has Defender, although some crabs do. However, here’s exhibit A in my argument against Defender.

Hedron Crab has 0 power and can still attack. I think instead of looking at Arcades, there’s another commander we should be looking at.

Tap a crab to mill someone for 17, which grows your Wight of Precinct 6 and your Consuming Abberation. It’s stupid and terrible to try and mill people, but doing it for 17 cards at a time in a deck that, if I were building it, runs Intruder Alarm, it seems like it would get there. I think the crab is probably a bad, meme card, but it turns out those sell. They made fake My Little Pony cards and they sold out in minutes.

This is a lot to think about, but I for one think the leaks are credible. I was hoping landfall would be back as a mechanic and I’m glad to see it is. The more we get revealed coming up in the next few weeks, the more we’ll be able to get a bit more granular on our picks but for now, plan for mechanics and decks built around the cards we (assume we) know. That does it for me. Until next time!