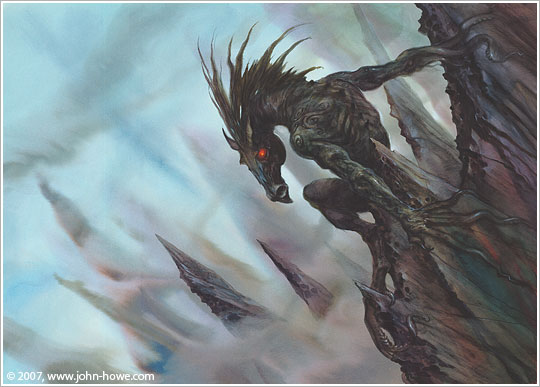 In just a few days, it will have been four months since I started using PucaTrade.  Since then, I have more or less optimized my cube (which was no small task), gotten rid of a lot of junk I didn’t want weighing down my collection, and have spent zero dollars on Magic, aside from shipping, I suppose. It’s hard for me to overstate just how much use I have gotten out of this service in such a short time. If you’re not on board yet, you’re making a serious misplay.

This isn’t going to be a basics-of-PucaTrade style article. There have been plenty of those written, and the site is easy enough to use without me explaining it. Instead, I’ll be discussing some more specific strategies for using the platform to your advantage, as well as anticipating the best ways to adapt to several known updates that are already in the works.

If you only see my summary on the site, then it looks like I haven’t done too well using PucaTrade:

Of course, that doesn’t tell the whole story.

Now things are looking much better. In my opinion, there is little point to being on PucaTrade if you aren’t able to request cards at a moment’s notice. For this reason, I never like to dip below 10,000 points, and in practice, I haven’t been under 20,000 points often at all.

In many ways, PucaTrade has become my primary way to attain cards, and I don’t want to miss out on good opportunities because I’ve spent all my points. If you’re a player needing to build decks at a moment’s notice, keeping a healthy supply of PucaPoints on hand is a great way to get the cards you need.

Another great benefit here is that I’ve shipped many cards that I expected were going down in value. In my article last week, many of the “sales” I discussed in anticipation of Modern Masters 2015 were, in fact, PucaTrade sends. If I had been trading these out at my LGS or a big event, I would have needed to find cards to receive in return, many of which would be less than ideal and not much better than what I was trading out. With PucaTrade, I was able to lock in value while I could, and have been storing that value for use at a later time. It’s glorious.

The Rhino in the Room

Of course, I’m well aware that letting this currency sit without gaining interest is inefficient. I could pick up over 50 Siege Rhinos with my current bankroll, and unless it gets included in a Duel Deck or something (what a gross thought), by the fall, I will almost certainly have made a hefty profit in either PucaPoints or cash—my choice. I am certainly picking up a dozen copies of a card here and a playset of a fringe spec there, but I still like to keep a good amount of points on hand. Besides, liquidating a huge pile of the same card through PucaTrade is not exactly easy, and things have to line up a lot better to make a profit buylisting.

The thing is, despite using PucaTrade as my primary MTG bankroll for the last few months, I have another reason to accrue points, and it relates to PucaTrade’s IndieGoGo campaign from a couple month’s back. Here’s the relevant section:

I’ve been a #mtgdad for almost a year now, and I’ve learned two things about it during that time:

This means that I haven’t been playing nearly enough Magic in the last several months, and I don’t see my situation changing anytime soon. I continue to insist that Draft is the epitome of Fine Gaming™ (like fine arts, fine wines, fine cheeses, etc.), but because MTGO offers no way to play meaningful Limited games quickly, I think I’m going to have start looking into Constructed if I want to play more Magic within my current constraints.

I’ve messed with Standard, Block Constructed, and Pauper on MTGO in the past, but have not enjoyed them enough to do more than dabble and then taper off. What really catches my attention is Vintage.

Conveniently, MTG Goldfish’s metagame page lists the exact online prices for the top decks in the format. Ignoring Dredge and Workshop—because when I say I’m interested in Vintage, what I really mean is that I’m interested in playing Ancestral Recall and Time Walk—I can see that I will need roughly 700 tickets. This isn’t so bad when you consider these same decks are listing  at around $15,000 in paper!

Still, this means that I’ve got some catch-up to do if I want to be on top of a Vintage deck when these PucaTrade updates go live. I’m also looking into the Facebook group dedicated for PucaPoint/ticket exchanges that Douglas Johnson mentioned in his article last week, as this was not a group of which I was previously aware. Maybe I won’t have to wait for PucaTrade’s updates, after all.

In my first article for MTGPrice, I pointed out that once you have a decent collection of cards together, you have a very liquid asset that you can use for any of your MTG needs, making playing for free—or at least not spending additional money—quite attainable for the average player. In this case, my goal is to play Vintage without spending any additional money (again, disregarding stamps and envelopes), and I’m sure I can do it. One of the greatest benefits to PucaTrade, especially once MTGO trading is added, is that you can turn your collection into anything you want it to be.

Perfect for Those Cards

I’ve touched on this before, but I feel like it’s important to point it out again because it’s such a crucial aspect to PucaTrade. I have speculated on many a card that has panned out, but only just.

For example, I’m pretty deep on Steam Vents, but unfortunately, got most of my copies for $8 each (in store credit) before the Dragon’s Maze reprint was announced. I traded for plenty more copies at $6 or $7, but I generally don’t like the idea of selling them for less than $8.

Currently, the best buylist price is at $7.40, but the retail price is closer to $13. The eBay average is $8, which means I would be losing money after fees. Without PucaTrade, this would just be a spec I had to sit on and hope would eventually pan out a little better, or occasionally find someone at my LGS who wanted to trade for a set. Instead, I’m shipping these out for more than 1300 points each at a slow but steady rate, storing that value for other speculation targets, cards for my collection, or eventual online Vintage.

Dealing with a card’s spread (the difference between buylist prices and retail prices) is one of the biggest obstacles to profit for a non-store-owning financier, but PucaTrade gives a new and very important out for specs that are mild successes or even failures. Previously, the choice was largely between selling at a loss or continuing to hold and hoping for further increases, but with PucaTrade allowing you to get what essentially amounts to the card’s full value in store credit, a whole new world opens up for outing these types of specs.

Following along with PucaTrade’s blog is a great way to keep up with what updates are coming up. You also get great MTG market theory, like this gem from a recent update:

PucaTrade has taught me that Magic is fundamentally a game of excess supply.  Whether you participate in a draft or buy a booster box to crack open, Magic cards enter your collection as random assortments that you may or may not want.

Part two of this article discusses PucaTrade’s approach to solving one of the service’s biggest problems: the difficulty of sending out popular cards, especially from Standard-legal sets. I won’t rehash it, but basically, they’re testing a “dibs” system this summer. It’s definitely worth a read.

By knowing that the dibs system is coming, you may decide that you are more comfortable committing some capital to Standard cards. Or maybe the fact that it may prove temporary will make you want to move into cards that not everyone will be looking to send. When I see an announcement that MTGO trading is coming up soon, that will give me a little extra time to have the points ready to get those Vintage cards I’m coveting. Paying attention can help you be ahead of the curve in many ways.

I’m really proud of the section header above, because I’m using it both to indicate that we’re approaching the end of this article, and also to reference a frequent criticism I hear about PucaTrade. That’s efficiency right there, folks.

Invariably, any time someone writes an article about PucaTrade, someone will comment saying something like, “I would never put my cards into something like this. They could just pull the plug any day and then everyone would just lose all their points. This is obviously a scam.”

Look, I’m all about being risk-averse. And you’re right, PucaTrade could close down. But considering more than one million trades have been completed and there’s apparently more users active than ever, I don’t imagine a world where PucaTrade will close down, at least any time soon. Frankly, the service has already proven more reliable and personally valuable to me than MTGO, and now I’m on record as being willing to put in several hundred tickets towards a Vintage deck on that unreliable, bug-ridden joke of a client. If you have any kind of collection at all on Magic Online, any criticism of PucaTrade as a risky proposition is willful obfuscation of your true concerns, whatever they may be.

If you want to use all the tools in the financier’s toolkit, you’ve already taken the right step by signing up as a ProTrader here at MTGPrice. We can provide the data and the community you need to make the correct decisions in your Magic finance pursuits.

But if you haven’t signed up for PucaTrade yet, you are missing out on what is in my opinion the finest medium for exchanging Magic cards for other Magic cards that is available. That’s just my opinion, though. You should check it out for yourself to know for sure.